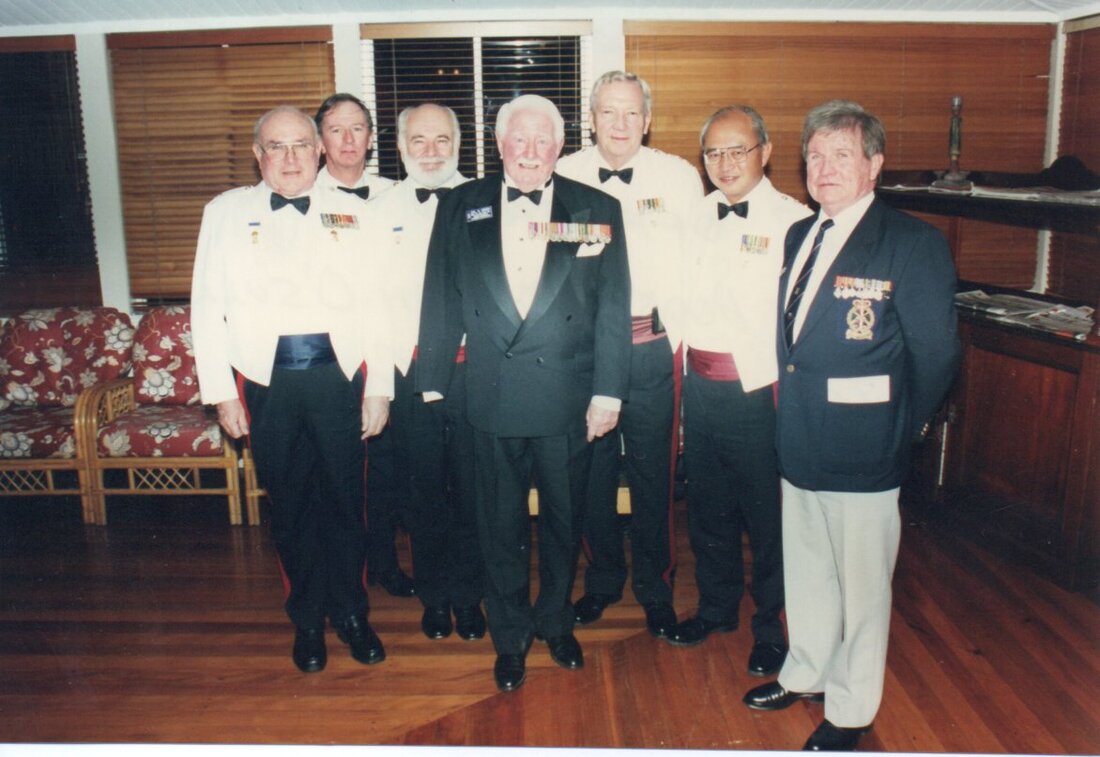 The first dining nights were held at the Army base at Oakey where then Maj Peter Rogers DFC and WO Terry Egan DCM were stationed with the Aust Army    Aviation Regiment. They were the initial Association “get-togethers” rather than Dining Nights, but served to create the formation of the Association.


When Maj (Ret) Bob Collins came from Melbourne to Brisbane in 1996 and realised that the Association had been formed, he, together with WO1 Joe Fisk, commenced to organise formal mixed Dining Nights at Victoria Barracks Officers Mess, Brisbane. They were held there on an annual basis for a number of years before moving to the United Services Club in Brisbane where they continued until rising costs became a problem. 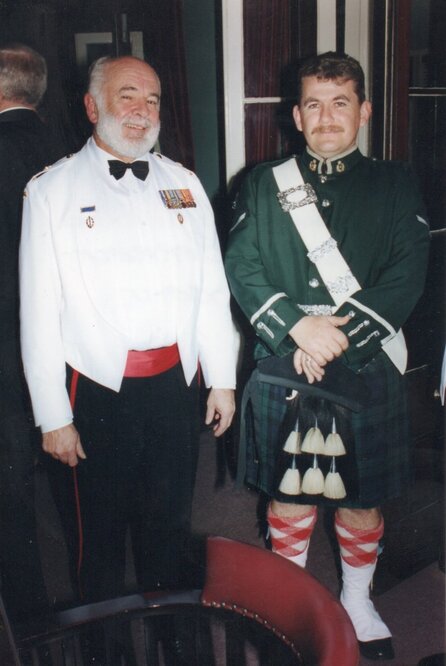 Bob Collins and the Piper prior to the dinner
Over the years two Mixed Dining Nights were held at the Greenbank RSL Club.  One of these was held in 2014 to commemorate 75 years of the formation of the New Guinea Volunteer Rifles. 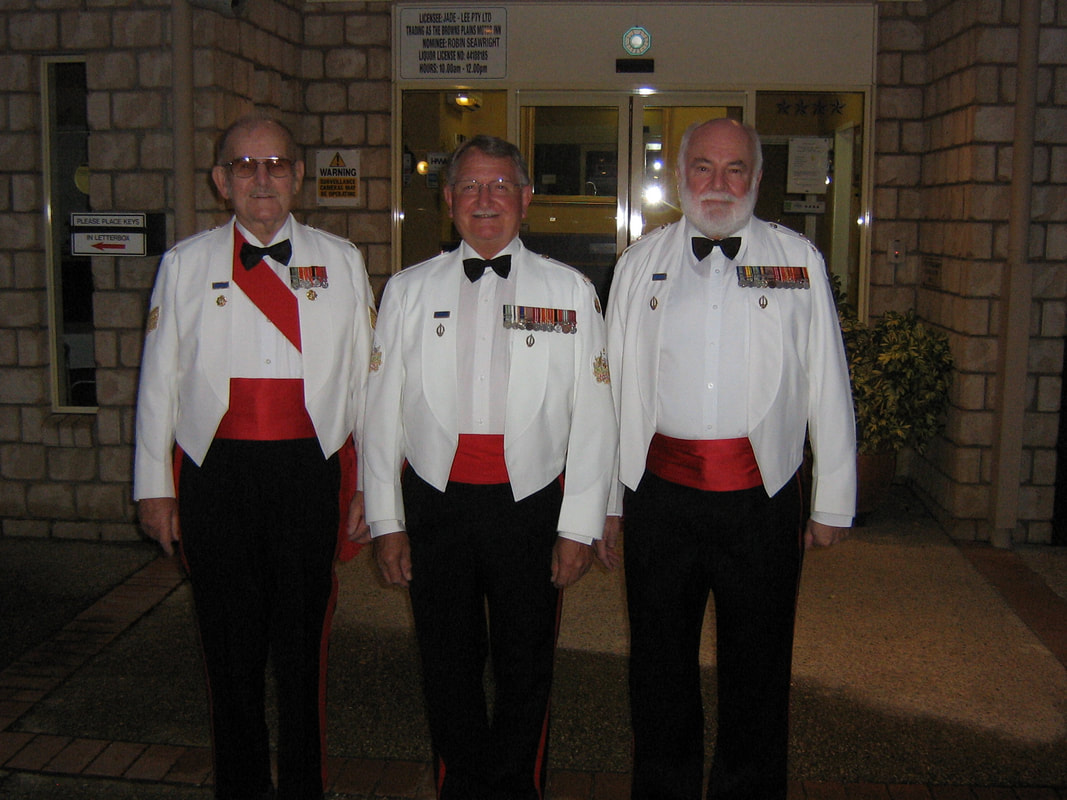 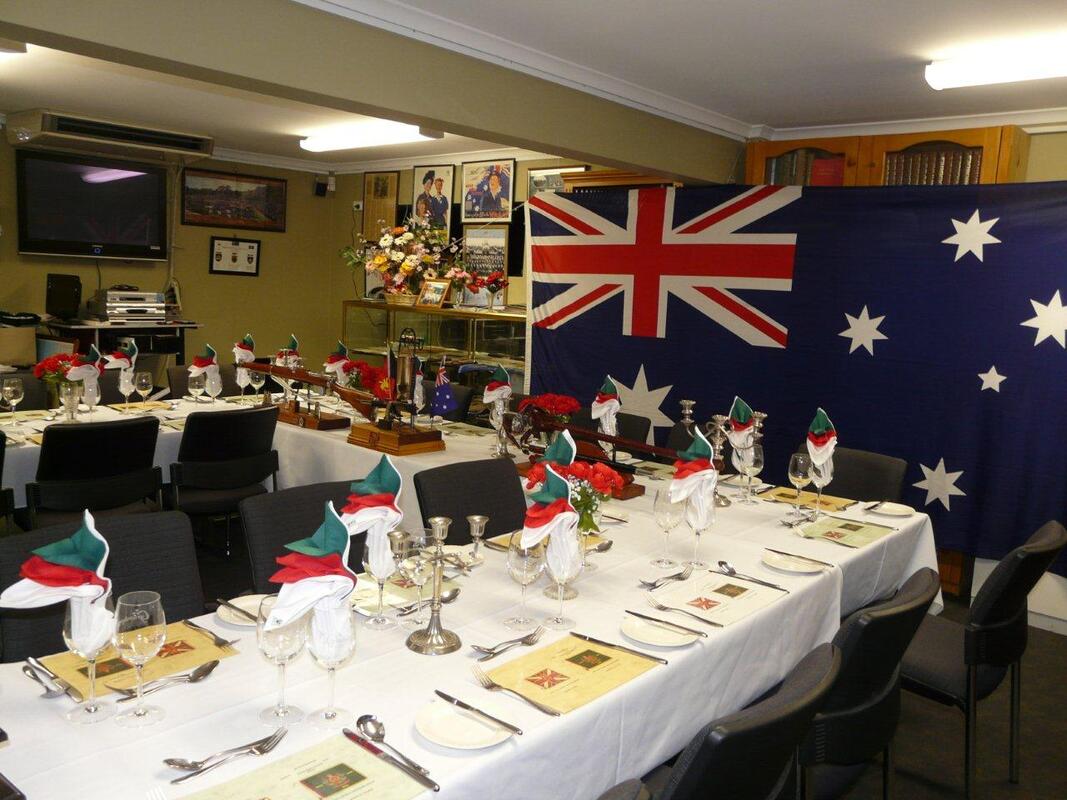 Above.     The setting for the Greenbank Formal Dinner in honour of the NGVR 80th Anniversary of going into battle.
​Below.   Some of the attendees at the dinner. 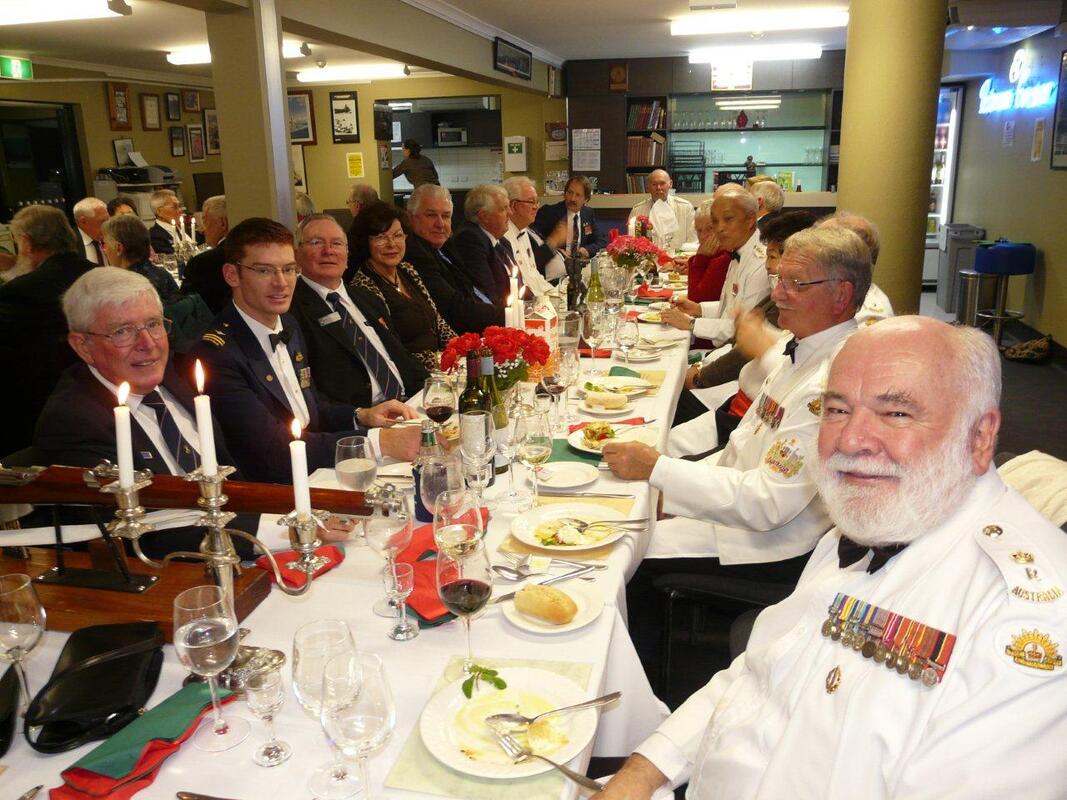 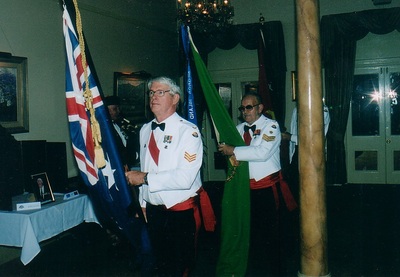 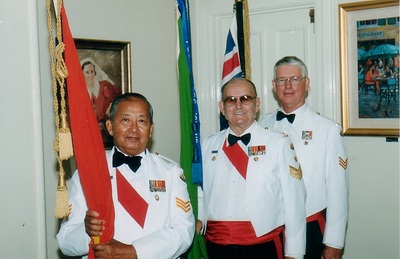 HISTORY OF THE MIXED FIELD DINNERS

In March, 1999, four members of the Association, Joe Fisk, Barry Wright, Norm Mundy and Bob Collins, held a camping week in the mountains behind Beenleigh.  During the course of one dinner, for which the table had been set with Candelabra and white tablecloth, the matter of having ladies attend a similar future dinner was raised.

At the time the Assn was conducting an Anzac Day formal dining night at Victoria Barracks, organised by Bob Collins, but the feeling was that these would eventually become too expensive and a cheaper alternative was needed.

Bearing in mind that this was raised late in the evening, after a number of wines and ports, so the discussion ranged over a wide range of styles, venues, formats etc.  It was recognised that, if these dinners were to eventuate successfully, an area large enough to accommodate the dining marquee and annexe, parking facilities for guests, cooking and ablution facilities for those setting up the marquees would also be required together with camping facilities for those intending to camp overnight. Only a couple of weeks later Joe, Barry and Bob took a camping trailer down into Barry Wright’s backyard – he has 15 acres almost 7 ha..  Barry received quite a surprise when it was pointed out that here, in his own back paddock was there a suitable area.

From that moment on, work commenced on clearing space for the building of a kitchen, toilets, shower etc.  Over the years these were improved on, some 600+ ornamental plants, shrubs and flowering bushes planted and couch grass grown where required.

For the first dinner everything except the tablecloths was hired.  Over the next 10 years any profits from the dinners went into purchasing crockery, glasses, tentage, etc., and in improvements to the area – kitchen, shower, toilets etc., until everything was owned.  The State Emergency Services were most helpful in the early days and loaned tentage, chairs etc.  With the purchase of, and recovering of our own chairs nothing was then required from SES.

The dinners were held in a large marquee with tables set up in the traditional U pattern, white tablecloths and candelabra utilized and a Spit Roast is used for the meals. 25 dinners were held under canvass with the largest gatherings in June 2009 when 62 members and guests attended and in 2011 when 68 attended.  Regular working bees were held at the site to ensure that all facilities were maintained and various improvements built as required.  Running water was available in several sites and electricity was connected on a selective basis.  Hot water was available.
​
The extensive work required prior to and after a field dinner eventually became too much for the ageing members and in 2012 the venue was moved two doors away into the spacious house of Ted and Heather McAllan.  9 dinners were held there until, owing to the age of the organisers, the final dinner was held in October 2016.
​
The following appeared in Harim Tok Tok issue 23m June 2002

Venue:-    If  coming  from  Brisbane,  follow  the  Mount  Lindsay  Highway  (  Beaudesert  Road) through Jimboomba, turn left approx 1 km past Jimboomba into MILLSTREAM ROAD, and then after  150  M  turn left again into  Kurrajong Road.   At the  top  of the  crest  approx  1  kin along Kurrajong Road, between two 80 km speed signs ( one of each side of the road) turn left into a long driveway.  The venue will be  suitably marked.  The  site is some  600 in into the property. Look for the signs.

Shower facilities, with running hot and cold water will be available. Separate ladies and gents conveniences are available. Electric lighting is also available.

So that those dining can feel free to have a good time, Pam & Barry have made available their back paddock  ( where the theme night is being held)  for camping. There are  suitable  cooking facilities,  fire  places,  hot  water  and  cooking  utensils  available.  Those  staying  for  Sunday breakfast please bring your own food, drink, cutlery etc, and don't forget a comfortable chair for your camp site. 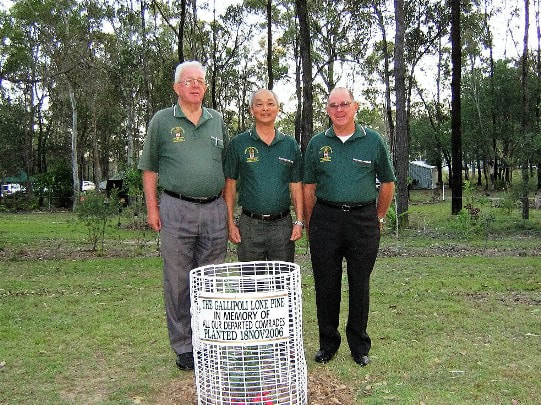 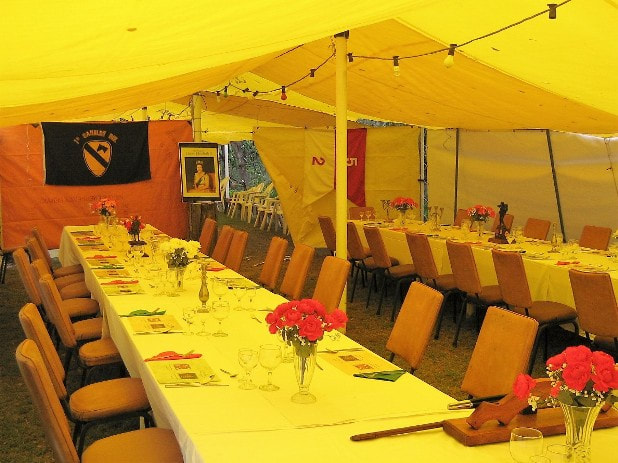 Setting up for a Field Dining Night 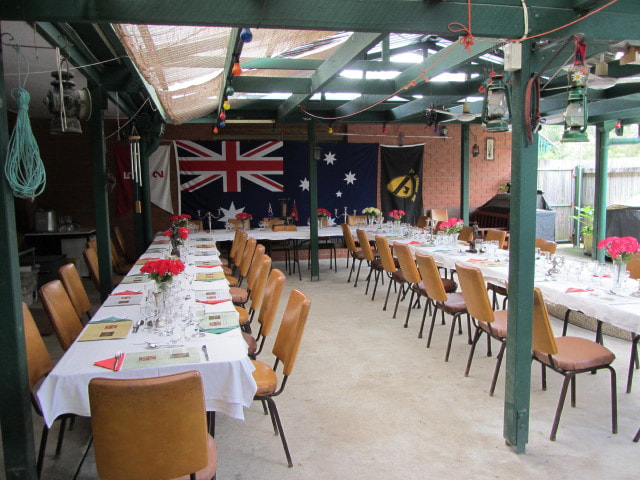 Dining Night set up under cover. 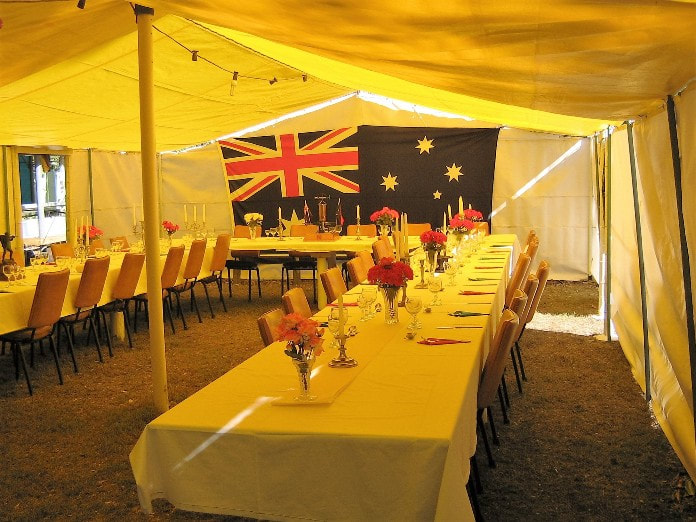 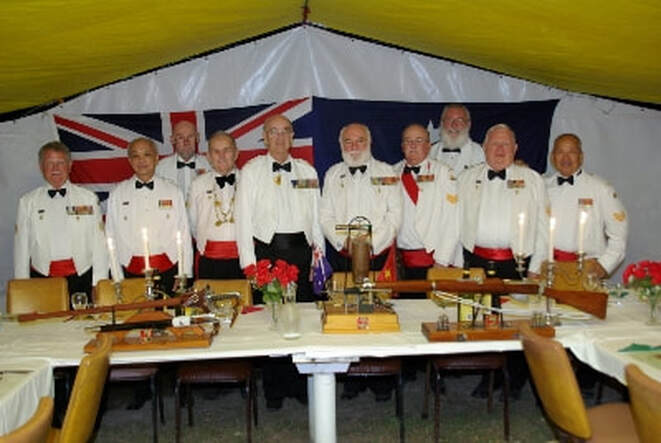 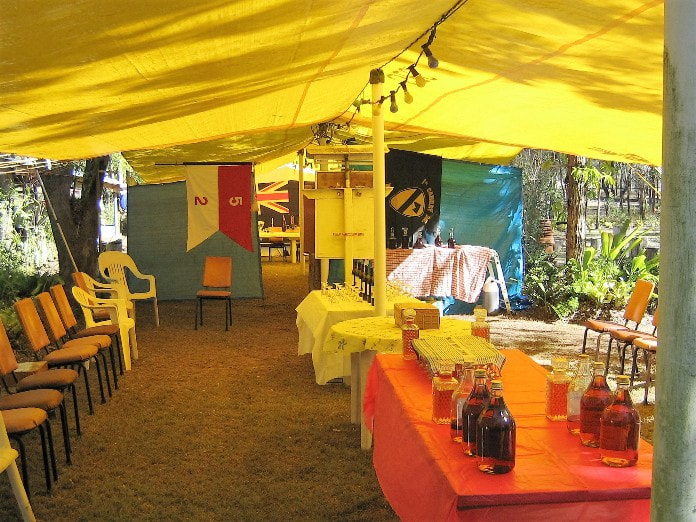 Ante Room prior to the Dining Night 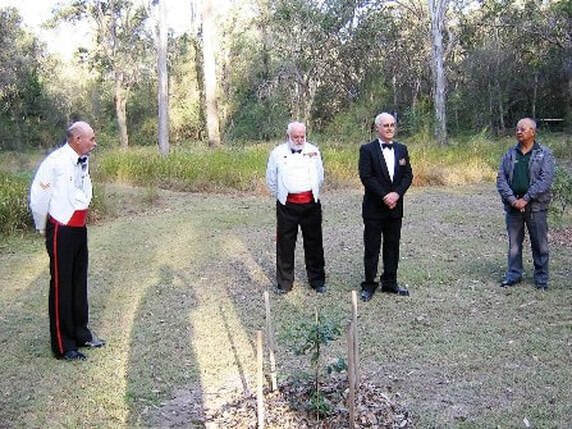 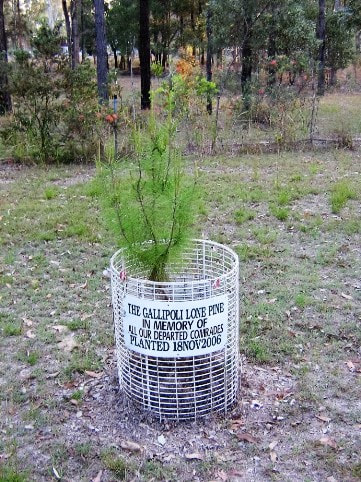 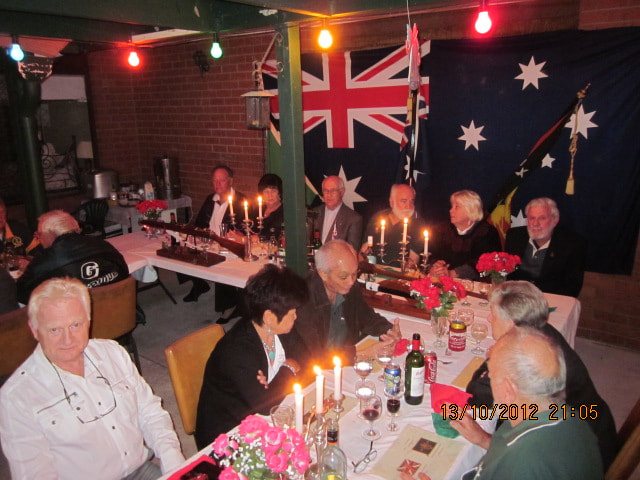 A dinner at Jimboomba. 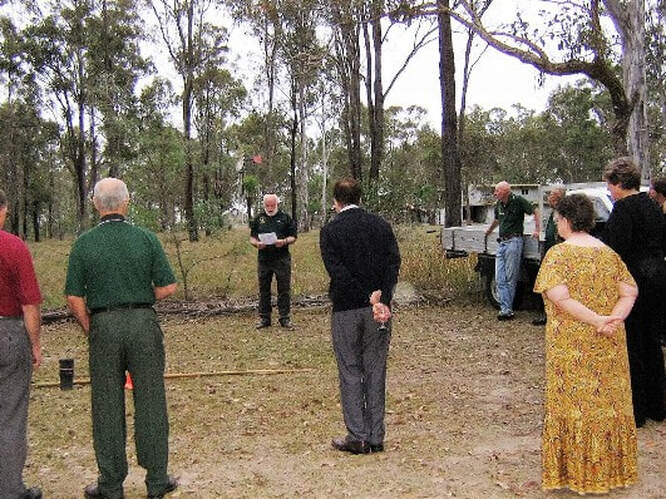 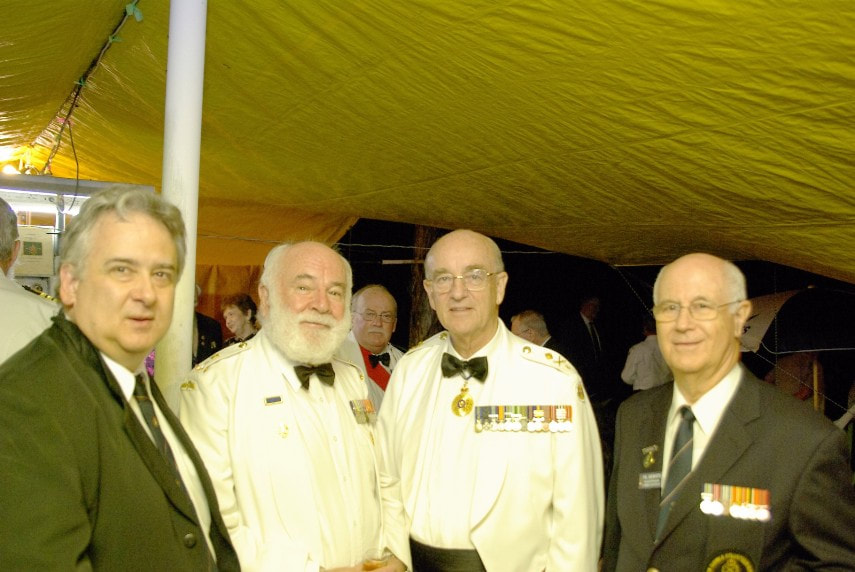 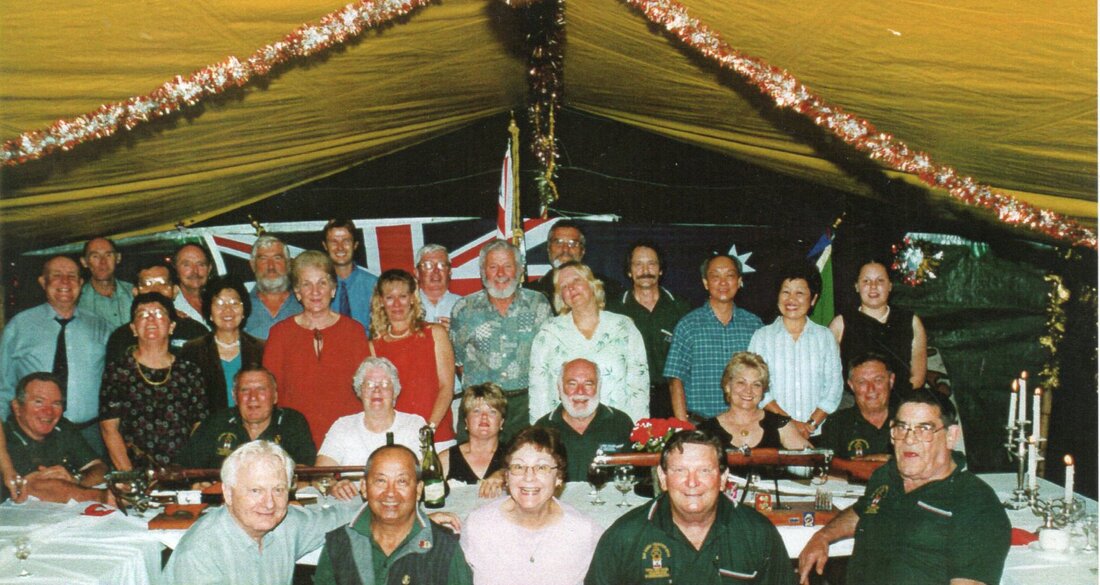