During 1942 NGVR depots in Rabaul, Kokopo, Lae, Salamaua and Madang were occupied by the Japanese.
Therefore there are very few photos available from those areas and those available are below.
As the depots at Wau and Bulolo were never occupied there are a lot more photos available from those areas and hopefully we will be able to obtain some photos of NGVR activities in the Markham Valley, where the Lae NGVR withdrew to and continued to operate against the Japanese, in due course.  If so they will be displayed on this page.
​
There is a separate page available for NGVR during WWII in the Lae, Bulolo areas. 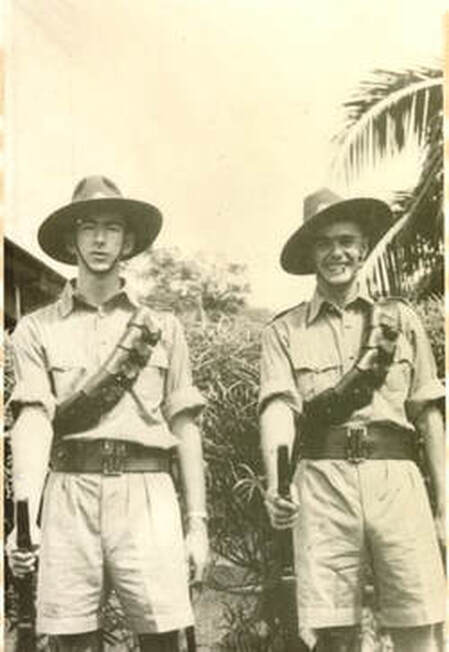 ​NGX513 Rifleman Lineker Johnston, New Guinea Volunteer Rifles, (on right) and an unidentified soldier (left). Johnston, an employee of the Bank of New South Wales, Rabaul, was was taken prisoner of war (POW) following the Japanese invasion of January 1942, and held at Rabaul. On 22 June 1942 Rifleman Johnston was one of an estimated 845 POWs and 209 civilians who embarked from Rabaul aboard the Japanese transport ship MV Montevideo Maru.
​
​The ship sailed unescorted for Hainan Island. On 1 July 1942 all the prisoners died when the Montevideo Maru was torpedoed by a US Navy submarine, USS Sturgeon, off the coast of Luzon Island in the Philippines. In January 1946 The Argus reported his death and noted that a letter from him had been included in a number which had been dropped [c 1942] over Port Moresby by the Japanese 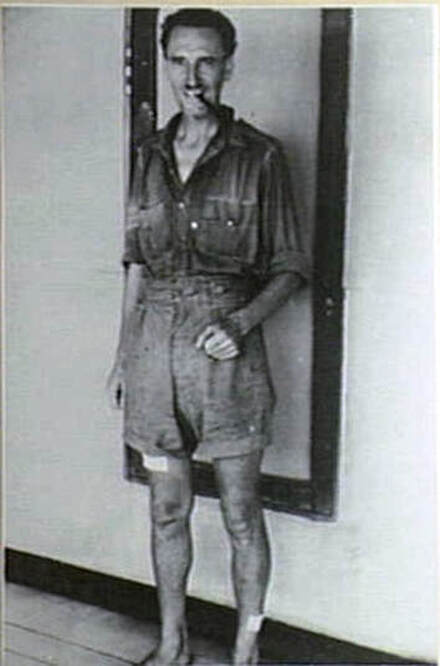 ​PORT MORESBY, NEW GUINEA. 12 APRIL1942. NG22 SERGEANT S. COSTELLO, NEW GUINEA VOLUNTEER RIFLES, AN ACCOUNTANT OF RABAUL IN PRIVATE LIFE, ONE OF THE EVACUEES WHO WAS SUCCESSFULLY RESCUED BY THE HMAS "LAURABADA" FROM PALMALMAL, PHOTOGRAPHED ABOARD THE RESCUE SHIP.
​ 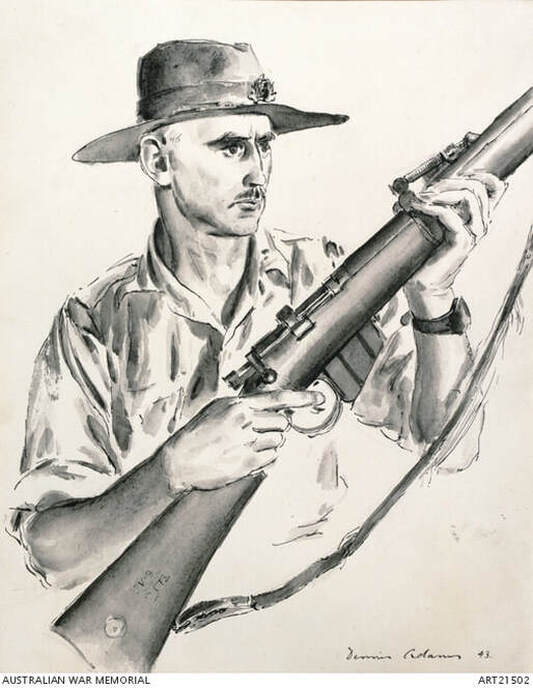 NG 239 (NGX450) Private - later Lt Leslie John Leslie Stokie, New Guinea Volunteer Rifles, drawn a few days after his rescue by Catalina Flying Boats from New Britain where he had had amazing adventures during his sojourn on the Island under Japanese occupation. This sketch shows his original "hat, fur felt". The brim had become separated from the crown but using an old cuff from some drill trousers as a hat band he sewed them all together with twine from the webbing sling of his rifle.
​
John Stokie was later awarded a Military Cross for his Coastwatching efforts on New Britain. 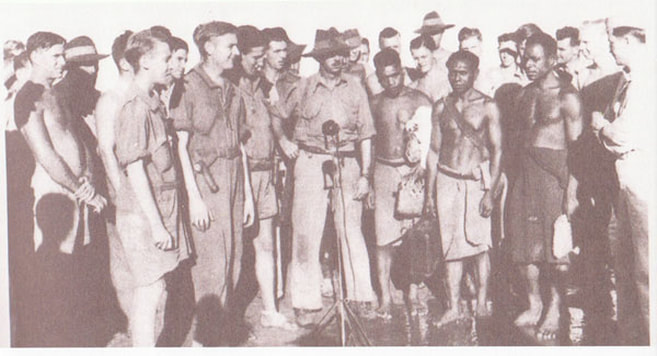 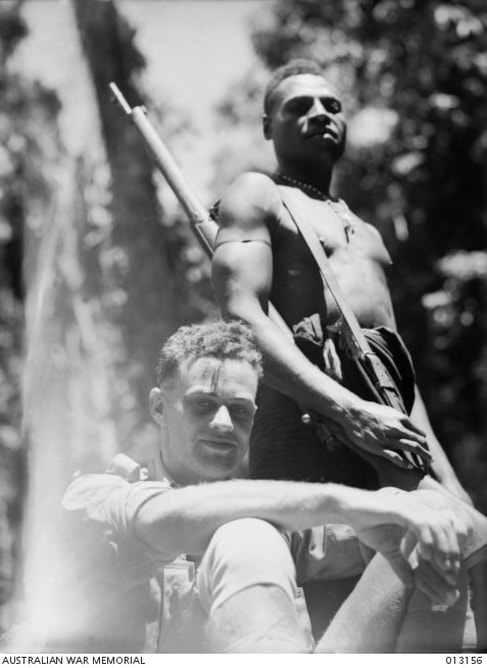 NG 2390 SGT GEOFF WHITE, NGVR, in charge of native labour on the Salamaua front, with his native boi, KUMU. 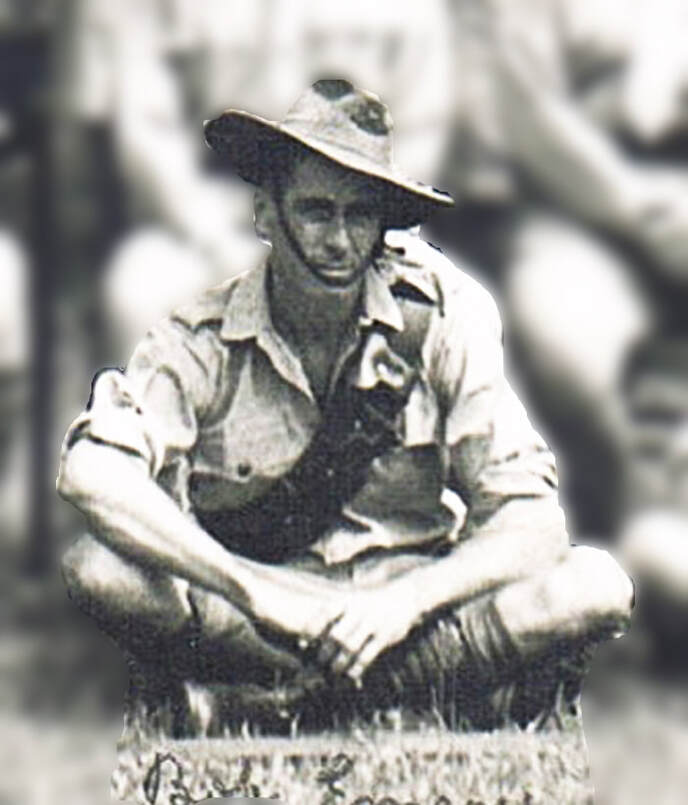 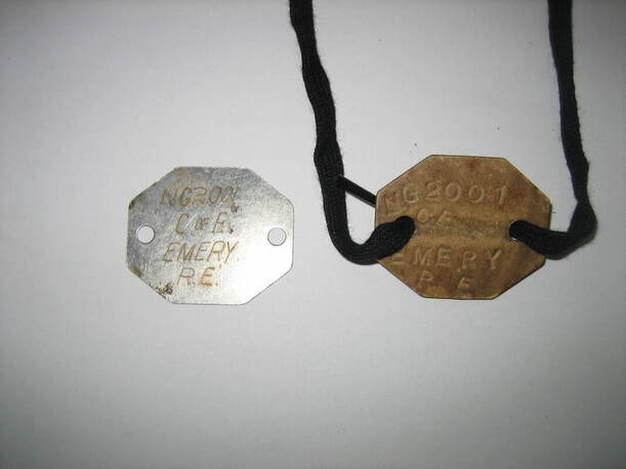 Bob's story can be found in the book 'Keepers of the Gate'  -  see "suggested reading/viewing." 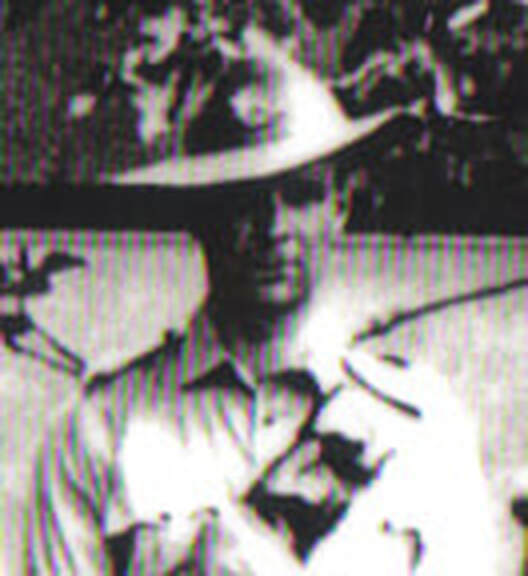 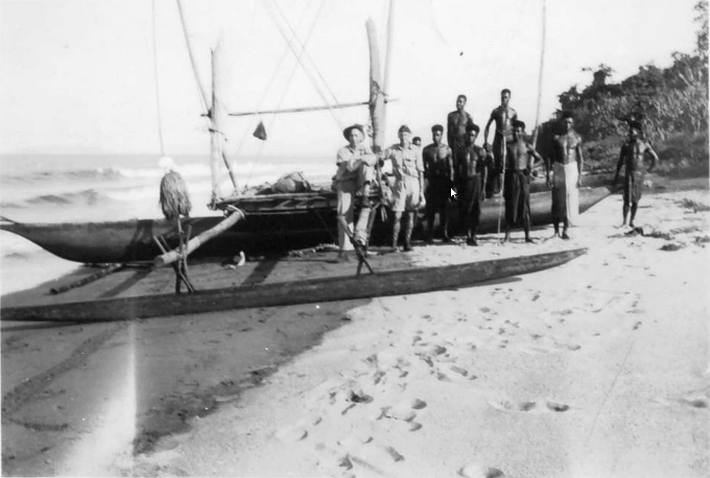 1942.  NG2243 Sgt Gilbert Stuart Robertson setting off from near Salamaua on a 'scouting expedition' 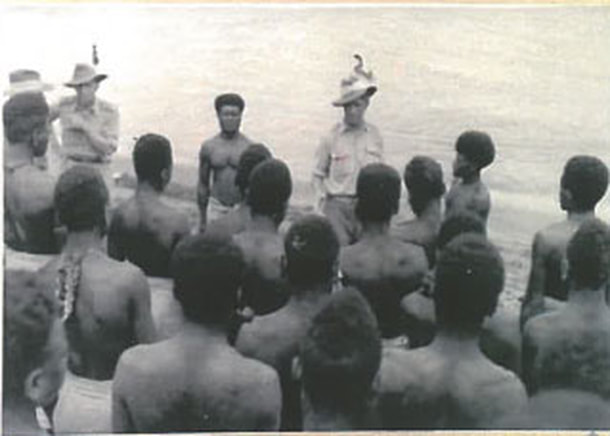 NG2110 NGX360 Sgt Thomas Albert (Tom) Keenan at Cape Hoskins, New Britain.  Tom is now with ANGAU and, with his two  'boss bois' is giving instructions for the natives work that day with the 36th Battalion. 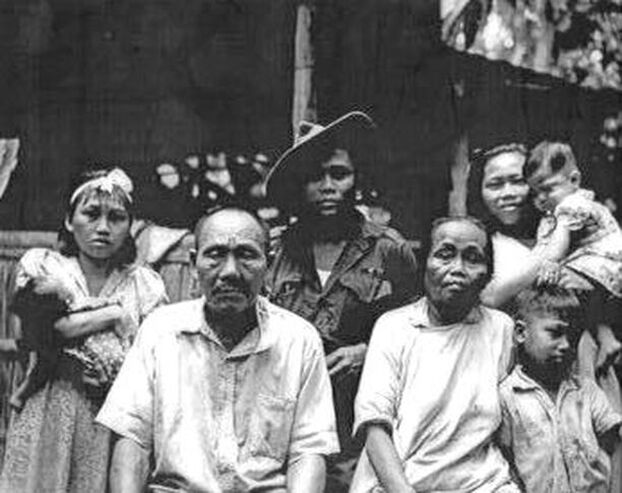 ​NG2448 Pte hui Hong Wong back in Rabaul with his family after the war.
He was one of only 4 Chinese who actually joined the NGVR.  He did so in Wau and one would suspect that it was because he was a professional chef and spent his war as a cook both in New Guinea and Australia.  He must have been a good cook as most of his postings were to Officers Messes.
​
He went back to Rabaul, New Guinea, shortly after the Japanese surrender to ensure that his family were safe. They had remained in Rabaul during the war.
He was posted to the Australian Army Hospital in Rabaul as a cook in the Nurses mess. 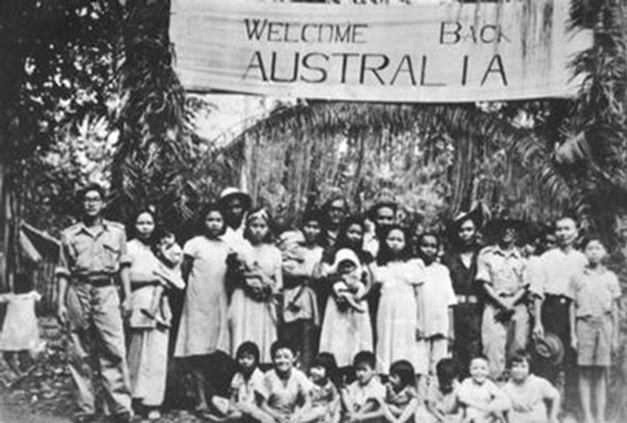 Shui Hong Wong (in slouch hat) with some of the Chinese population of Rabaul in a welcome to Australian troops arriving in Rabaul after the Japanese surrender.

His full story is told in "Keepers of the Gate"