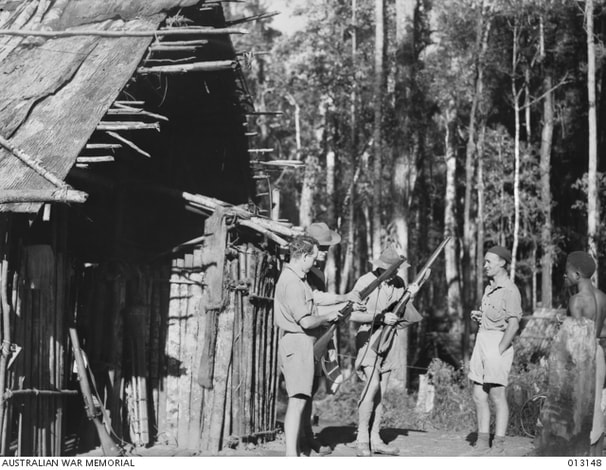 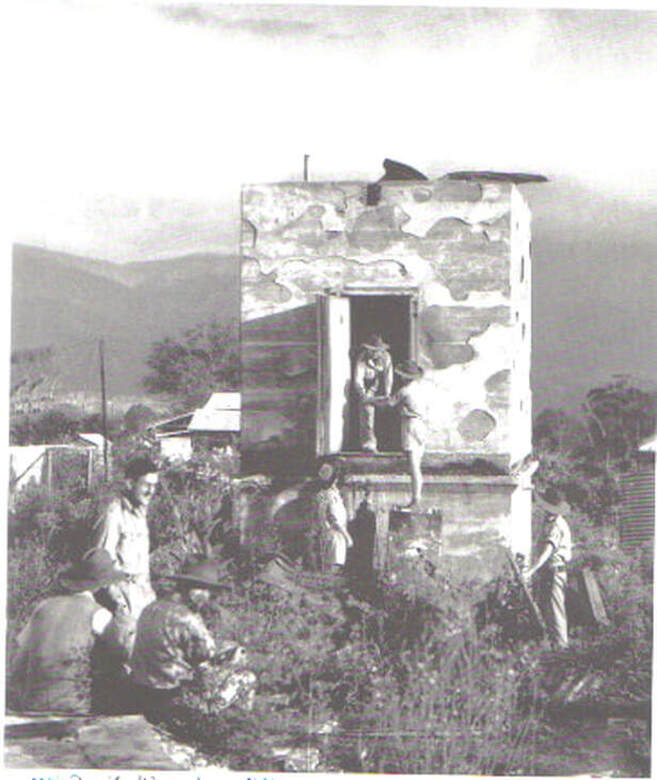 When Kanga Force needed funds to pay for carriers, labourers and food the Manager of the Bank of New South Wales, A.J. (Bossy) Byrne (NGVR), was flown back to Wau from Port Moresby.
​
Together with NGVR member, Cpl Horace (Horrie) Harris, the former teller at the Bank of New South Wales, they opened the strongroom, which had survived the bombing of Wau and took out thousands of pounds in shillings. 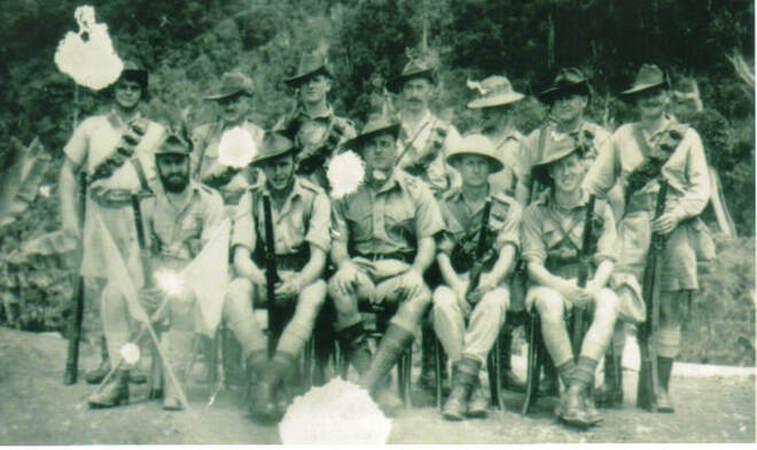 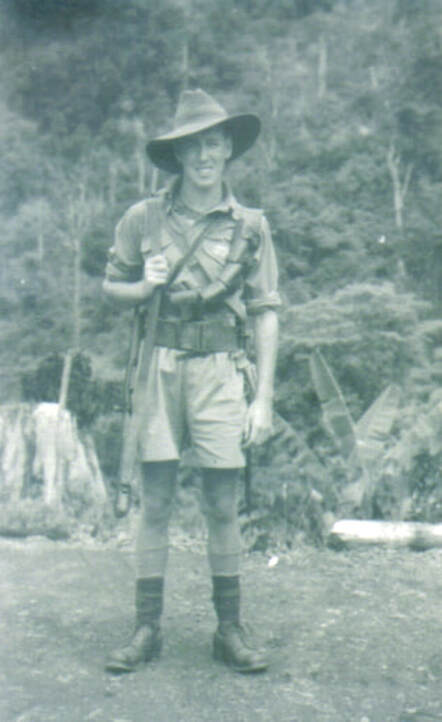 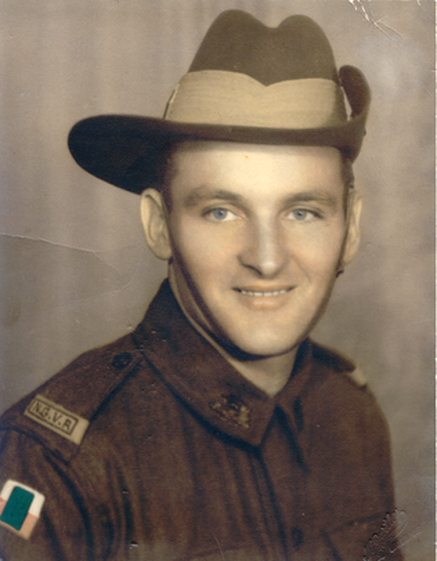 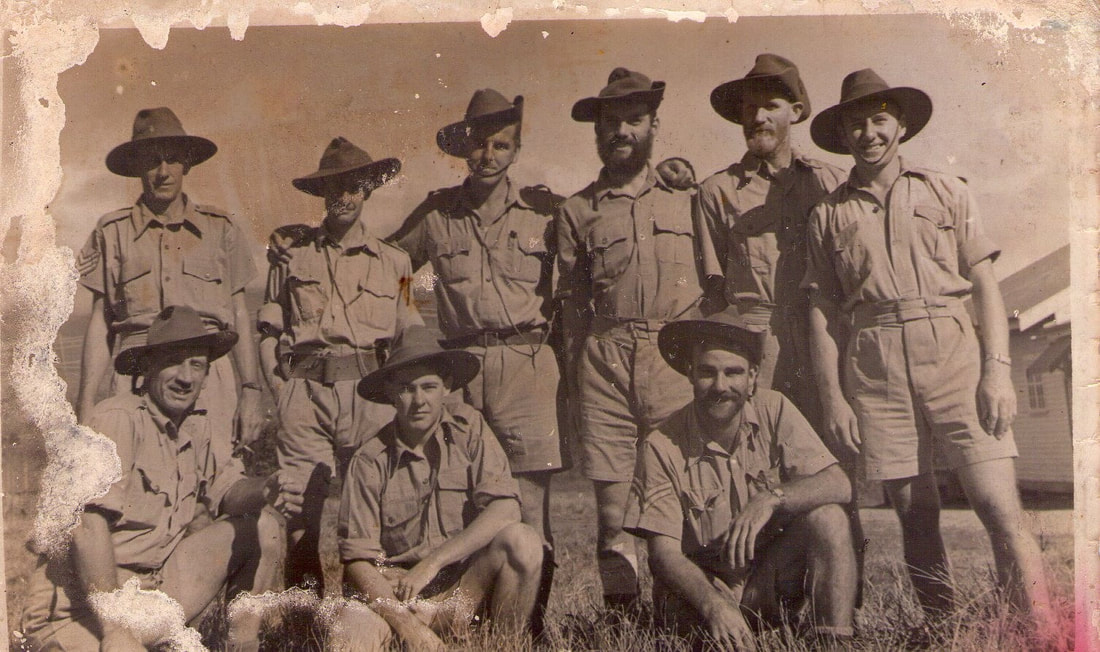 At a committee meeting in Ipswich in September 1997, Tom Legga was handed a photo and asked if he recognised anyone in the photo. "No trouble" he said. "I could name all the members of this NGVR group."

"This photo was taken in Wau 1942 where we were resting up after the battles of Salamaua and Mubo. We had not had any substantial food between March and June 1942 as not enough food had been coming over the Bulldog Track. Airdrops from DC3's were just coming into their own but the drops "freefall" and most of the supplies were damaged or blown away in the aircraft's slipstream and lost in the surrounding jungle.

A summary of the men involved is as follows:
I think today there are only three or four of this original group still alive"
(Photo courtesy of Stewart Lewis) This article appeared in The Assn Newsletter in November 1997.

Brian Fraser took part in the attack on Salamaua and, when NGVR was disbanded, joined the RAAF.  He went to the United Kingdom and was killed in his first bombing raid over Germany. (Bob Collins) 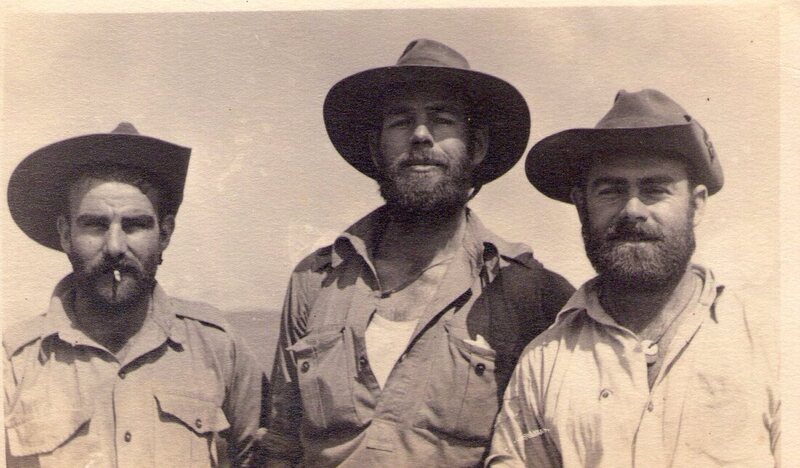 NG2336 Rfn Alan K Dunwoodie had this to say about beards: "It was at Mubo that we were ordered to shave. We thought it was a bit of a silly order so we then indented for razors, razor blades, shaving soap and mirrors etc. Naturally the supply system could not supply these so the order was just ignored.”​ 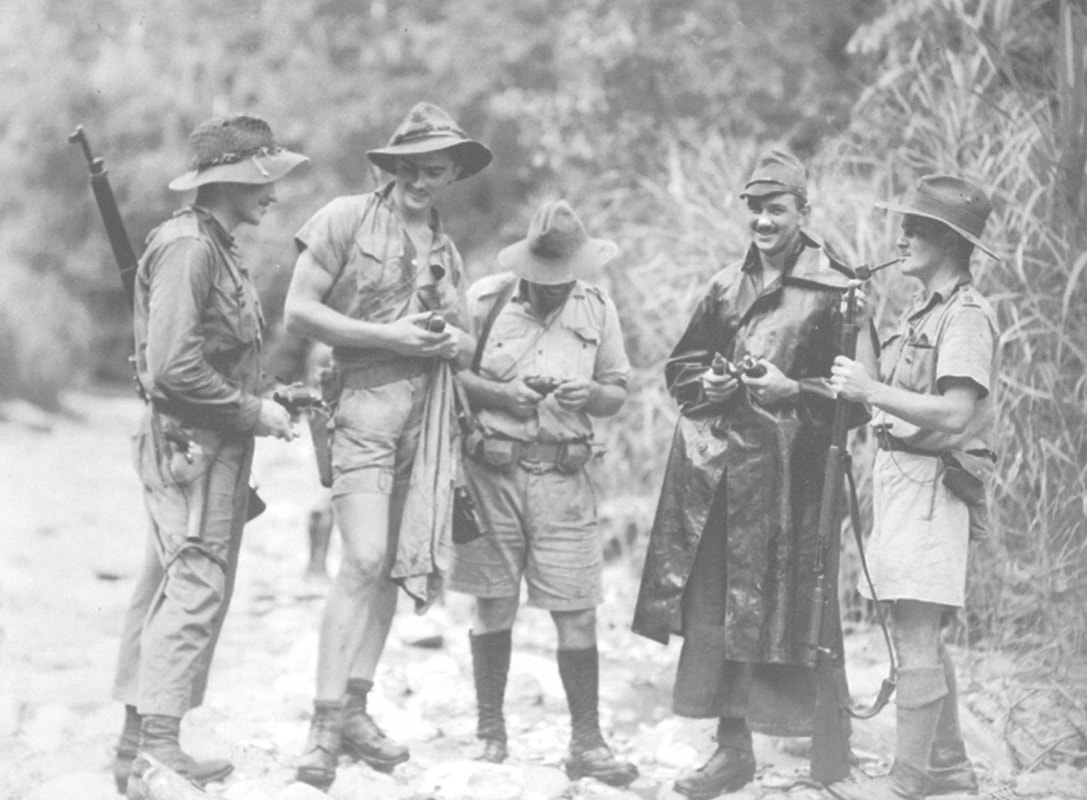 ​An interesting observation about this photo. At least two on the men are carrying Japanese Arisaka rifles, the man on the left is carrying a Japanese pistol and most of them are holding Japanese hand grenades. The man second from the right is possibly wearing a Japanese cap (and raincoat?).
​ 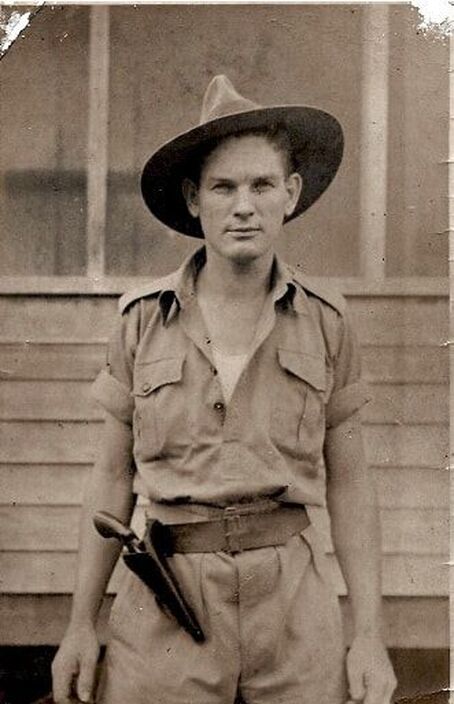 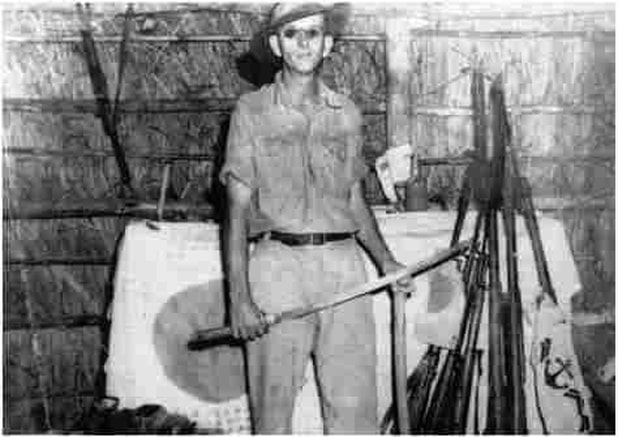 ​NG 2422.  NGX418. Sgt Neville Charles Swanson at Cape Gloucester, New Britain, 1944, with the US 1st Marine Division.
Neville was a great souvenir collector and here he is with some of his Samurai Swords and Japanese rifles and bayonets. 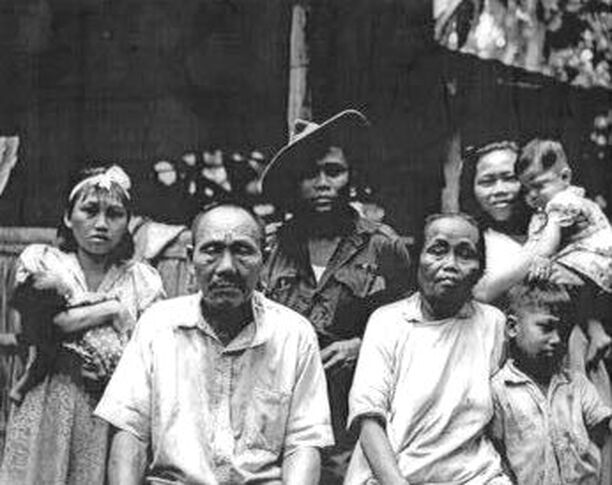 NG2448 Pte hui Hong Wong back in Rabaul with his family after the war.
He was one of only 4 Chinese who actually joined the NGVR.  He did so in Wau and one would suspect that it was because he was a professional chef and spent his war as a cook both in New Guinea and Australia.  He must have been a good cook as most of his postings were to Officers Messes.
​
He went back to Rabaul, New Guinea, shortly after the Japanese surrender to ensure that his family were safe. They had remained in Rabaul during the war.
He was posted to the Australian Army Hospital in Rabaul as a cook in the Nurses mess. 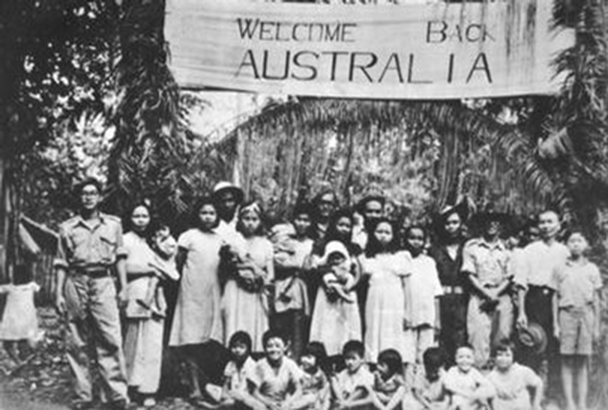 ​Shui Hong Wong (in slouch hat) with some of the Chinese population of Rabaul in a welcome to Australian troops arriving in Rabaul after the Japanese surrender. 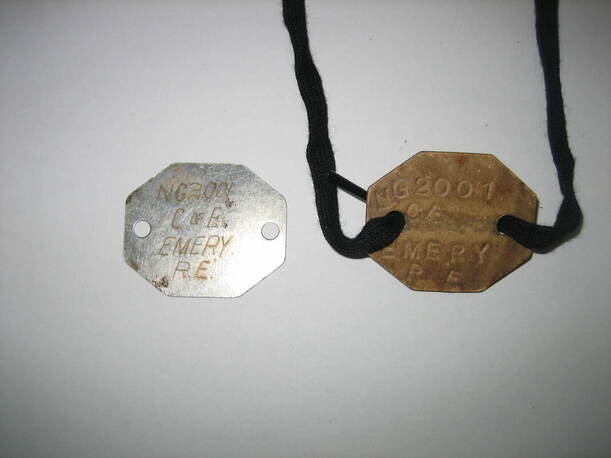 Bob's story plus the stories of Father John Glover (below) and Neville Swanson, George Cockram and Alan Dunwoodie and Shui Hong Wong (above) can be found in the book 'Keepers of the Gate'  -  see "suggested reading/viewing." 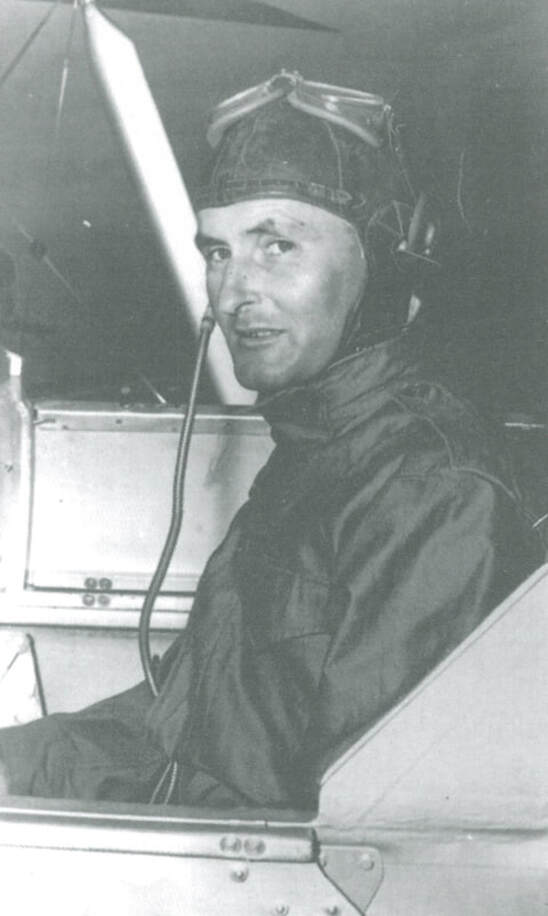 ​NG 2460. NGX 304 Father John Glover who flew light aircraft in the New Guinea Goldfields and Highlands.
​In December 1948, Father Glover crashed his aircraft landing at Mingende and was killed instantly. 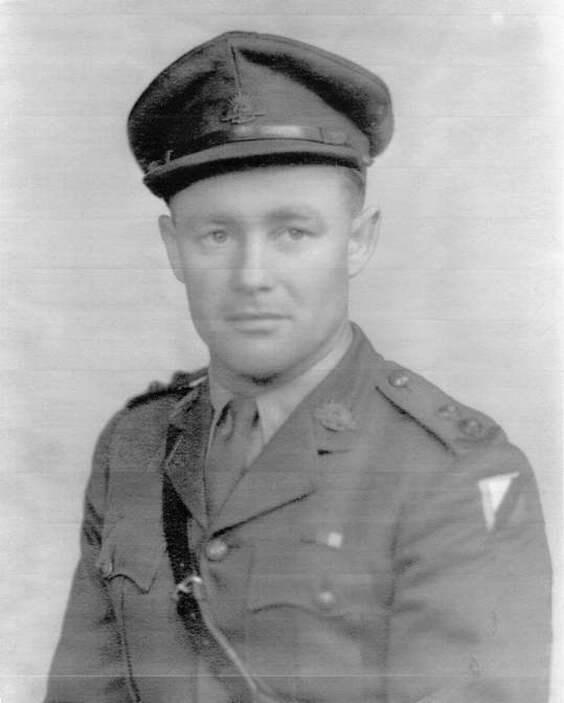 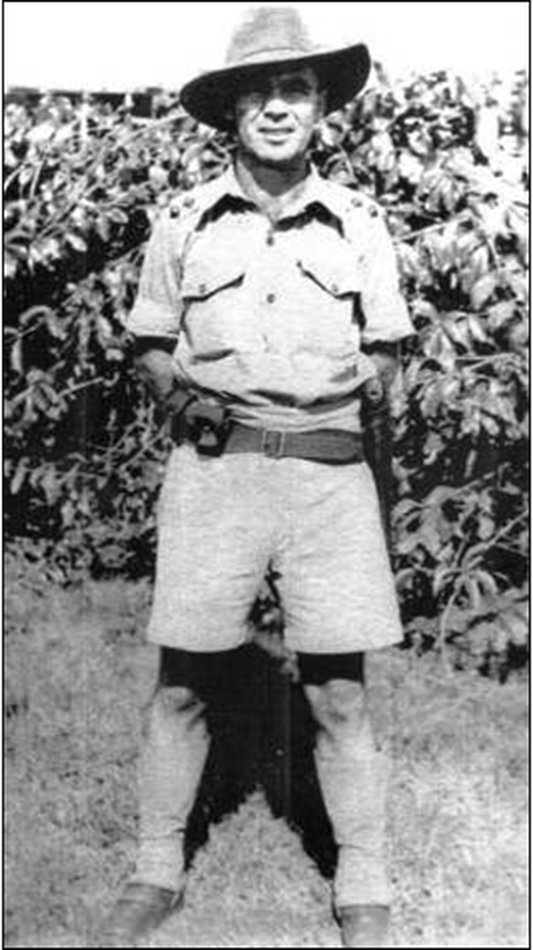 ​NG 821, NG 2242, NGX 391.  Lt later Capt Philip Ambrose Tuckey.
Philip evacuated from New Guinea via the Bulldog Track and transferred to the 39th Battalion.  He survived the battles on the Kokoda Track but was shot through the right thigh and left knee in the assault on Gona on 8 Dec 1942.

He was evacuated to Australia and returned to New Guinea as a Company Commander with the 1st New Guinea Infantry Battalion. On the morning of 11th Dec 1944 he was leading a patrol of NGIB at Watam West when he was fatally wounded.

​He now rests in the Lae War Cemetery. 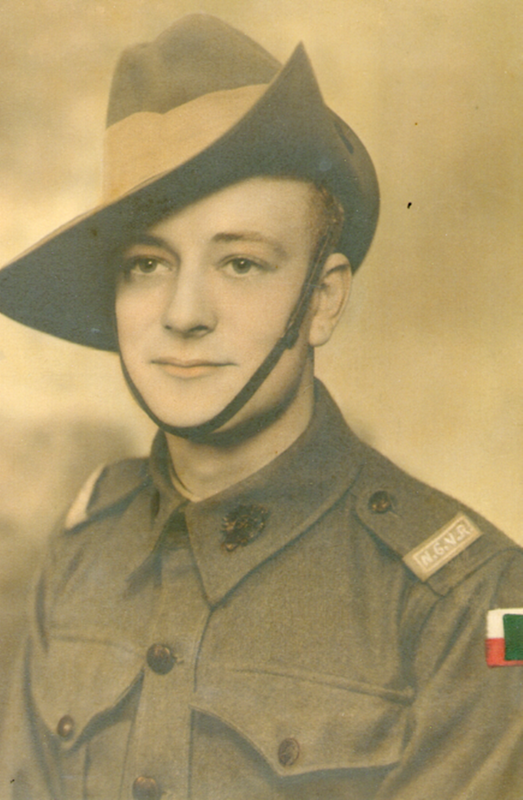 When fit again he was posted to 3 Australian Watercraft Workshops at Kangaroo Point, Brisbane, where he served out the War. He was discharged in Feb 1946 and his Discharge Certificate stated that he served until 1946 in the New Guinea Volunteer Rifles, even though the NGVR was officially disbanded in 1943. 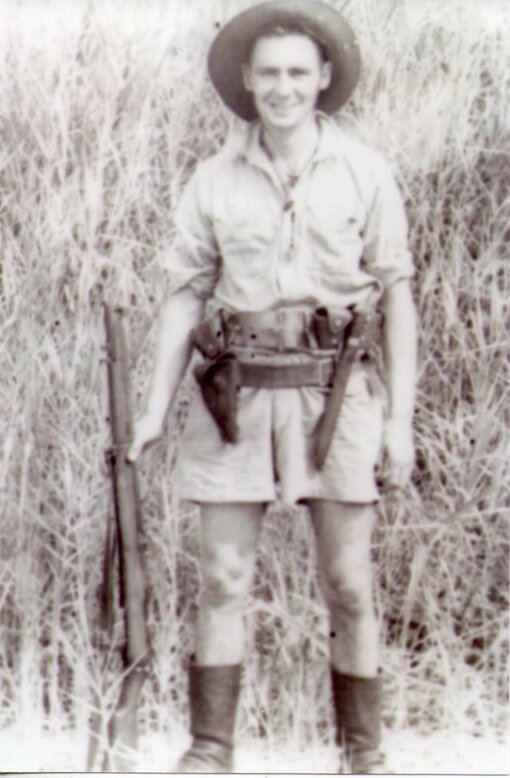