The Madang Platoon of PNGVR commenced in April 1954 when a platoon designated 2 Pl  A Coy under Lt Peter Harbeck was formed.

In 1963 the Madang Platoon again became a part of A Coy being designated 3 Pl A Coy with S/Sgt Stan Gould as Pl Comd. 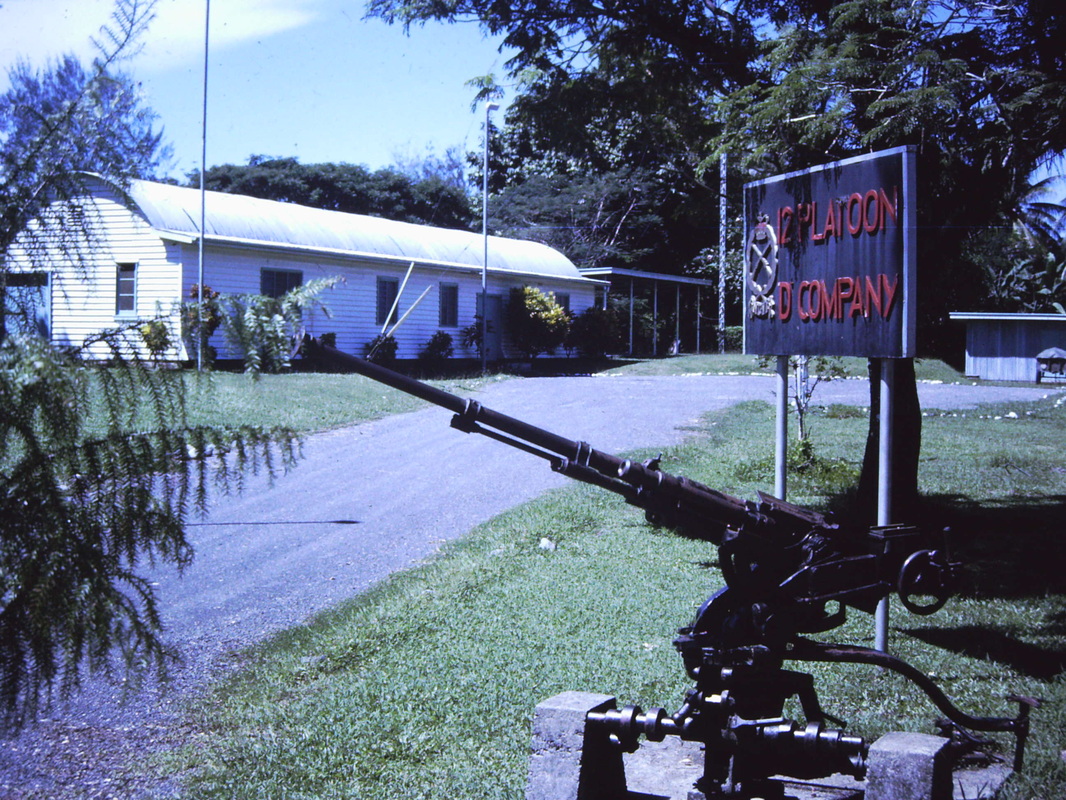 12 Platoon D Company Madang Depot. The Q Store was at this end, then the Admin Office, a small lecture space and at the far end, the canteen. A covered training area was at the far end. The shed on the extreme right held stores. 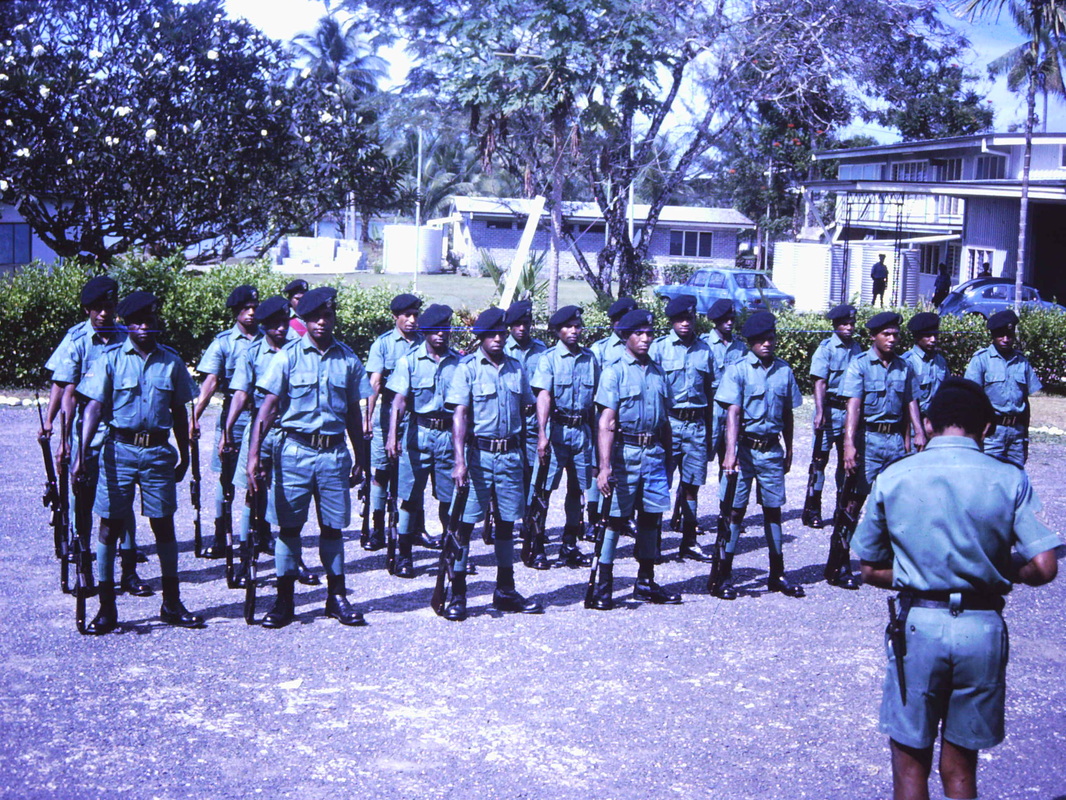 On parade for ANZAC Day 1971.  Note the Police station in the background.  SGT Arua Paru calling the roll. It always amazed me how these soldiers could parade in perfectly starched and pressed Junipers. 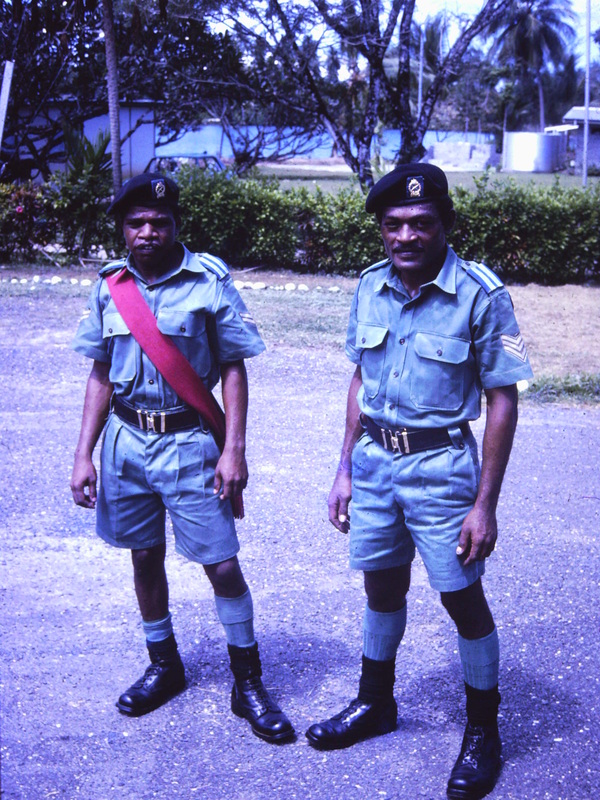 CPL Duncan Wamatabe (L) and SGT Arua Paru.  Stalwarts of 12 PL. Not sure why the CPL was wearing the red sash and not the SGT? Maybe it was his turn! 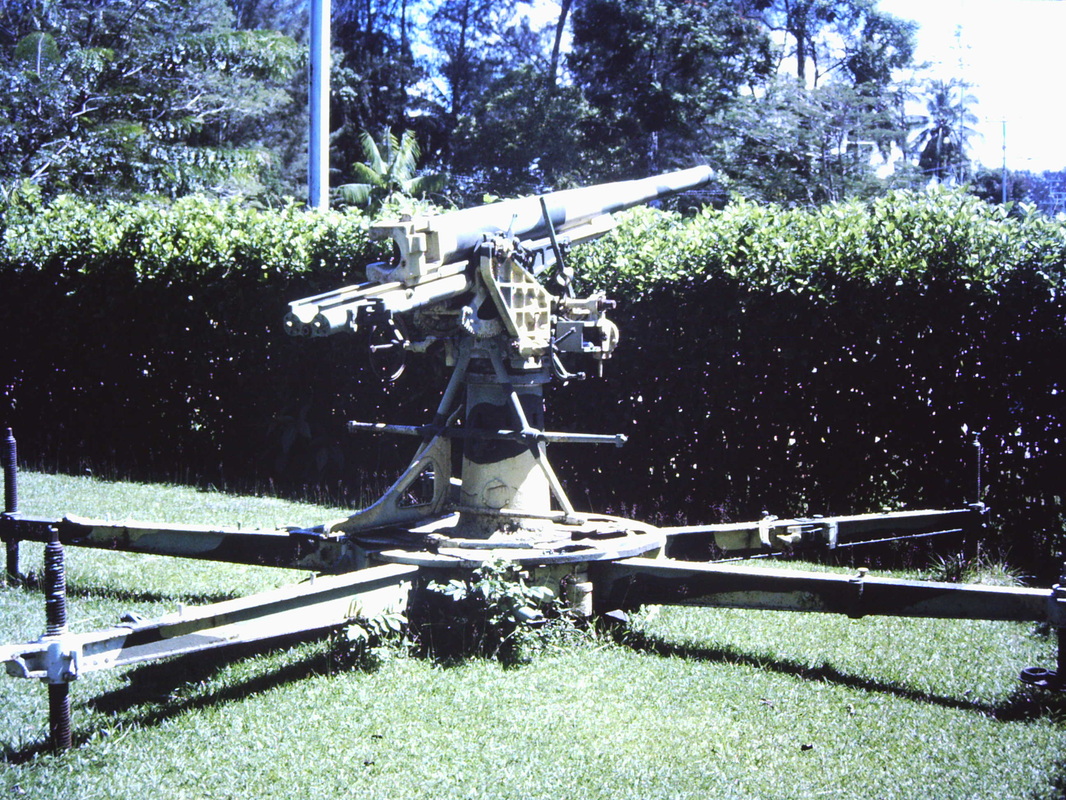 This Japanese anti-aircraft gun was pulled out of the bush near Alexishafen... not a bad effort considering we had no cranes or proper lifting gear. I think that it was about 3 inch calibre.  It was placed in the front of the depot. It was removed after PNGVR was disbanded and is now on display in the Canberra war memorial. 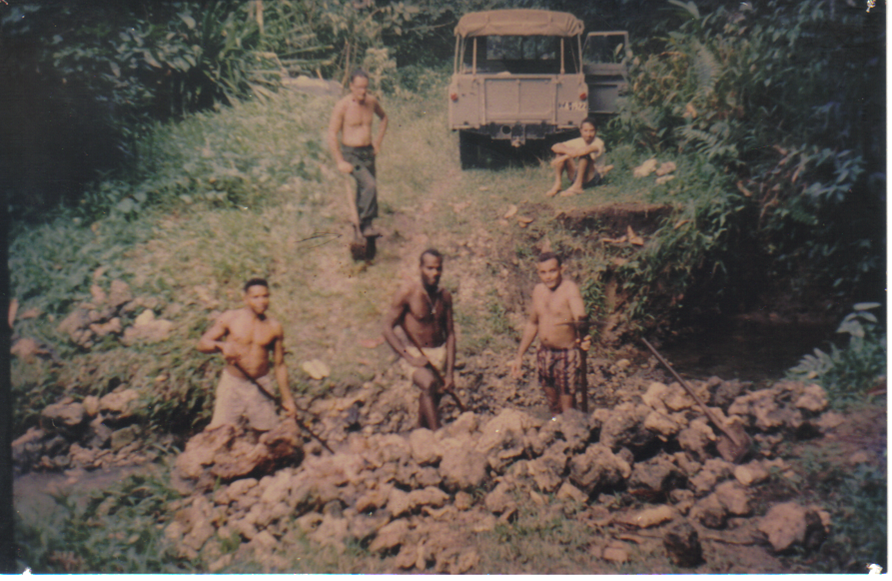 All materials were donated and Madang Pl members voluntarily carried out the work.

S/Sgt Stan Gould was the moving inspiration behind the project, and was told by Col. Mal Bishop that this was the only PNGVR project that didn’t cost the PNGVR any money
​
Photo below.   The completed camp. 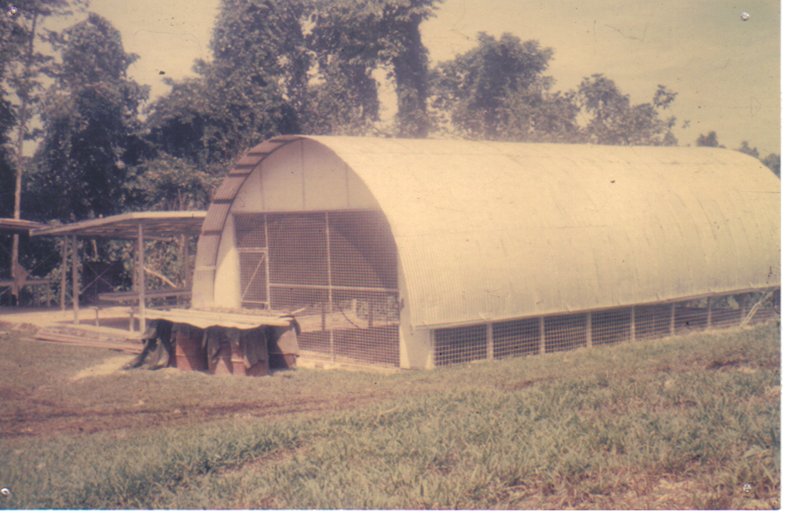 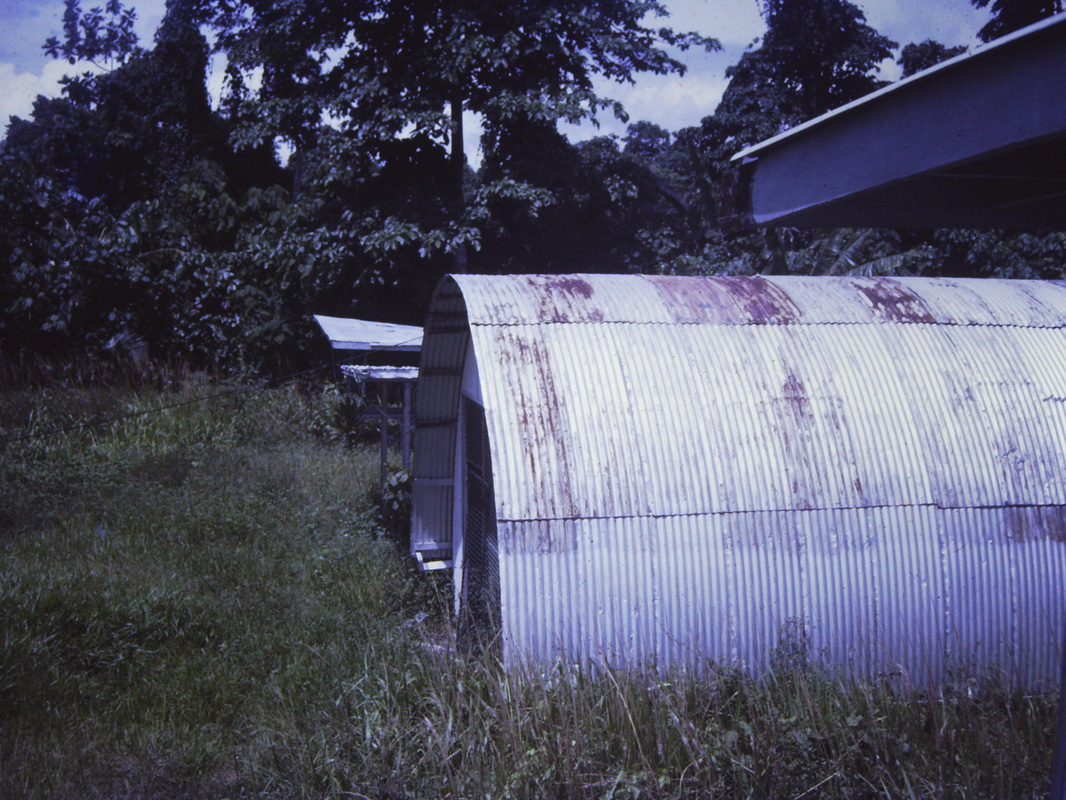 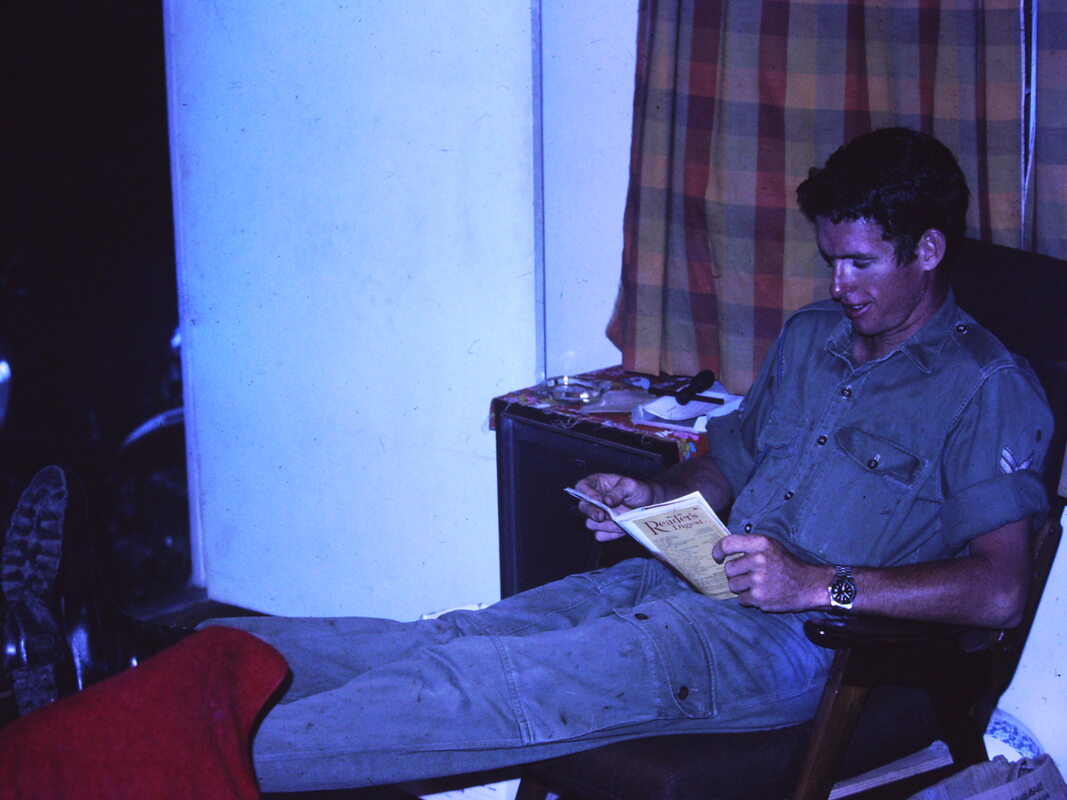 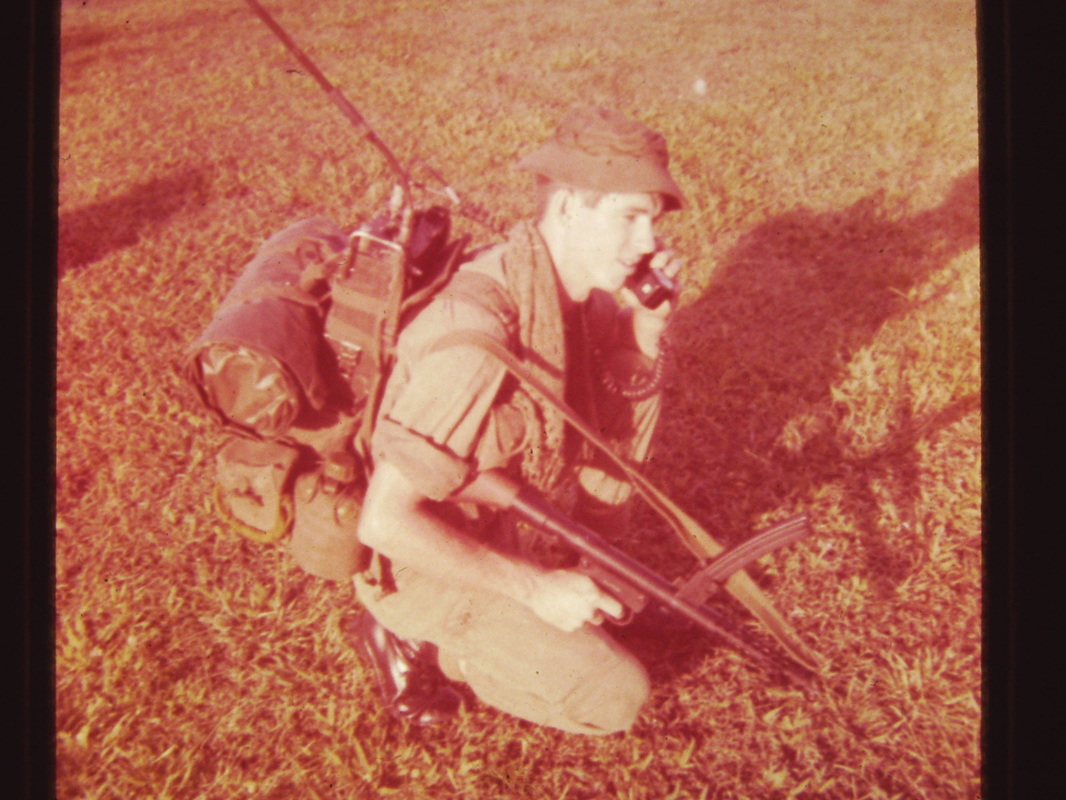 What the well dressed SIG wore.  SGT Trevor Connell ready for camp - 1972  Note the SMG F1.  Today, it would be a breach of safety in that the finger was inside the trigger guard and not outside. 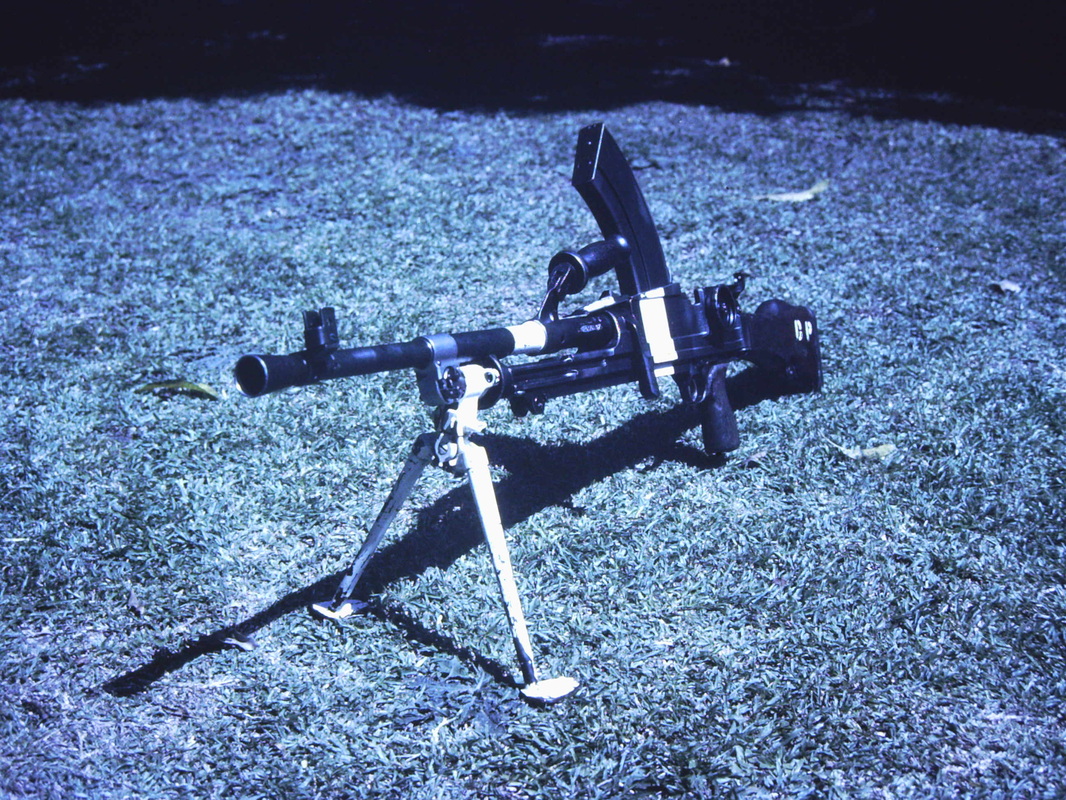 Can't recall why we had a DP Bren gun.  (webmaster) 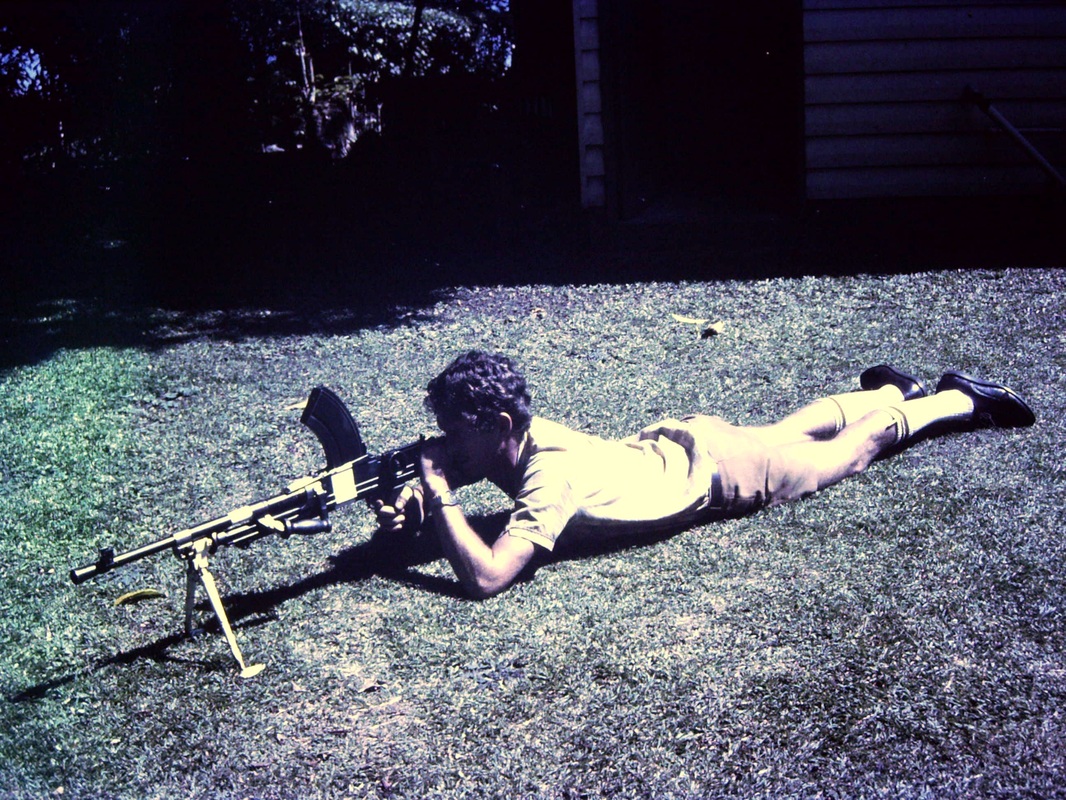 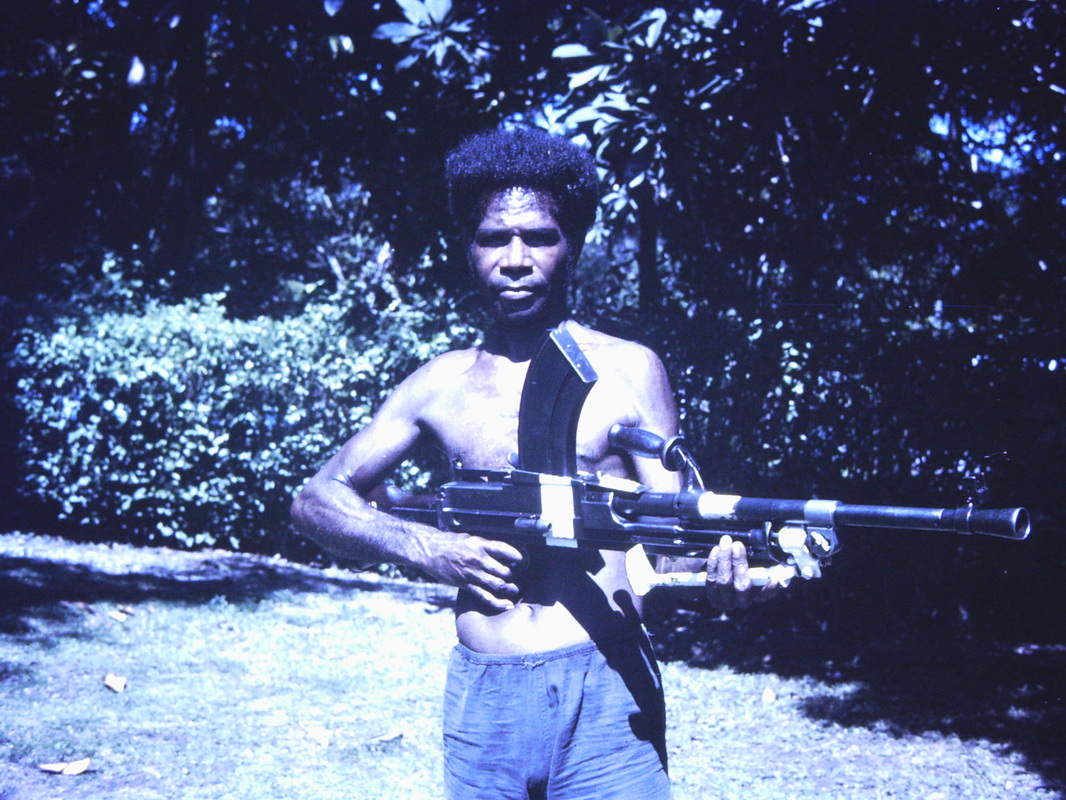 Even the gardener wanted his photo taken ! 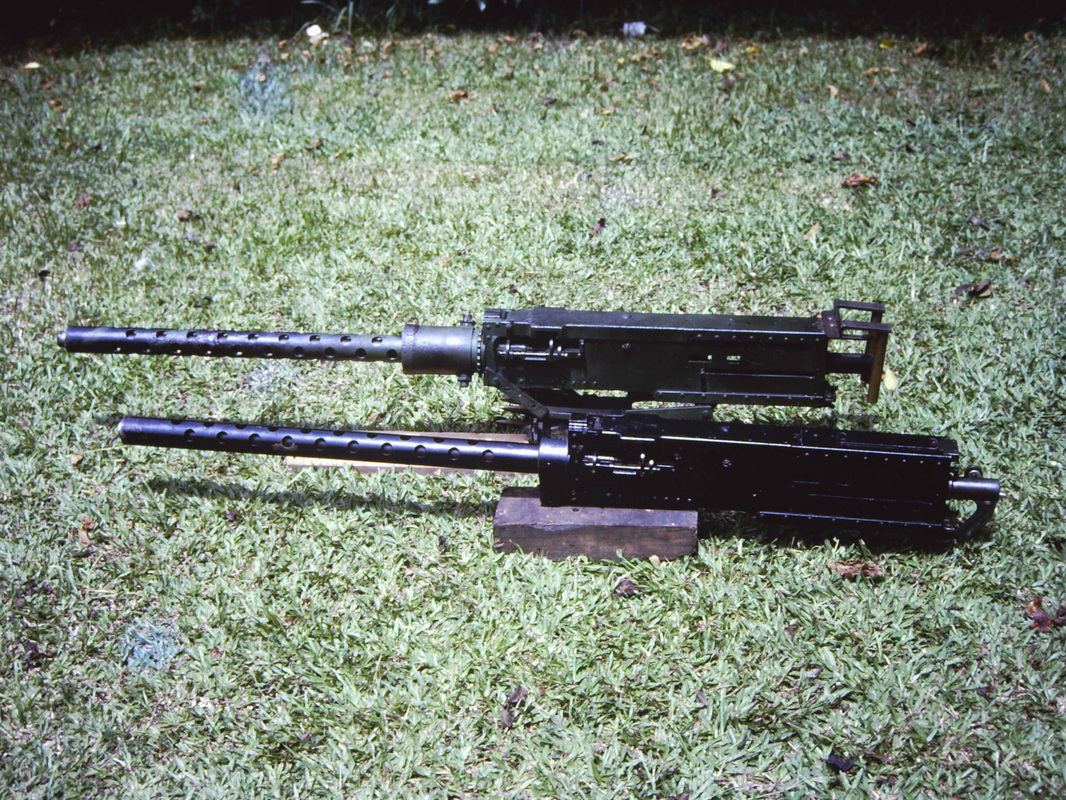 The two .50 cal HMGs that lived in the armoury. It didn't appear strange or unusual to have these together with an OMC Owen Gun and Japanese Arisaki rifle in the armoury...!  Regimental property? On a visit by the CO, he instructed us to "get rid of them".  They were taken next door to the police station where we got a receipt for them. I wonder what they did with them... 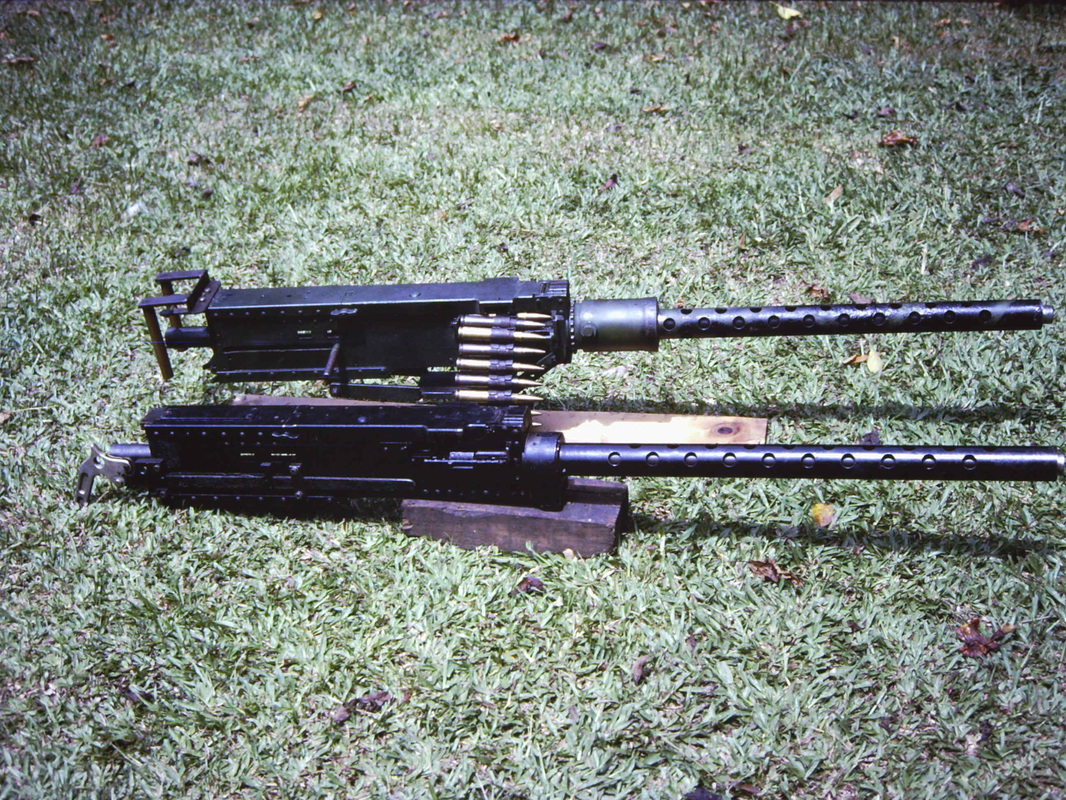 These guns were salvaged from a crashed aircraft (by Stan Gould?)  They differ from a vehicle mounted gun in that they have the air cooling over the barrel and no trigger (the far one had been modified by someone in 12 Platoon! It actually worked!). They were fired electrically with a solenoid.  Legend has it that when they were tested in someone's garage, they shot the back wall out...!  Quite possible.... 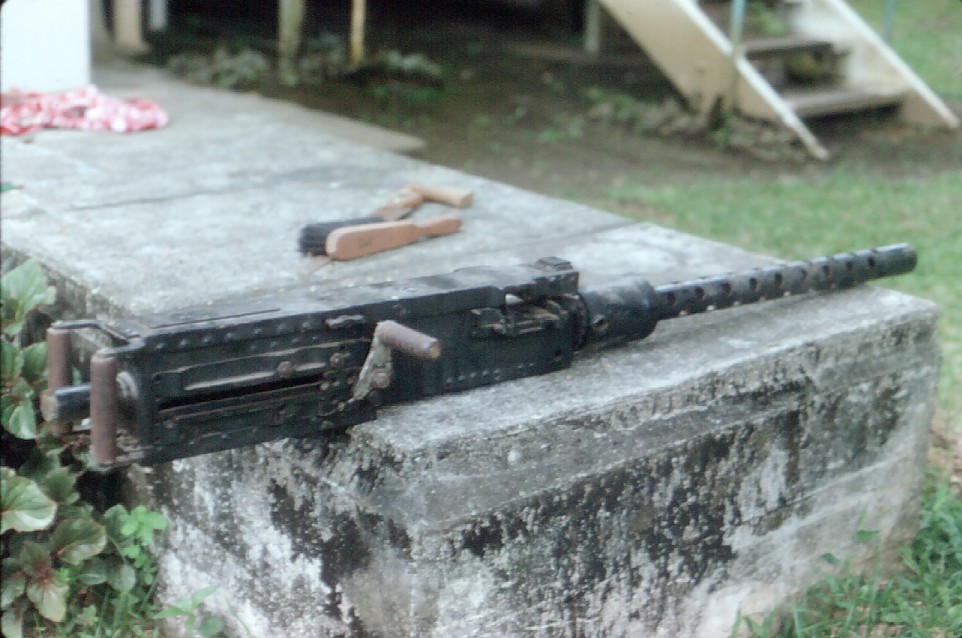 Refurbishment of one of the .50 cals.  Handles were made and the cocking handle fitted. This was necessary as they were out of an aircraft. 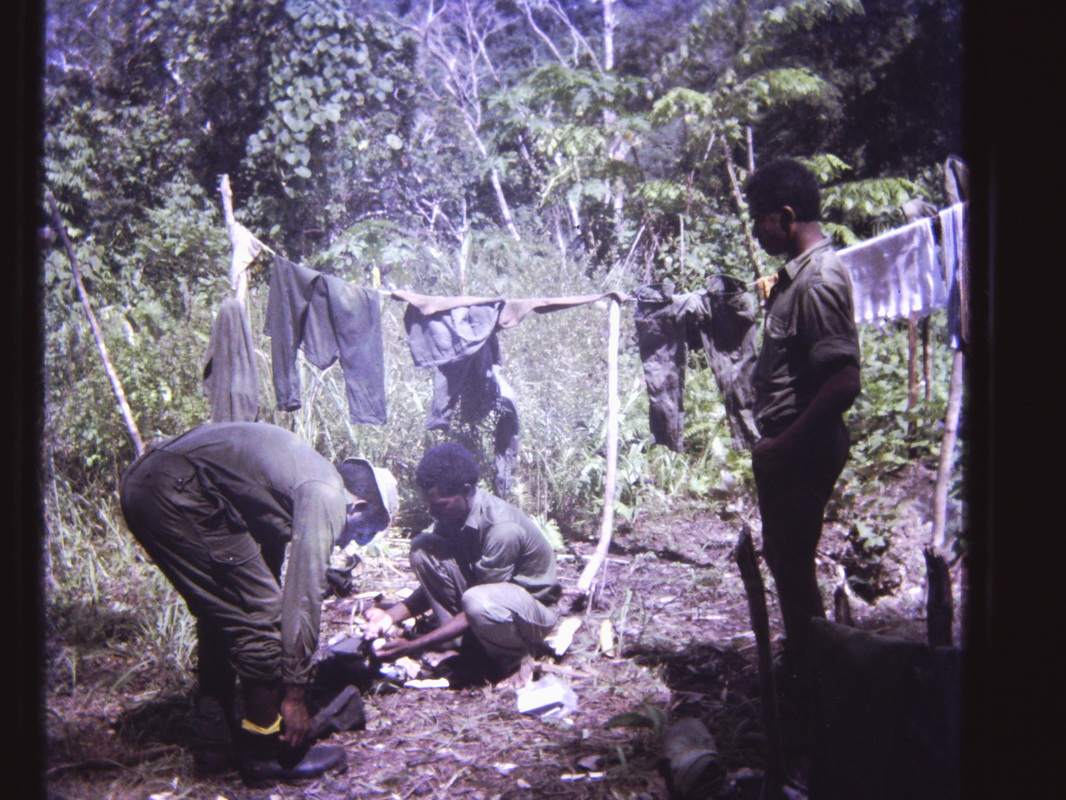 A bivouac near Madang circa 1972.  An apparently relaxed event... 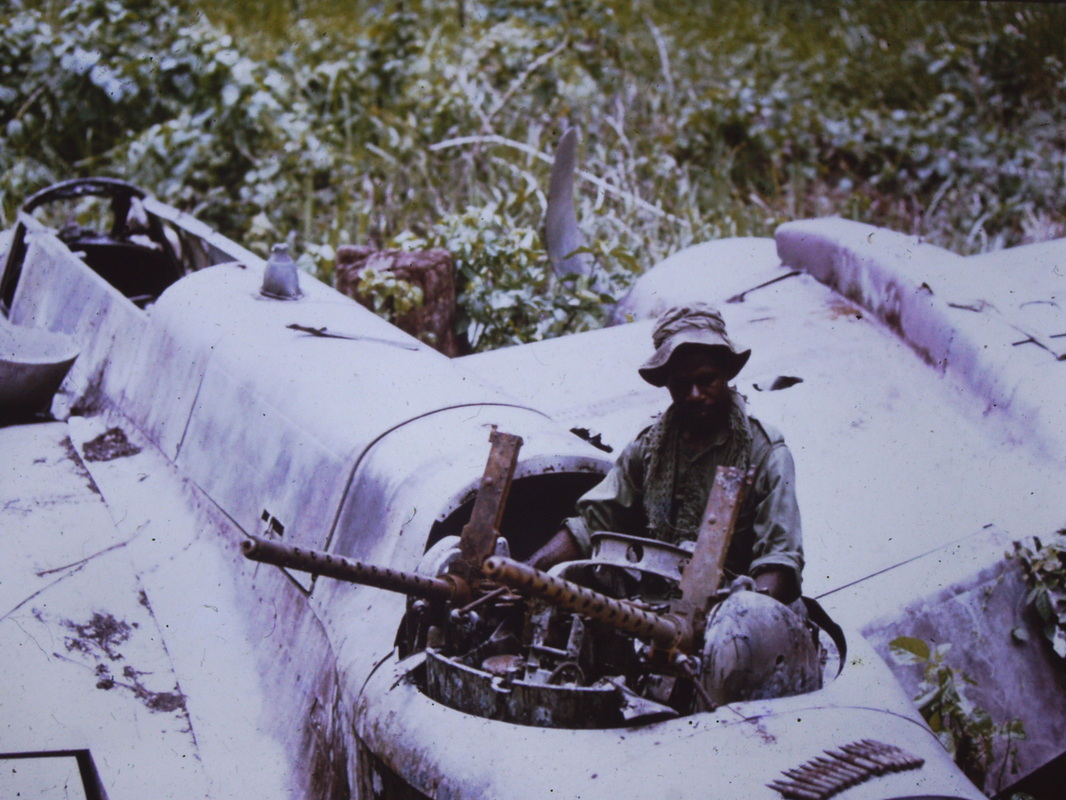 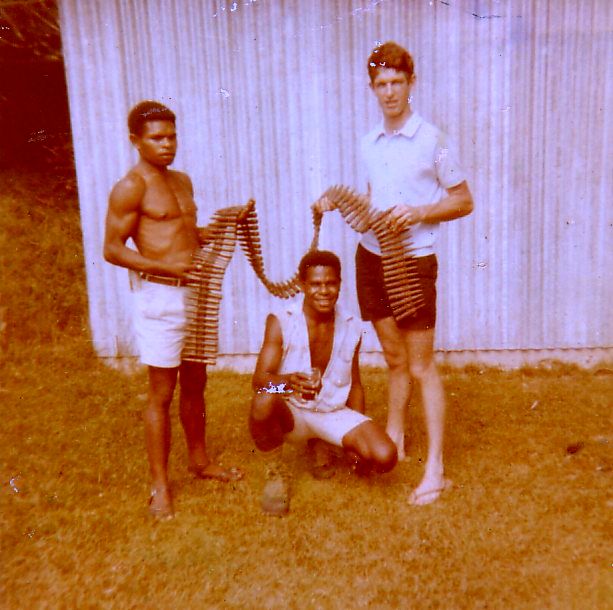 The ammo for the .50 cals was kept in the garden shed at the back of the depot!  It was eventually taken and dumped in a creek on the way to Rempi on the orders of the CO.(L-R)  PTE ? (a SEPIK I think), PTE  Rafael Kasar, SGT Trevor Connell
​ 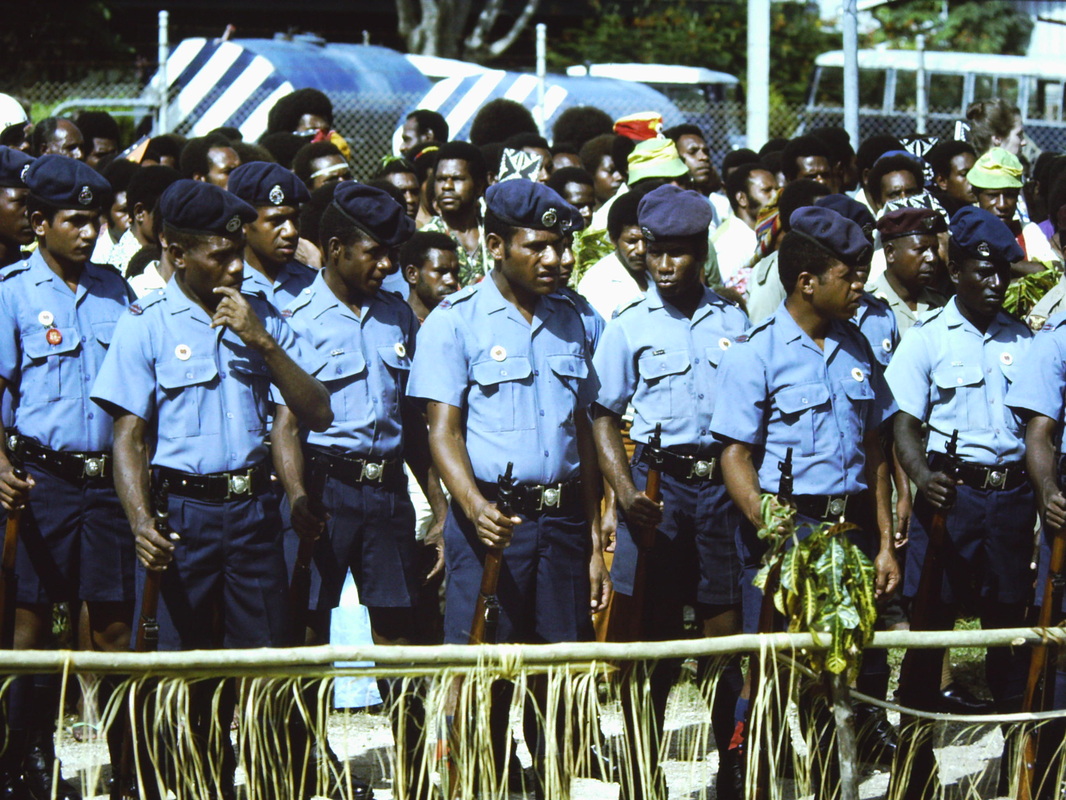 Ok... it's not PNGVR but this was the Police contingent at Independence Day.  Note the Independence badge and the No 4 SMLE .303's.  We used SLR's, they only had .303's .... but it sounded impressive to the locals when they worked the bolt to cock the rifle! ... much better than an SLR.  The legend was that SUPT Mike Thomas, when he was in charge of Pt Moresby and there was trouble at the lower pub, he would take his police squad in, order them to load and ..... there would be instant silence and order!!! 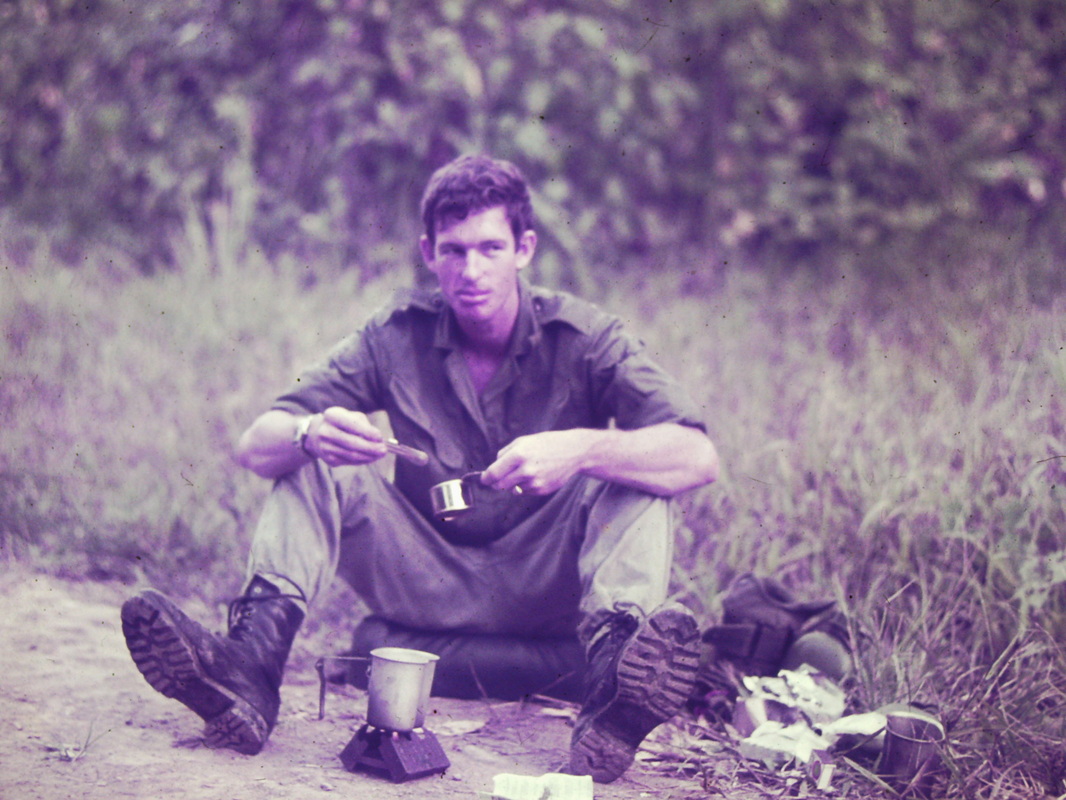 SGT Trevor Connell having breakfast on a bivouac (note the small tin of ham and eggs!)  I am sitting on the cushion out of the Land Rover.  Ignore the grumpy look! ... it is probably because someone just said "Packs on, Move out!"  Also note the 2 cups, canteen, steel.  A very switched on digger!  I had my own GP boots as the system didn't provide them then. I loved them. 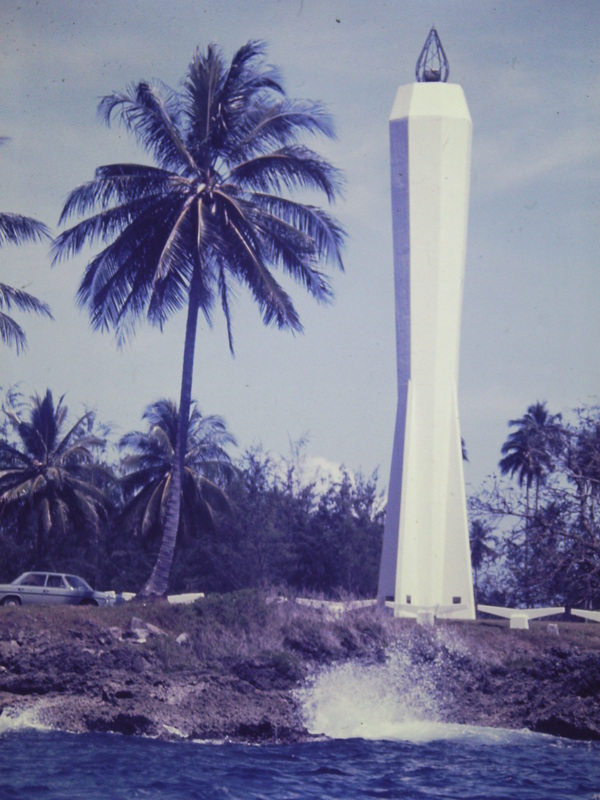 Anyone who has been to Madang will recognise the Coastwatcher's Memorial at the entrance to the harbour. 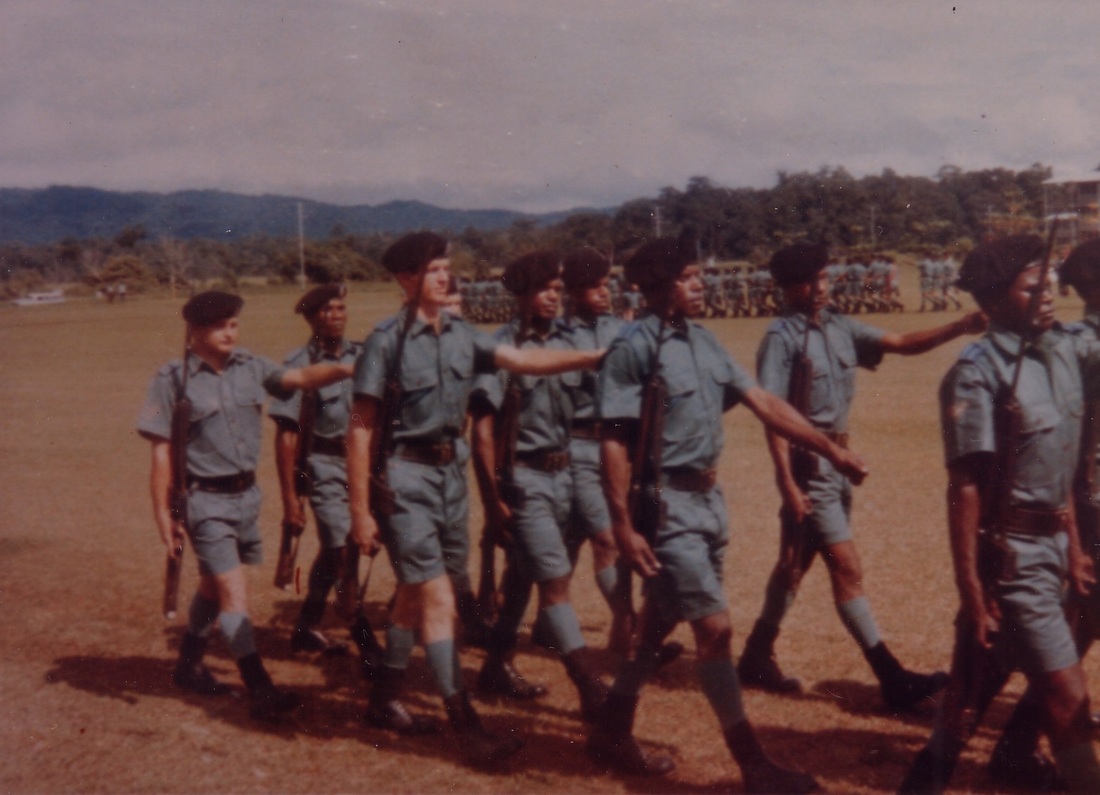 12 Platoon, D Company on a parade at Igam Barracks.  SGT Trevor Webb (L) with SGT Trevor Connell in front of him. 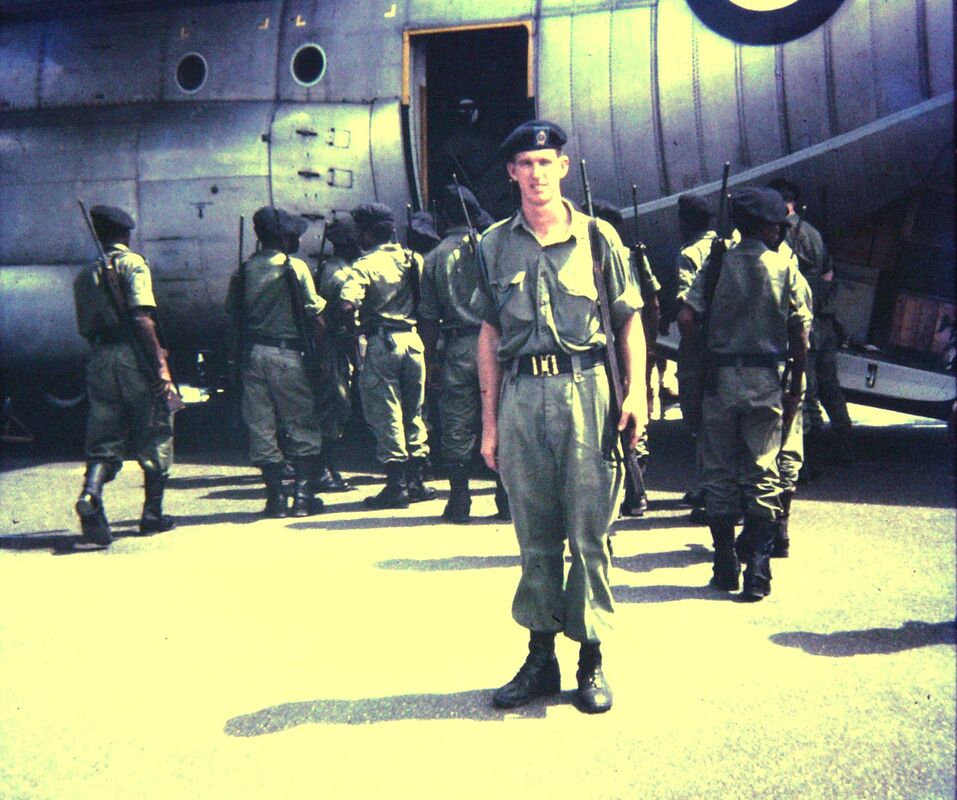 SGT Trevor Connell with 12 Platoon boarding a C130 in Madang to go to Lae for the annual camp. We drove the land rover out to load onto the aircraft without DCA approval to go onto the tarmac. They were quite upset....  we apologised of course !!! 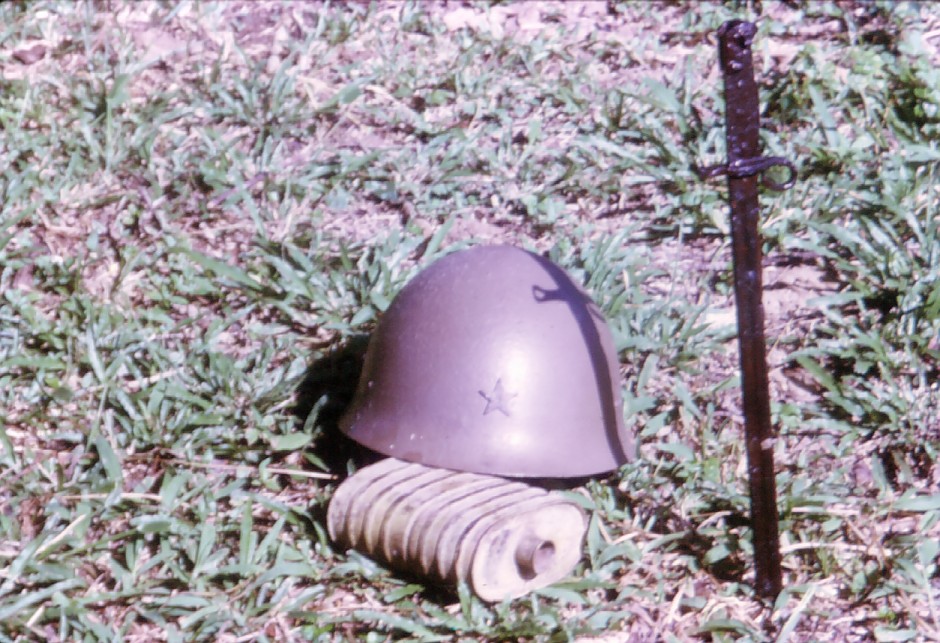 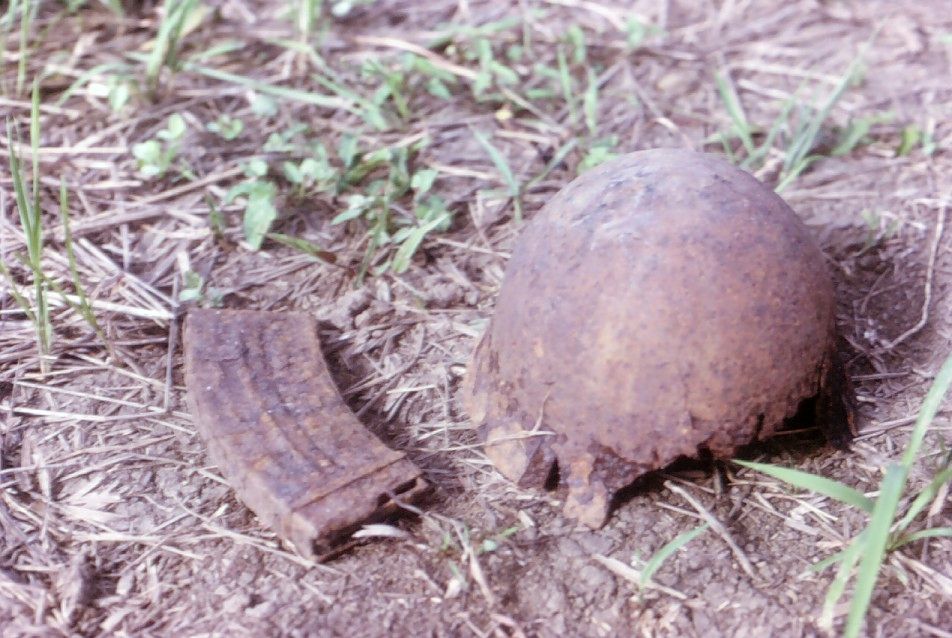 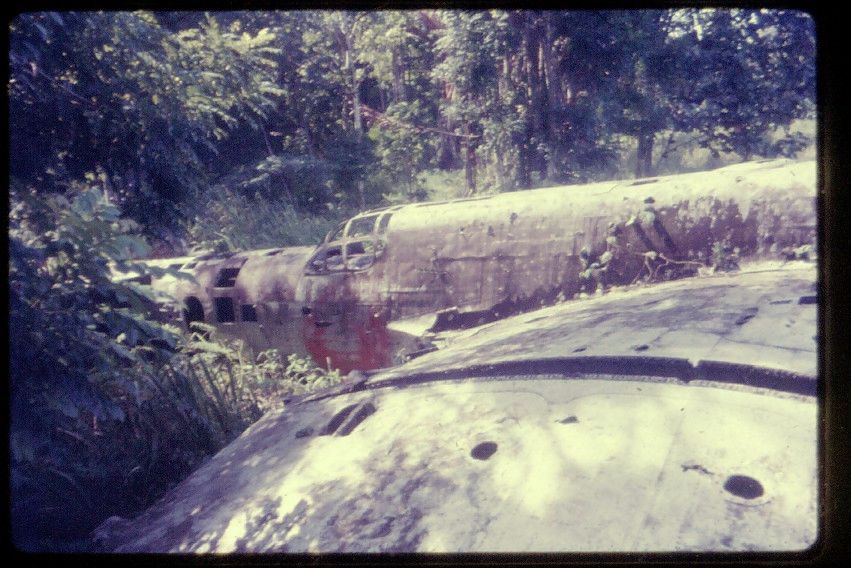 A Japanese 'Betty' bomber at the Alexishafen (Sek) airfield.  Note the red markings still visible on the fuselage. 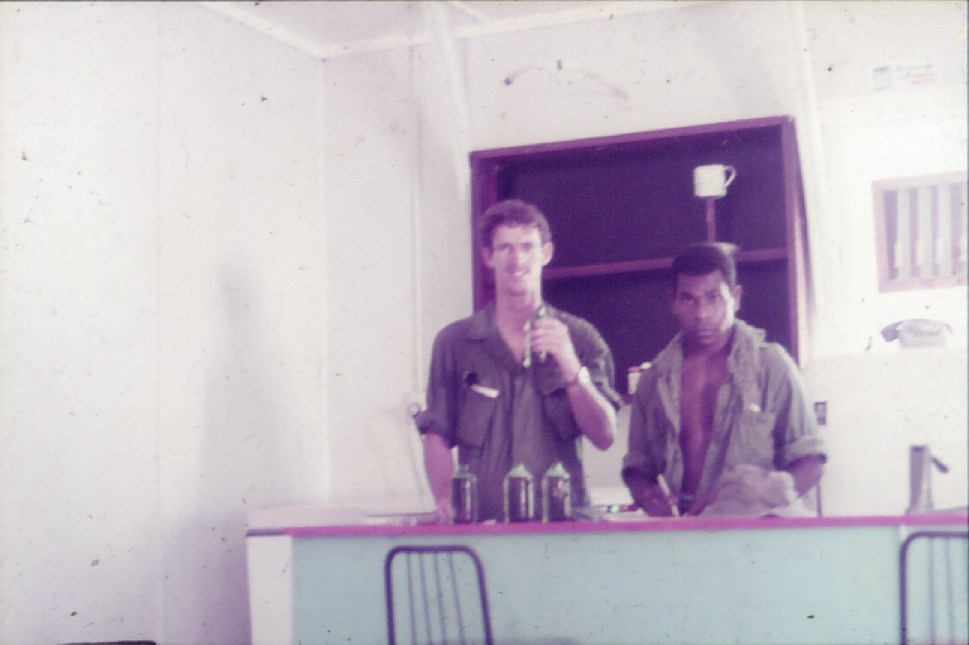 SGT Trevor Connell and PTE Rafael Kasar in the Canteen.  Note the Nobanob Cup in the shelf.  The Nobanob cup has a story....

The Madang Nobonob Cup – A Background.
By Bernie Arnold

I was first posted to Madang late in 1960 as a District Accounts Clerk.  On arrival I noticed that the few roads around Madang were generally on the level coastal strip, so I bought myself a bicycle to give me some mobility.  This bicycle got me some 50K up the North Coast Road and some 25K south into the hills to Amele Village. There were no frills such as lights, but I did add a battery-operated horn to clear my path as the brake was not very effective on steep descents.
Sometimes I created moments of panic in unsuspecting pedestrians, who chatted loudly and thinking themselves remote from any motor vehicle, were suddenly about to be run down from behind.

I had joined PNGVR in Port Moresby earlier that year and Madang had a small but very active contingent, both in military training and social activities, such as picnics, golf days etc.

After the business part of the Platoon’s weekly training parade, members would adjourn to the adjacent small Mess for social drinks, card games and general conversation.  One evening Percy Neville and I got talking about bicycles. Several others joined in and called “Challenge!” and a race was on.

Most of the 19K to Nobonob hill was level but the last 2K went up a very steep track to the Mission. The weather on the Sunday of the ‘challenge race’ was the usual sunny, super steamy 30 degrees C.  ‘Chica’ Hutson, our OC, flagged us off.  Once on the Nobonob track I walked the bike to the summit where a control point was located and walked the bike most of the way down again and met Percy walking his ‘wiliwil’ up.

Percy claimed he had been unable to get fit for this run and demanded a rematch.  This occurred about 2 months later and this time I made the round trip in two hours but Percy had collapsed on top of Nobonob but recovered.

From time to time the cup would be taken down from its place of honour above the bar and a toast would be drunk by all.
​
The Cup was an old enamel mug, mounted on a piece of wood on a surplus aluminium saucepan lid as a base.   As it leaked it was never able to hold champagne but turned upside down the base saucepan lid could hold biscuits which could be handed around and a ‘toast’ eaten instead.
​
Footnote by Colin Gould.
Later in the 60’s and 70’s the ‘Cup’ although leaking, held one full SP stubbie, and was used to celebrate promotions, marriages etc…  the celebrant having to skoll the entire contents.

Footnote By Trevor Connell
We never used it -  it looked too disgusting !!! 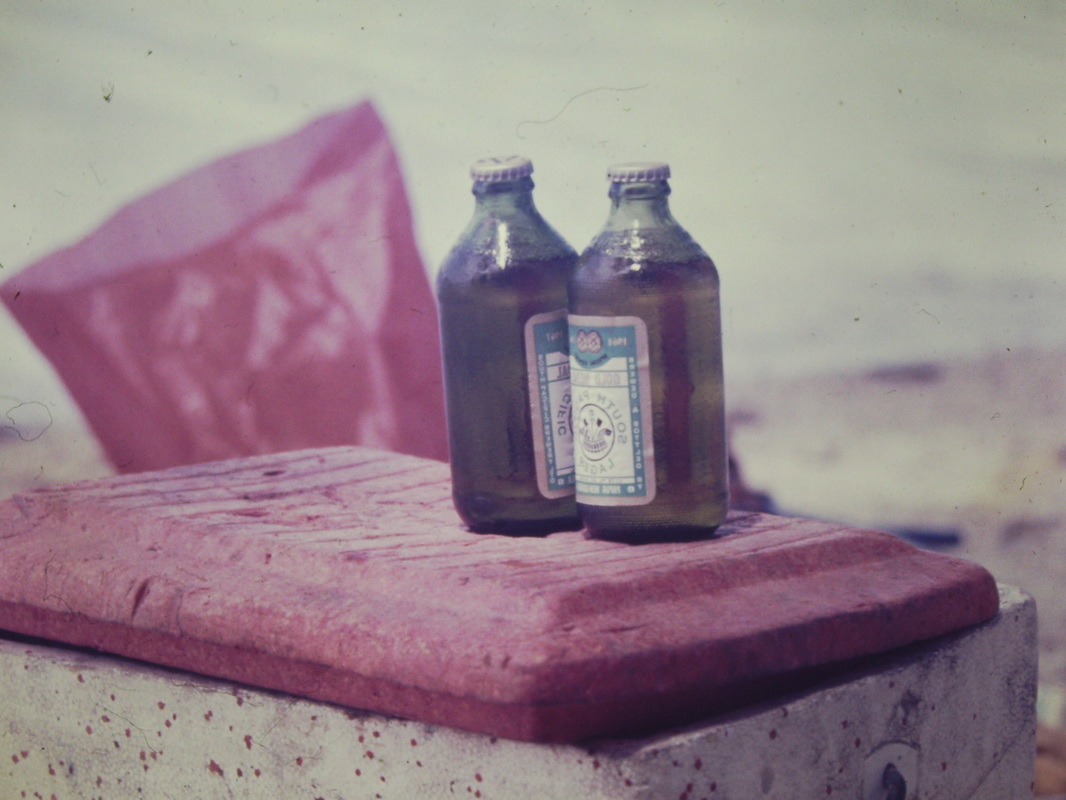 Who can forget the SP greenie! 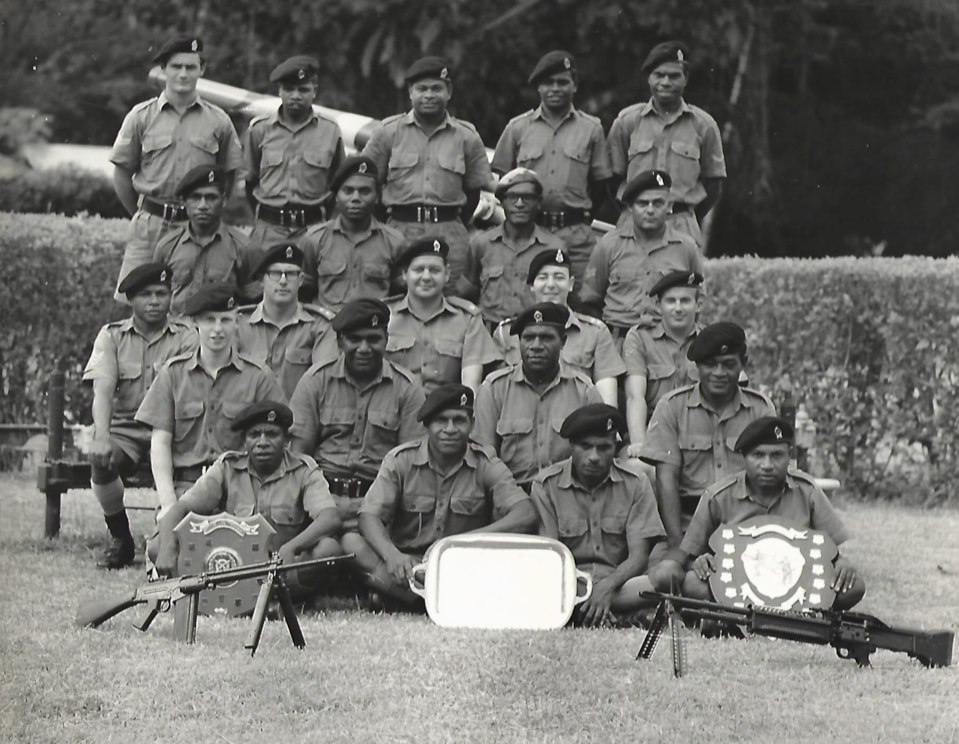 Photo Daryll Smith.
David Murray worked at the Commonwealth Bank in Madang as a teller and subsequently went on to become CEO of the Commonwealth Bank, Chair of the Federal Governments Future Fund, and was recently appointed Chairman of AMP following the Financial Services Royal Commission.

WO2 Brian Smith:  He was the ARA Cadre.  He used to come down to Madang from Wewak where he lived. It was supposedly to check the correct operation of this remote locality and undoubtedly he did.  Otherwise, he'd 'borrow' the unit land rover for transport and have a relaxed time. I think he stayed at Smugglers Inn. Brian and I would go to the Madang Club for a drink every day.