​ANZAC DAY MARCH—BRISBANE—2008
​
A fine and sunny Queensland day. greeted marchers and spectators at one of the biggest ANZAC Day parades Brisbane has seen.
Some 75 members made parade looking splendid in our traditional ANZAC Day dress, with flags and banner, and led by our President Phil Ainsworth. Our two young wreath bearers where the great grand children of former member. S/Sgt Stan Gould (Dec) - Joshua and Joel Gould.

We were very fortunate ( and most grateful ) to have a great band inserted into the parade directly in from of our unit. Bands are always in short supply during such large parades and we were very lucky indeed. Following the parade members attended our NGVR Memorial service in the Shrine of Memories.

With the loss of our long used post march venue, the Exchange Hotel, due to new owners and being closed for major renovations, the Manager of the Victory Hotel (across the road) kindly came to our rescue at the last moment, and provided us with a room and bar for our usual get-together. Our sincere thanks to the Victory's General Manager, Function Manager and staff who made us feel most welcome.

Simply put, there was certainly plenty of drinks and heaps of hot and cold food this year. Our raffle for scratchie tickets was won by PNGVR member, John Grasse from Ballina. John advised that he scratched $67-00. Second prize of scratchies was won by Mal Zimmermann. Money raised from the raffle will be directed towards our Museum. Thank you to all members who purchased tickets.

The highlight of the day was a fantastic musical rendition of that World War 2 favorite, “Lilli Marlene “ in both English and German, by none other than our very own Karl Aschhoff. Well done Karl, Australia certainly does have talent.
​
Thanks to all those members and their guests who made the day a great success for our Association. To those behind the scenes with the day's preparations. I thank Paul Brown. John Holland and Doug Ng for their assistance.
​
Col Gould

By Member Lt. Bill Bickerton (Rtd)
On the 24 April my wife Sawai and I booked into the River Kwai Village Hotel which is just 10km from the Hellfire pass Museum in Thailand. The resort is right on the bank of the River Kwai. The Resort was well and truly booked out with Australian families and ex and returned servicemen and women. That evening we had dinner at the resort and met with many Australians. This was an Interesting and humbling experience because most of them had no connection with the war or POWs that were forced by the Japanese to labour on the infamous railway. They were simply patriotic, decent Australians who recognized the importance of keeping the ANZAC legend alive.

I had the privilege to buy a drink for an old Digger who was one in a group of five attending the service, who had served on the Siam/Burma Railway What a remarkable man. For the past 11 years he has organized and sponsored fund raising in his Australian country town to take a group of local teenagers to Hellfire Pass each ANZAC Day for the memorial service. Over that period he has escorted 163 young Australians to Thailand for ANZAC Day.

We visited the Railway museum which is located on top of the ridge through which Hellfire Pass was cut. The museum ​was funded and built as a joint project between the Australian. New Zealand and Thai Governments and is a magnificent building with many mock ups of the actual conditions our men worked under, with an original movie showing the horrific war time conditions. The place was hellish and the name 'Hellfire Pass’ comes from the fact that the POWs were forced to work up to 18 hours a day including night work by the light of open flame oil torches.

The actual Dawn Service was held in the “Hammer and Tap' cutting and the cutting and track was lit in the same way. It was rather eerie and a little disturbing to reflect on how it might have been working there at night under appalling conditions.

We set the old alarm for 0315 hours on ANZAC Day morning and drove to the museum car park. I wore our full Association ANZAC Day dress with my service awards. Small taxi trucks transported old Diggers down onto a new concrete road that has been constructed to provide a flat walk way for them to the pass. I escorted one old gentleman on the 400 m walk along the rail bed to the actual cutting. The Dawn Service started at 0530 hours.

The service was a magnificent tribute to our old soldiers and those who made the supreme sacrifice.

The following morning tea at the museum included a shot of, yes, Bundy rum—most enjoyable.

We returned to our Hotel, showered and change then drove the 75km into the War Cemetery in town, arriving for the 1100 hours memorial service. The war cemetery is magnificent and, as expected, kept in immaculate condition. It contains the remains of some 1,356 Australian soldiers plus those from Holland and many other Commonwealth countries. Prior to the actual service a young Australian boy of about 10 recited a very beautiful poem called ‘The Rose". He was well applauded. The Last Port and Reveille was played by Thai soldiers.

I estimated that over 100 wreaths were laid at the memorial that day, including mine on behalf of and in the name of the NGVR / PNGVR Ex Members Association.

Later in the day I changed from my ANZAC Day dress into shorts and T-Shirt to be more comfortable to drive the 600 km back to our home in Buri Ram.
​
What a wonderful experience and a most appropriate place to remember the men and women who served us in all the wars.​ 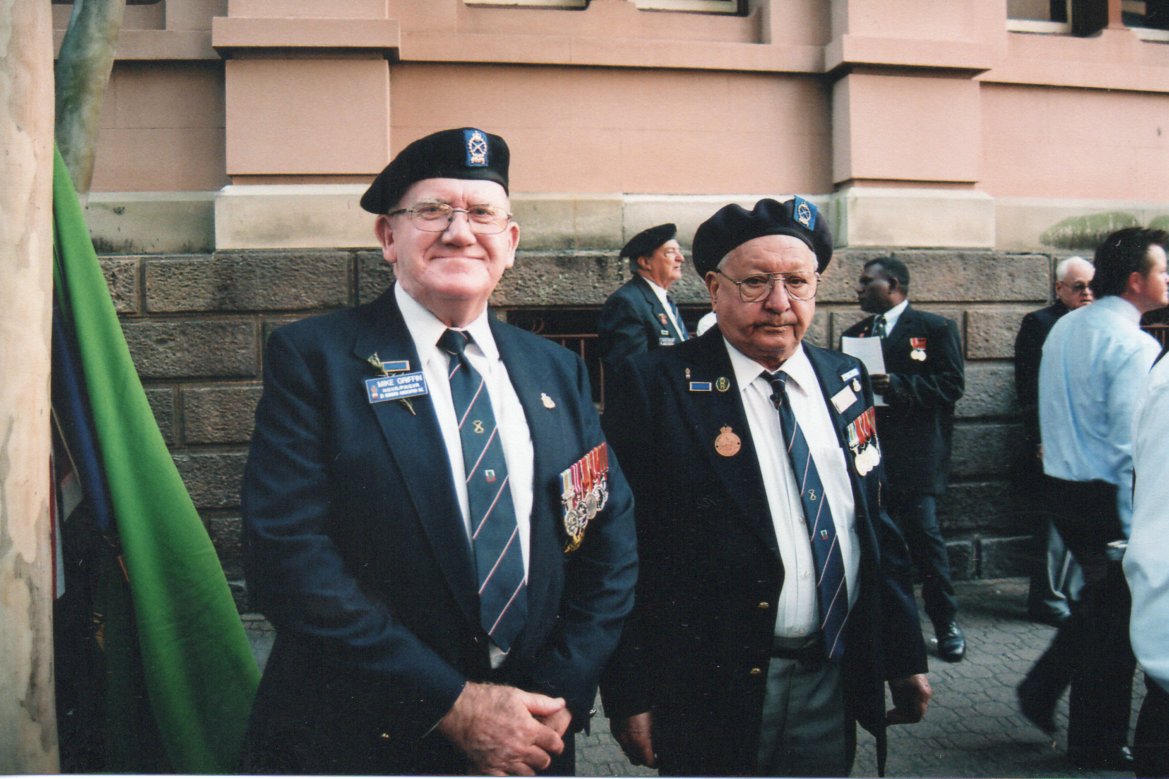 Prior to the March in Brisbane.   Mike Griffin and Ken Weare. 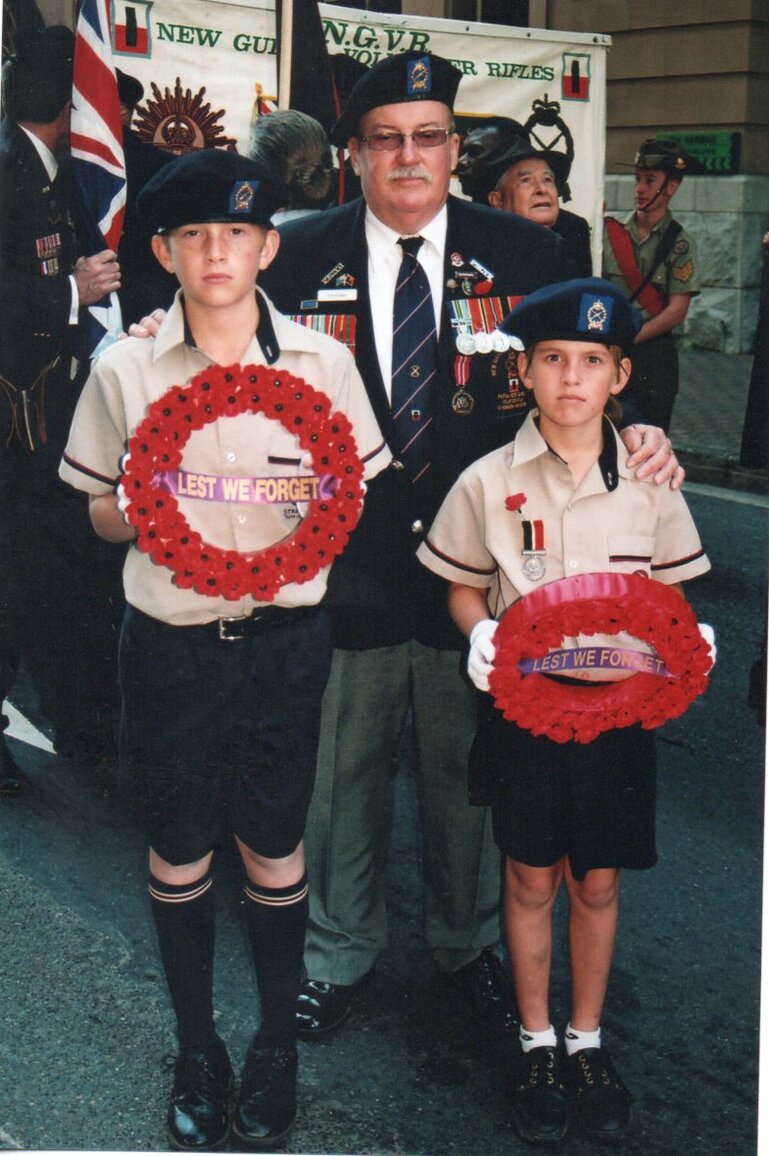 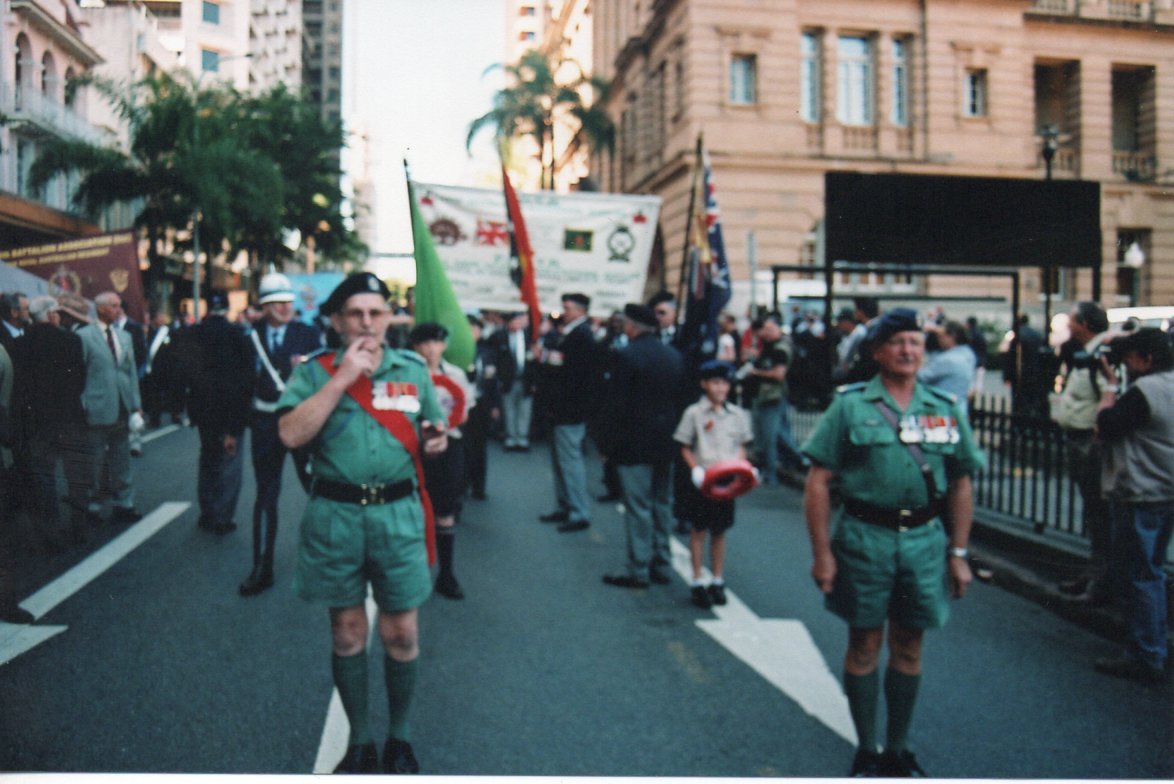 Barry Wright and Norm Mundy in Juniper Greens ready to step off. 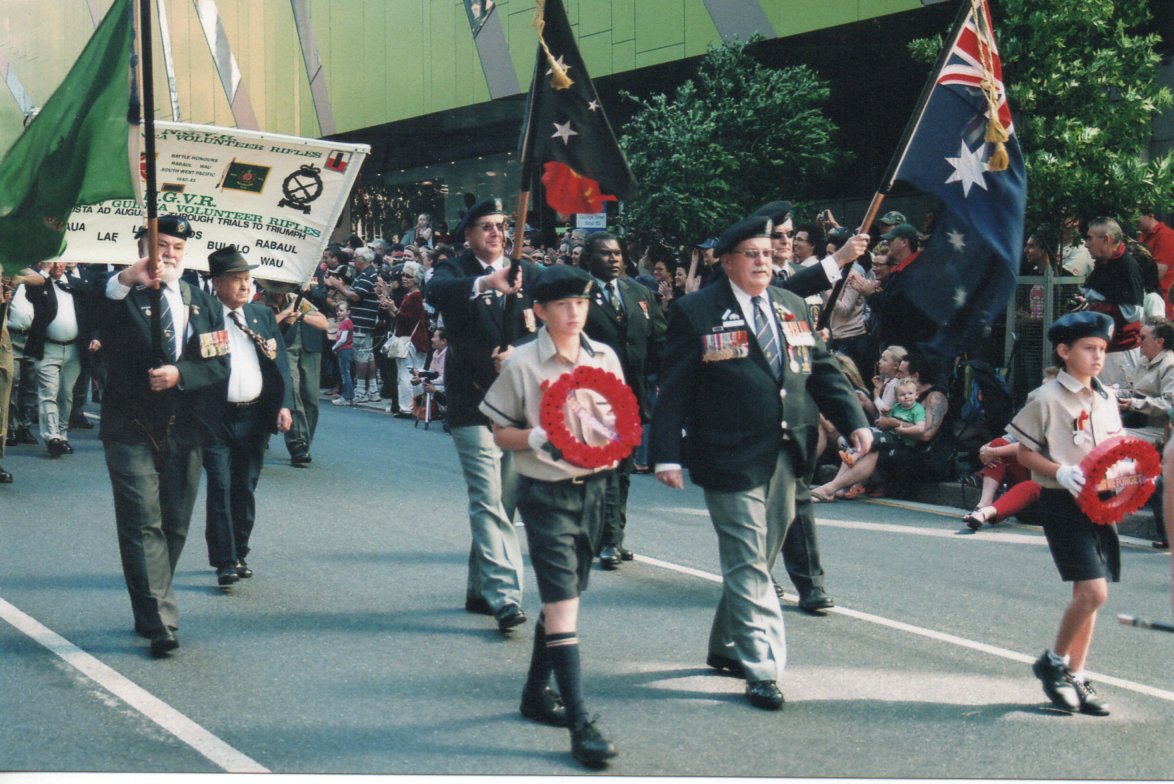 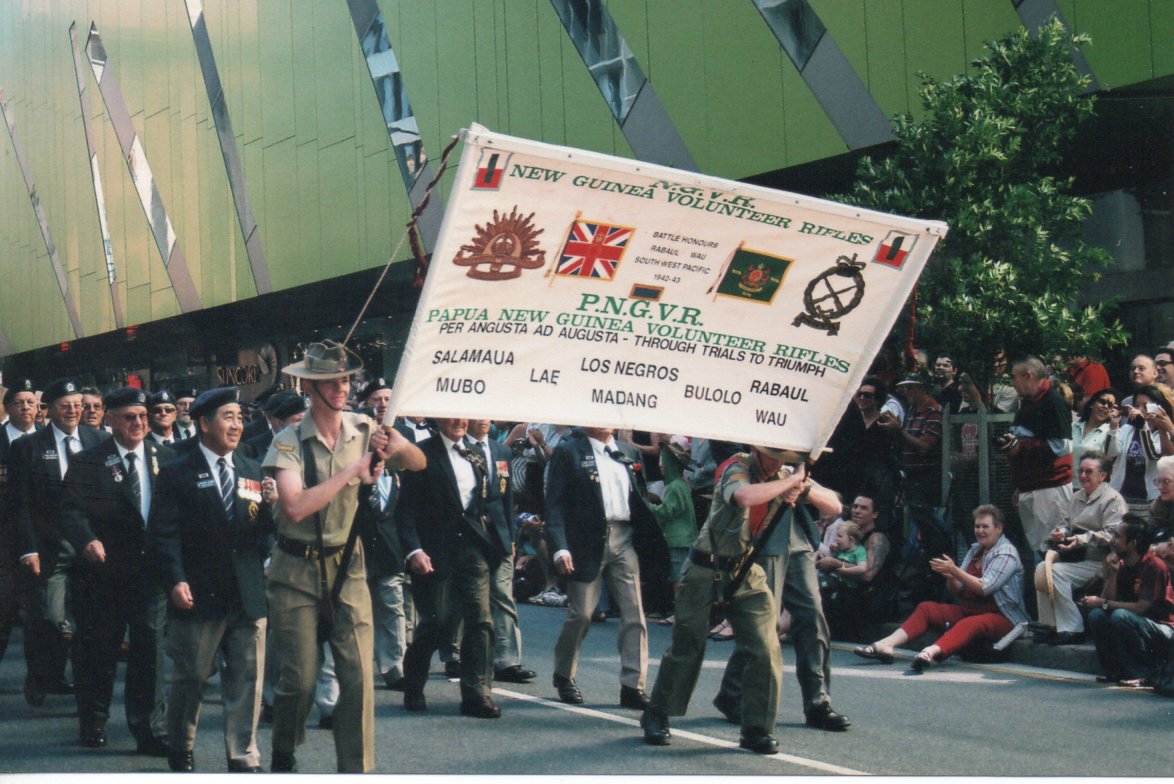 A gust of wind catches the Banner and amuses the marchers.
The reason why younger Banner carriers are sought. 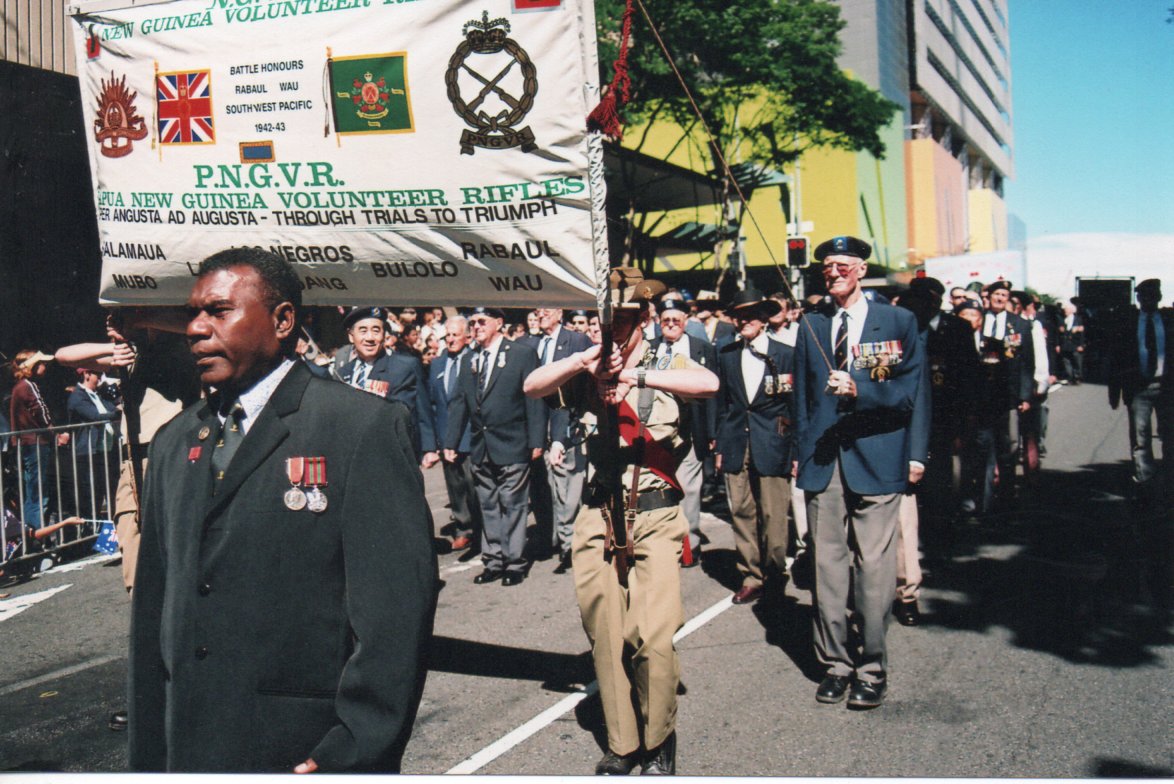 Col. Jethro Usurup who retired from the PNGDF ahead of the Banner.   Tony Milan on R. holding a banner rope. 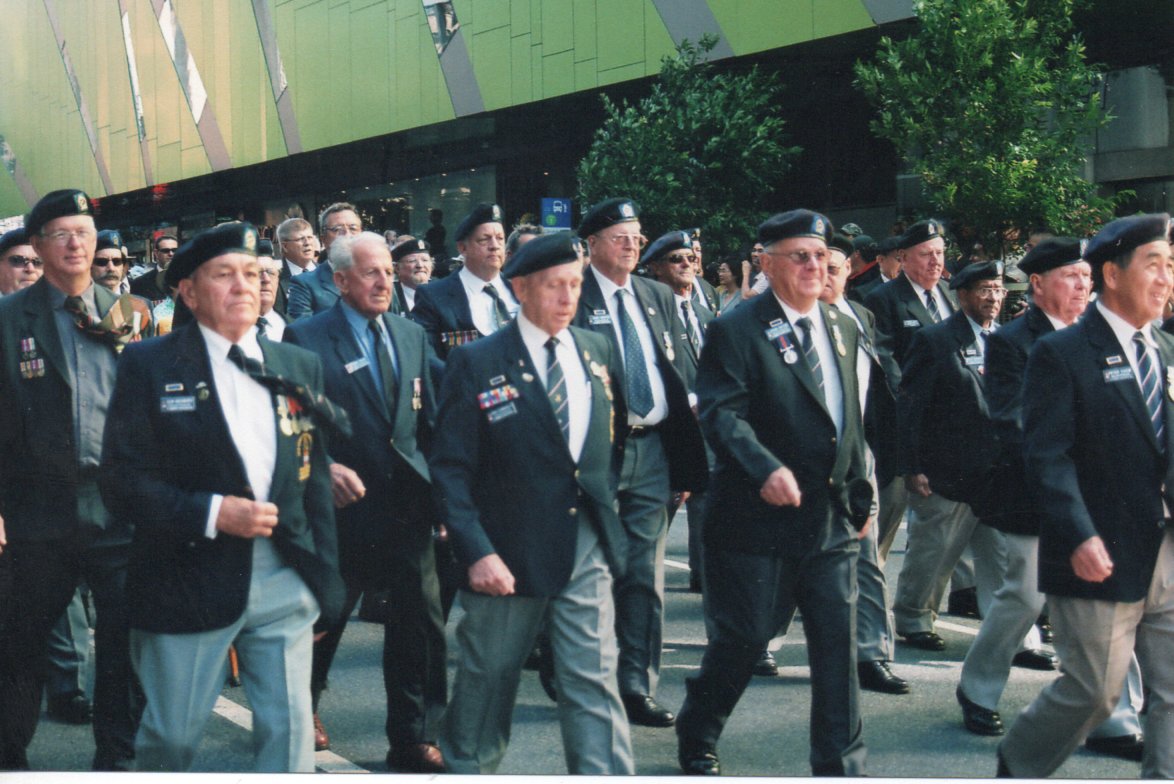 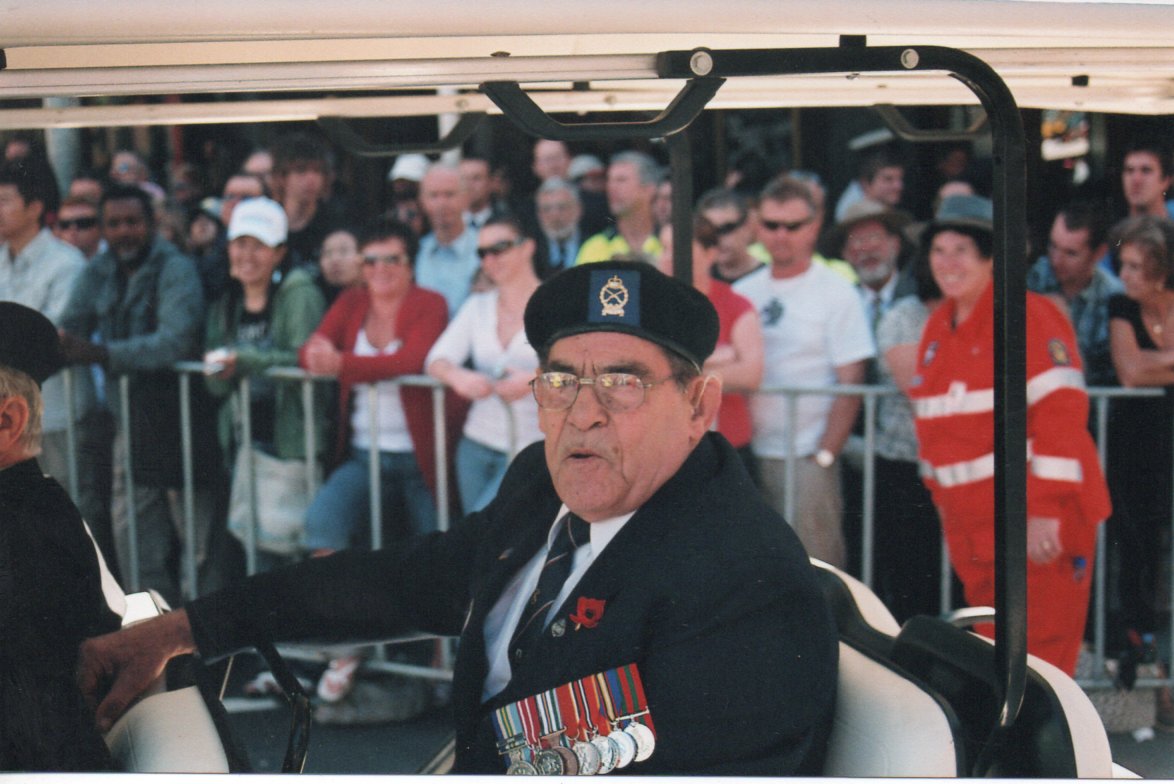 Bruce Inch in a Golf Buggy.   Bruce had travelled from Coolamon NSW. 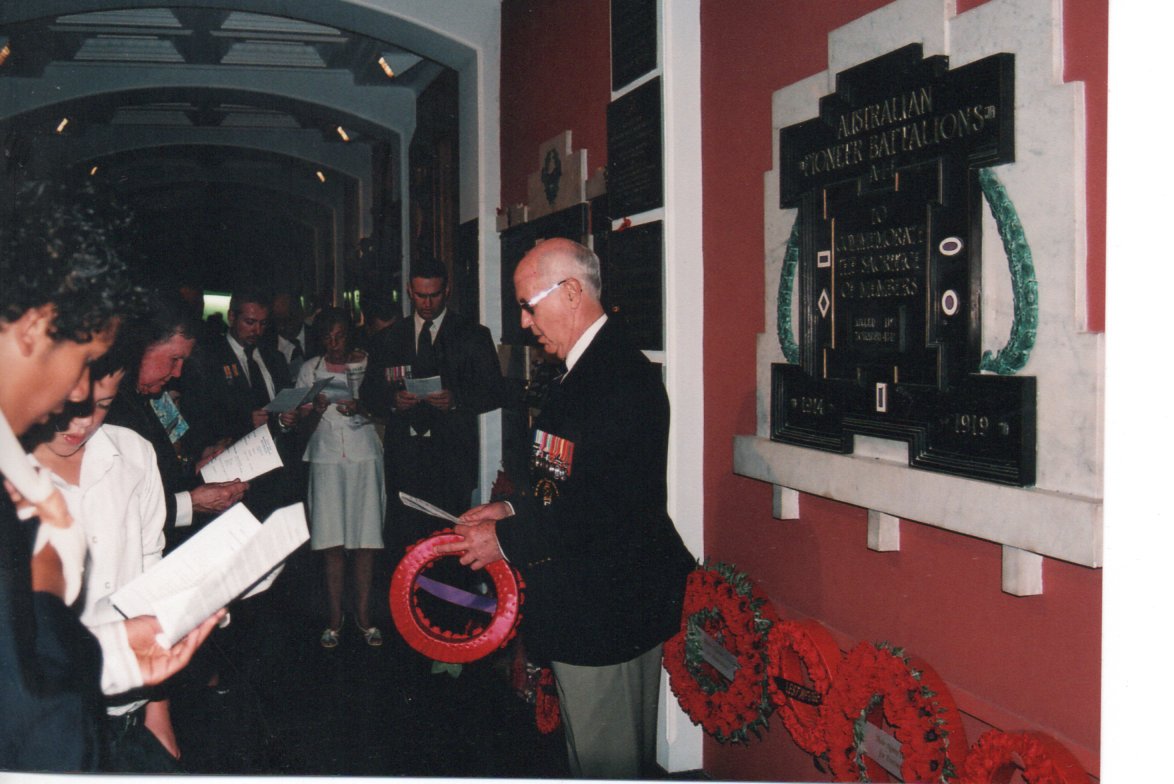 Phil Ainsworth leading the service in the Hall of Memories. 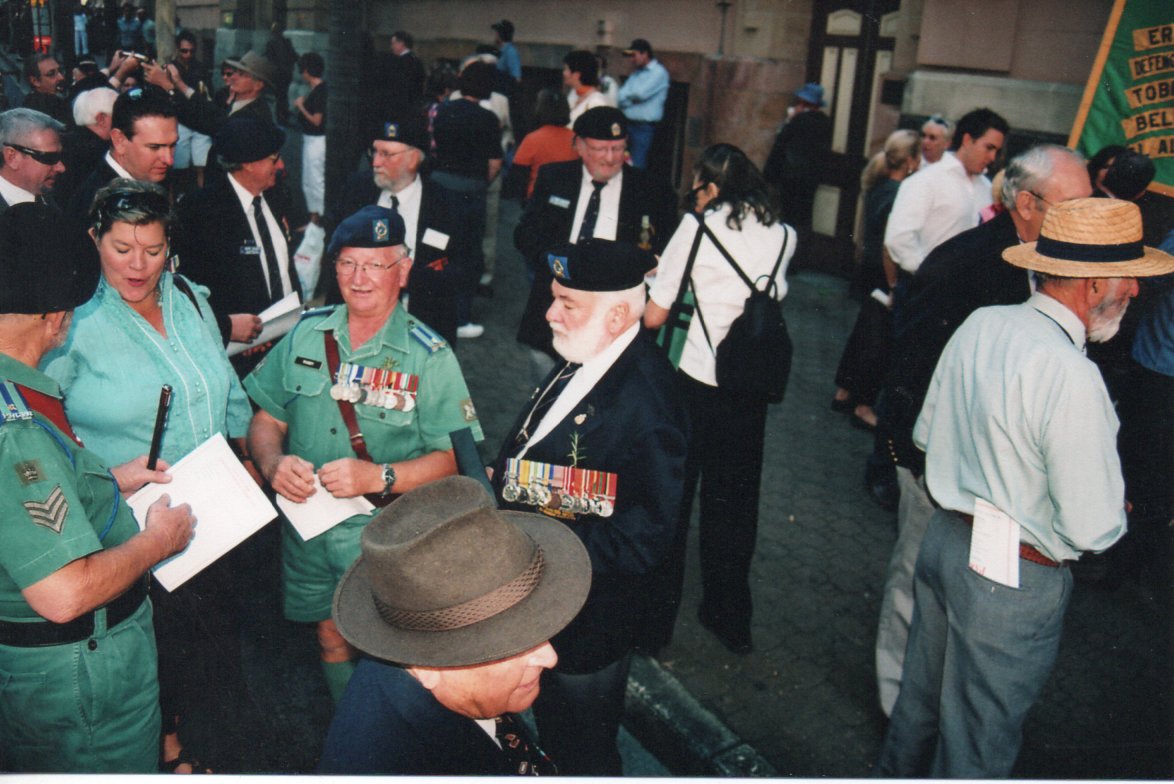 Forming up prior to the March.  Barry Wright and Norm Mundy in Juniper Greens, Bob Collins with them. 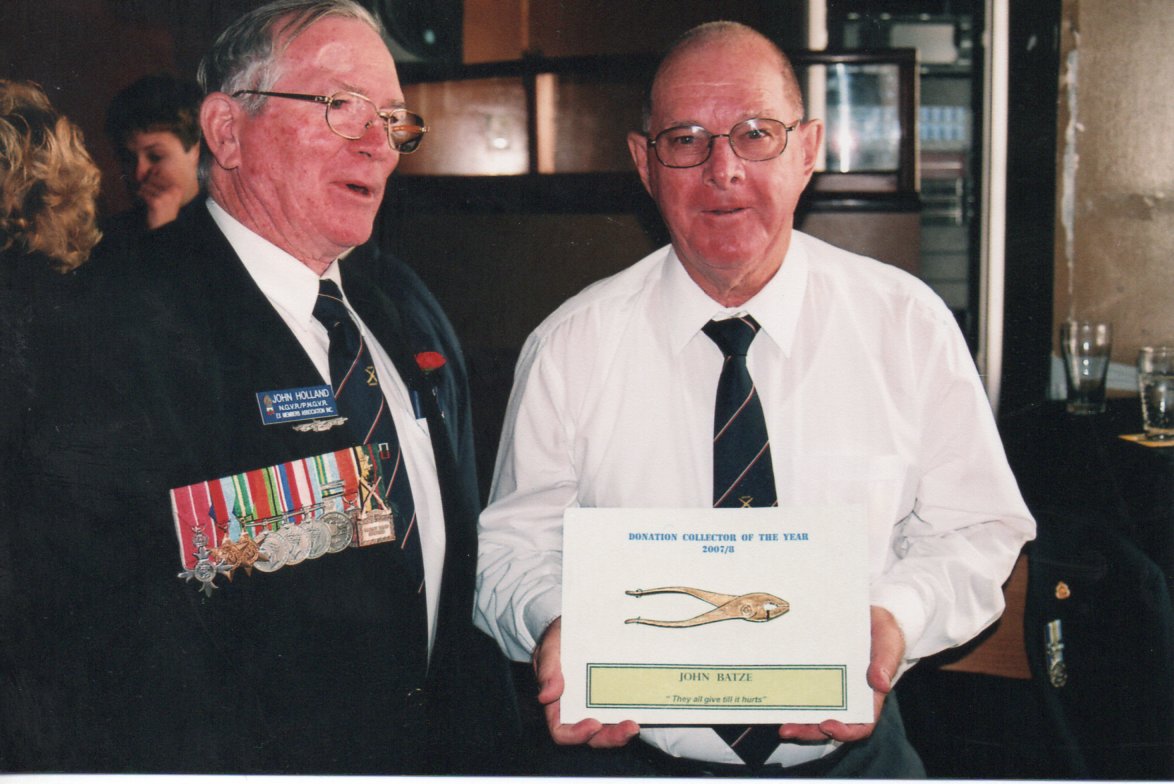 John Holland and John Batze who had received his Certificate for raising funds for the Museum. 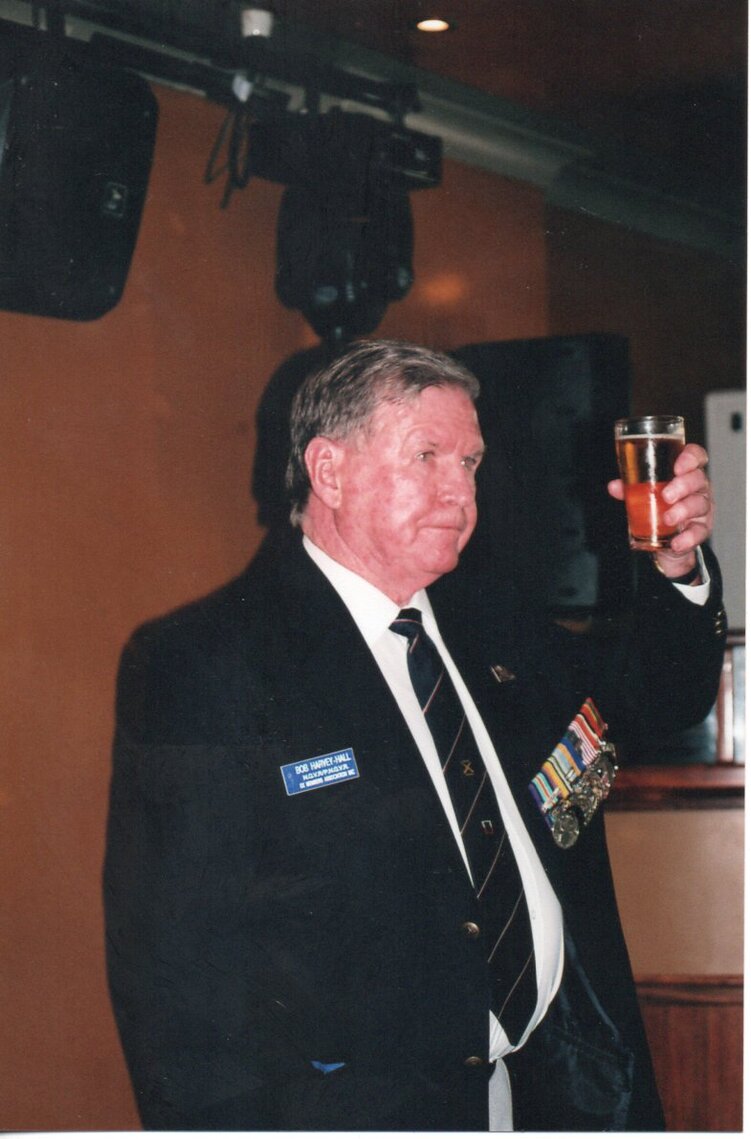 Bob Harvey-Hall responds to a Toast. 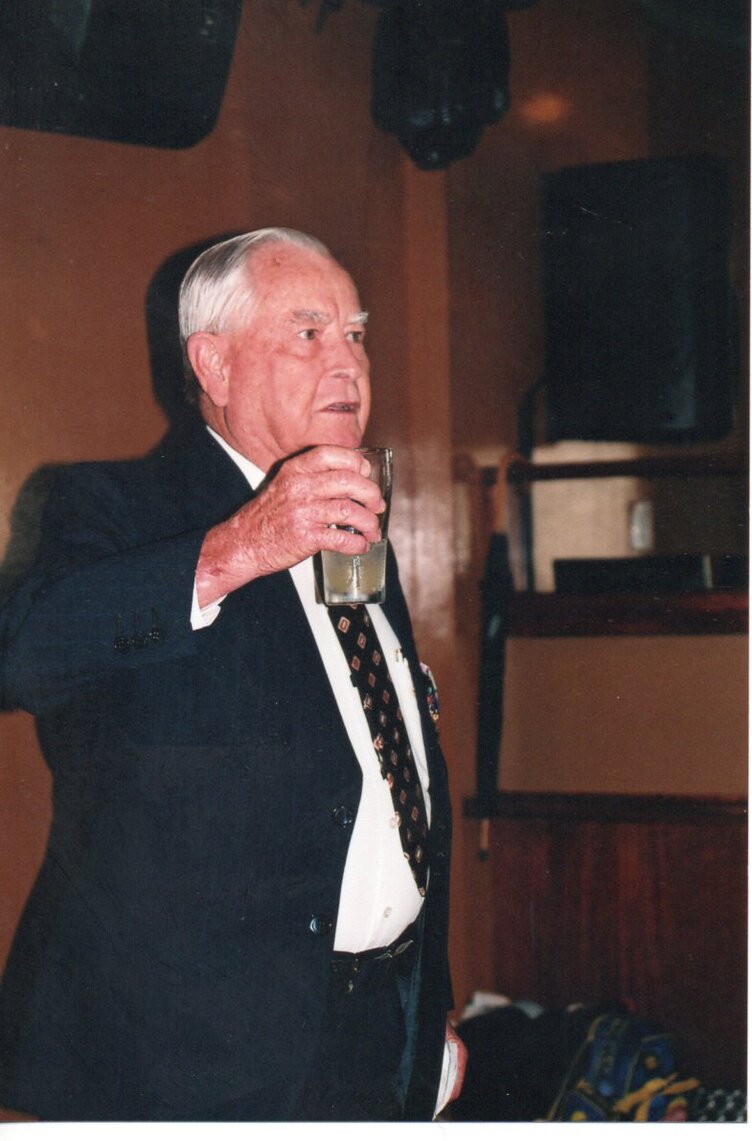 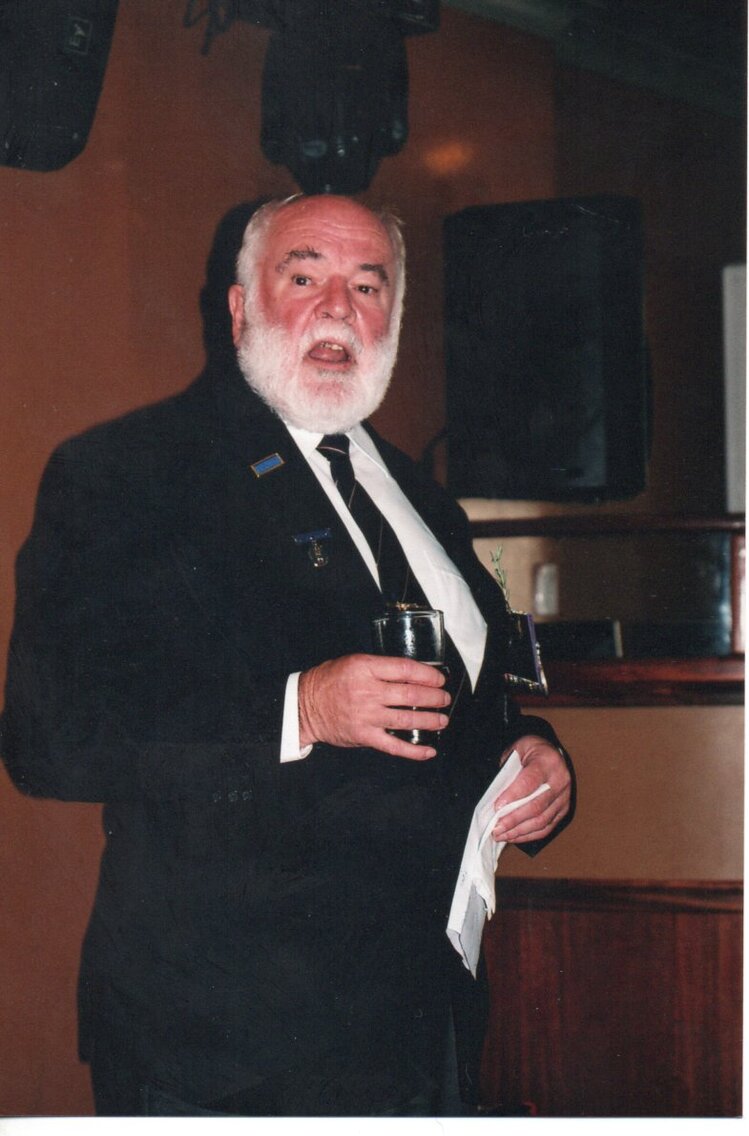 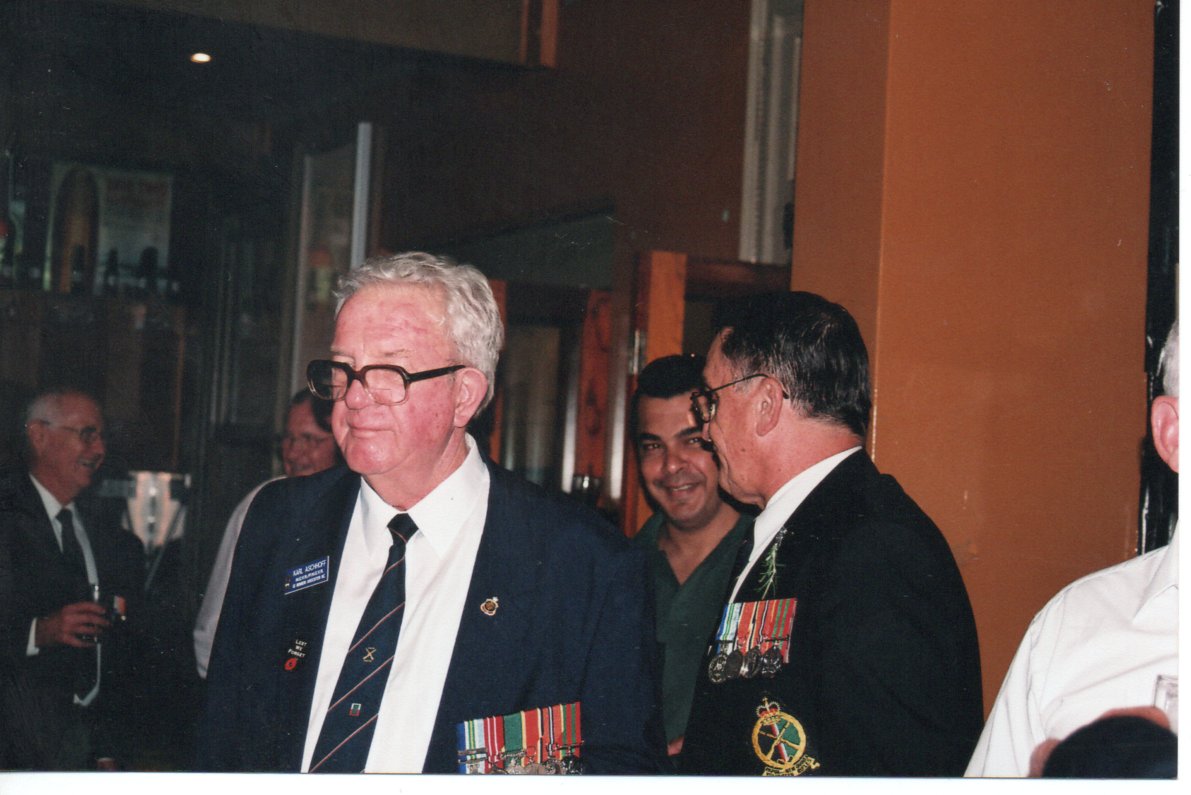 Karl Aschhoff with Mal Zimmerman on his left together with Grant Harbeck.