The first PNGVR Annual Camp was held at Goldie River Training Area, near Port Moresby, in 1959.  Nearly 100 men of the PNGVR attended this camp. Training included map reading, platoon attacks, grenade throwing, mortar and rifle shooting, wiring and mining, night firing, ambushes, gas chamber tests and other combat practices.  A Platoon of PIR was made available for demonstration purposes throughout the camp.

Also in 1959 the first CMF Unit from Australia, the First Mobile Malaria Control Company came to Goldie River as part of their Annual Camp. This was the first CMF unit to hold its annual camp outside the mainland.  Other CMF units were to visit PNG during the following years. 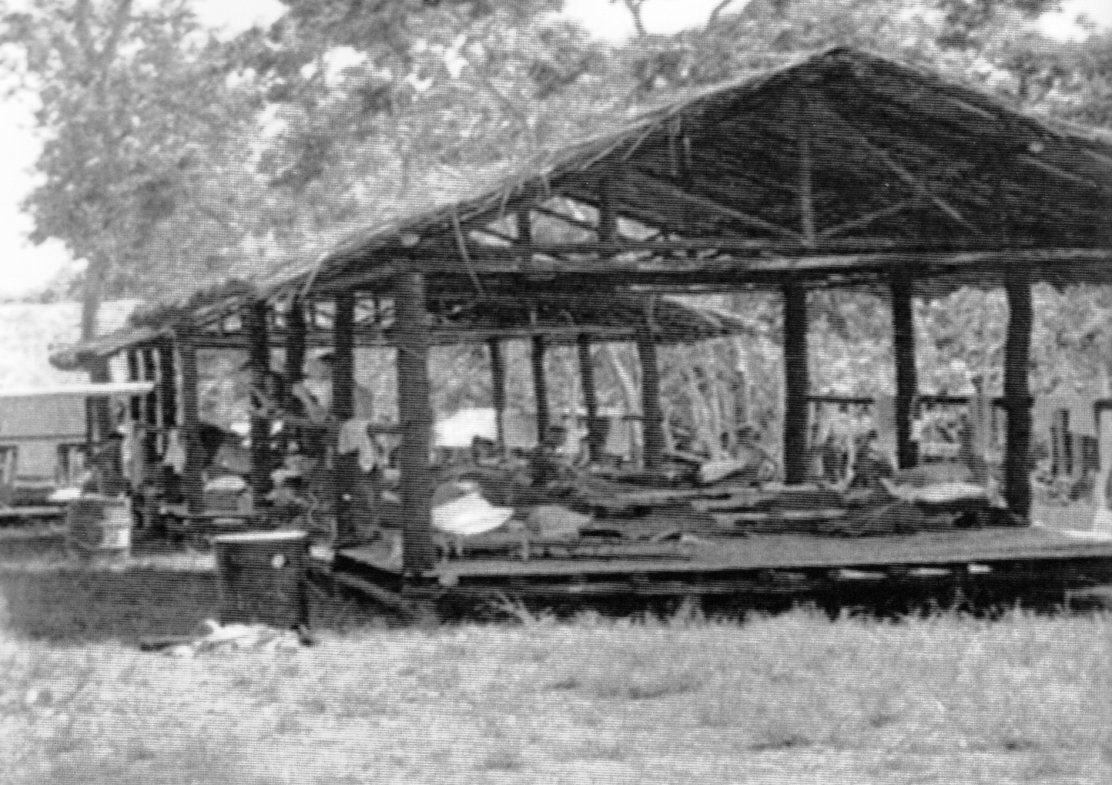 A typical accommodation hut at Goldie River Training Area. 1959
​
1960 - Goldie River
​
The 1960 Annual Camp was also held at Goldie River. The Camp began with an exercise defending Ward’s airstrip which ended with the long march to the Goldie River Camp, with lunch on the Laloki River as a break.
​
One of the soldiers, Pte John Holland, kept his pay slip which showed he was paid 33 shillings and 5 pence a day for the 14 days ($3.35). 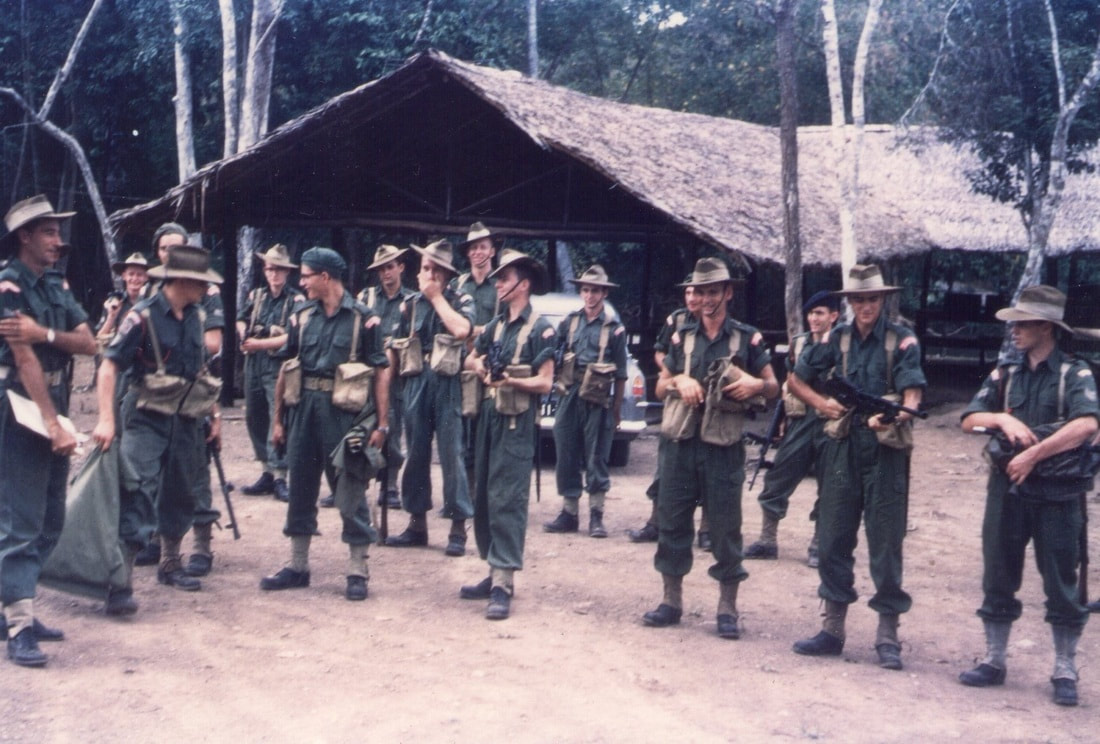 L-R:   Malcom Farland, Ken Dean at rear, Des Martin, Stewart Lewis (with his hand over his mouth),  ? , Pte Dunlop   Allan bell  (3rd from right),Preparing for the morning exercises.  This was the last PNGVR camp where the .303 Lee Enfield SMLE was used. There was still a mixture of old and new gaiters too. 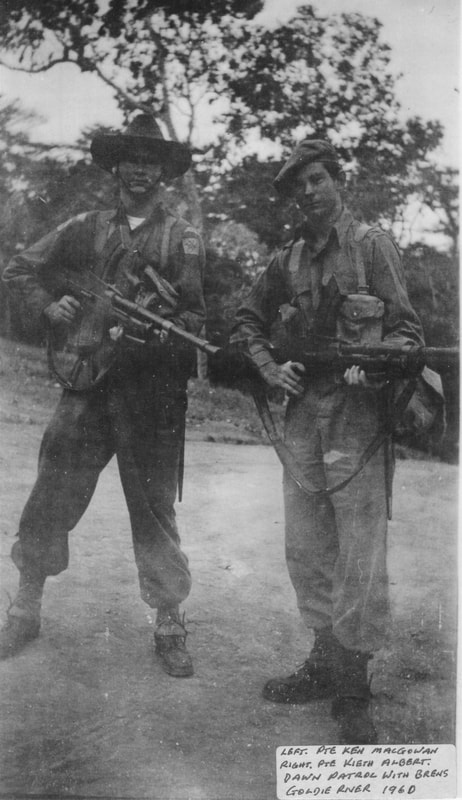 1961 - Goldie River
​
About 80 soldiers attended Annual Camp 1961, also held at Goldie River. Training again was with an integrated PIR Platoon and consisted of the usual Patrolling, ambushes, night navigation and patrolling and river crossings, etc.  On this camp much of the patrolling was carried out with PNGVR and PIR having integrated Sections and PIR supplying the enemy parties.

At the commencement of this Camp the 7.62 L1A1 SLR (self loading rifle) was introduce to replace the Lee Enfield .303 rifle so much time was spent in weapon familiarisation.

One of the exercises was the crossing of the Goldie River via a rope bridge, which was erected one afternoon. Unfortunately heavy rain both at Goldie River Depot and upwater in the Goldie River caused the bridge to be almost under water, so the tactical exercise had to be replaced by careful, non tactical crossings without weapons or equipment. 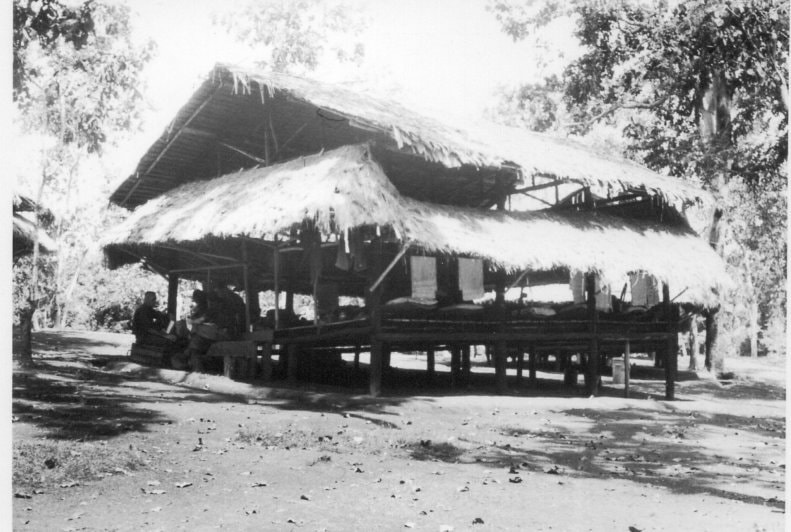 OR's accommodation Goldie River 1961.  The hut had been improved slightly but the bedding (below) was still spartan. 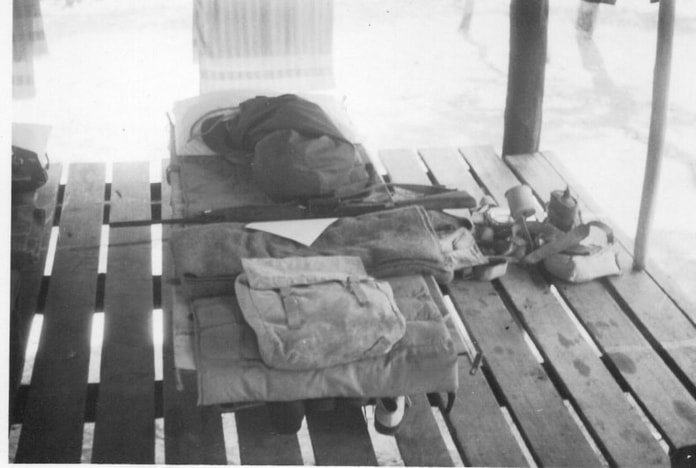 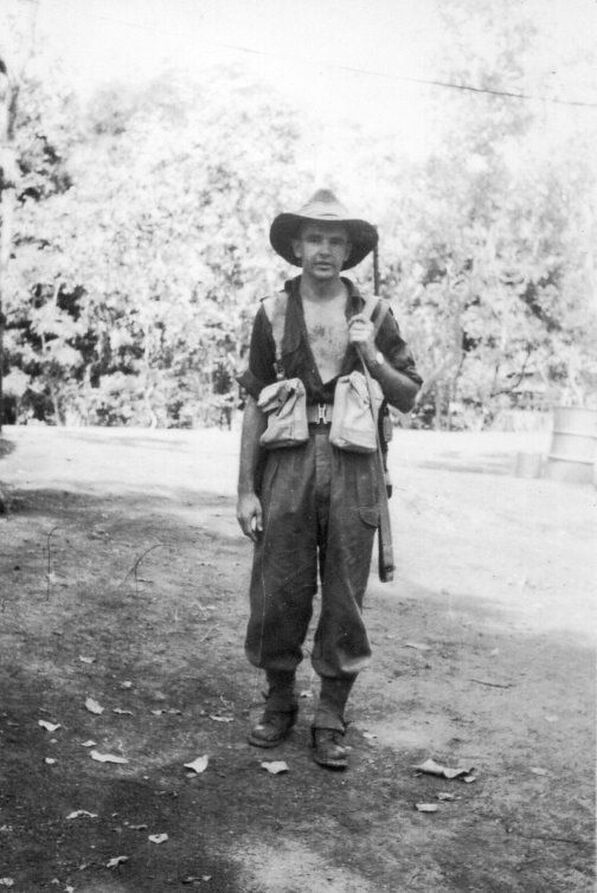 ​​An exhausted Bob Collins returning from a day's exercise. 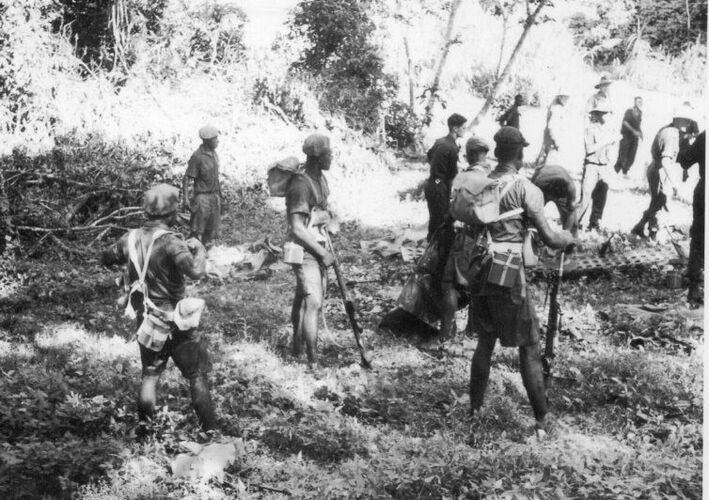 ​A combined group of PNGVR and PIR prepare for a river crossing. 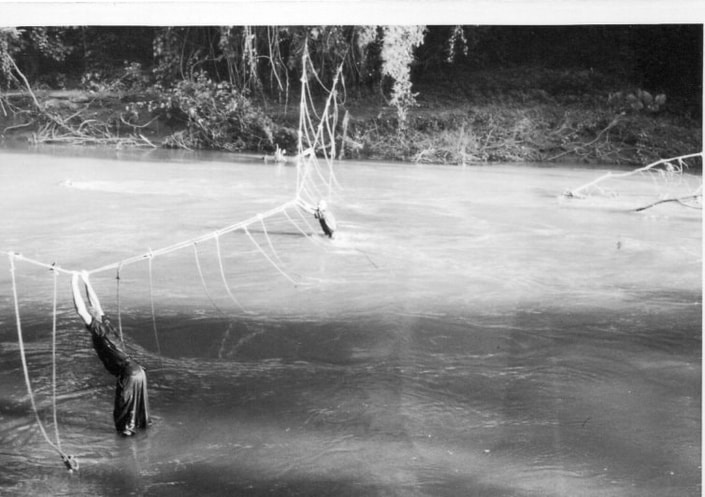 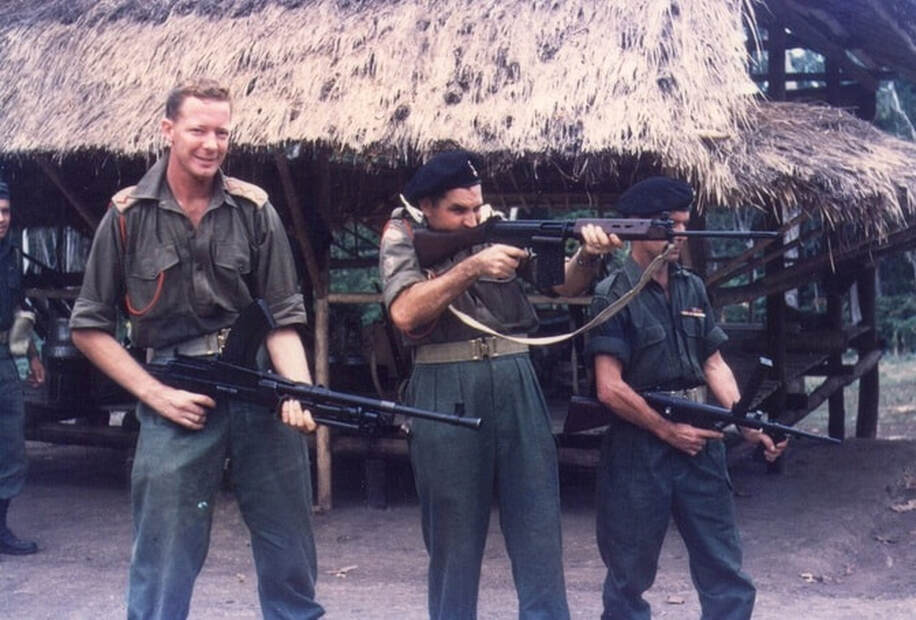 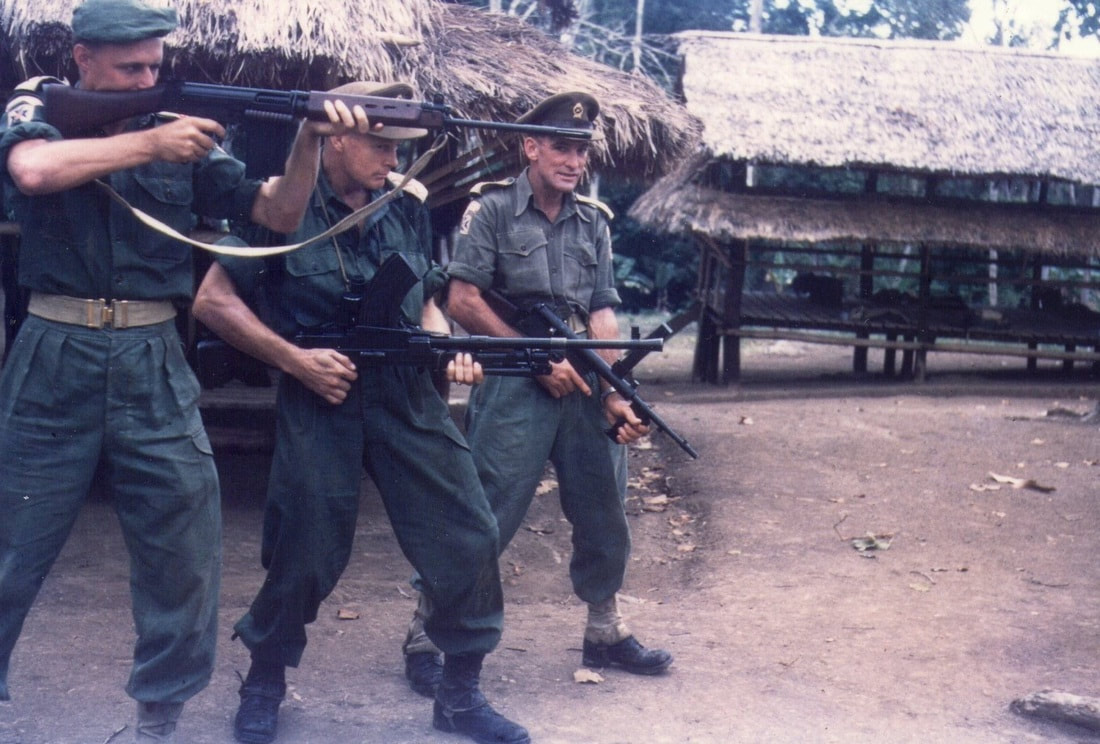 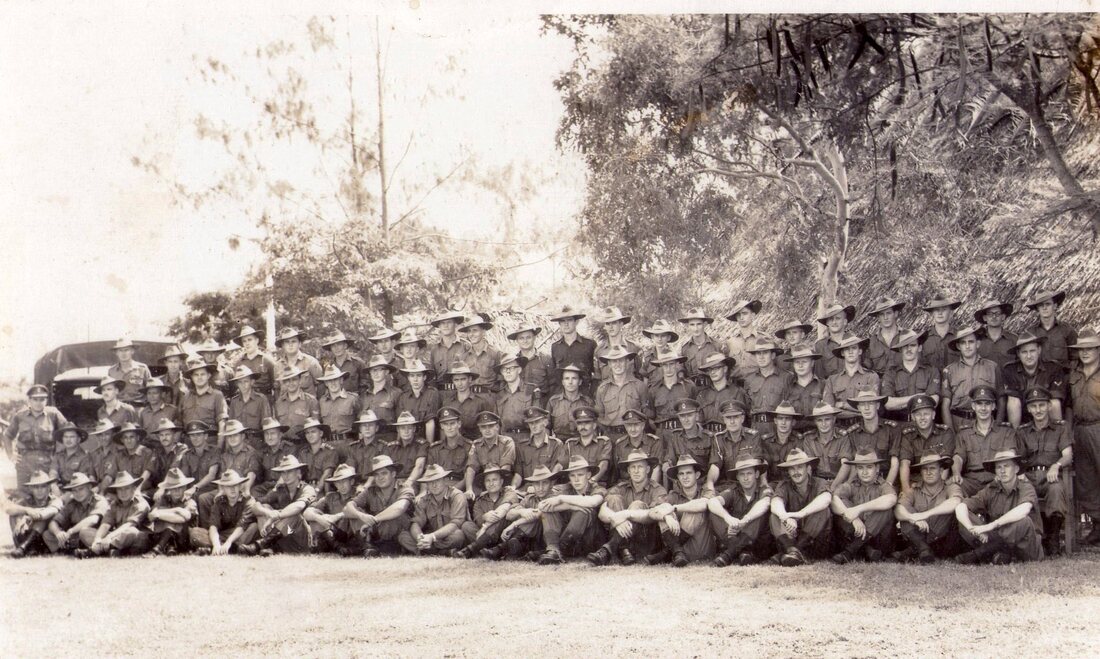 ​The 1963 Annual Camp consisted of the largest number of CMF personnel for a PNGVR Camp, more than 150.  The first week was spent at Murray Barracks carrying out drill and weapon training, followed by a 5 day exercise based in the Goldie River training area with Immediate Action drills, patrolling and minor infantry tactics. During this camp PNGVR was introduced to the GPMG M-60 light machine gun which was to replace the Bren Gun, and the newly completed Goldie River rifle range received a lot of use.
​
Annual Camp 1963 was PNGVR’s last use of the Goldie River Training Area.