Once again our Qld weather looked upon this day of Anzac with favour giving us beautiful sunshine for this, our most important day of Remembrance, as we say in Qld "Beautiful one day - perfect the next".

We arrived at the Stock Exchange Hotel where members of the Committee were flat out with display and venue preparations for the day's activities for the enjoyment of Members and guests after the march.  We moved up to the assembly area in George street about 0930 hours where we met our Regimental Comrades and, of course, we started to catch up on the gossip of the last twelve months.

Our number came up to join the march with our contingent led by Col. Harry Green followed by myself (wearing Juniper Green), then the flag bearers and the wreath, carried by young Jammie Bell, followed by the Banner and the main contingent with a total of approx. 95-100 members.  Once again we had the much welcomed and appreciated services of the 9RQR Pipe Band leading the contingent with a number of NGVR and PNGVR members in a command vehicle in front.  Once again thanks go to George Bagajluk for organising the Band.

Judging by the playback of home videos and the ABC coverage, we may be a bit older but we have not lost our touch.  Our contingent looked splendid with members in their dark blue jackets, berets, ties, medals and flags. Congratulations to all members who travelled from near and far to ensure that our Regiment was well and truly represented.

After the march most members proceeded to the Shrine of Memories in Anzac Square where we conducted a memorial service to the Fallen.  The following Service will take place each year in Brisbane on Anzac Day:-
​ -   Welcome address
-   Prayer for the Fallen
-   Last Post
-   Moment of Silence
-   Ode
-   Reveille
-   Final Address.

We had a good attendance at this moving service.  We then proceeded down to the Old Stock Exchange Hotel to exchange a few yarns, drink a few jars and view the comprehensive display of Association historic material.

On the official side, Col Harry Green addressed the reunion, welcomed the acting Consul-General and members of the PNG Consulate, visitors and read out apologies from members who could not attend.

It was at this time that the acting Consul-General of PNG, Mr Vagi Hani, presented the flag of his country to our Association.  Secretary Col Gould accepted the flag on behalf of the Association.   All members appreciated this gesture as it binds our two nations together in friendship.  During the reception drinks and finger food was served.  The drinks lasted well into the afternoon, but there was a slight problem in getting the food trays past some members who frequented the servery area.  The Committee is going to discuss this issue of food quantity and distribution for next year.

Many of us stayed until late afternoon while I believe others stayed to attend the evening Disco - yes Disco.  Overall the day was a great success with many old friendships renewed.

In conclusion I would like to take this opportunity to thank those Committee members and members who worked behind the scenes to make this day memorable for all concerned.  Special thanks to Col Gould for venue set-up, John Holland & Ken MacGowan for the display, Bruce Crawford for door duties and to those members who assisted from 0600 hrs on the day.  Our thanks to Neal Lega who watched over our display during the march.   Special recognition must be given to those who travelled to Brisbane to be part of this special day.  Tony Milan (Port Moresby), Ken MacGowan (Vanuatu), Ken Shorthouse (Mauritius), John Batze, Stan Carswell, Bernie Gough (all Cairns), Brian Pierce (WA) Gil Harvey-Hall (Townsville), Karl Aschhoff (Charleville), Jes Hansford (Murrays Run), Brian Crane (Port Macquarie) Bruce Inch (Coolamon), Ivan Old (Camden), Ian Sayers (Canberra) and Harold Osborne (NGVR Victoria).

It was also very pleasing to see so many of our NGVR comrades in attendance.  This shows the comradeship that exists within our Association.  Well done fellows. 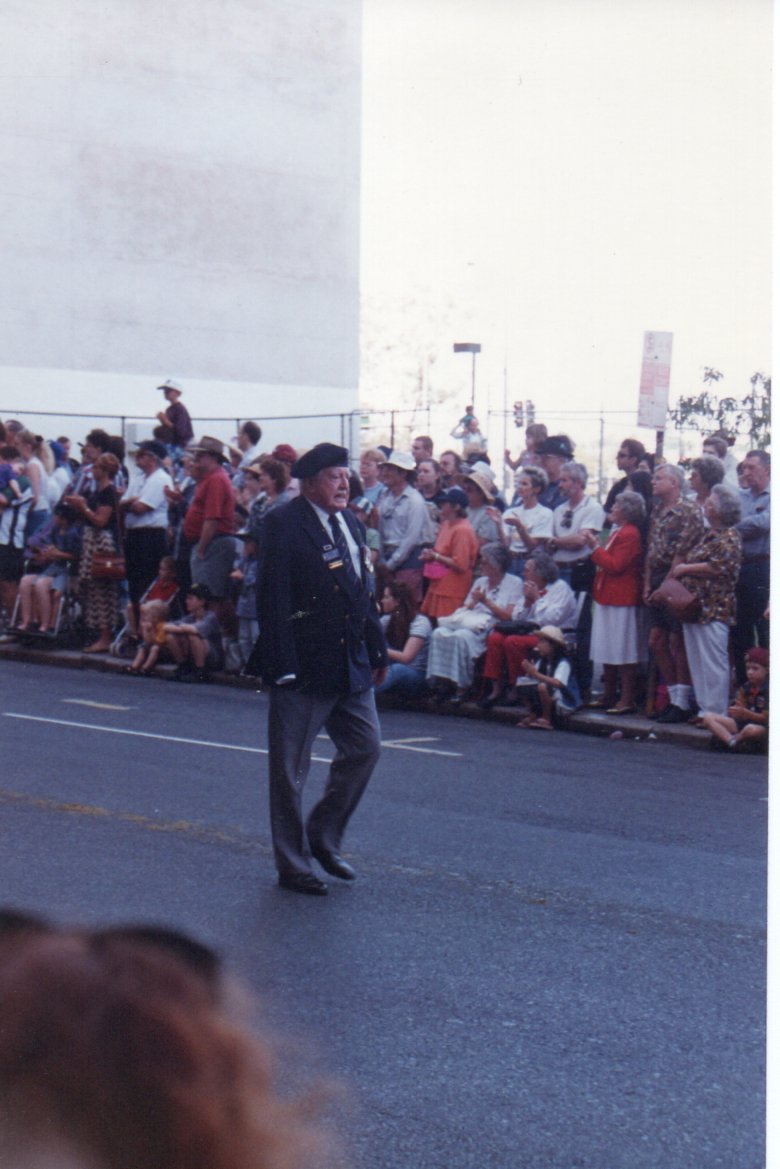 Above: Harry Green leading the march.  Below: Joe Fisk in his Juniper Greens 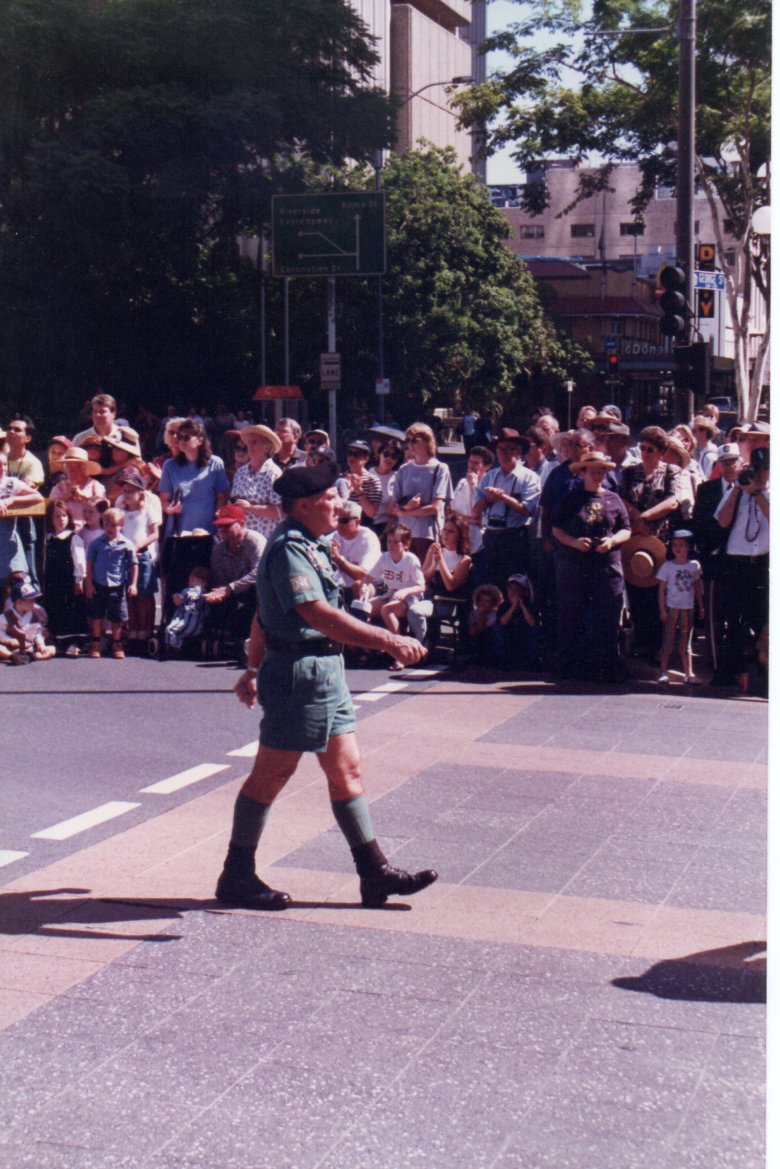 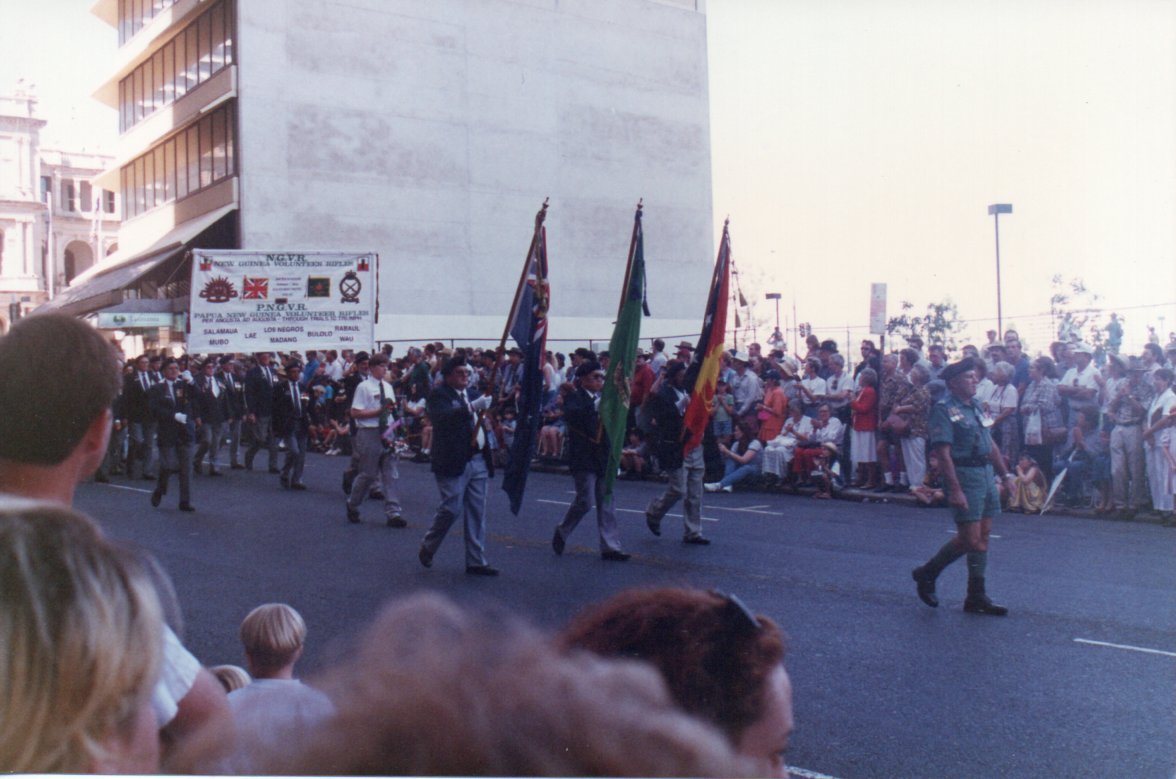 Above and the following 8 photos. The Marchers. 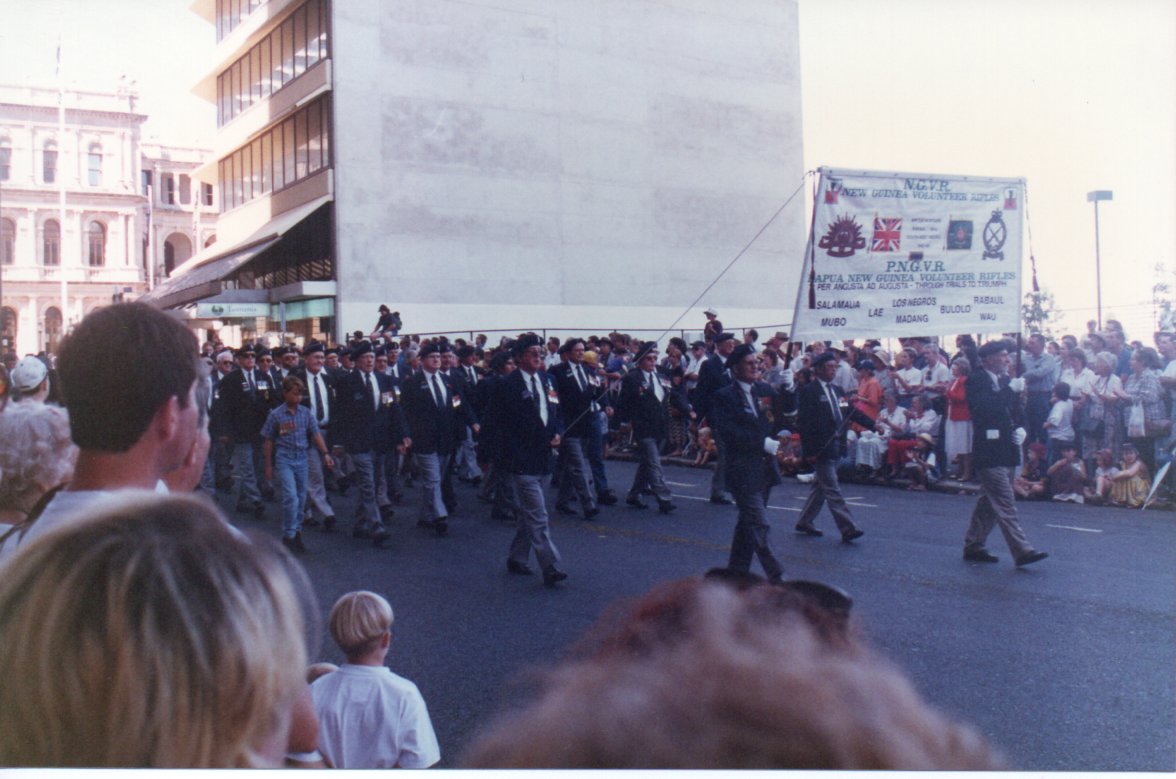 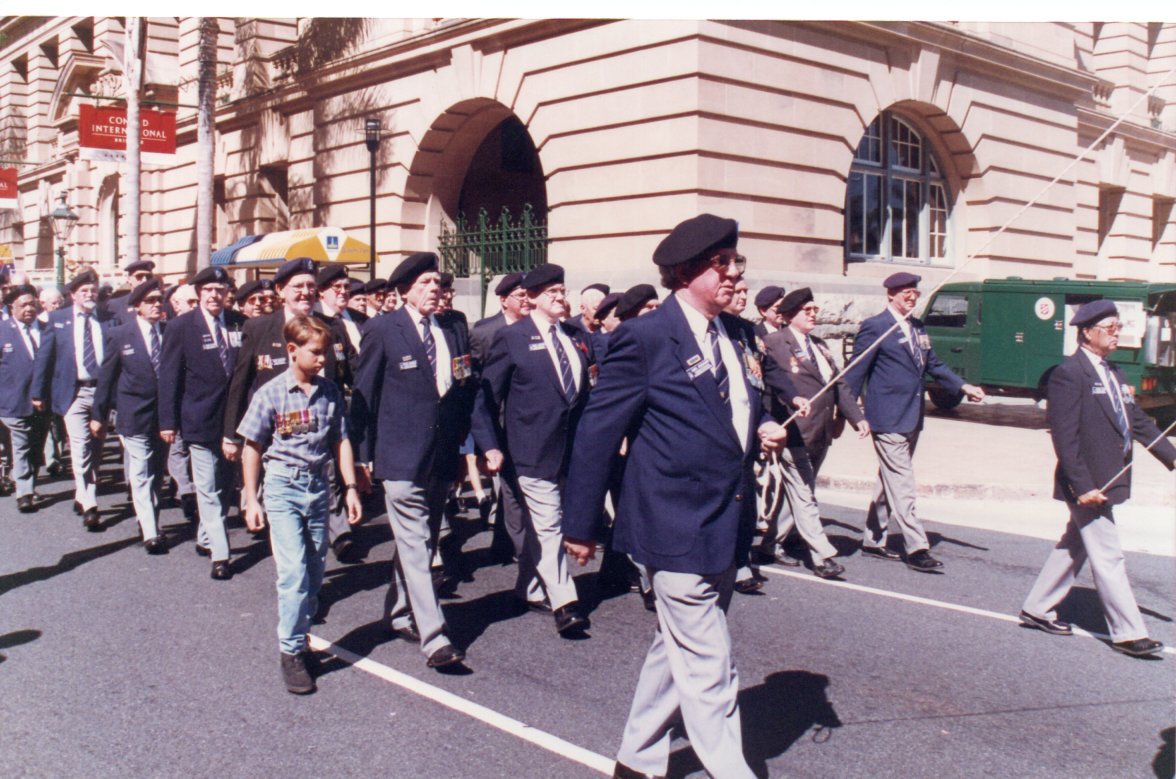 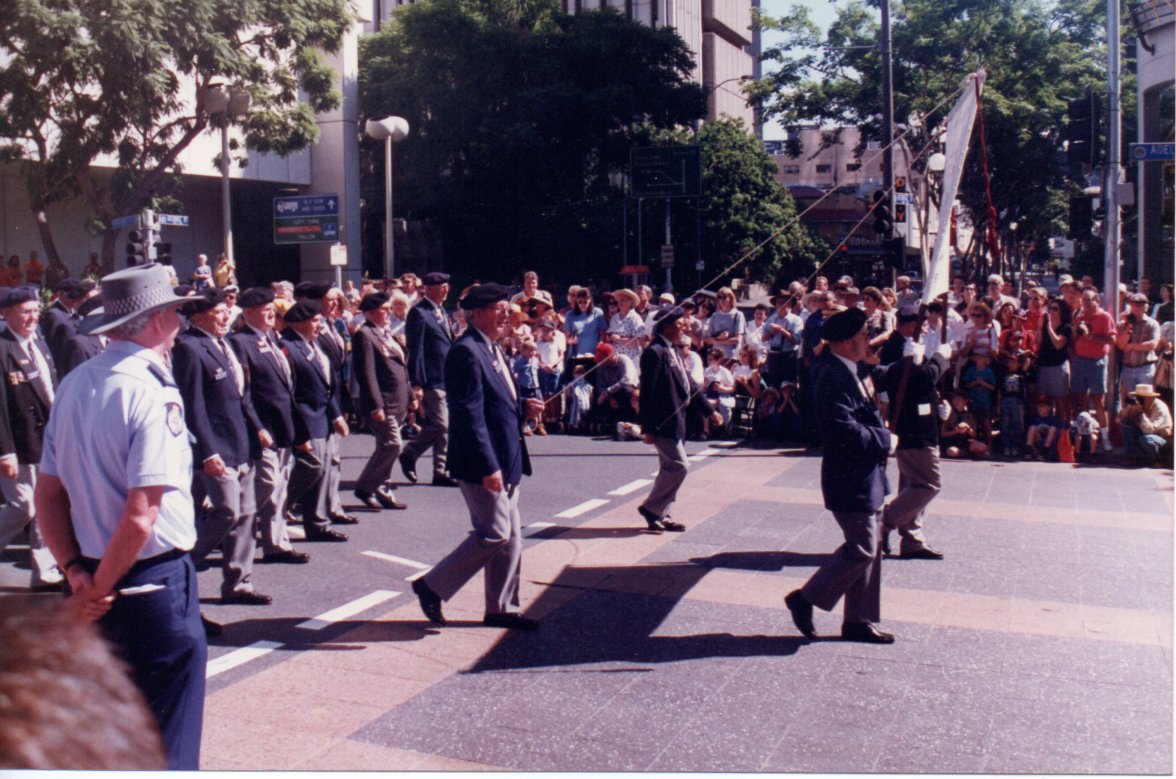 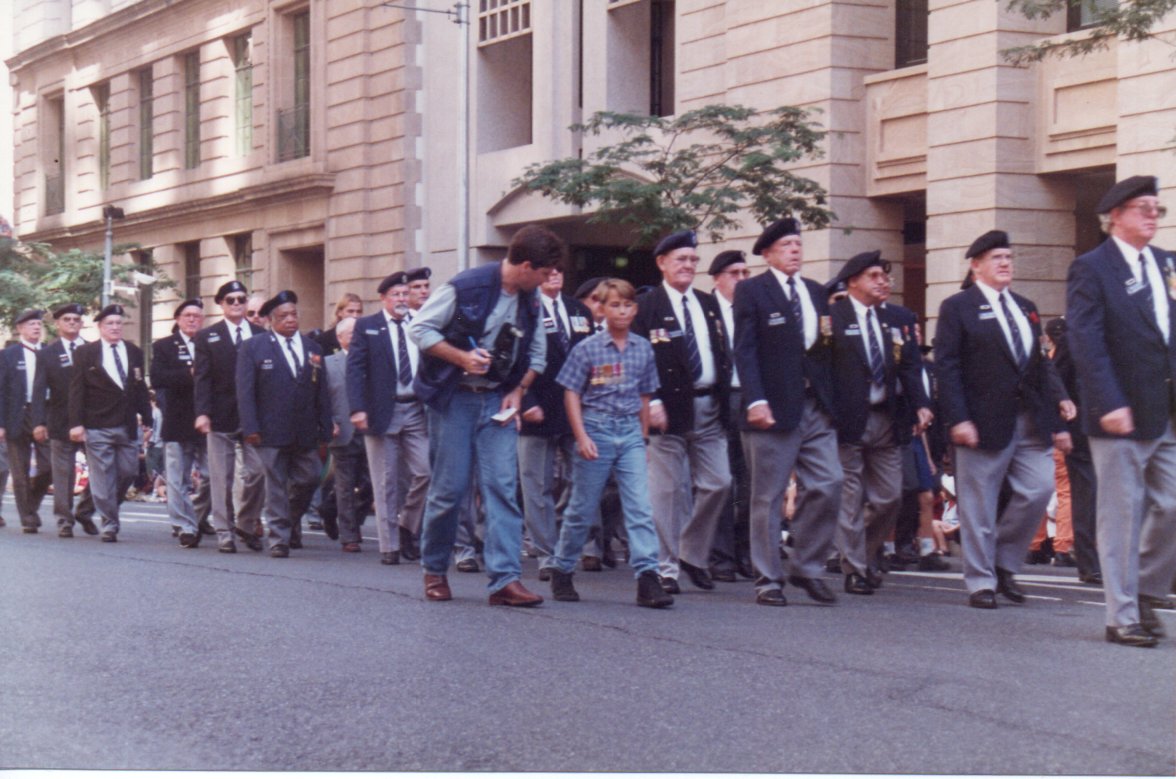 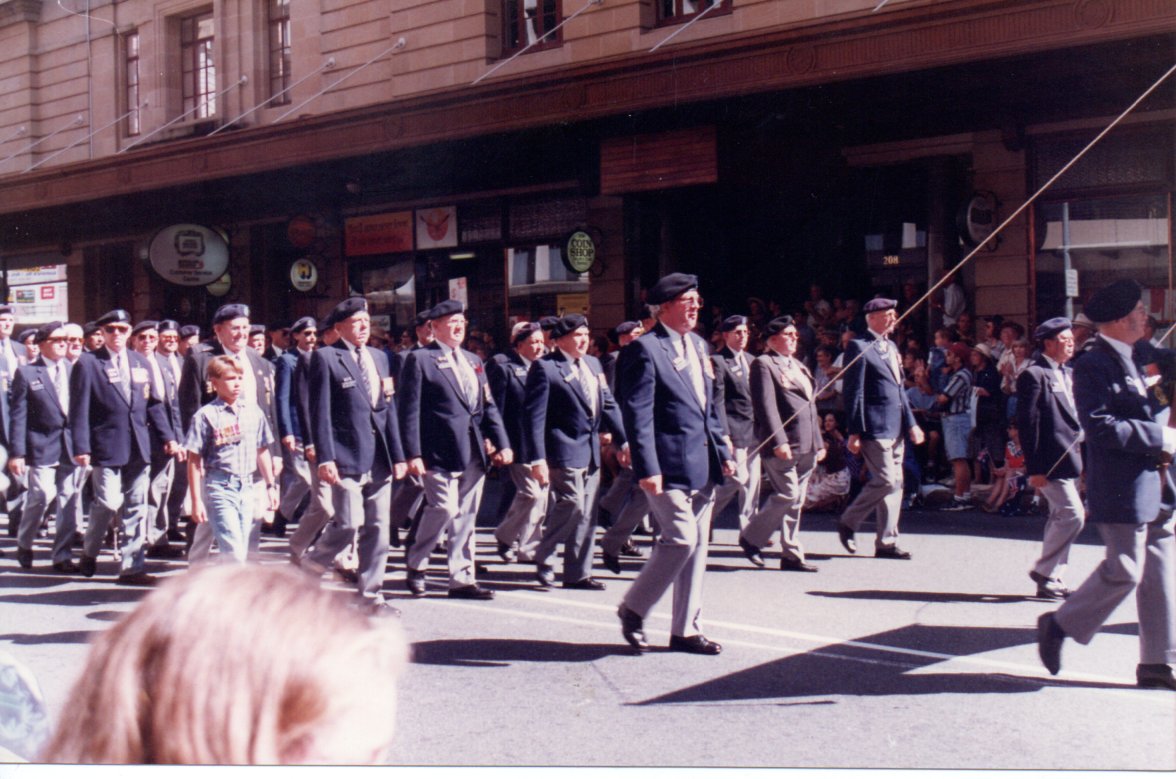 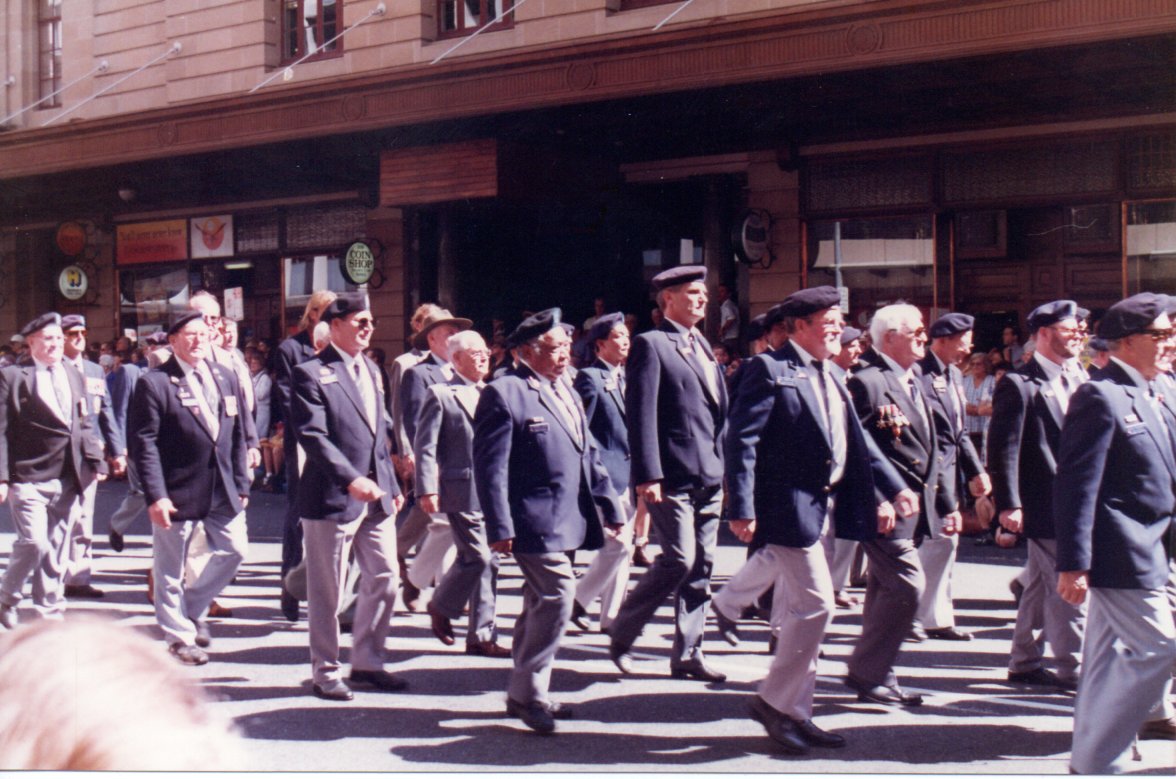 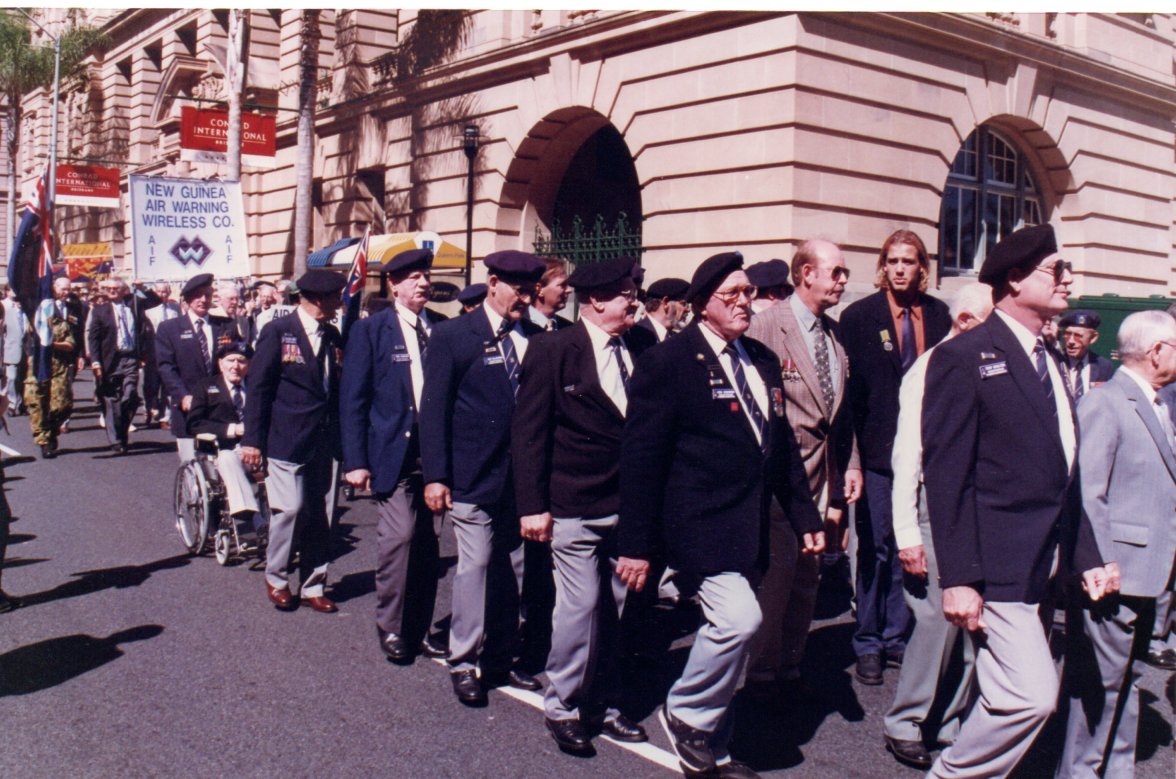 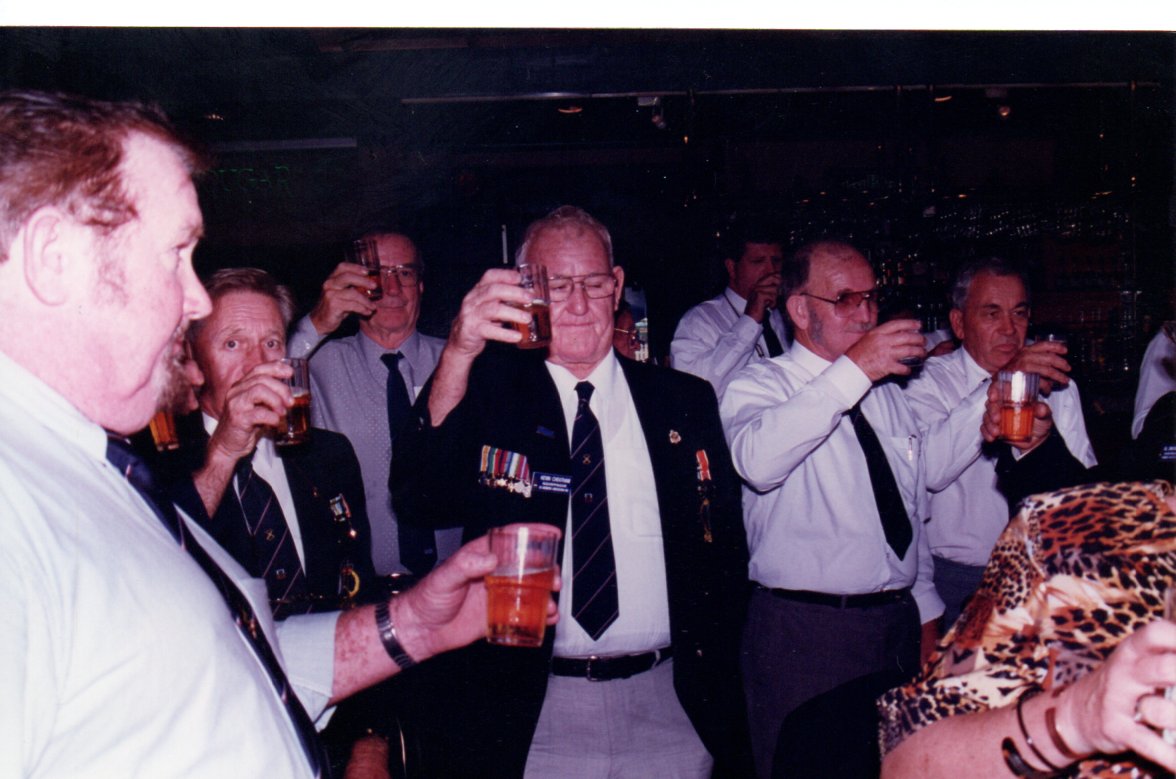 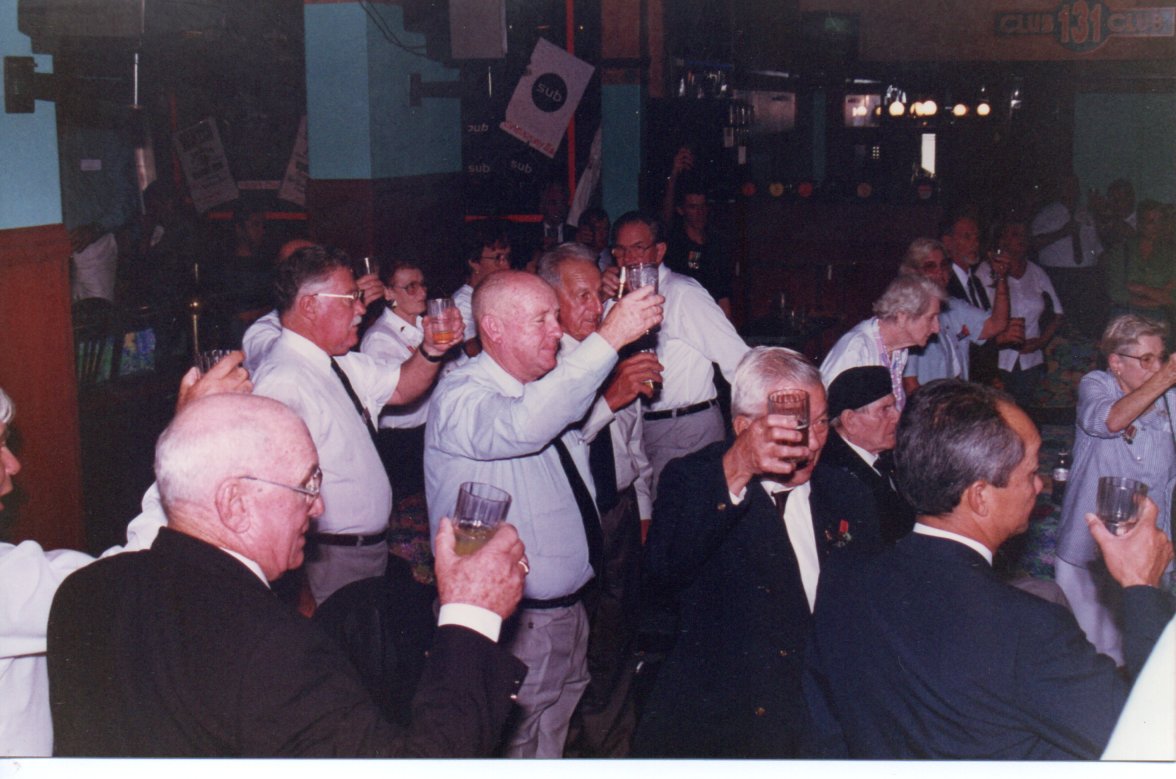 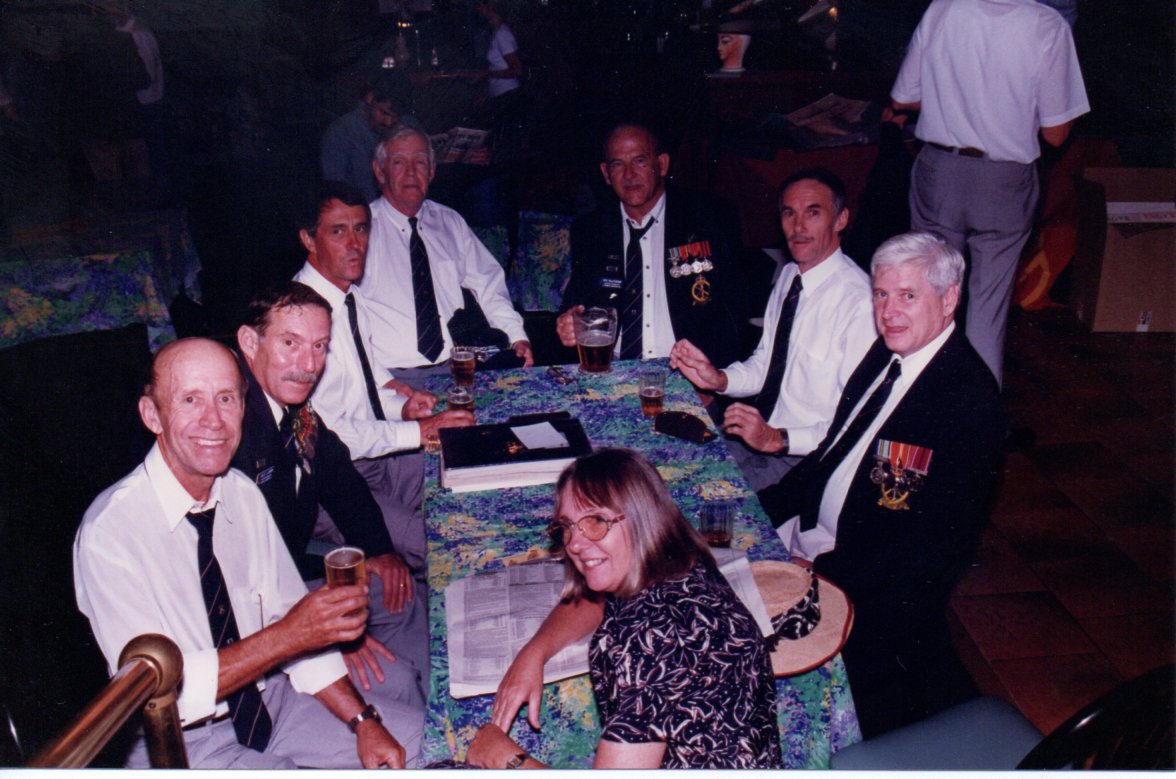 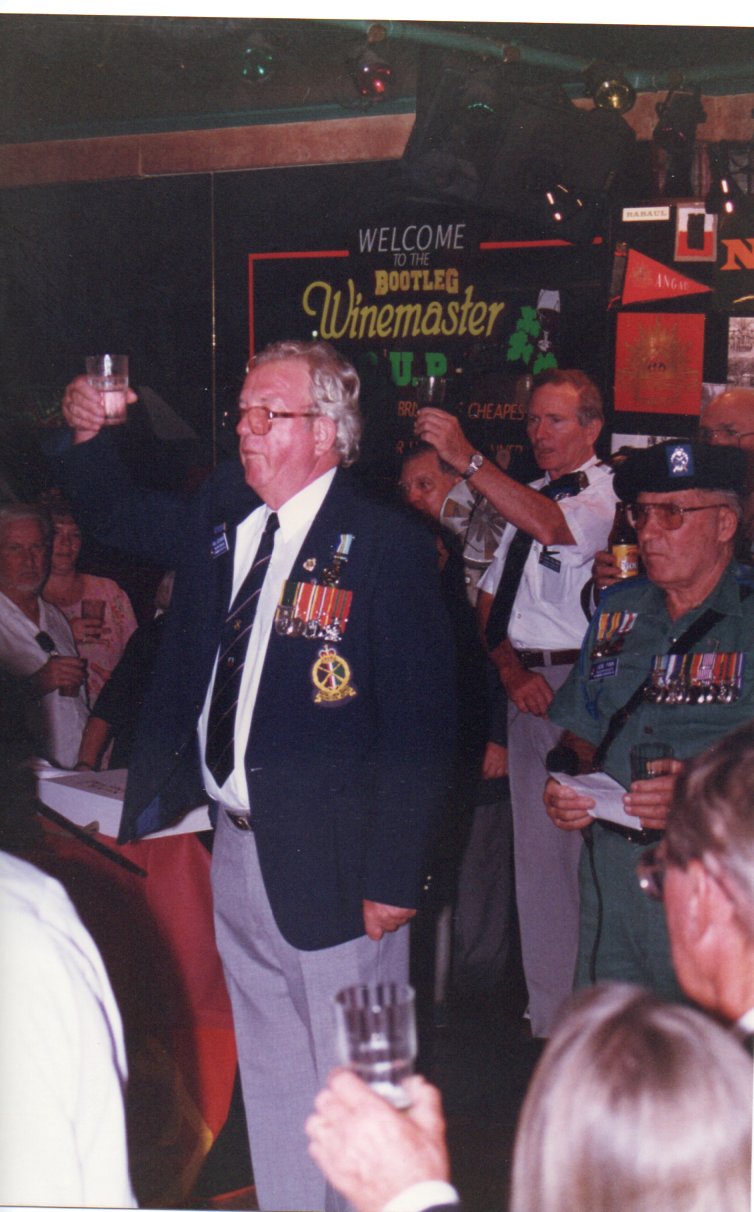 Karl  Aschhoff proposing a toast. Karl later burst into songs - he had an excellent singing voice.