Annual Camp 1964 was held at the Mt Ambra camp near Mt Hagen where some 2,000 acres of land had been obtained and, under the supervision of SSGT Phil Robb, C Coy, PNGVR, an extensive camp setup had been constructed of native materials.  1964 had also seen the introduction of PNG Nationals and other Nationalities into PNGVR and attendance at the Annual Camp was in excess of 350.

A rifle range had been constructed and training concluded with a 4 day exercise with C Coy being the enemy.  C Coy used local knowledge to crawl carefully one after the other through the high kunai grass leaving behind only what looked like pig or animal holes.

Mt Ambra was at an elevation of over 5,000ft and some of the coastal indigenous troops suffered from sunburn, not being used to the altitude.
​
After the 1964 camp the practice of European PNGVR soldiers wearing a slouch hat and indigenous and other soldiers wearing berets came to an end.  From then on, all ranks and members of PNGVR wore berets.​
​ 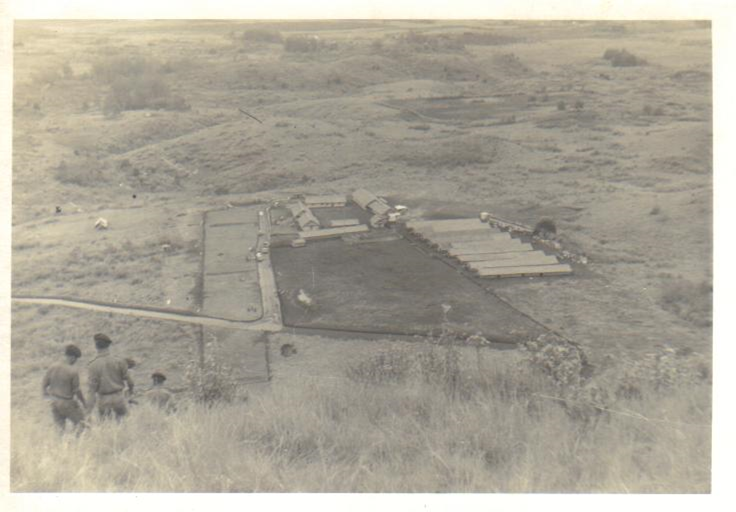 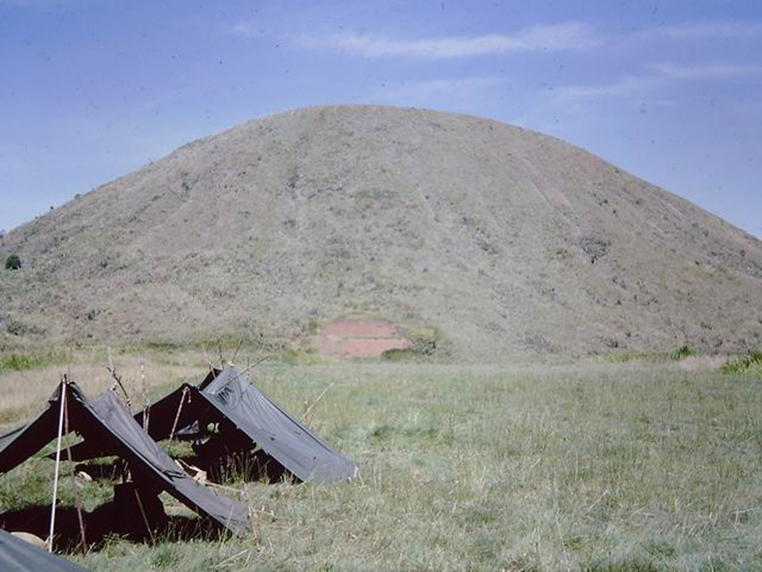 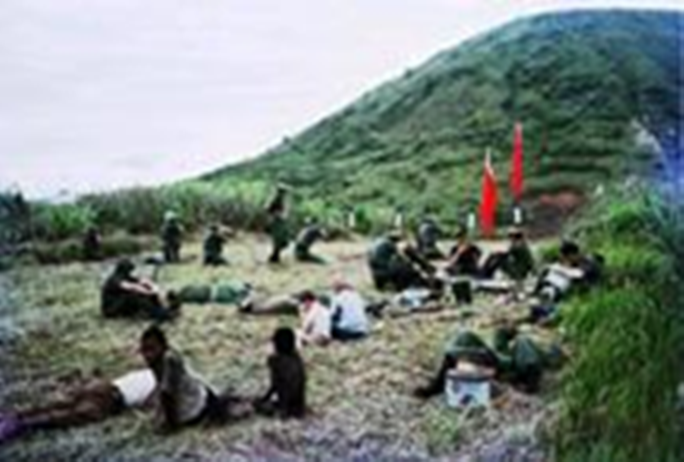 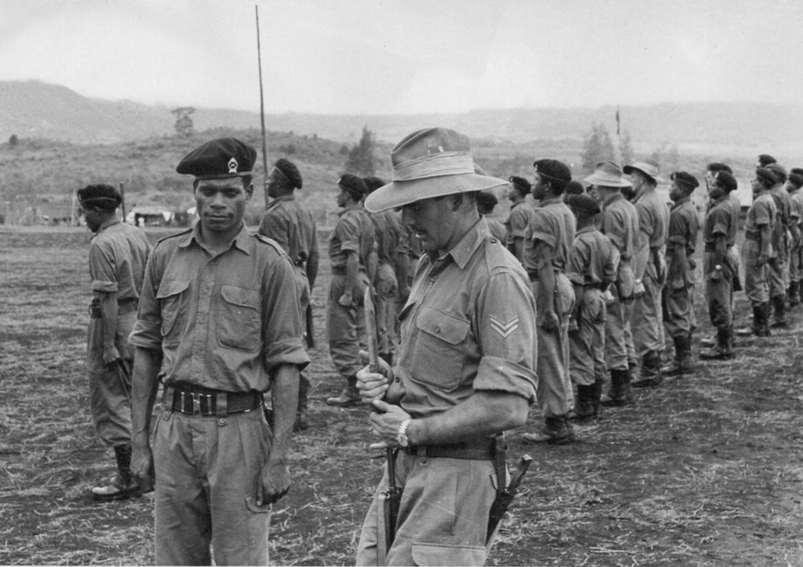 ​Cpl Bob Collins (with slouch hat) demonstrating to Pte Unaro (beret) how to "Fix and Unfix Bayonets" during a C Coy lesson.
​In the background can be seen European soldiers in slouch hat and Indigenous soldiers in beret. 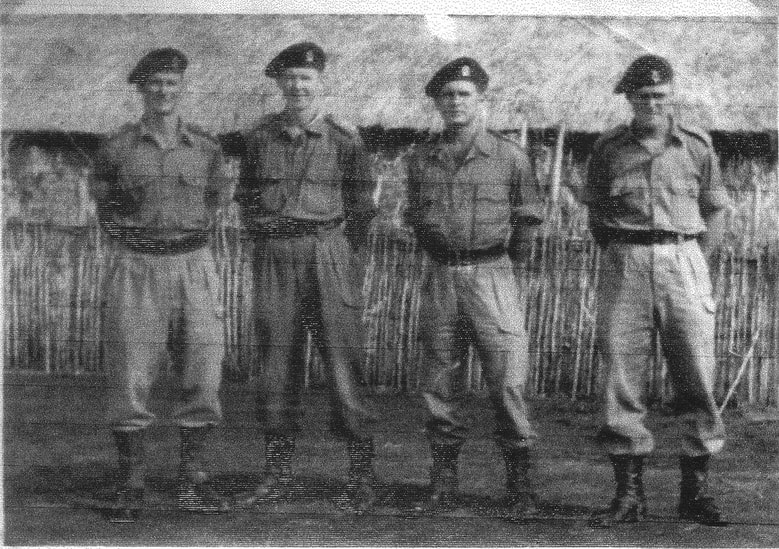 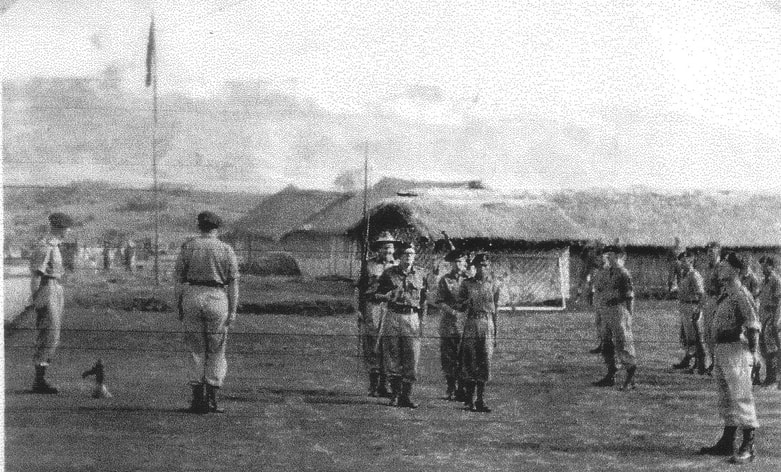 Annual Camp 1965 was also held at Mt Ambra, attended by more than 400 troops. Fourteen aircraft charters over four days were required to lift the men and equipment from their depots. Some troops travelled by road from Banz and Kainantu.

Training was extremely varied, all battalion weapons were employed, including a 3.5 rocket launcher. The local economy received a boost with the provision of fresh food for the camp and the hiring of local labour.

1965 also saw a heightened tension with Indonesia who had taken control over what was Dutch New Guinea.  Weekly, a Merparti Nusantara DC3 flew from Indonesian New Guinea to Lae. The aircraft was not allowed to divert from the direct flight path and could only land at another airport in PNG in an emergency.  However the aircraft was seen over Mt Hagen and Madang at times.

One problem facing the Army was the fact that the Mt Ambra site which had been purchased in 1964 from a local village tribe for 600 pounds had not been paid for.  Lt Col Bishop had this amount flown in to Mt Hagen in shillings and the money was paid at the Mt Ambra camp. Despite an effort by the new CO to recruit Cooks so that civilians did not have to be flown in from Australia for the Annual Camp, this did not eventuate, and civilian cooks again did the cooking at Mt Ambra.

One serious situation which occurred was a fire racing across the kunai grass adjacent to the Camp.  It was while this was raging that the CO came up to Sgt Peter Rogers  (later Maj Peter Rogers DFC) wondering “who was the bloody idiot that set the grass on fire?”   Peter wisely said nothing as he had shortly before been getting rid of some date expired parachute flares.

It was after this camp that the pay dispute between Europeans and locals became an issue.  For attendance at the camp, a European Private was paid 37 pounds, plus allowances for those married.  A native Private was paid three pounds eighteen shillings and sixpence.  This led to Company Commanders ensuring that the pay differential was explained to new recruits before attestation.  Very few declined to enlist because of the lesser money.

The pay difference can be more easily shown by the fact that two of the members of 7 Pl C Coy PNGVR were Privates Allan Taratia and Geoffrey Timu.  Allan was a medical doctor and Geoffrey a dentist.  Both had trained at the Suva Medical College, Fiji, and were working at the native hospital in Goroka.  Both had enlisted to serve their country and were not interested in becoming Officers.  It would have been interesting to see if they had applied to do so - in the Australian Army Medical doctors and dentists were enlisted as Captains.  They both explained to Lt Bob Collins in later years that they just wanted to learn to be soldiers, however attending annual camp at their rate of pay was a huge reduction in income for both. 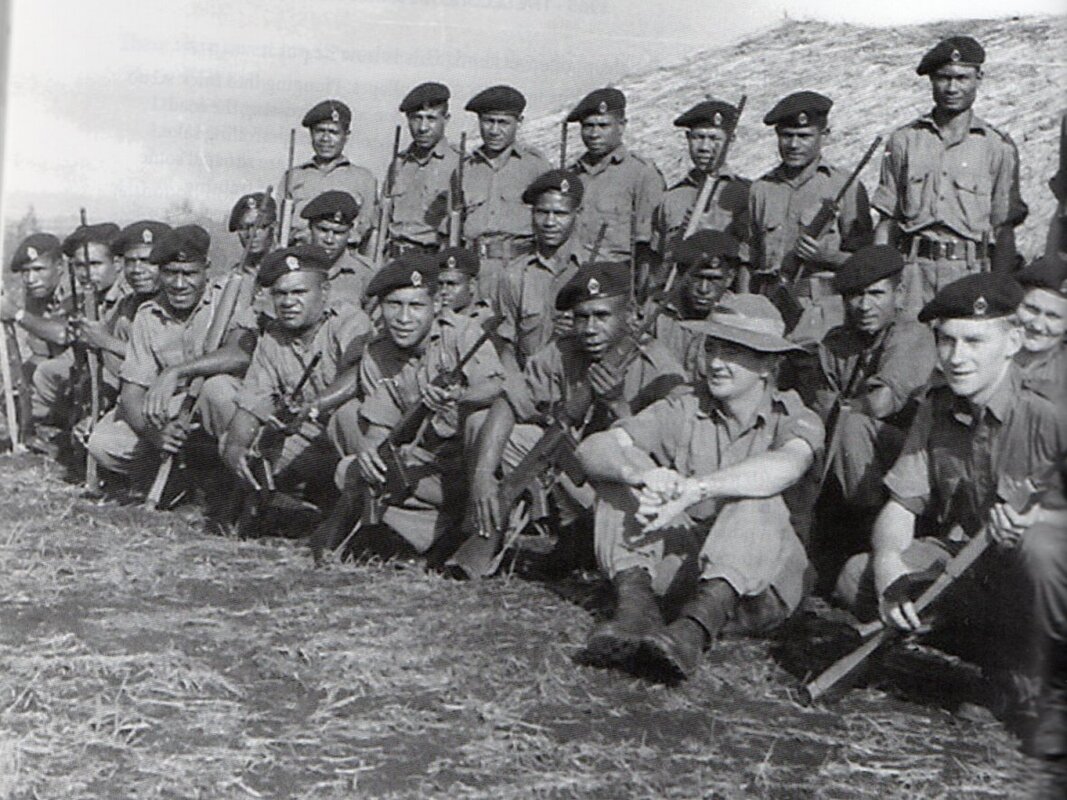 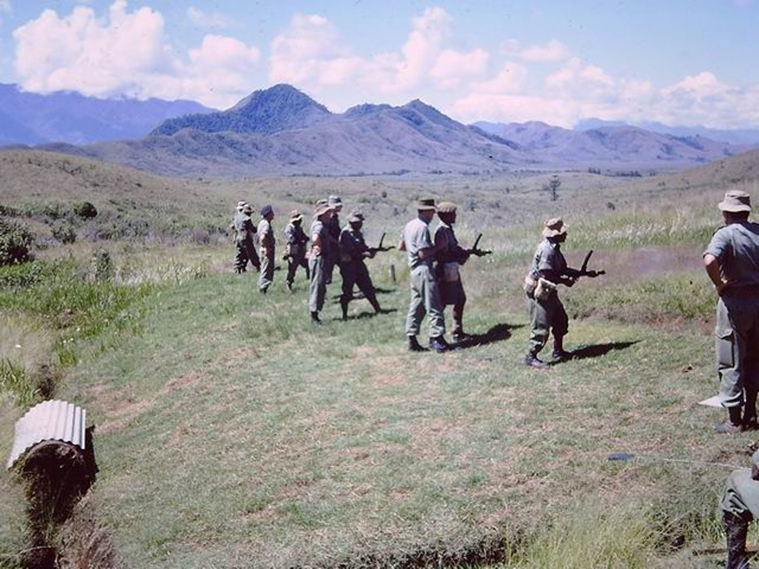 A group firing the SMG on the Mt Ambra Rifle Range 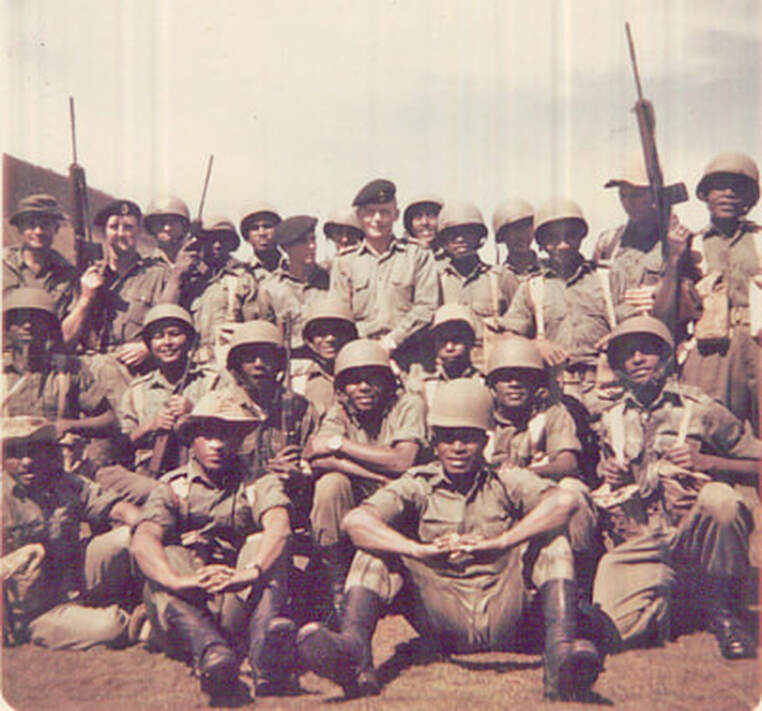 Mt Ambra Camp 1965
​
​1966 - Bumbu River
​
The 1966 annual PNGVR camp was held on the site of an old wartime camp, on the Bumbu River  outside Lae and close to the Finisterre Ranges. Lt Col Bishop announced that the change of venue was due to the need to vary climatic and training conditions.

More than 500 PNGVR troops `marched' into the camp on 24 August. Among the men were recruits from the newly formed University of Papua and New Guinea Platoon at Port Moresby. Nineteen RAAF Cargo flights and some chartered civil aircraft were required to move the soldiers and their equipment to the Bumbu.

Fieldcraft with minor tactics and range shoots with the SLR and 3.5" Rocket Launchers were carried out. Pioneers built a 170 foot suspension bridge over the Bumbu River which not long after the completion of the camp was washed away in a flash flood. Brigadier I.M. Hunter who had  arrived in PNG earlier in the year and the Honorary Colonel, Captain R. R. Cole visited the troop during their field exercises.  A three day counter insurgency exercise involving the Battalion was carried out.

The following is from “PNGVR A History 1951-1975”
“Bob Collins had a different view of the Butibum camp than the CO had. Lt Colonel Bishop had announced that the change of venue for the camp was due to the need to vary climatic and training conditions. Here is what Collins, who had a large number of supporters, had to say on the matter: "The camp at the Butibum in 1966 was a very miserable affair. I have never figured out just who decided to have a camp in Lae during the wet season, but needless to say it was raining when I first got there for the advance party and it was still raining when I left after staying on with the rear party: It had hardly stopped once during the two weeks of the camp. “ 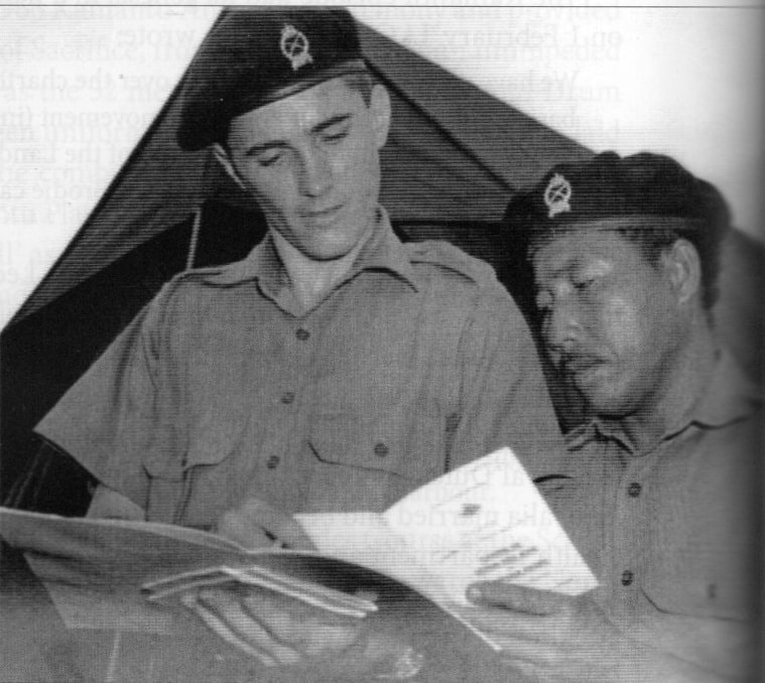 ​Pte Michael White and L/Cpl Muck Sing check roll books with the orderly room.
1967 - Lae (showgrounds)
​
The 1967 camp was again held at Lae. This time the 450 men taking part used the Lae Showground as their base and spent most of the time in the field.

Being in the field for the majority of the battalion meant being moved by road to the Bulolo Valley and then reversing direction and heading back on foot with the Wau-Lae road as the axis of advance towards Lae in a series of counter-insurgency exercises with an oversize PIR Rifle Platoon as the `enemy'. The enemy were in their element, in the trees, in the river beds, in the kunai and other places, all of a sudden, hitting a target and running.

This six day exercise was perhaps the most physically strenuous and time consuming the unit as a whole had undertaken.

Each soldier carried everything he needed on his back and around  his body in basic pouches, including weapon, blank ammunition, sleeping gear, water and rations. Each day, around 1600 hours, the rifle companies moved laterally on a compass bearing at least 2-300m from the axis of advance and went into a harbour, an excellent method of all-round defence and after `stand to' was put in place, sent out clearing patrols to ensure the enemy was not in the immediate area.

Again at first light the next morning clearing patrols were sent out whilst the sub-units were at 'stand to', before the companies began moving back on the axis of advance for the new day. Some ambushes set by the enemy were sprung by PNGVR and immediate action drills put into place by the rifle sections or platoon concerned.

​Prior to the conclusion of the camp, for the first time in its history, PNGVR marched as a Battalion in public through the streets of Lae, the CO having been ‘symbolically’ given the keys to the town. 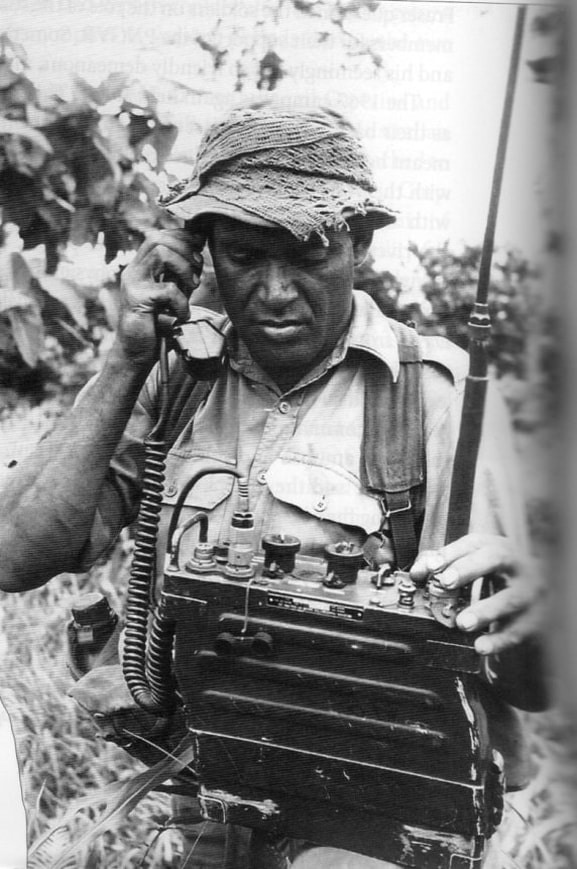 ​Setting up communications from the Lae Rifle Range to the Lae Showgrounds. 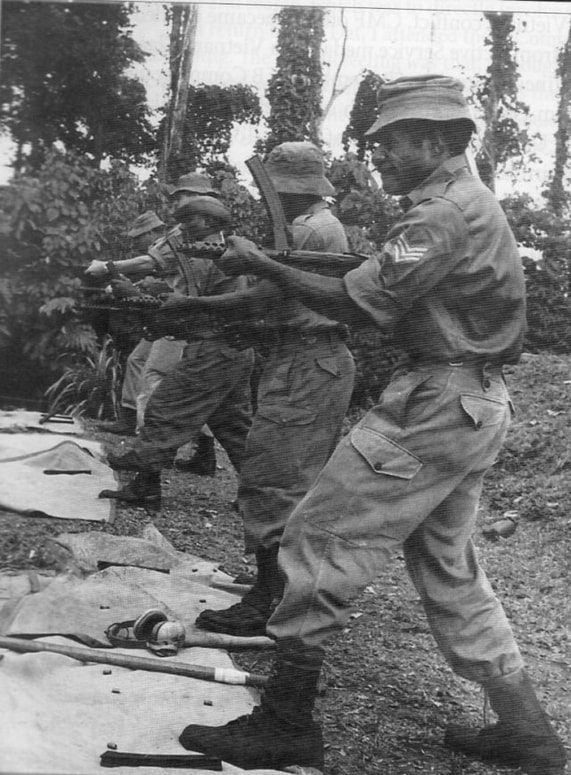 ​  SMG firing on the A Coy Lae rifle range. The weapon is the SMG F1, the replacement for the Owen gun. While it was still 9 mm caliber, it was reputedly never as good and didn't stay in service for very long. 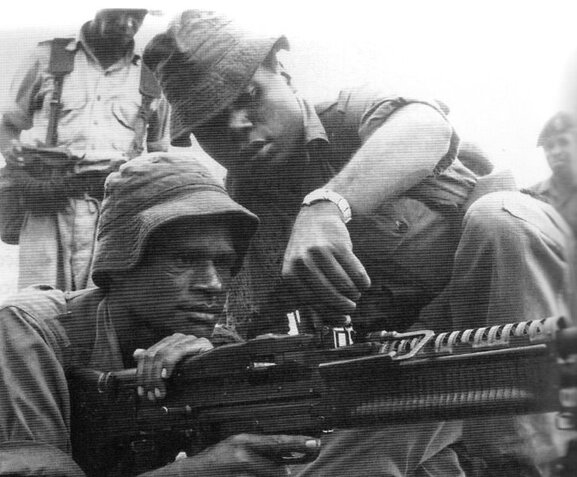 ​  GPMG training by A Coy members at the Lae Showground. 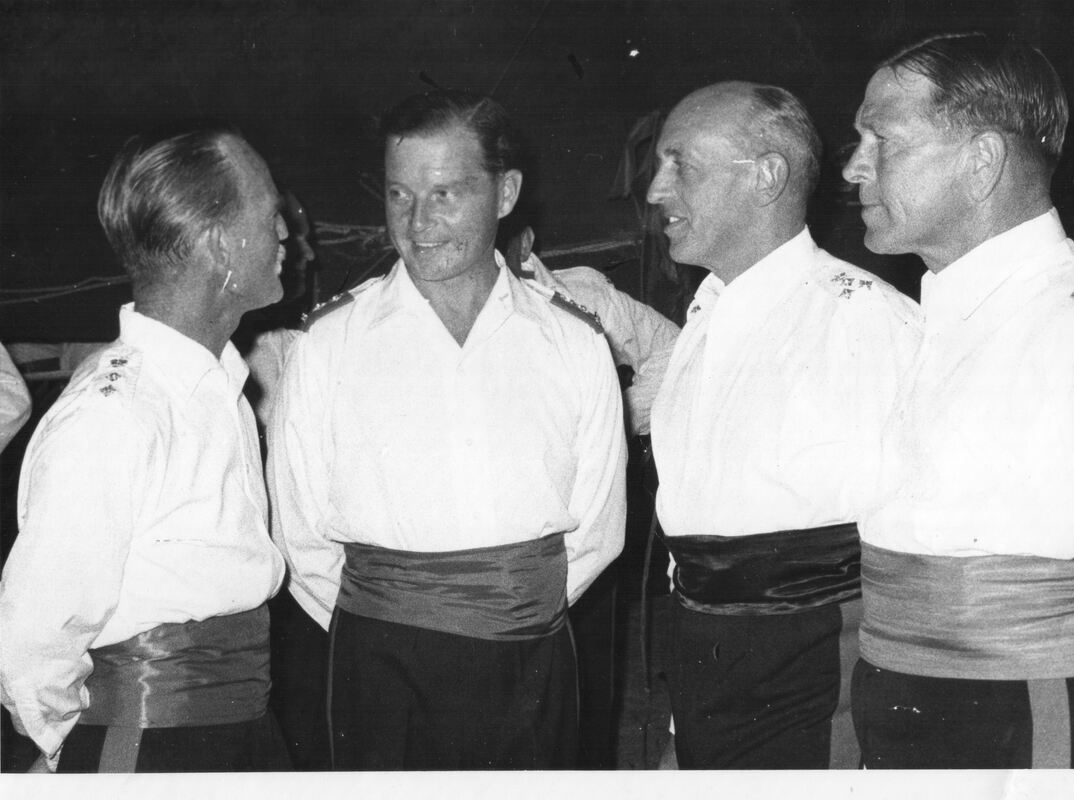 In the mess ante room at the 1967 camp officers dining in night.
​
1968 - Igam Barracks
​
Annual camp was, for the first time, based on Igam Barracks, which was officially opened by the Minister for the Army, Phillip lynch, in Sep 1968. The major exercise on the camp ‘Red Hand’ was a battalion exercise with the aim to carry out the occupation of a battalion hasty defensive position and test deployment procedures at Company and Platoon level.  Duration of the exercise was 1600 hrs 29 Aug to 1200 hrs  5 Sep.

The terrain on which ‘Red Hand’ was carried out was rough and difficult and there was always a danger of personnel being lost. Some of the safety measures were:-
i) All creeks eventually lead to the Busu or Butibum rivers.
ii) If unable to move light a fire, preferably in a clearing.
(iii) If able to move go to the nearest creek, follow to a clearing, sit down and wait; light a fire if possible.

One C Coy indigenous soldier had a night to remember when, on the one night on two separate occasions, a python slithered into his weapon pit.  Both snakes were dispatched, leaving behind one extremely upset soldier.

​A sports day was held on 6th Sept and that evening, the ORs held a BBQ and both Officers and Sgts held a dining nights at Igam Barracks.

​1969 - Igam Barracks
​
Again held at Igam Barracks from 10-25 May.  Attendance was 361.  Personnel were flown in from their centres by Hercules and Caribou aircraft.

​The first week was devoted to preparation for the presentation of the Colours and the second week included a 4 day exercise in the Atzerra Ranges.

Presentation of the Colours is fully covered in the web site “About”  “Queen and Regimental colours”.

PNGVR on parade for the Presentation of the Colours. 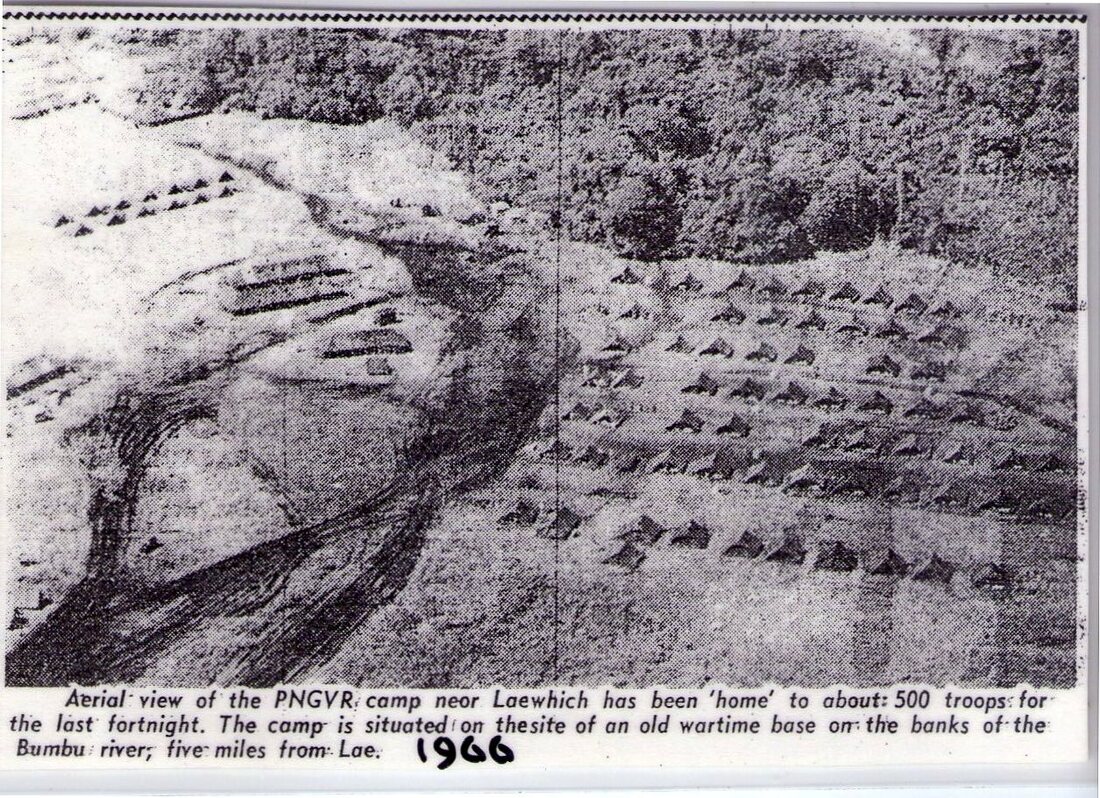