On Saturday, 18 October our AGM was held at Wacol in the former Cadets building followed by a Barbecue luncheon. It was another successful event.

The old committee was thanked and replaced by more of the same. The only exception was our long standing committee man Jesse Chee who decided not to stand in 2014/15 , and I thank him for his long contribution to the Association. Jesse has made himself available if needed. In his place Kieran Nelson , our face book master was elected.

Our Patron and President of NSAAQ were present . Also present was Peter Dunn , the onsite Manager for Metroplex ,the landlord for NSAAQ and developer of the contiguous industrial land who was invited to brief us about the current situation of the site and how the future development will effect NSAAQ and NGVR/PNGVR. Peter Dunn explained that Metroplex was now in partnership with another major company and intended developing the site in stages, the first being south of Boundary Road which Road is currently being built into a four lane road through to the creek and which is expected to be completed by the of December 2014. Peter said Metroplex is discussing with the Brisbane City Council the possibility of the Military Heritage Precinct becoming a Park. The NSAAQ and our Association have a clear interest in this proposal and both will be ensuring that discussions are undertaken while both are present. Handing the site over to BCC has distinct advantages for the developer but not necessarily for either NSAAQ or NGVR/PNGVR. Some of the issues are title, public access and security. You will be kept informed of progress.

The Minutes of the AGM will better cover proceedings than I can . One pleasant agenda item was to ask our Patron to make his annual presentation of the Patron’s award . This year the former Vice President of the Association, John Mudge and founding member and committee member Norm Mundy were received into this prominent list of awardees. John who was unable to attend the AGM greatly assisted the Association in the earlier days when he was one of the few members living in PNG . Without John’s knowledge and experience with the PNG Government at that time it is unlikely the Association members would have received their service medals due to them. Norm with Harry and Joe were the founders of the Association but without Norm’s initial input the rest probably would not have occurred.

The refurbishment and general maintenance of the Museum Building is an ongoing project. The end wall at the road end has had the windows removed, the wall res h e e t e d i n weather board and painted. The veranda floor have been resealed and the wall has been repainted. Exhibits are regularly changed and or being brought up to date. Much of this work was completed prior to our 6 September Anzac Commemoration/Dedication Service . The construction of an extension to the Museum is a priority project to enable the presentation of our exhibits in a safe and comfortable environment to our members and community visitors. It is intended to extend the existing premises about 10 m to the entry end of the building. It would be in similar materials and the access and services from the existing building, including the ramp will be utilised to save money. A submission was made in August to Round 82 of the State Government’s Gambling Community Benefit Fund for $35,000 but the result will not be known until late December or January 2015. Accordingly, in order to save time between rounds and under advice of the CEO of that office, our submission will be resubmitted for Round 83 by 30 November 2014 in case we are unsuccessful. If we are successful in Round 82 , the second application will be withdrawn. About $8,000 was raised for this purpose through the AirNiugini Raffle and other funds are available to assist to complete the project should our major application for funding be successful. Plans have been drawn up, NSAAQ approval received to construct on site and quotes received. When a start is made we would expect completion of the project within 6 months.

Our Association has been presenting awards for excellence to the top performing section in 9 RQR for many years. 2014 awards were made 31 August and the engraved medallions were forwarded to 9 RQR recently to ensure the return of these much competed for awards are in the hands of the recipients before the end of the year. 9 RQR is being presented with new Colours at 08.30 hours on Saturday 6 December 2014 in the Roma Street Parklands Celebrations Precinct followed by a luncheon at Enoggera Barracks and an invitation has been extended to members and friends to attend this colourful ceremony in Brisbane. Please view www.9bnassoc.org for full details. If you are attending, the dress is PNGVR Anzac Day Dress with full medals. 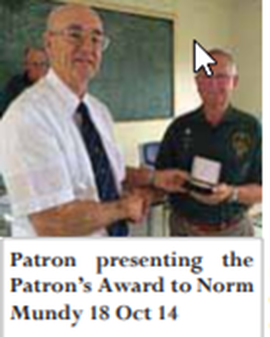