​This Association was invited to attend with banner, flags etc., to the FUNERAL SERVICE &. ENTOMBMENT OF THE UNKNOWN AUSTRALIAN SOLIDER AUSTRALIAN WAR MEMORIAL, CANBERRA A.C.T. 11TH NOVEMBER 1993. Standard bearers being W.O.I. Joe Fisk, R.F.M., E.M. and W.O.I. Norm Mundy R.F.M. through the excellent arrangements made by Major Peter Rogers DFC. with his former command, the School of Army Aviation, Oakey.

Pilots from the School of Army Aviation were both from Papua New Guinea, Lt. Hans Bock of Dorogiri Village, Daru and student pilot Kit Collins from Air Transport Squadron, Hohola and whose parents are teachers at Misima High School, M.B.P. The flying and food was excellent both ways, and also on board there was the PNG flag from PNG Consul, Tom Polumae, Brisbane along with regimental banner, battalion flag and Australian flag. The contingent visited Old Parliament House where the catafalque was on view before the ceremony on the 11th.

The following day on the 11th, we assembled in our allotted space before the War Memorial, and were joined in that area by Major Tom Milan, W.O.II Bruce Inch, Capt. Mike Griffin, Capt. Jess Hansford. It was also good to see our much decorated ex-adjutant Barry Sullivan, Ken Bagot, and Charlie Schuster and of course Charles Nelson and his son, Neil who was in uniform, and on leave from University.

There were over 300 sets of banners and units lining the route, and although we were not permitted to march behind our standard bearers due to lack of space, we did unfurl our flags and after the coffin and escort passed, went in orderly fashion, as near as possible to the assembly of banners to witness and listen to the rest of the ceremony.

This historic occasion with all its banners, assembly of associations and the official parties was historic and wonderful. It is certain that such a sight will not be witnessed in Australia again. Due praise must go to the parties from Navy, Army and Air Force whose turnout was without criticism. The mounted parties depicting the Light Horse and 1914 AIF Navy etc., from W.W.I. were admirable.
​
In the evening the viewing of the actual Tomb of the Unknown Soldier was reverently examined in the War Memorial. The dignity of the whole proceeding will never be forgotten to anyone who has been in the military or associated with it. For those of us who were fortunate enough to attend I sincerely believe that nothing can surpass the honour of being there.


See "Harim Tok Tok" Volume 1, March 1994, for letters of thanks written to the C.O. School of Army Aviation, Oakey, Major Peter Rogers DFC for the provision of transport to and from Canberra, and an excellent letter titled "I was There" written by Kel Williams for publication in the Gaythorne RSL Club Newsletter. 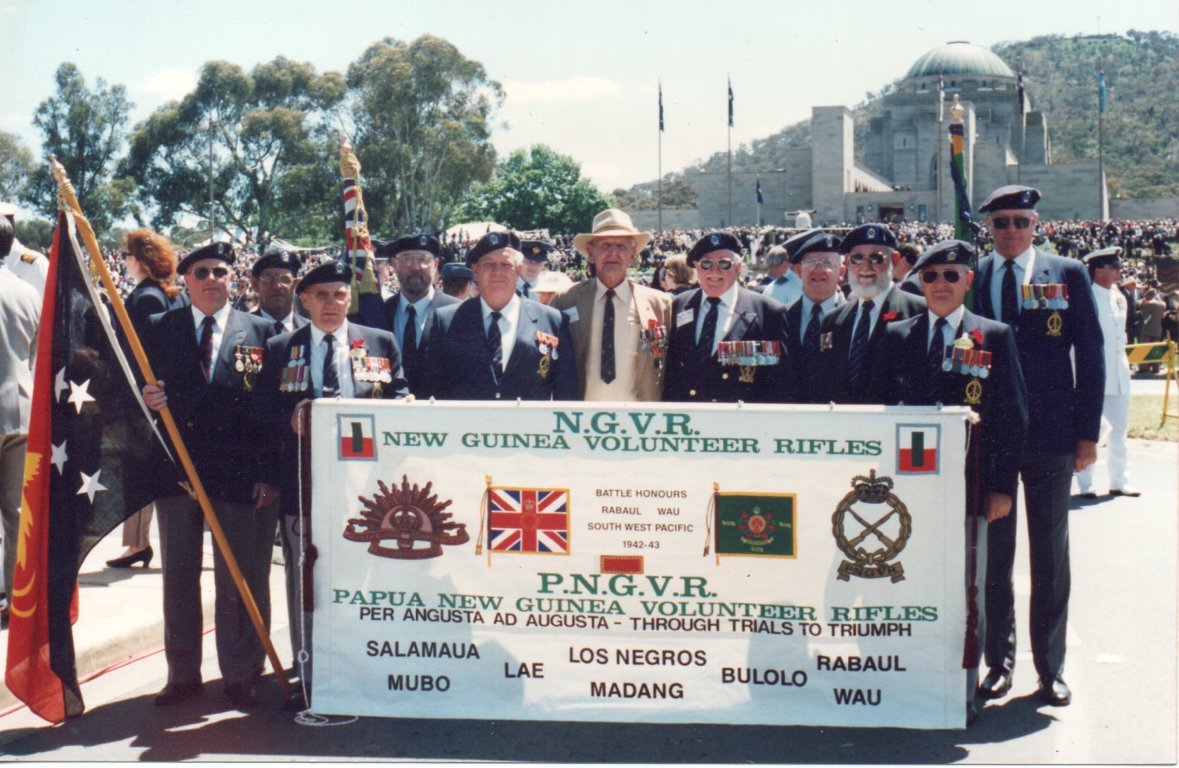 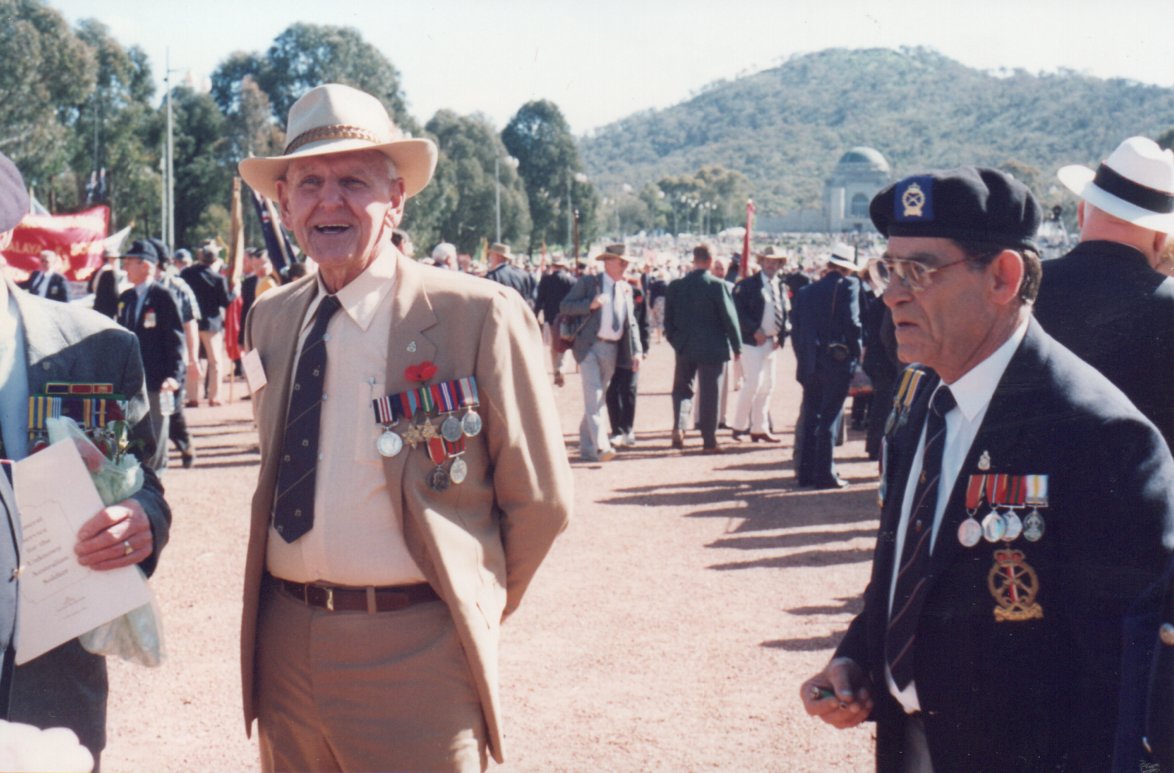 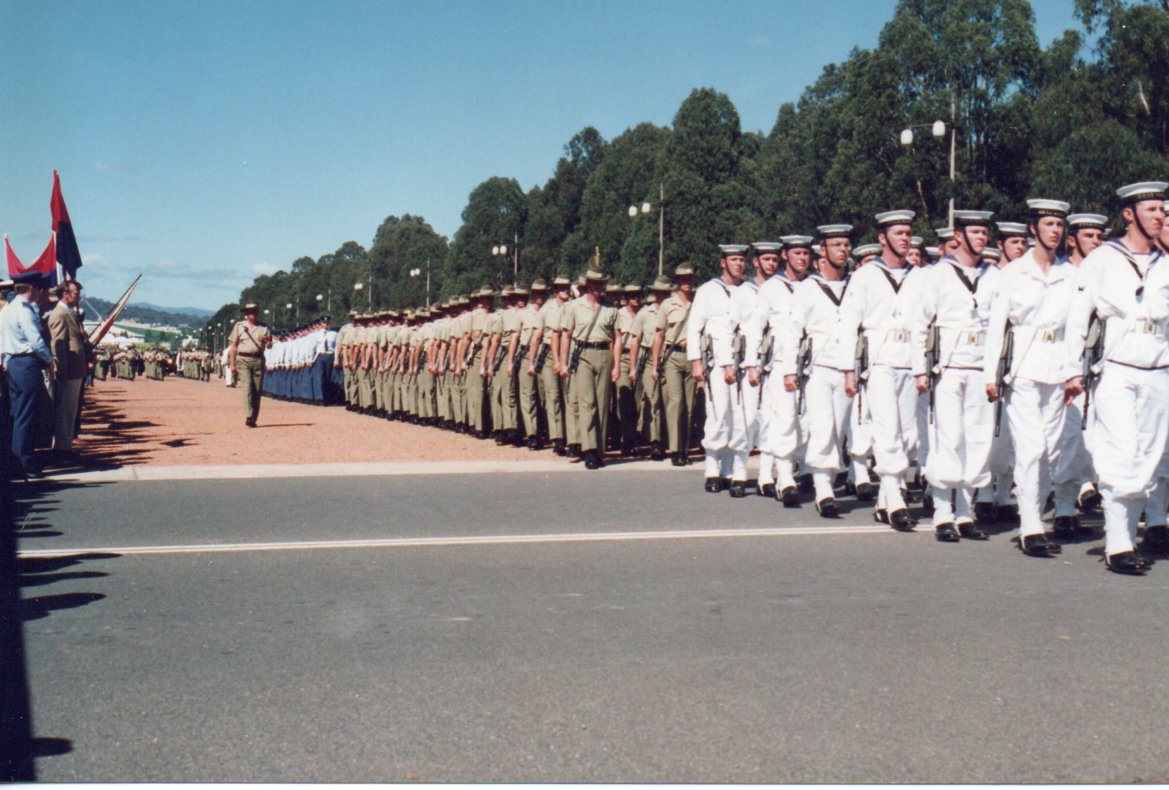 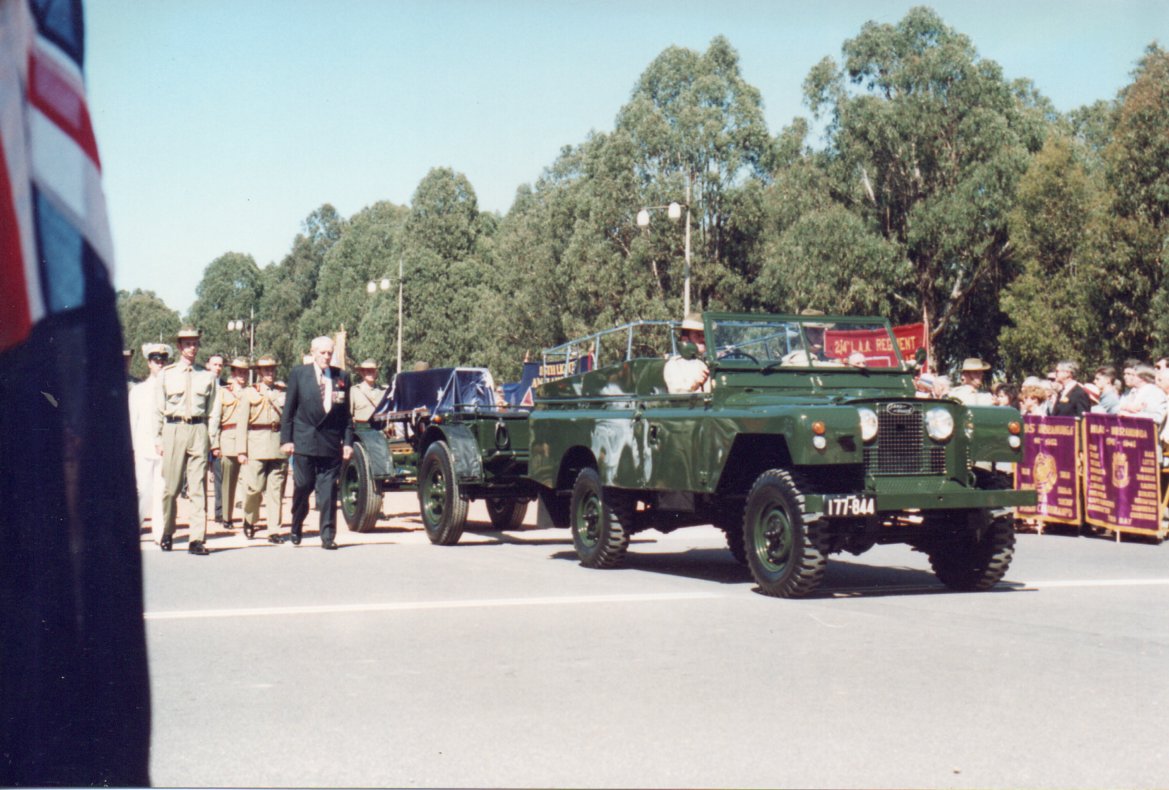 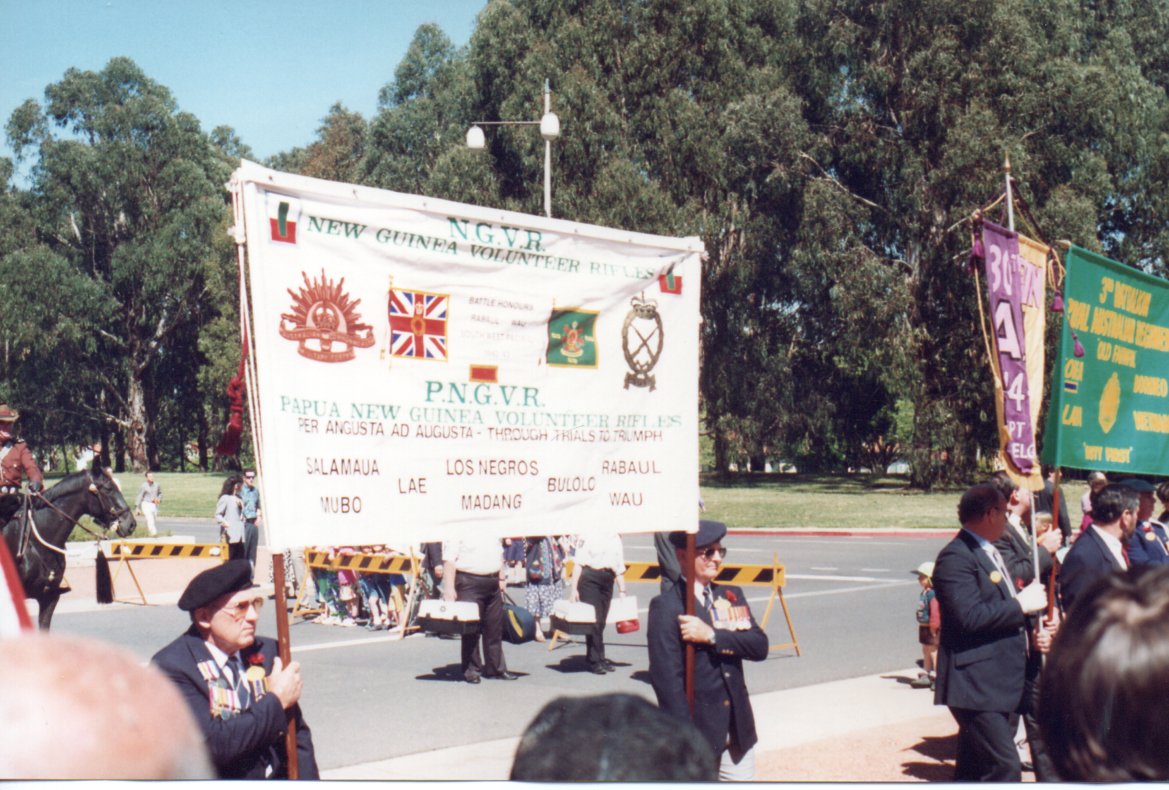 The Association Banner carried by Joe Fisk and Norm Mundy 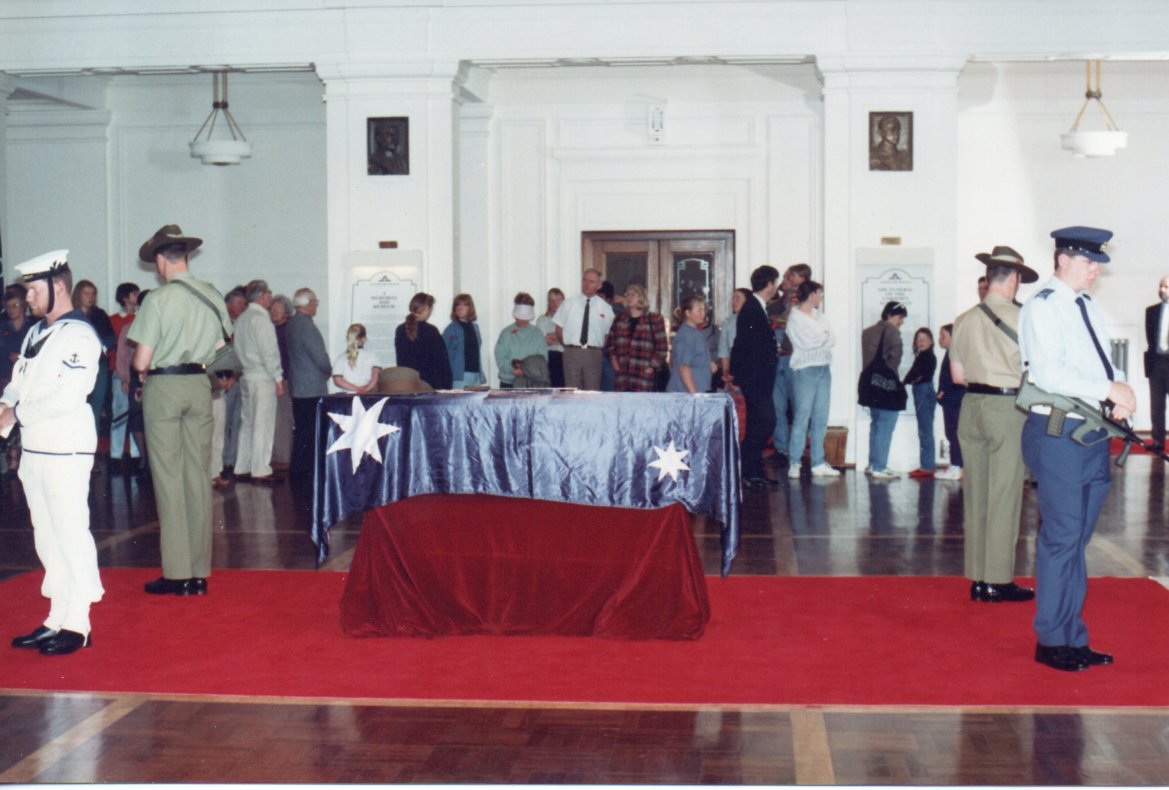 Inside the War Memorial 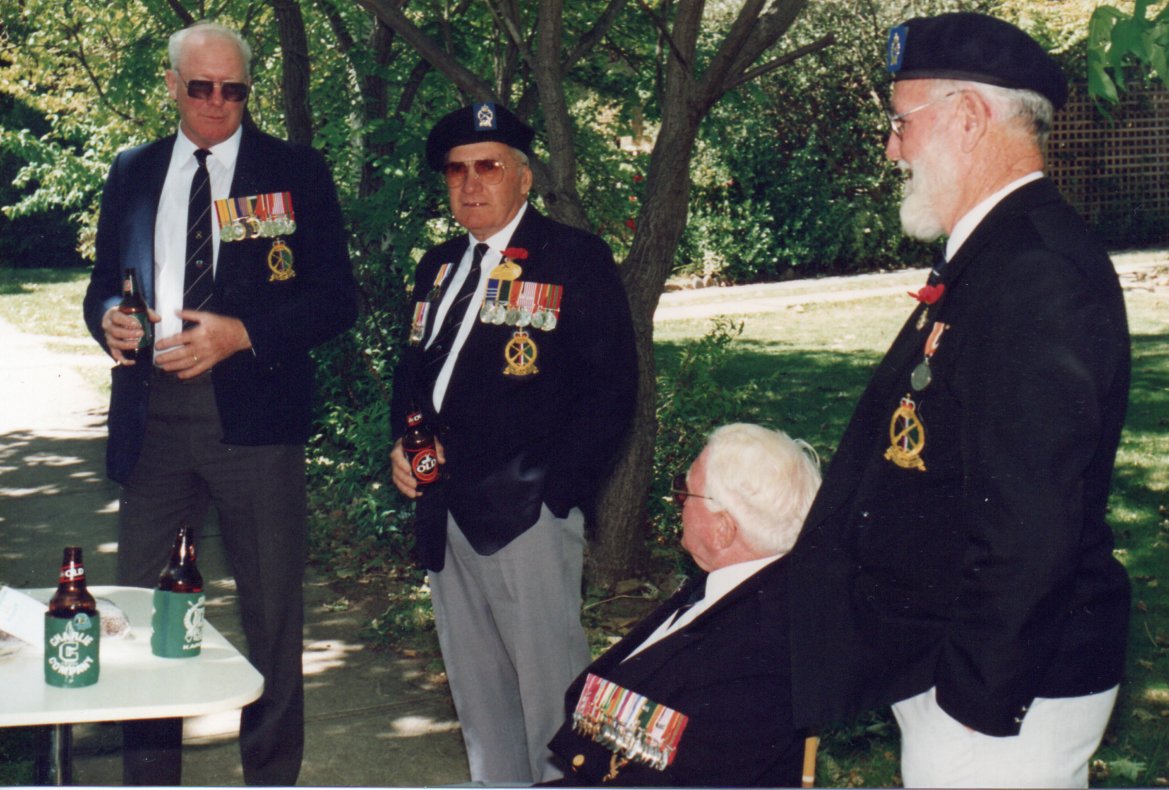 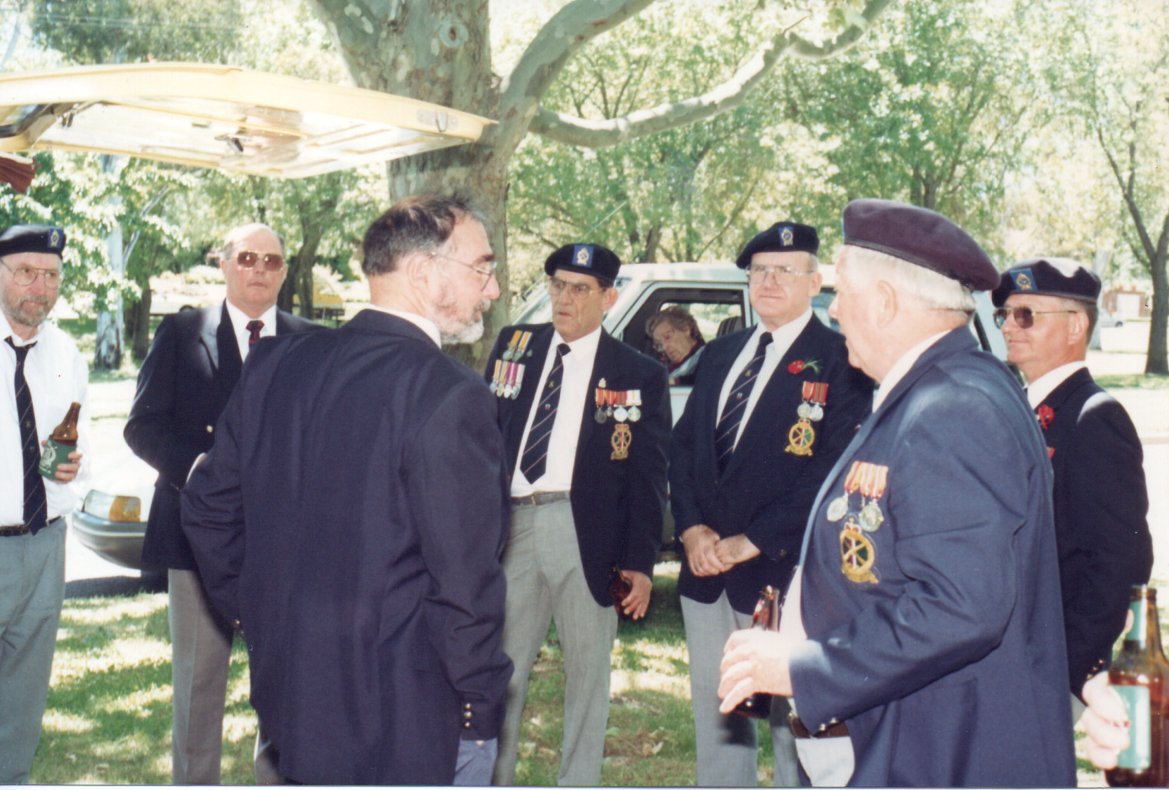 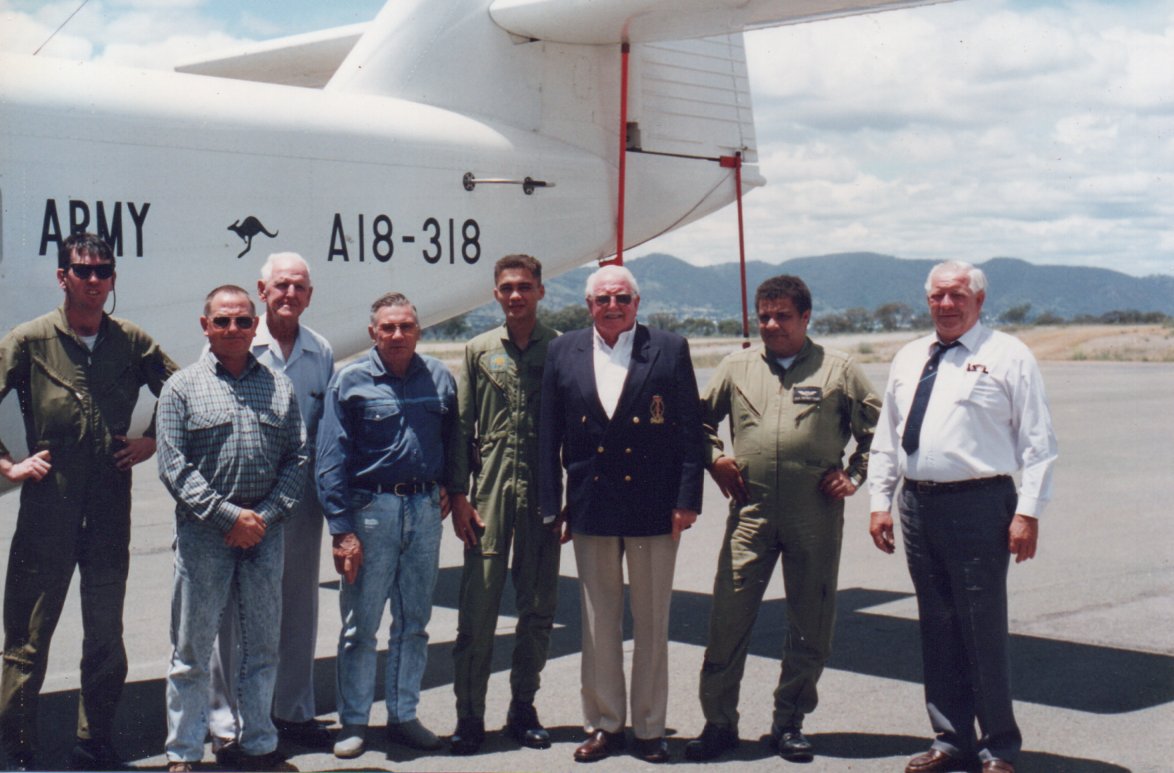