A DINING NIGHT WITH A DIFFERENCE
By Bob Collins
On Saturday 27th November 1999, 34 members of the Association and their partners attended an informal Dining Night under a marquee at Jimboomba. Mind you it was no ordinary dinner under a marquee. The Association Flags, dining bell, sword, chromed .303 rifle and bayonet were all on display at the head table together with candelabra.
Because the Long Tan Sergeants Mess at Gallipoli Barracks could not cope with a formal dining night due to Army commitments to East Timor, and with the Officers Mess at Victoria Barracks being booked up, it was decided that this would be no barrier to a final dining night for the year.

Thanks to Committee member Barry Wright and his gracious wife Pam, a suitable flat paddock was donated for the occasion. Committee members Barry Wright, Joe Fisk, Jesse Chee, Bob Collins and Norm Mundy put in a number of working days at Barry’s, and with the supplier of Bamboo, John Holland, the scene was slowly being set.
And what a scene it was to behold:-
* A Dining marquee
* Pre-dinner drinks annex to accommodate 40 persons
* Kitchen for the caterers
* Huge Bar-B-Q fire for those who were there for lunch on the Saturday and breakfast on the Sunday
* Overnight tents (a few bought their own haus on wheels )
* Shower
* Toilet complex
* A bon fire ( not used due to the wind later in the evening)
* loads of parking plus a generator for pre-dinner lighting and kitchen use.

Unfortunately our President Colonel Green was unable to attend the function and his place was filled by yours truly. I must confess I had a lot of fun with the Mess bell. Hank and Berry Cosgrove from the Aust- PNG Cultural and Business Society were our official guests. Our official photographer, Tom Dowling ( affectionately nicknamed “Flasher" or “Snappy Tom”) was Mr Vice for the evening, and, after the meal, entertained members with his witty comments.

Outside caterers were used for the three course meal and quality, quantity and variety were all in abundance. For those ladies who did not attend, you missed the chance of a lifetime, as during the meal, members waiting on their ladies. True!

The tables were laid with white table cloths, silver candle holders and candelabra and flowers. Val Fisk provided a gardenia spray for the ladies.
The meal was conducted by candlelight, and those members with Association polo shirts wore same to help create a superb setting. The usual dining formalities and toasts were observed. The weather was kind and overall it was an enjoyable evening.

Whilst a number of members worked hard leading up to and after the function, our special thanks go to Barry and Pam Wright for providing the venue, and to Barry for all the hard work he put in to make the function a success.
​


For the first dinner everything except the tablecloths was hired.  Over the next 10 years any profits from the dinners went into purchasing crockery, glasses, tentage, etc., and in improvements to the area – kitchen, shower, toilets etc., until everything was owned.

From 2002 the State Emergency Services were most helpful in the early days and loaned tentage, chairs etc.  With the purchase of, and recovering of our own chairs, after about 2010, nothing was then required from SES.   ​ 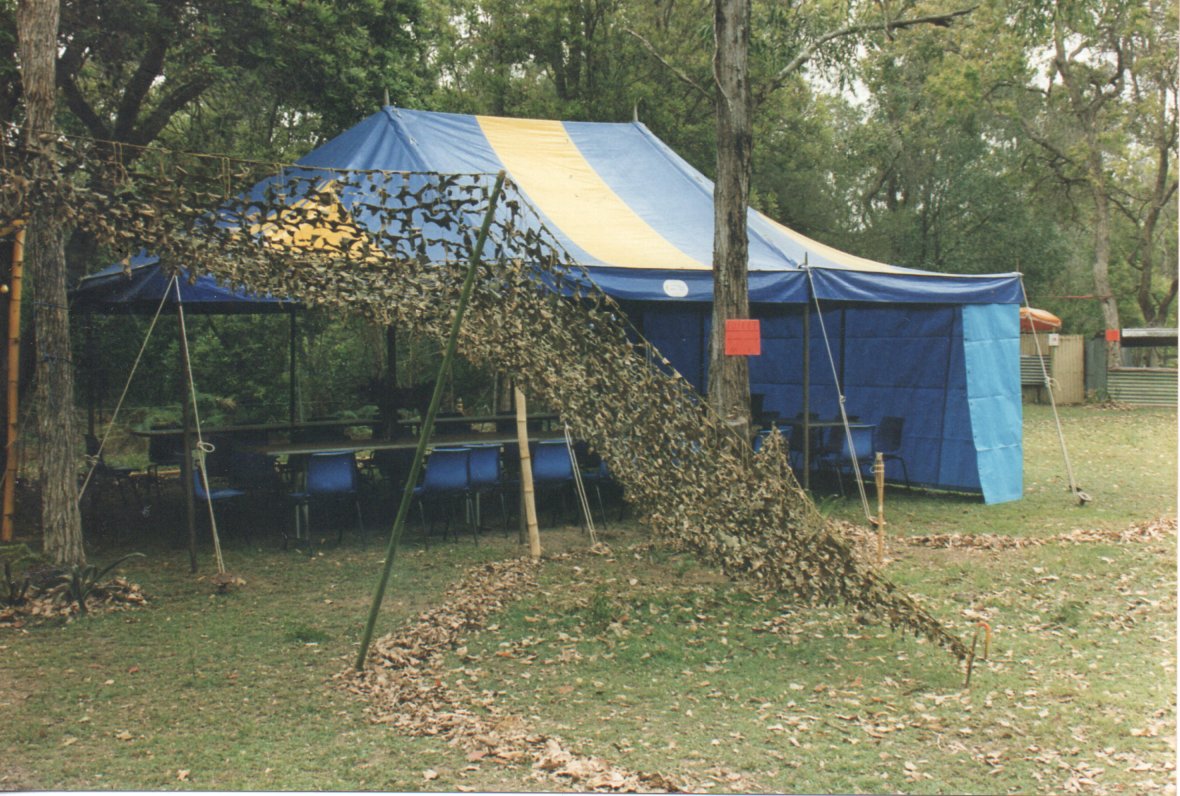 The hired Marquee and Chairs for the first Bush Dinner.   The camouflage net was set up as an entrance to the Ante Room. 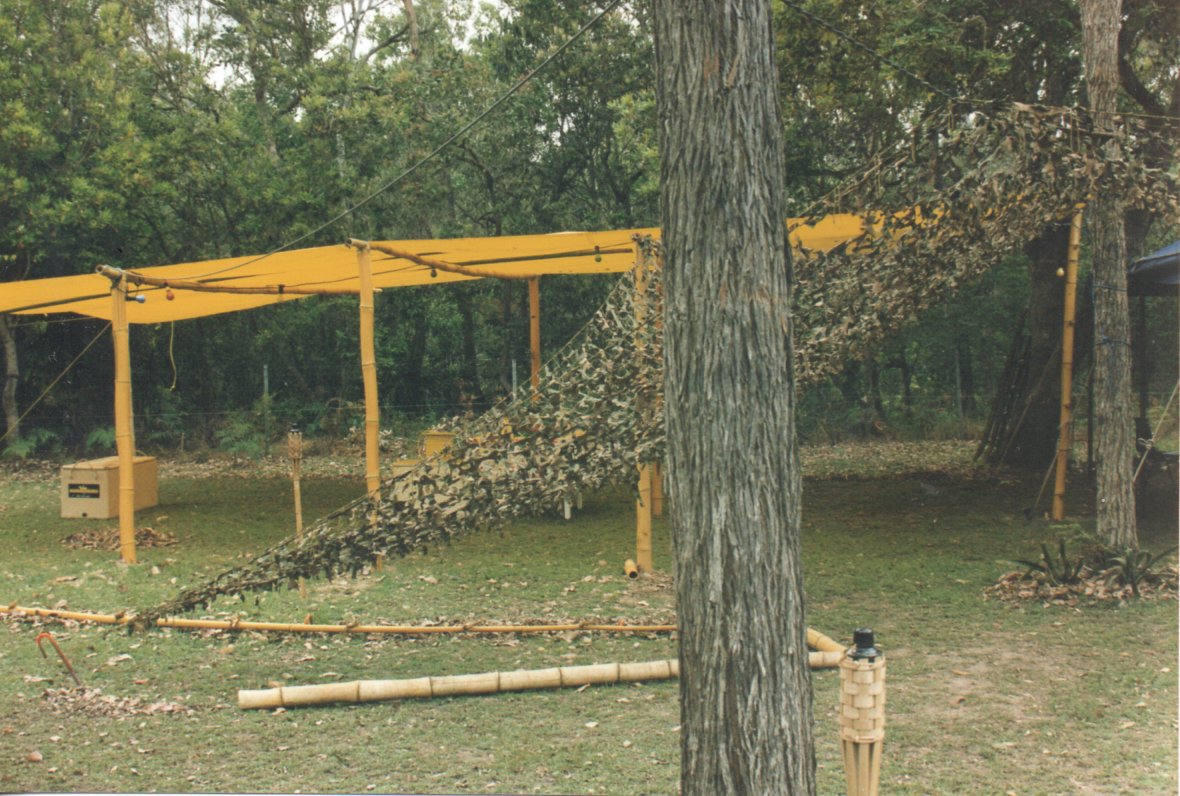 The Ante Room prior to having a cover placed over it. 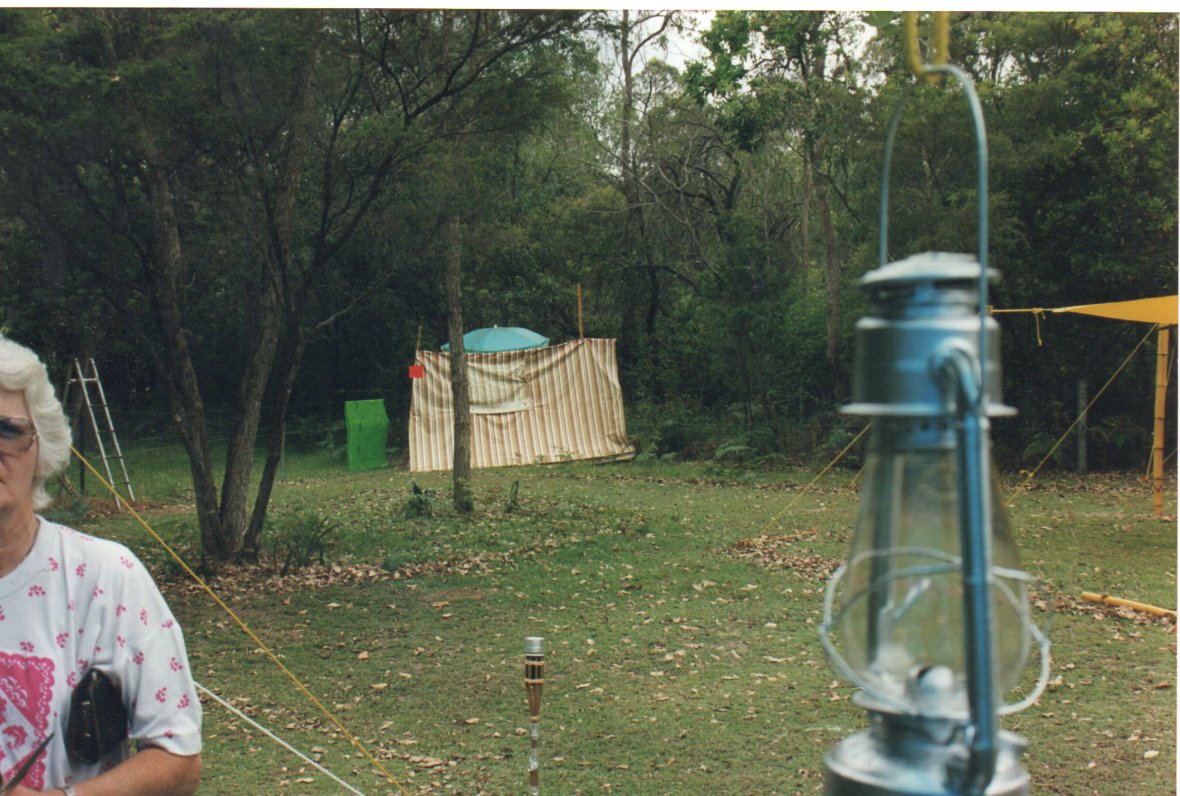 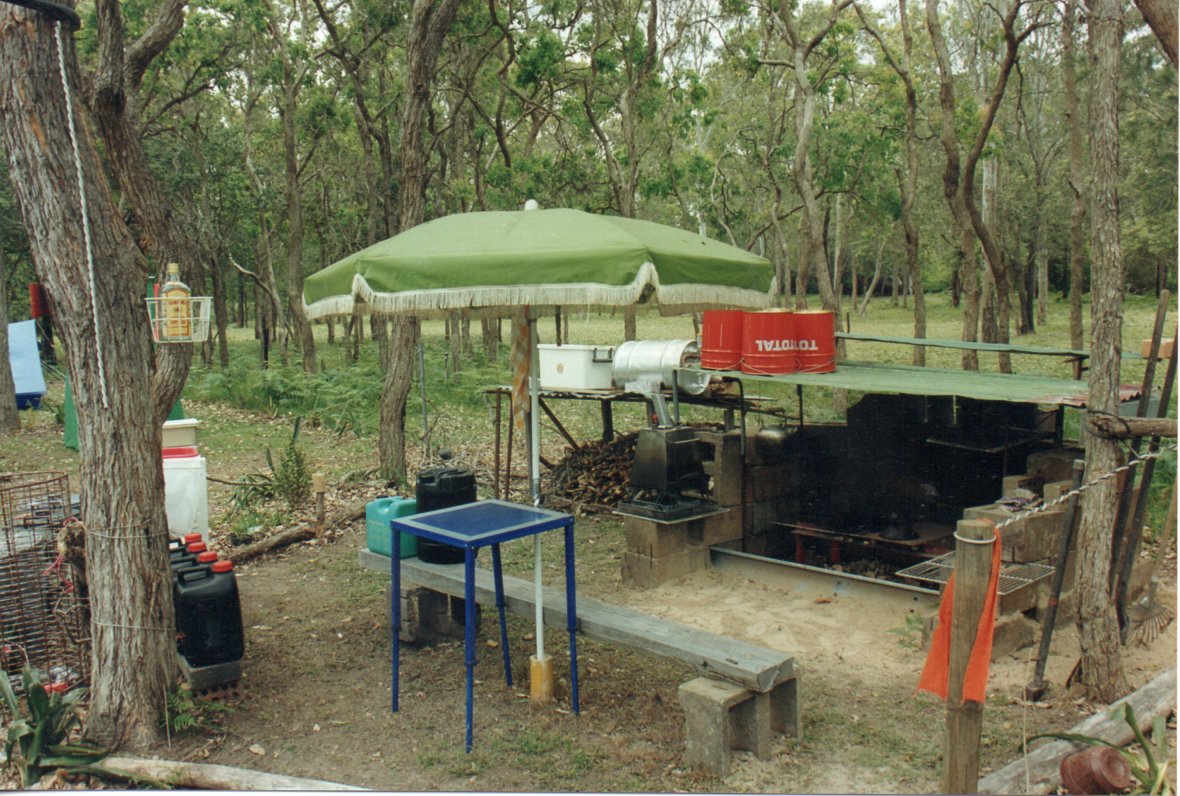 The original kitchen.   Another permanent kitchen was constructed in laer years. 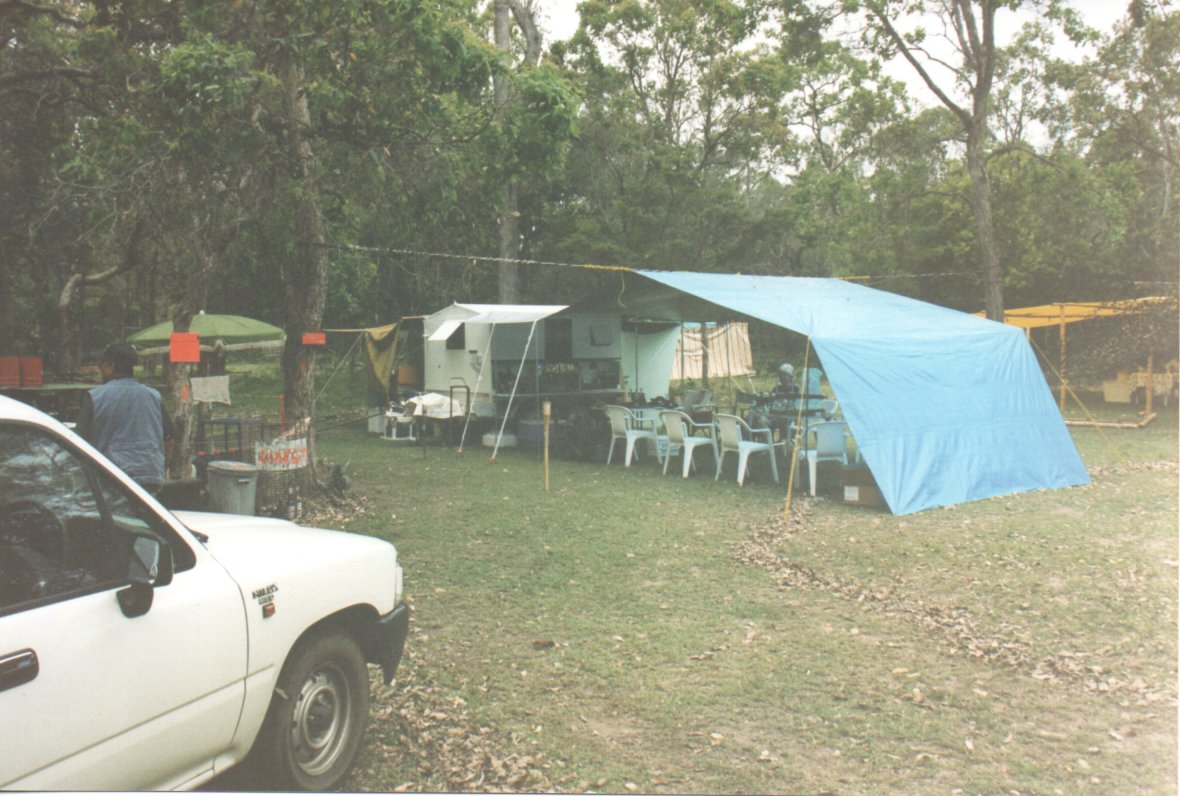 The dining and recreation area for those involved in the setting up and dismantling of the area. 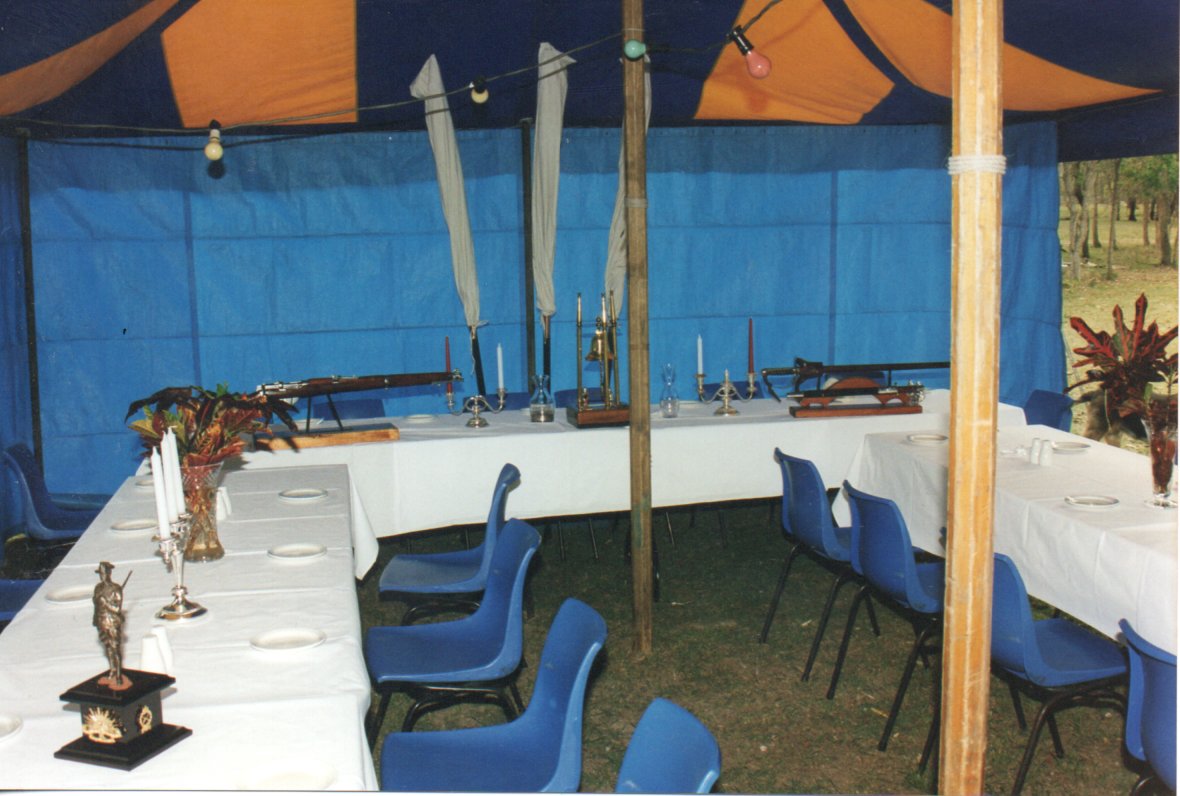 Getting the dining area ready.   The only wall was at the Head Table so that the Flags would not be blown about.
The lights were powered by a generator.  It was standard that, about 3/4 of the way through the proceedings, the generator would run out of fuel.
At the first flicker of the lights, Barry Wright, Joe Fisk, Norm Mundy and Bob Collins would race outside to a specially built bunker built to cover the noise of the generator and proceed to refuel.  Much hilarity inside the marquee whilst this was going on. 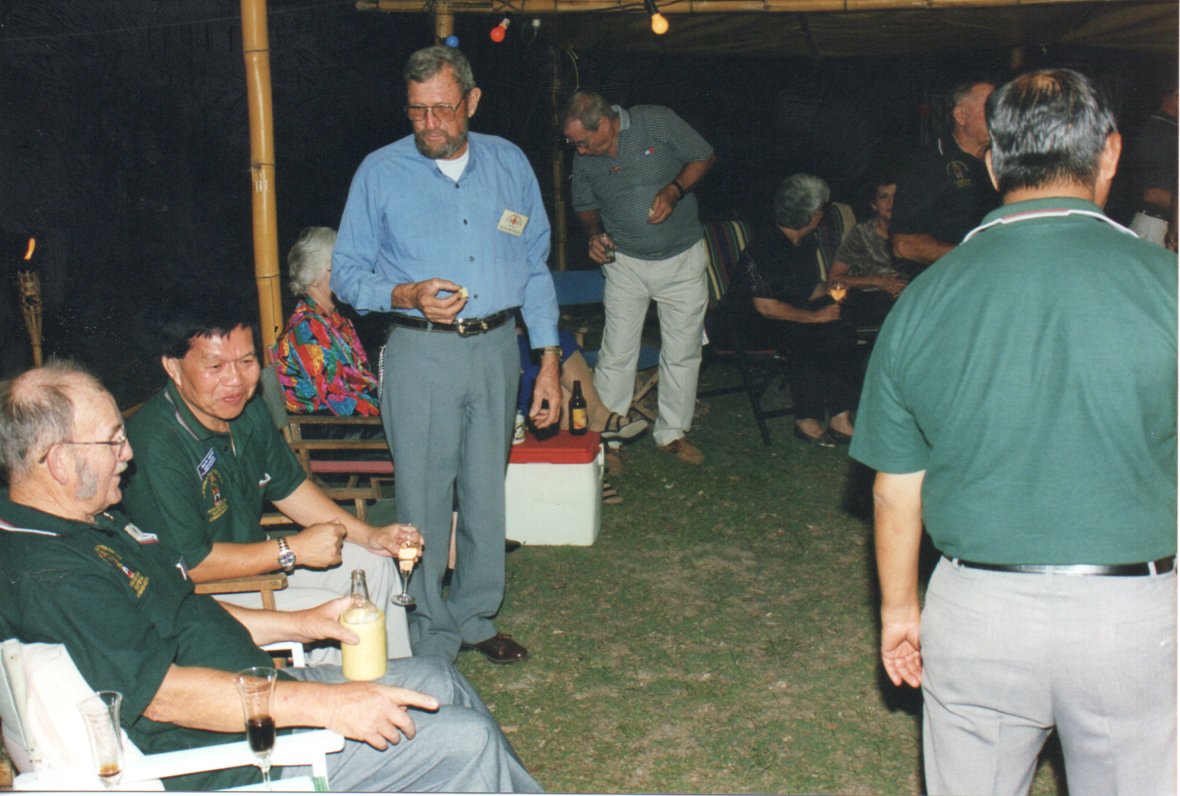 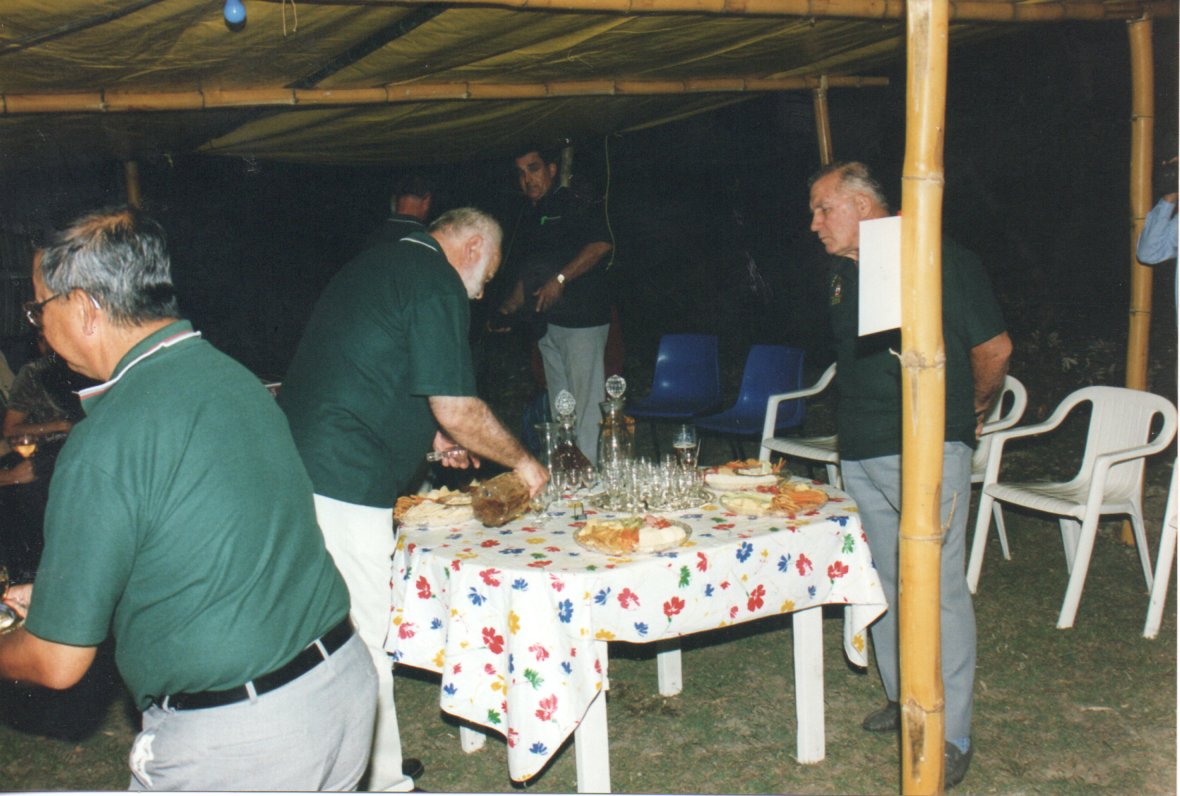 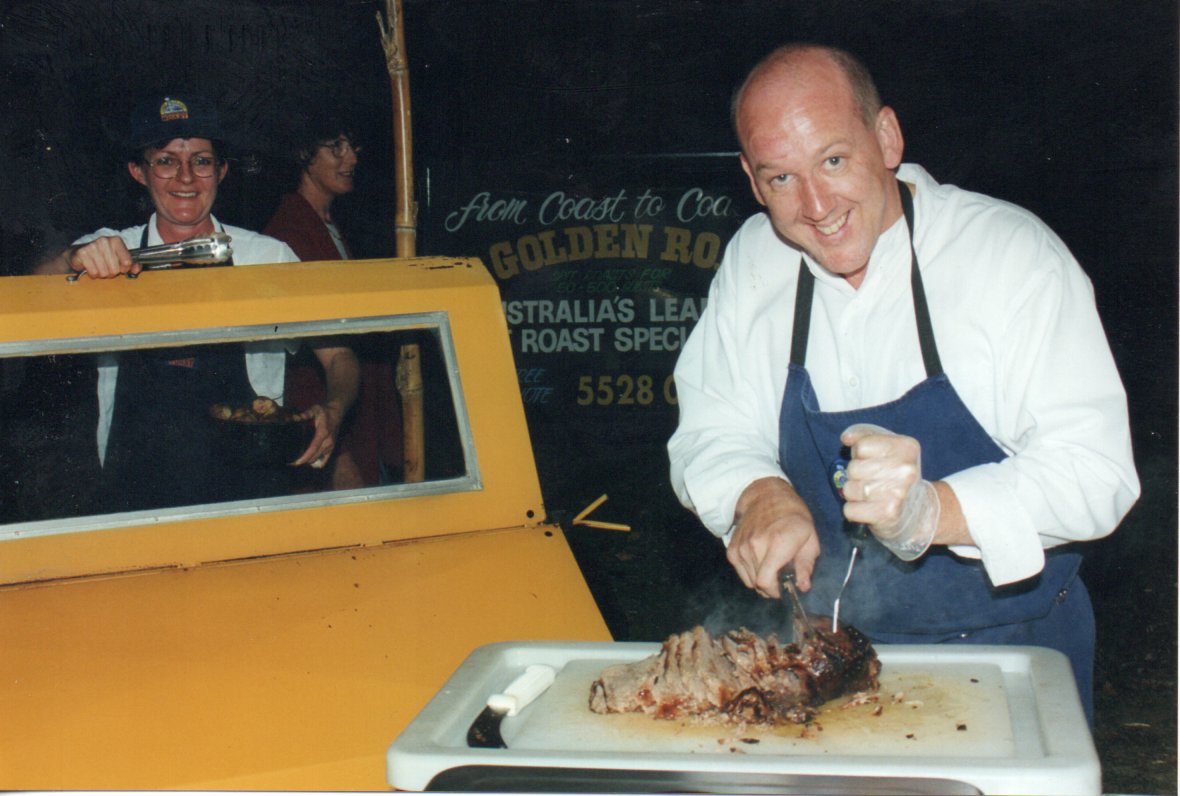 The cooks readying the meal. 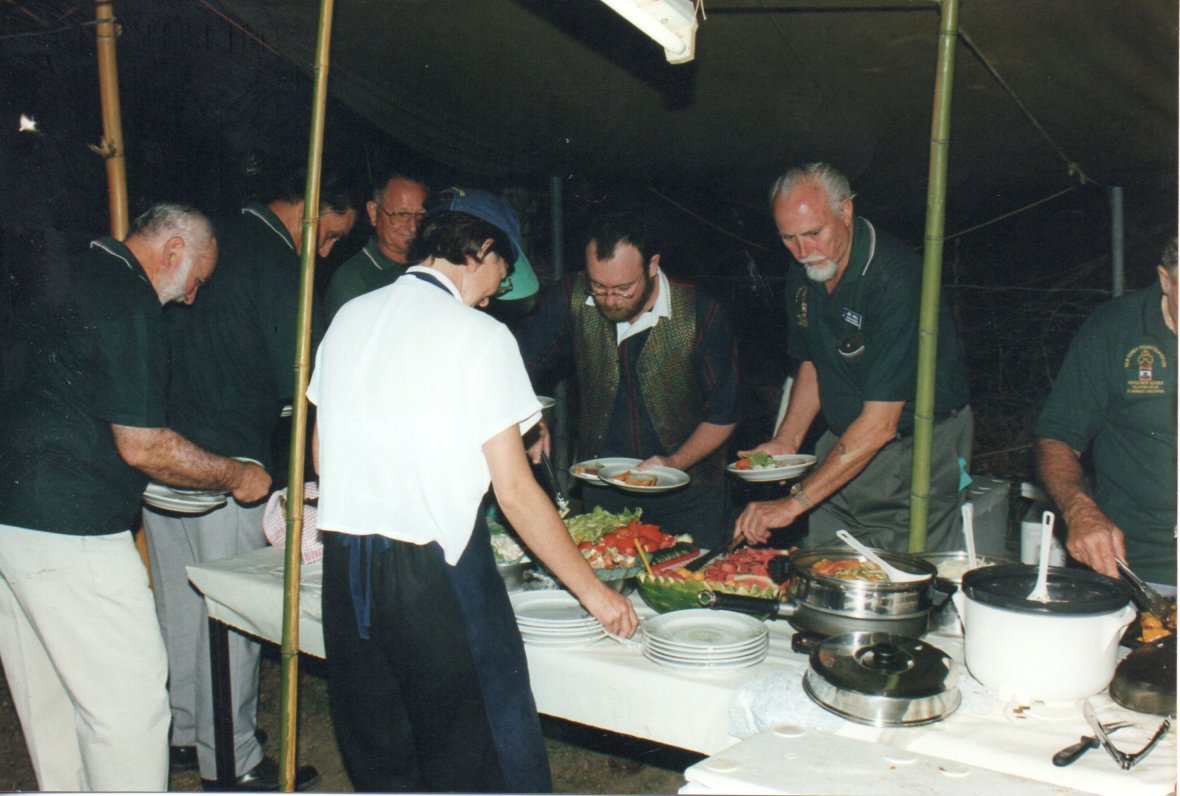 It was the policy for the gentlemen to get the ladies meal first.
​Bob Collins, Mal Zimmerman, Norm Mundy, David Newton, Joe Hall. 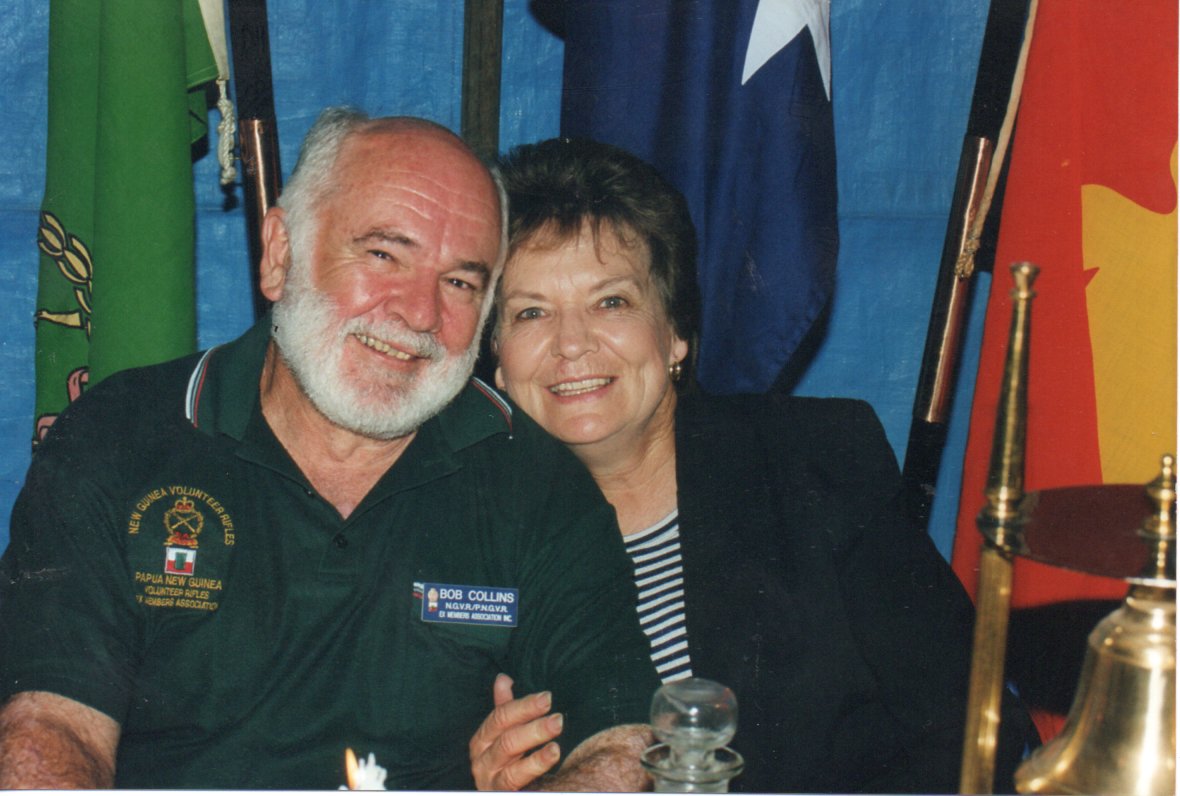 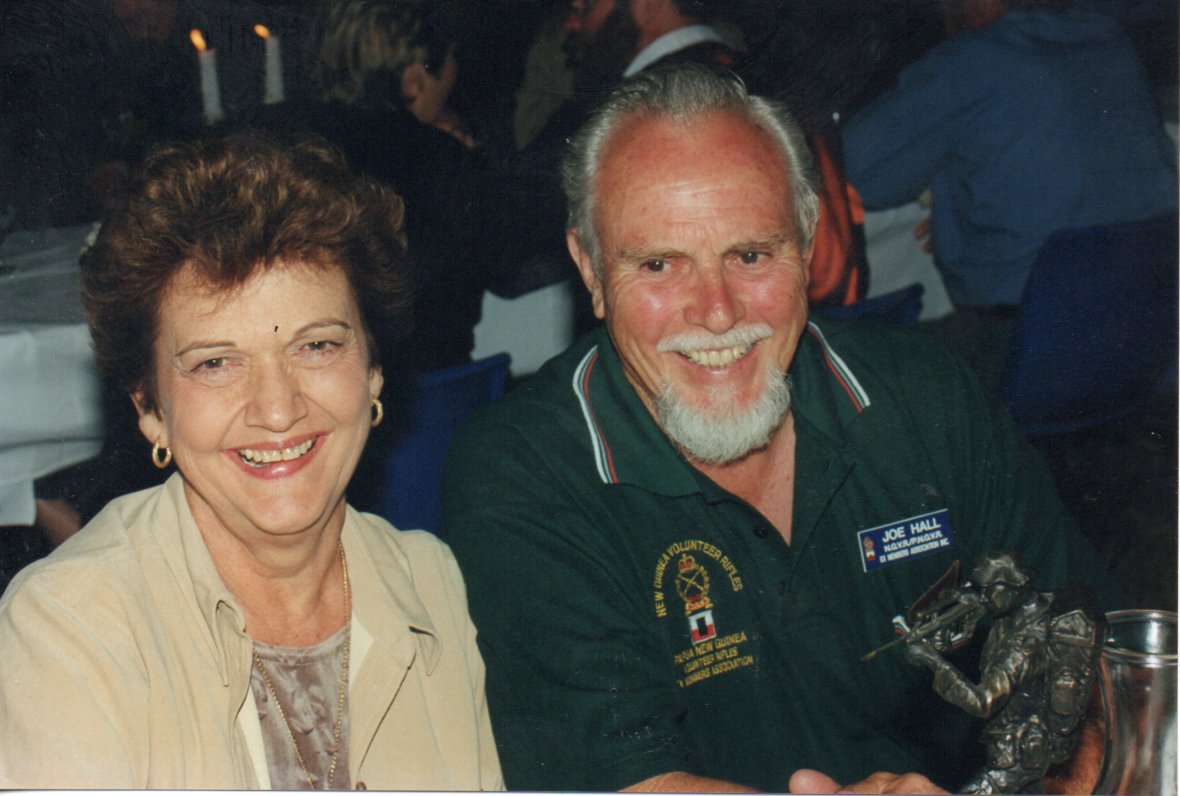 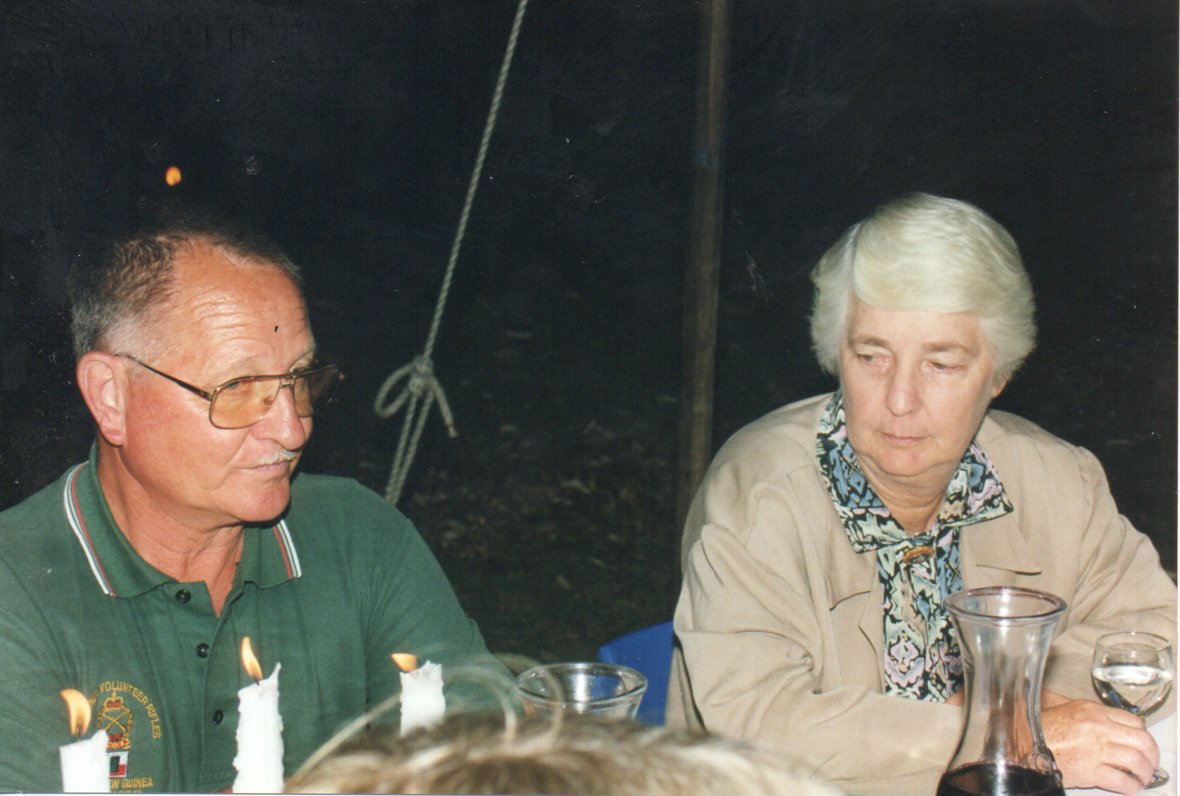 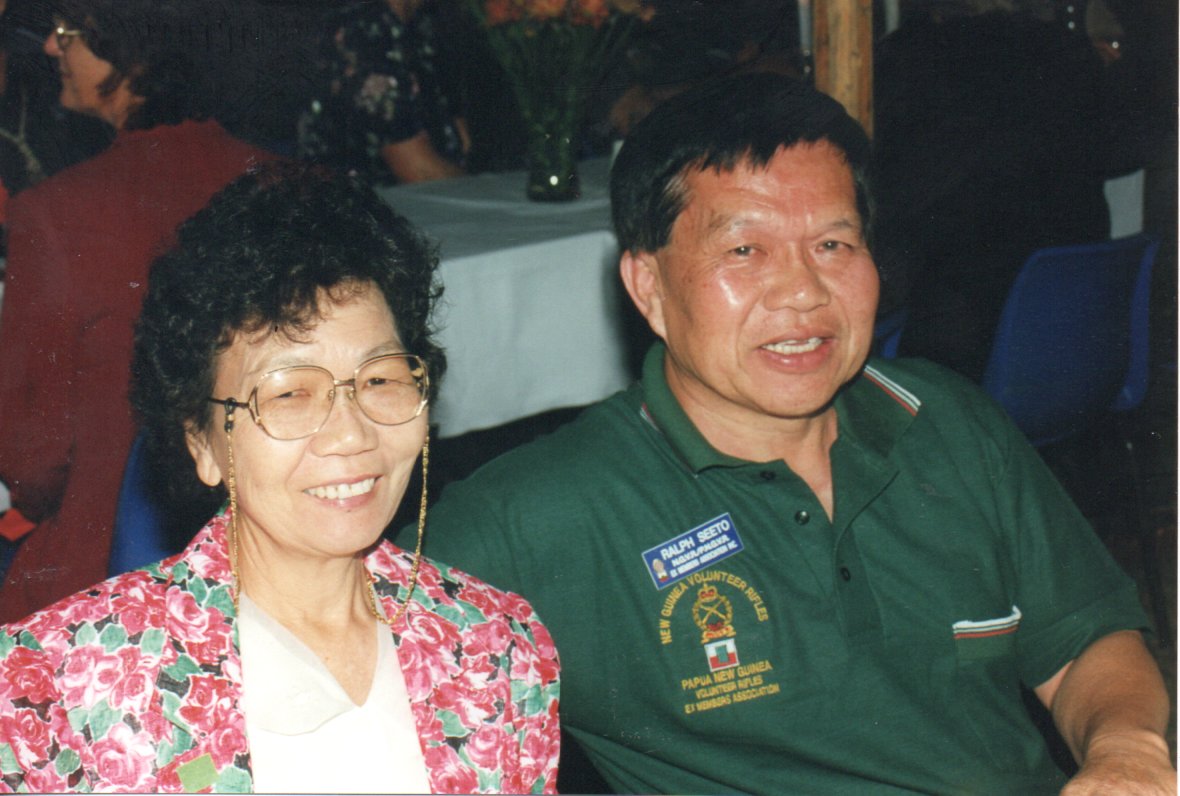 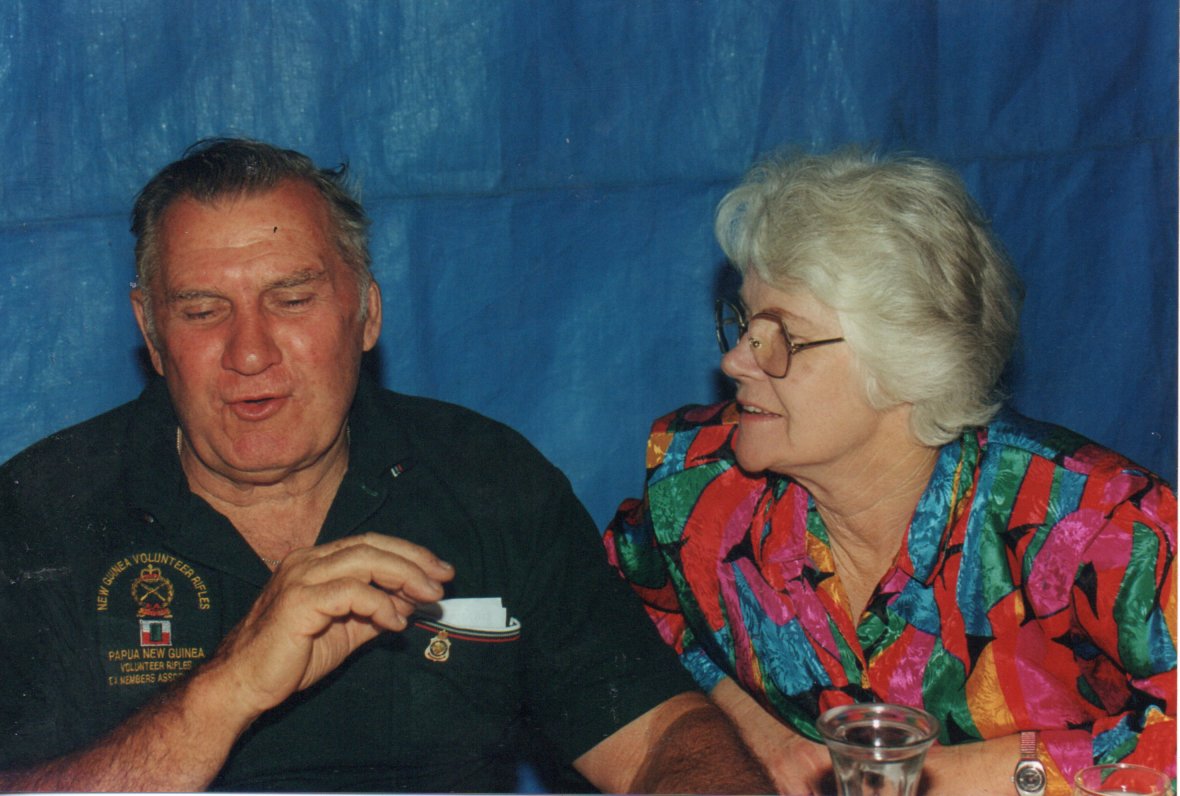 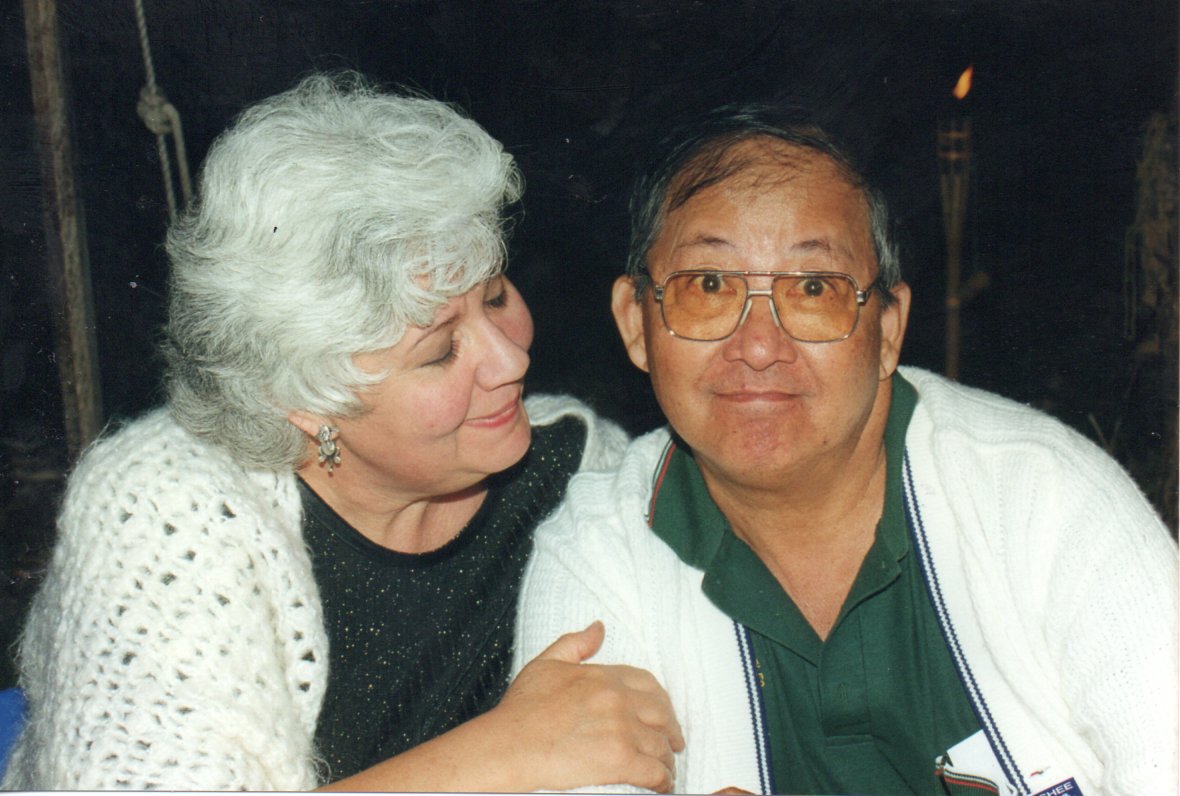 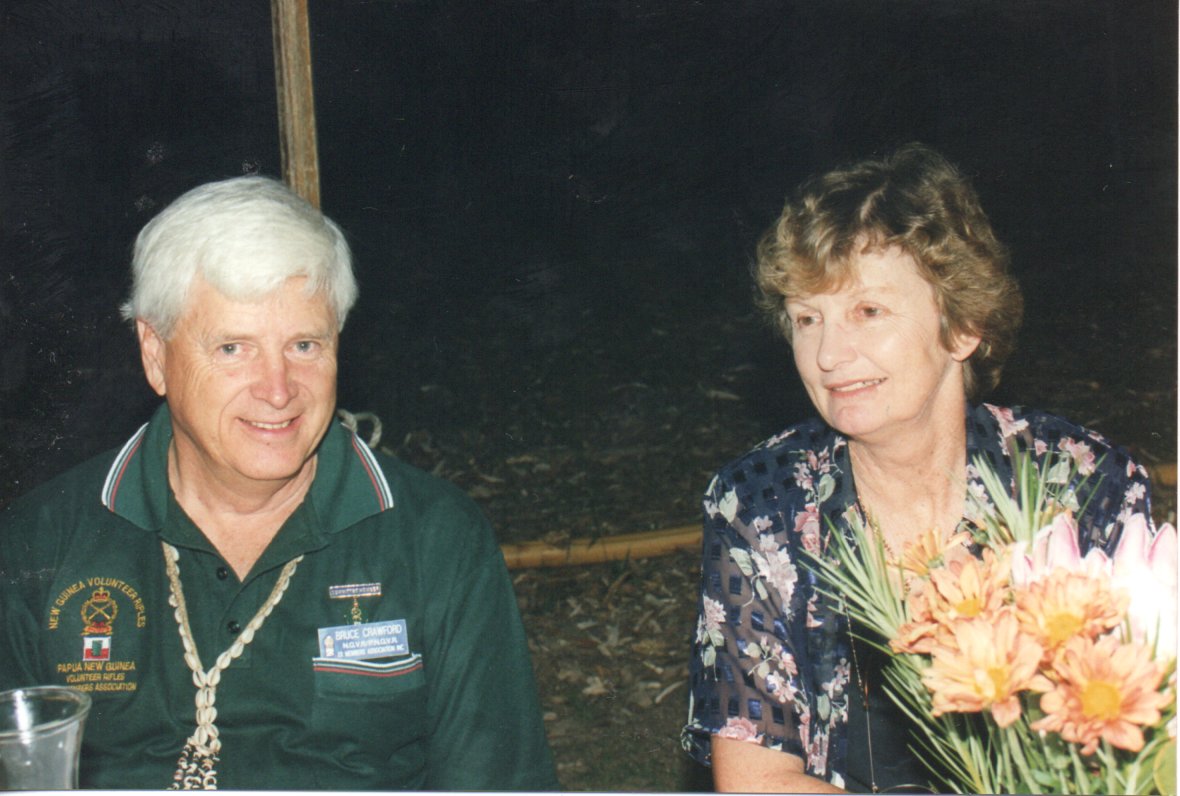 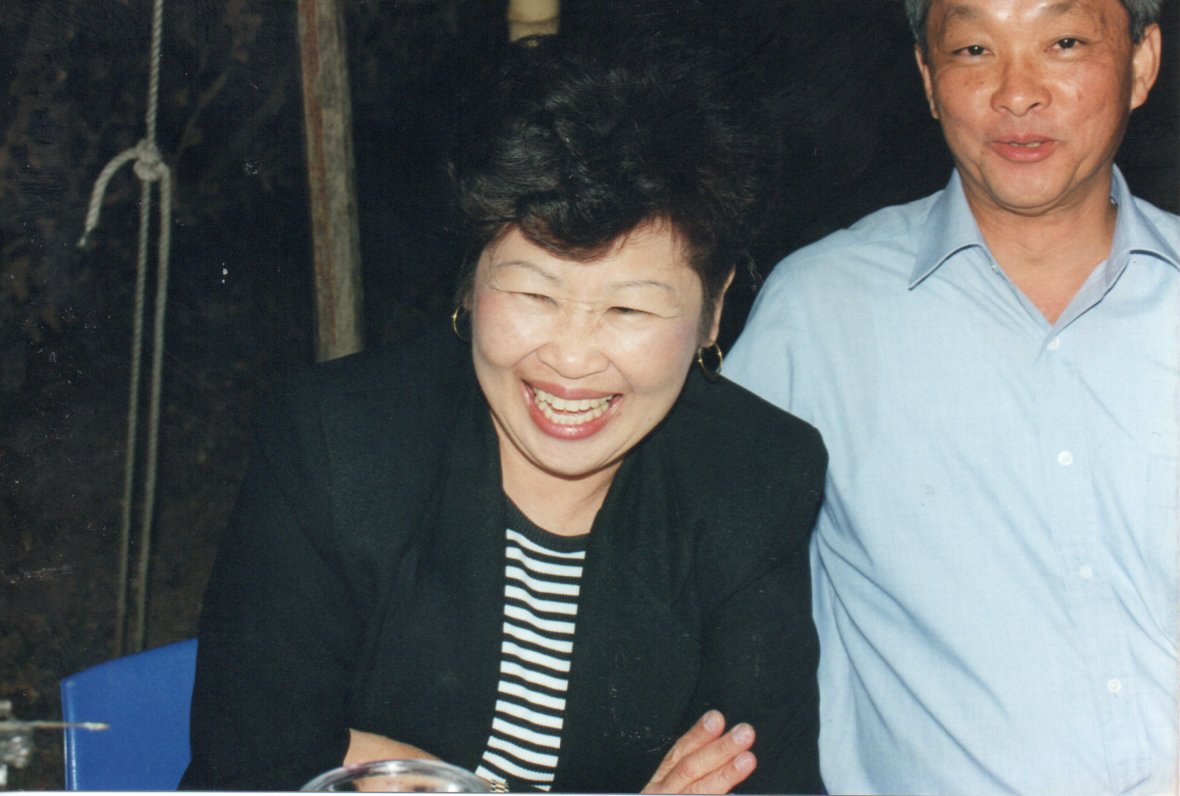 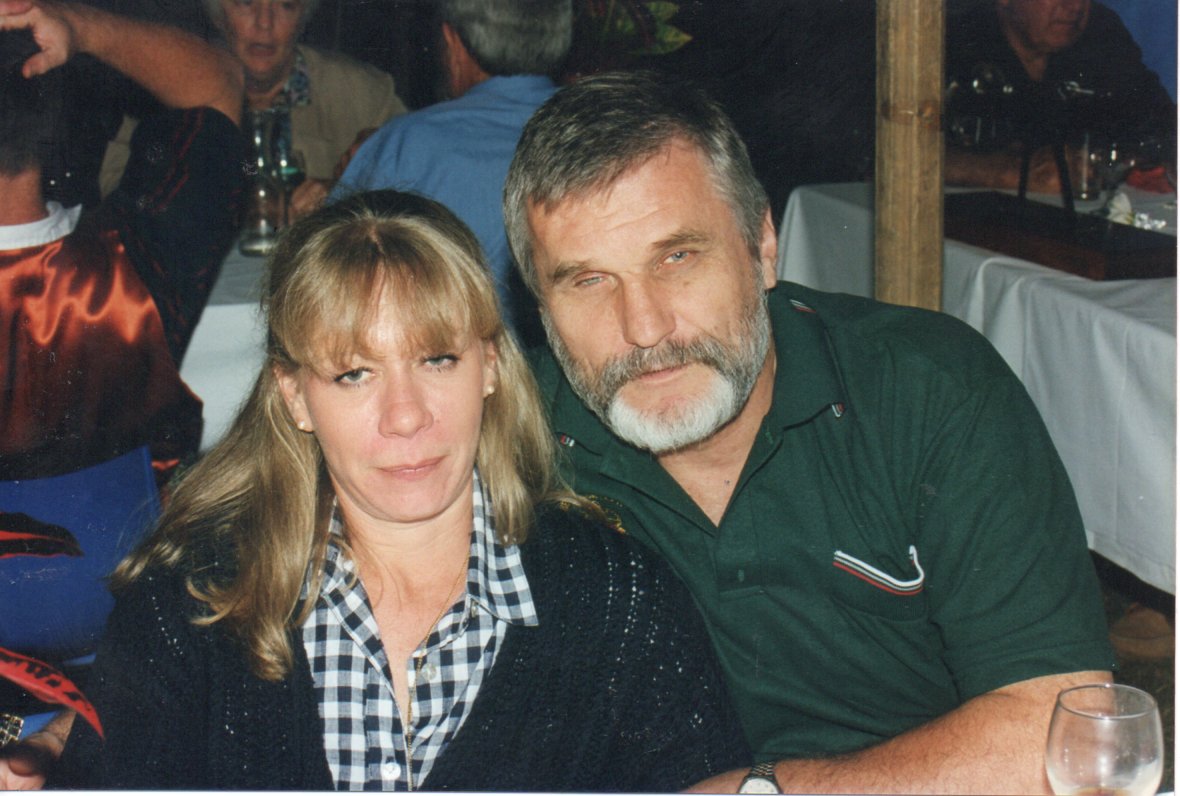 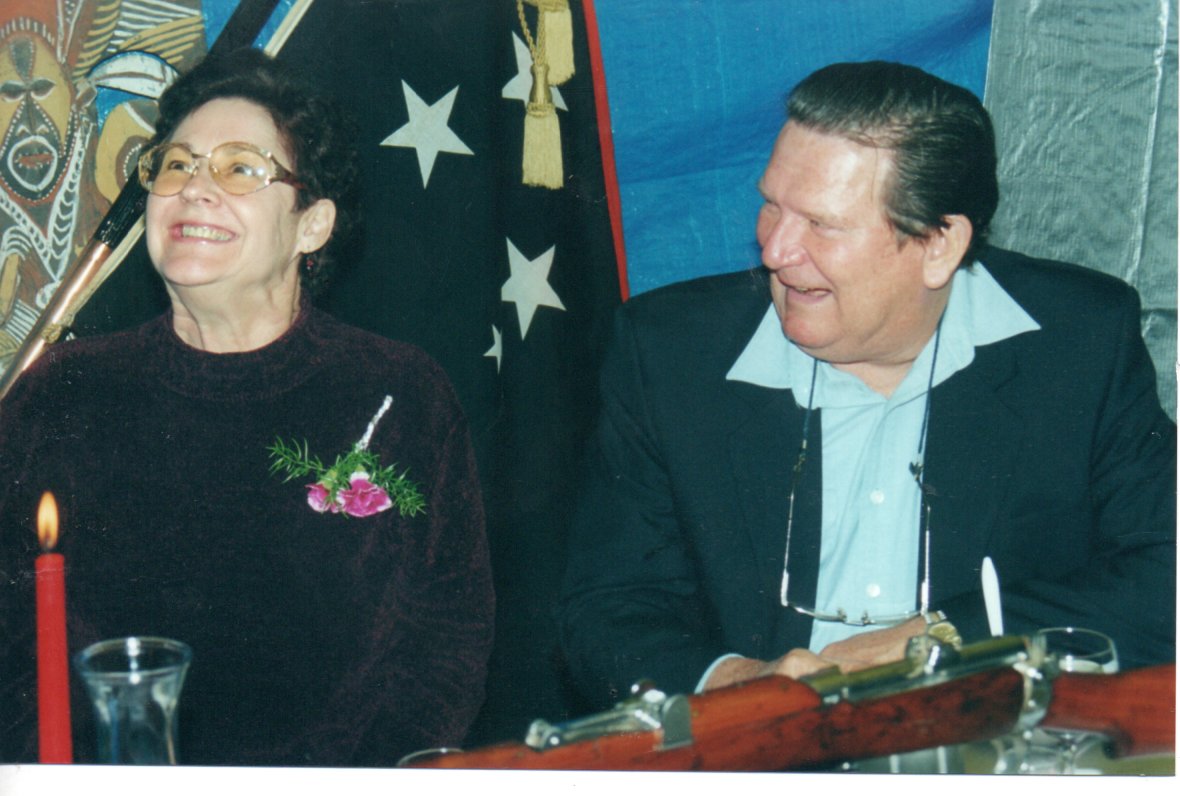 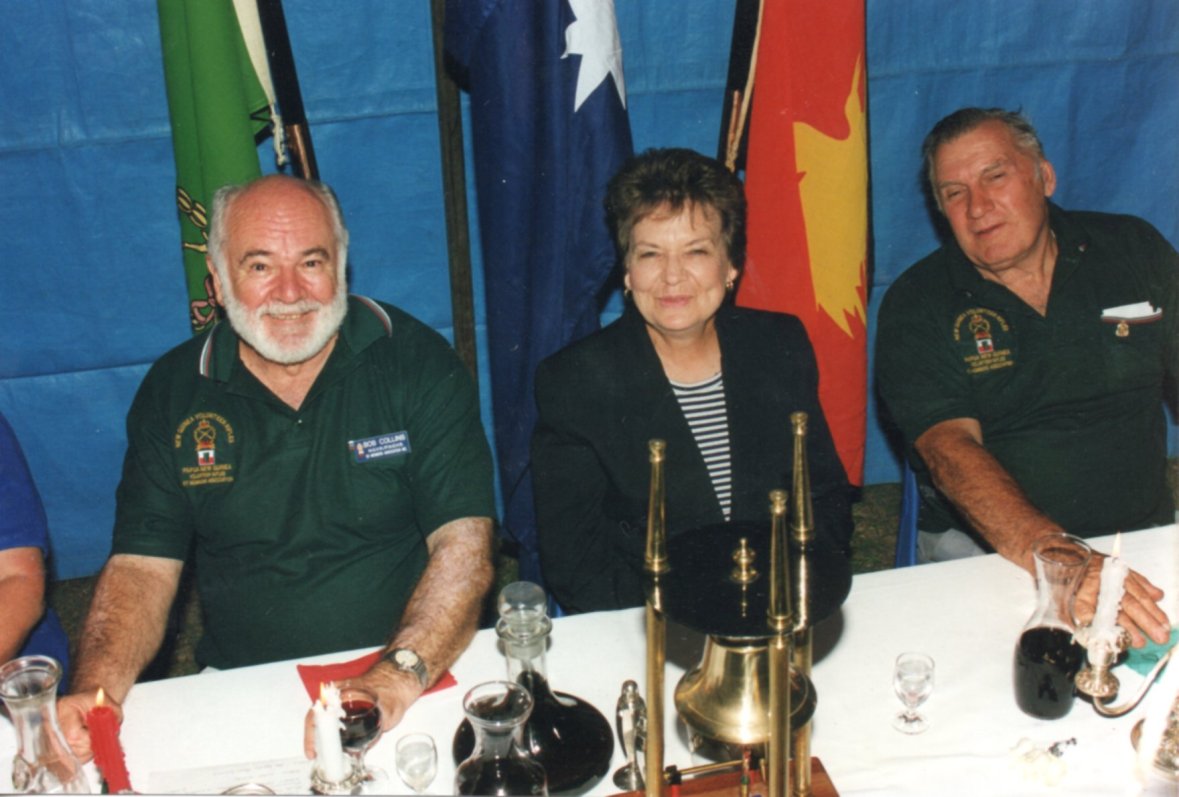 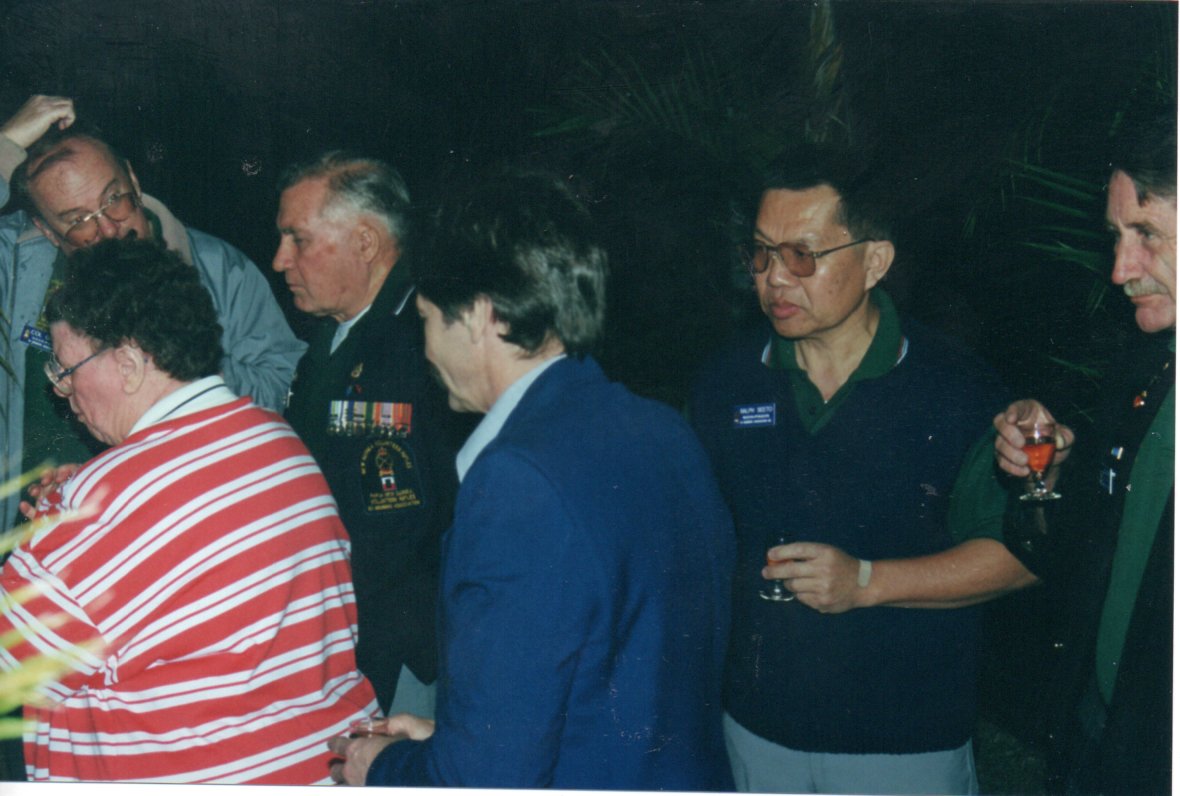 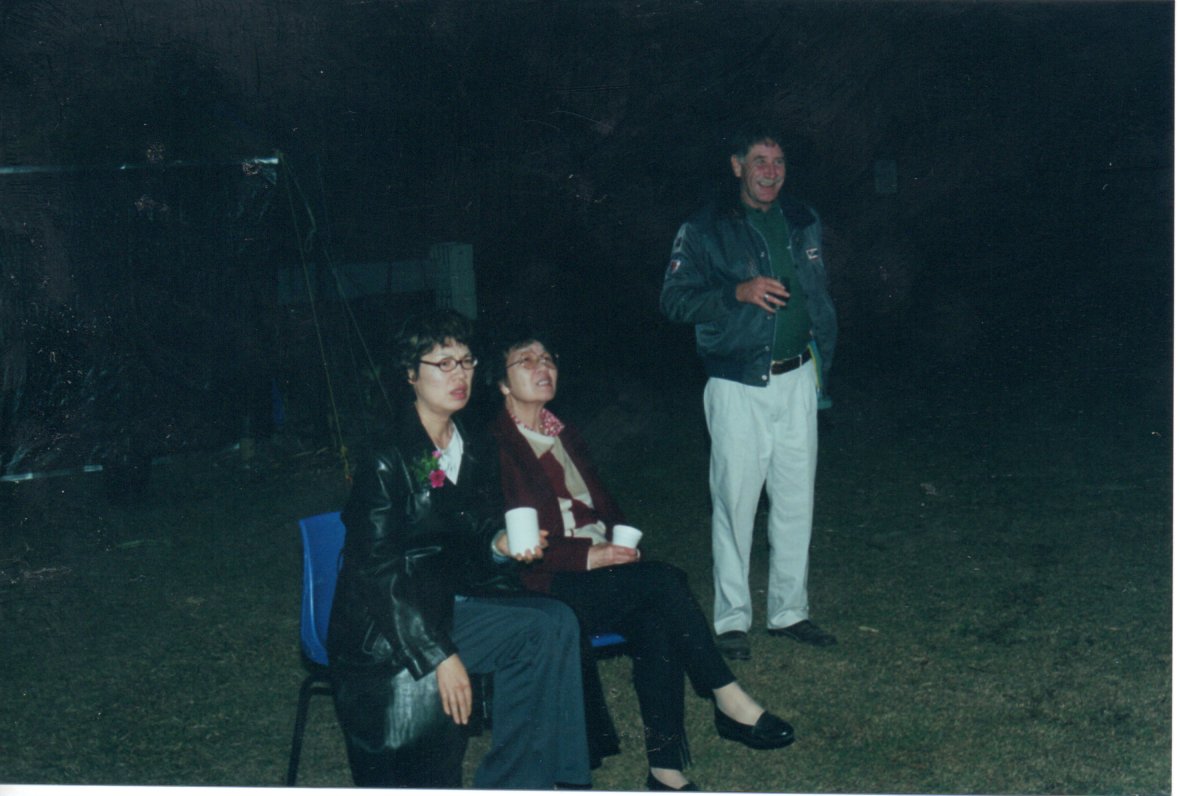 After the dinner.     Coffee by the bonfire.   ?, Lilly Seeto, Alistair Martin.