Once again  Brisbane turned on  a beautiful  sunny day for the occasion of Anzac Day.  At the assembly area we saw what has  become the usual excitement of old friends seeing each other for the first time in a year or sometimes many years. This year we were fortunate enough to have obtained the services of the 9th  Battalion  Royal Queensland Regiment band of pipes and drums thanks to George Badgajluk.

Our contingent was ably led once again by Colonel Harry Green, followed by the Flag Party, Banner and main then came a Dodge, vintage World War II Troop carrying truck, acquired for the occasion by Alastair Martin. This mode of transport was used to convey  some of the elderly N.G V.R members who would have found the length of the march a little bit difficult. As the contingent passed  the Dodge at the transport area waiting to join us, Jack Goad and his mates had smiles from "ear to ear". I think the Dodge either brought back a few memories of yesteryear or they must have seen something to draw their attention among our members  m marching past.

After the march a small wreath laying ceremony was held in the Hall of Memories at the N.G.V.R. Plaque, dedicated to our fallen.   Tom Lega MM. and Jack Goad had the honour of laying this year's wreath. With formalities completed for the time being it was   down to the Stock Exchange Hotel five minutes away, to get down to the social part of the day, to enjoy finger foods and light  refreshments. The  9 RQR Band also joined us for a short while.

A display of NGVR and PNGVR memorabilia due to the dedication of John Holland was available for viewing. lt was of an excellent standard and I would like to thank John on behalf of the Committee and  Members for all the work and thought that had  gone Into the display. It was extremely interesting and you could almost see the NGVR members with their brains ticking over remembering  when and where. John has agreed to present a similar display next year with different material for viewing.  It ls pleasing to see that   the wives and children showed great interest in the display and asked many questions of the Unit's activities, this also would help  them understand Dad's life as a soldier.

Our hosts looked after us extremely well with the food and service being plentiful to everyone's satisfaction. On thanking the staff at the conclusion of the day we were congratulated on the standard of our behaviour with no drunks to report once again. I feel we have found a "home" for Anzac Day. Throughout the reception there were the various toasts, The Queen, Anzacs and of course the  Regiment. These were followed by a speech by Colonel Green and a quick meeting to discuss the Association's constitutional  amendments. As the day drew on, it was noticeable that the members were staying longer and as usual  everyone seemed to be enjoying themselves and some so much that it was early evening before they left.

In conclusion, our host looking after us so well, no other rowdy functions in the same rooms, and asking the opinions of other Members we have decided to hold our plaque dedication to the Montevideo Maru and next years Anzac Day functions at the same venue. Thanks go to the interstate and overseas members who, some at great expense, showed their dedication in making the journey to Brisbane for the occasion.
(By) JOE  FISK 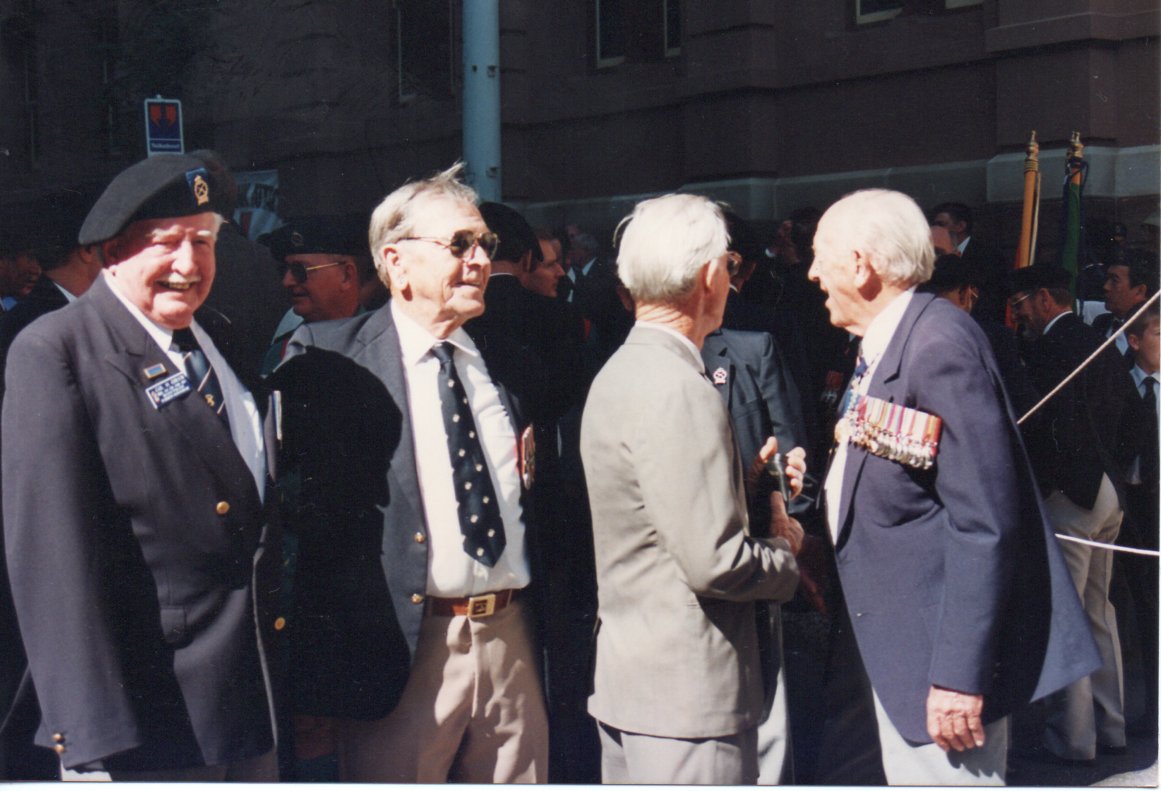 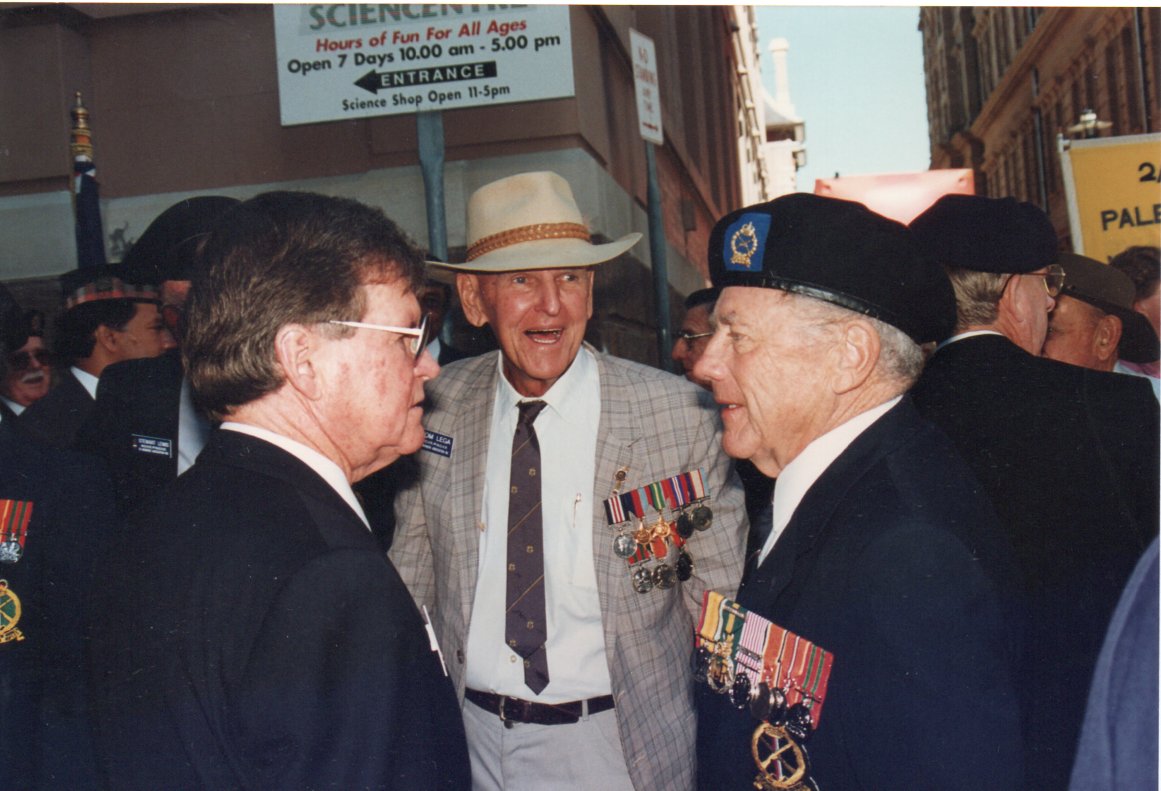 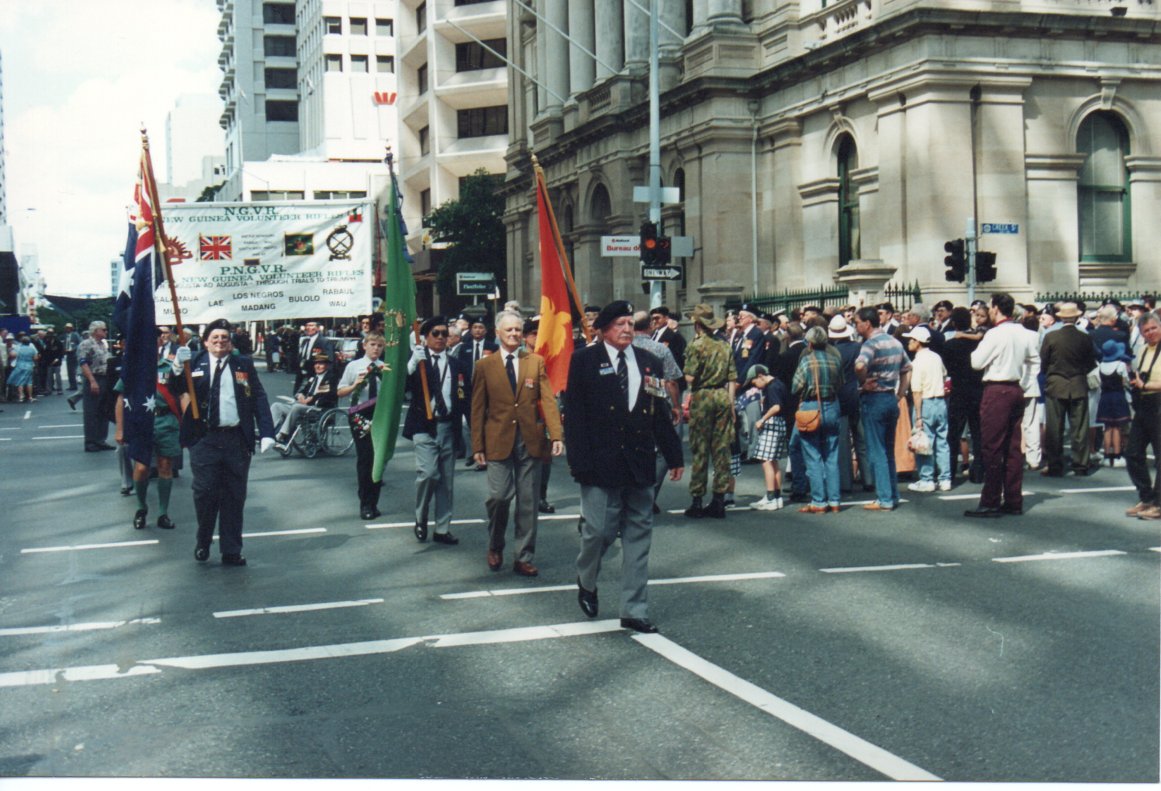 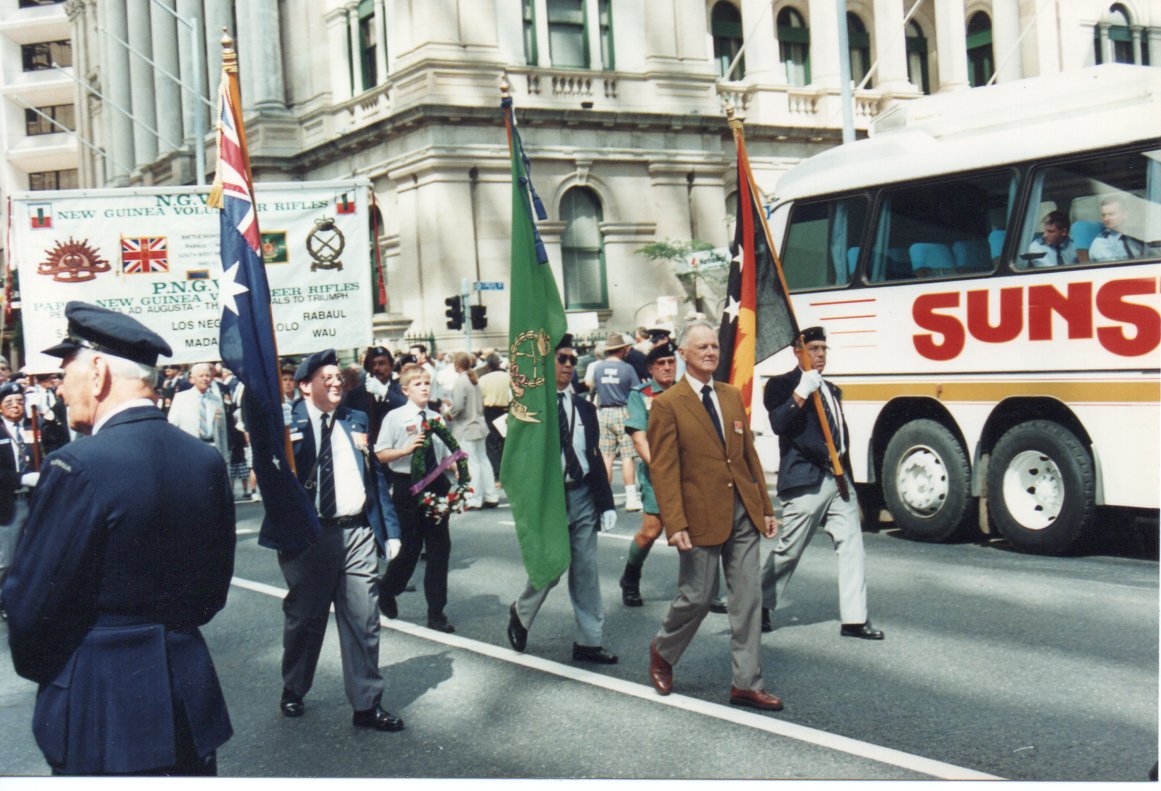 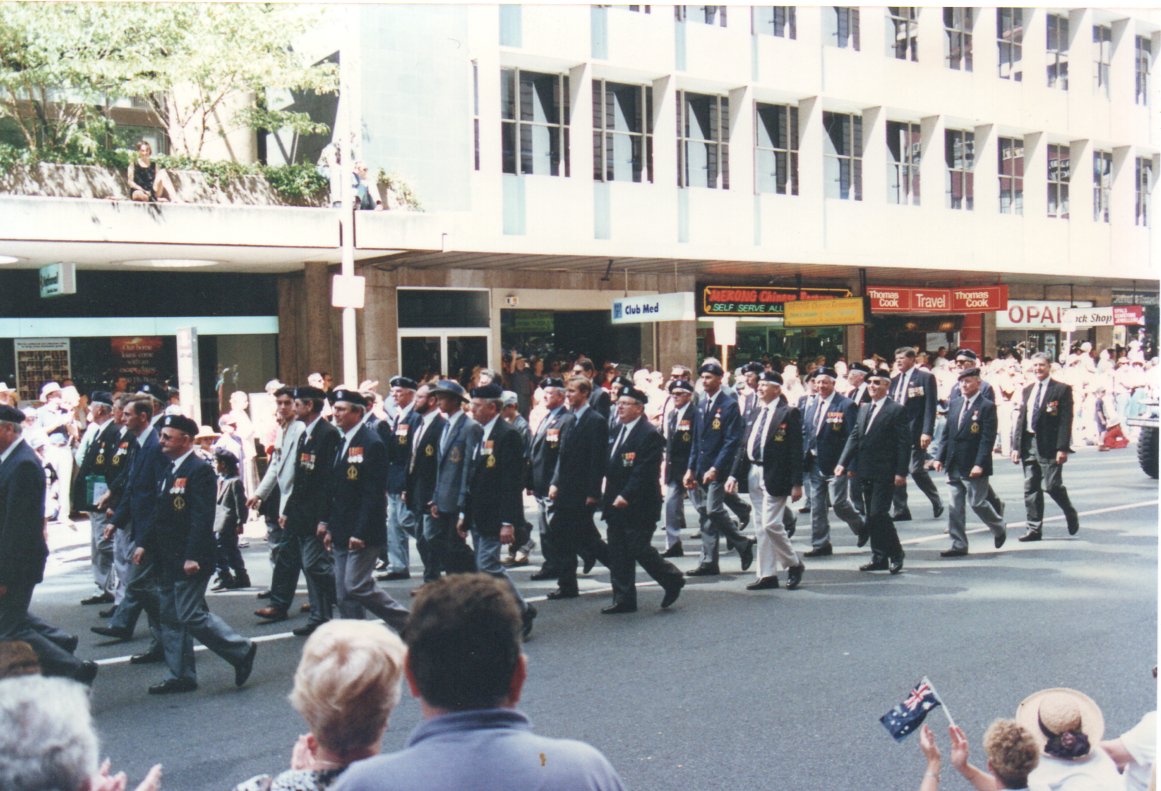 Association members during the march 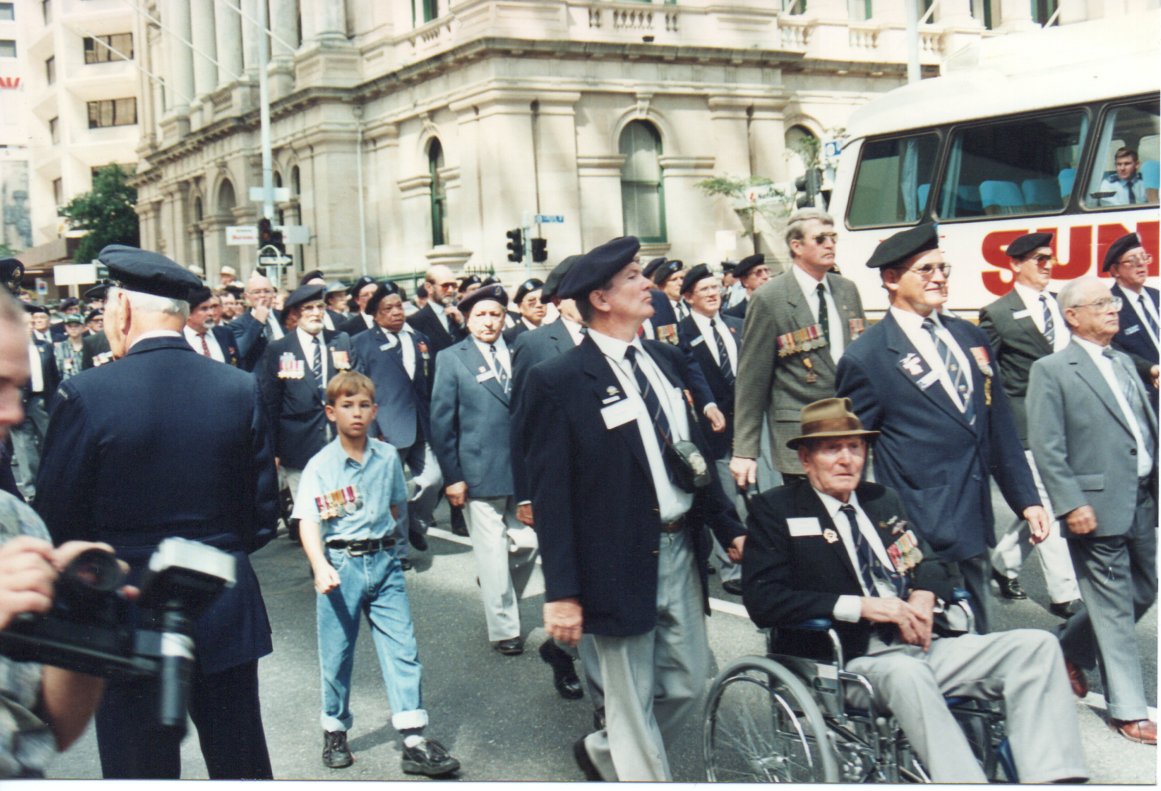 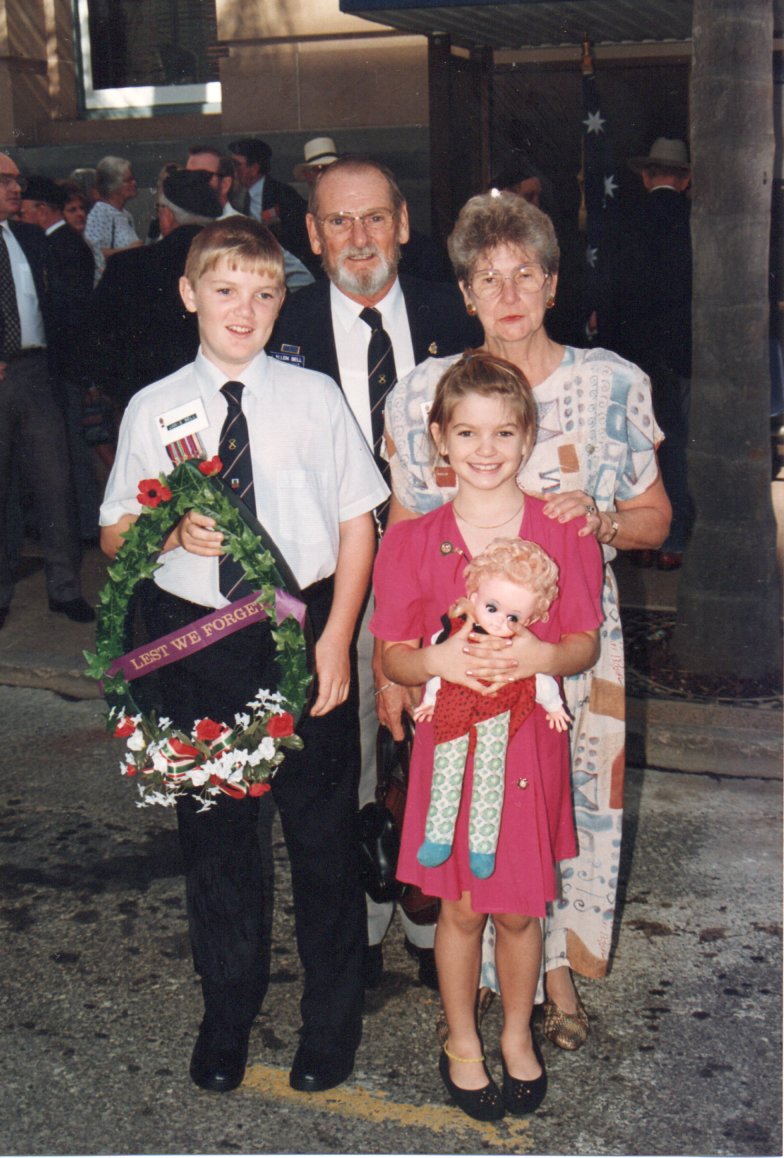 Alan Bell and his family in the Hall of Memories with a wreath for the Service. 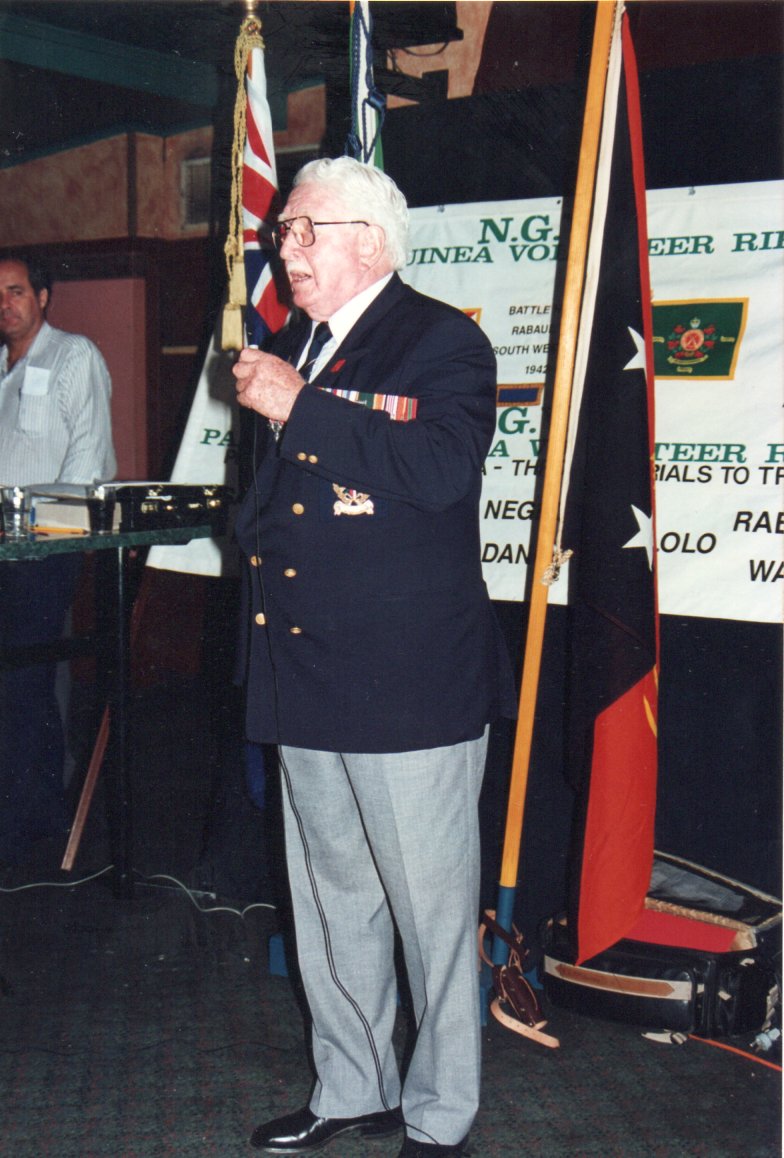 President Harry Green addressing those at the reception. 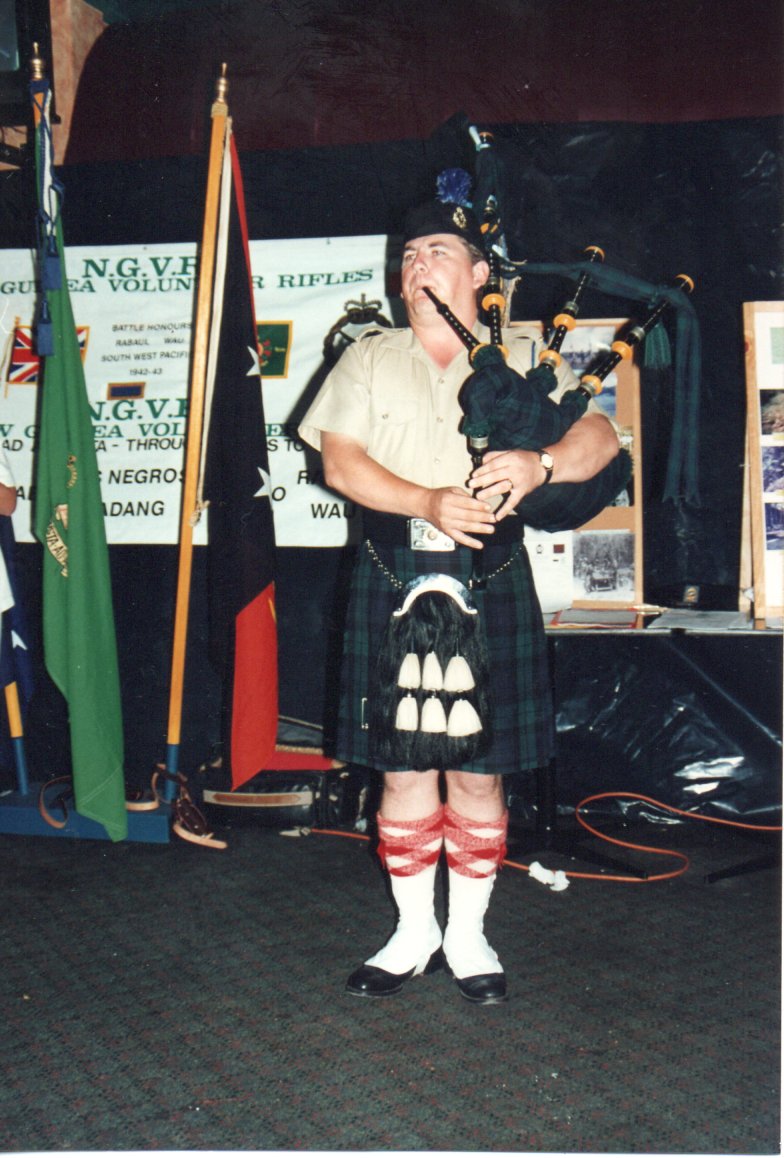 The Piper at the reception 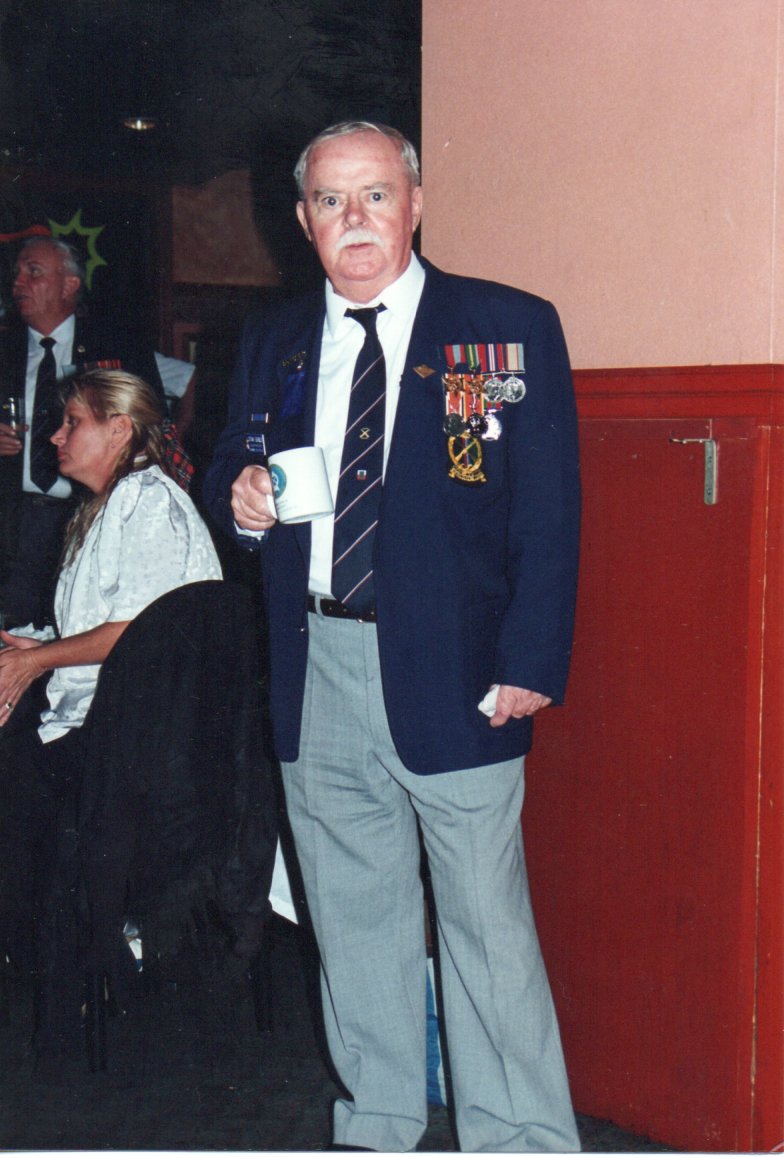 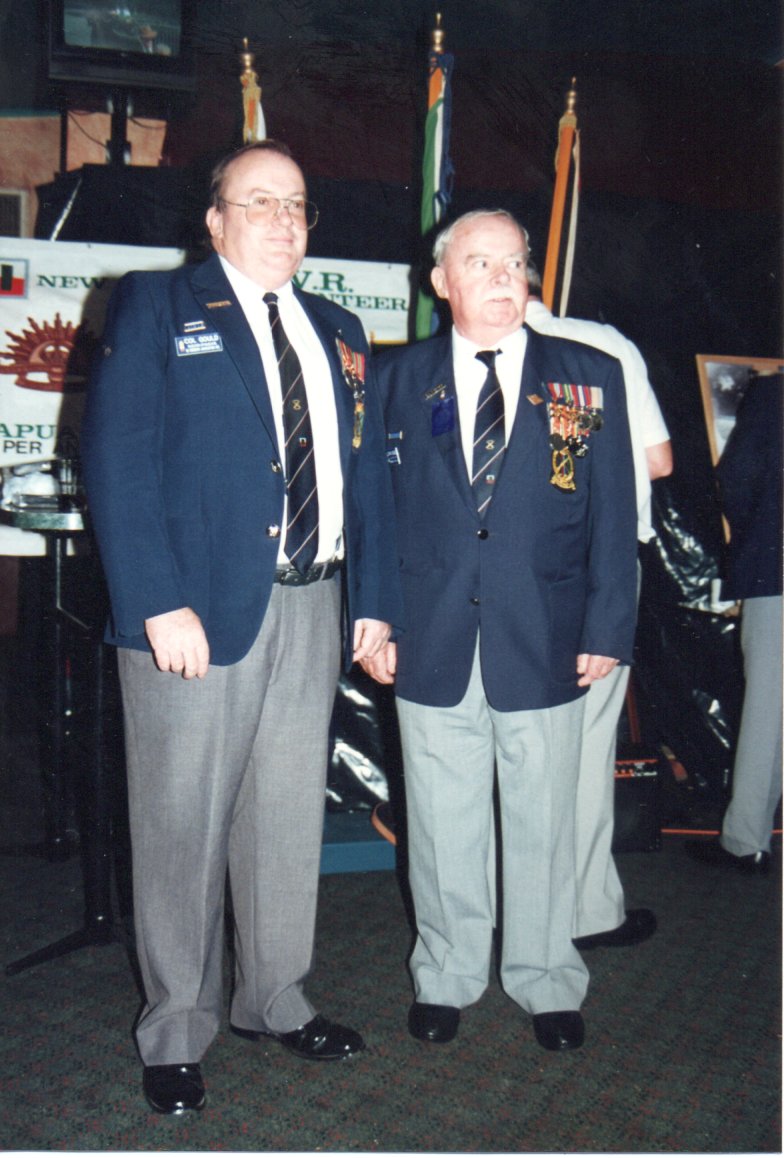 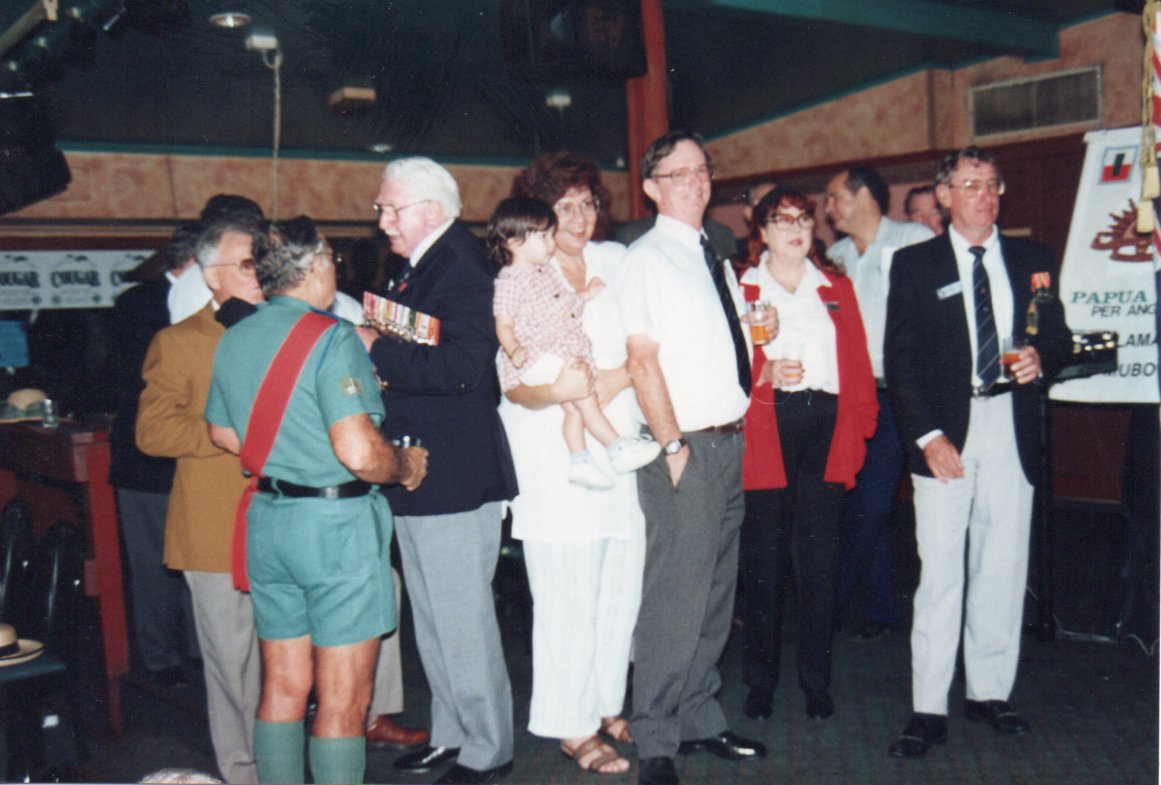 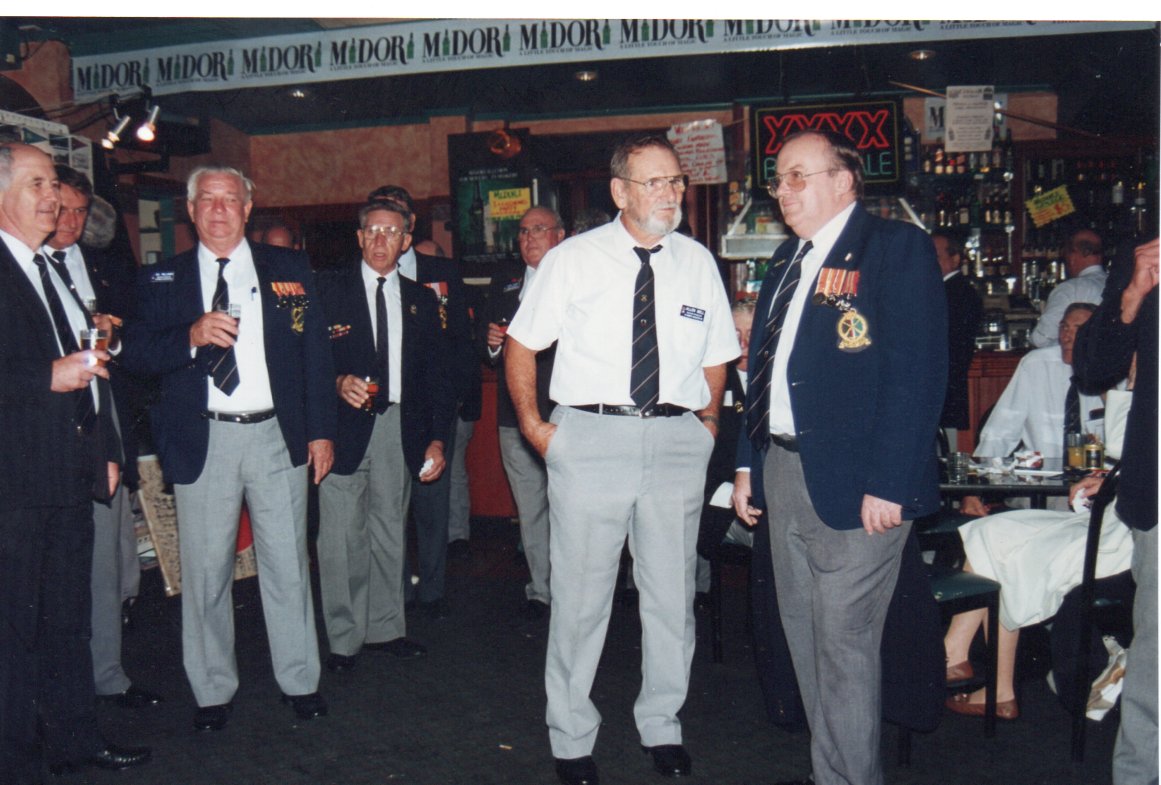 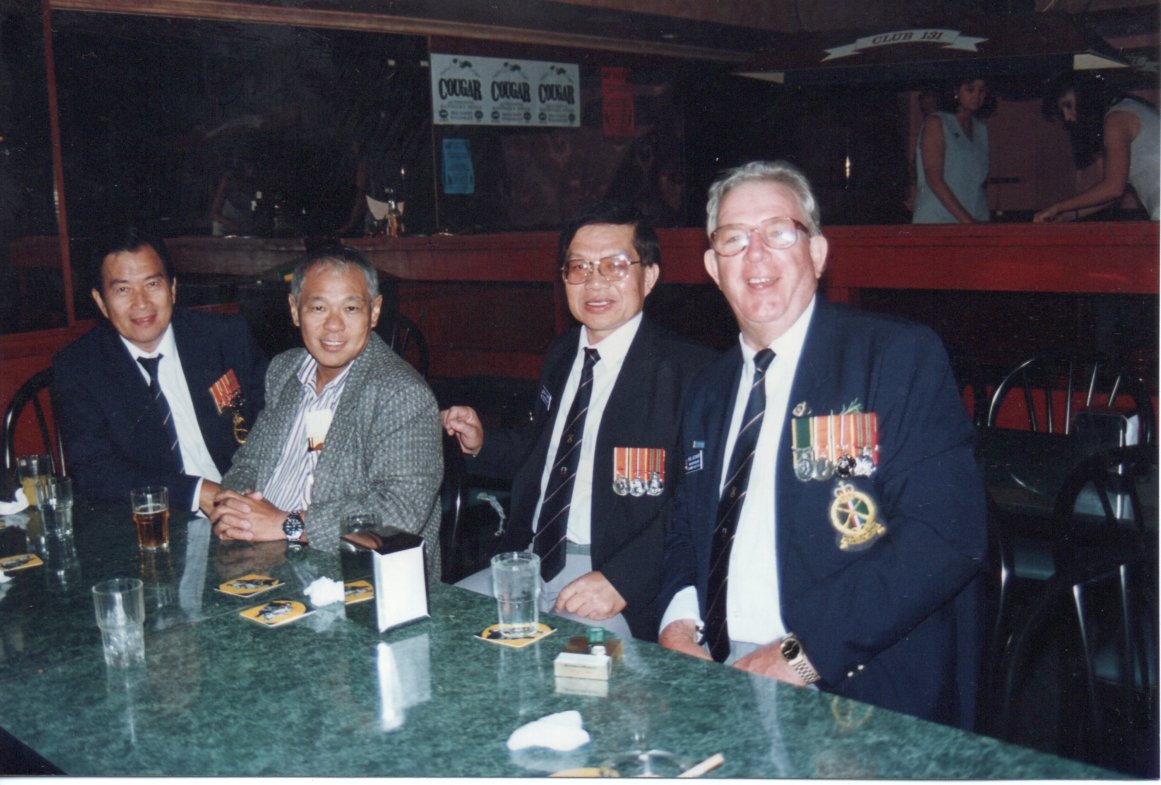 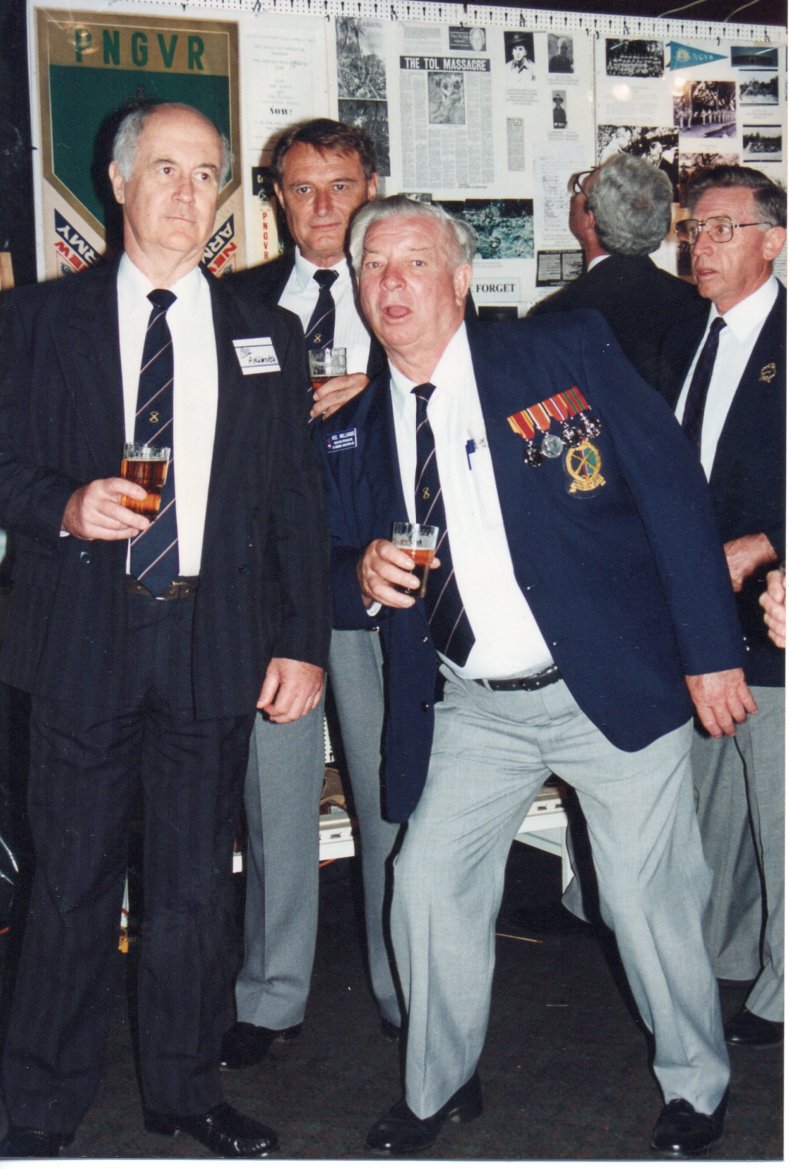