D Coy was raised in Port Moresby when PNGVR commenced in 1951.
When PNGVR raised a Company in Wewak under Maj. Frank Hoeter, D Coy was relocated to Wewak. 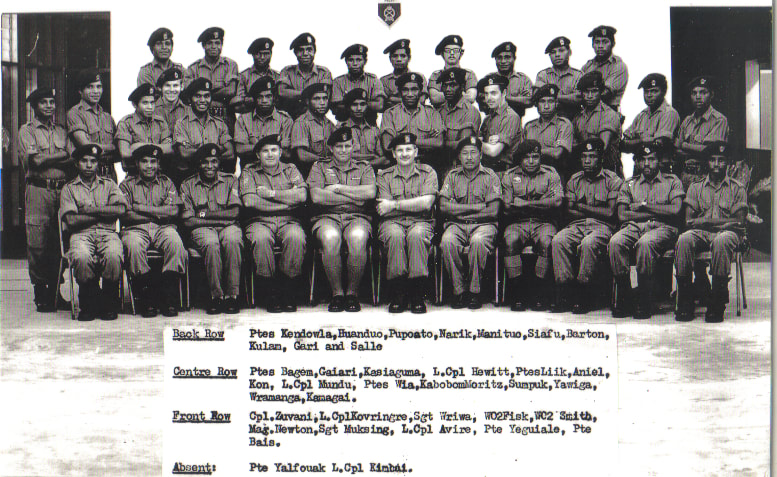 ​PNGVR - WEWAK
In the mid sixties, I was posted to Wewak with Treasury. Frank Hoeter was also posted here, and proceeded to set up a PNGVR sub-unit - Detachment Admin Company. It was just at the time that enlistment was extended to locals, provided that they had a reasonable standard of education and a grasp of English so that they could assimilate the instruction given. I was then a Sergeant, and Dave Harris was one too. Bob Horner was a Corporal, as was Bev Inman. Together we shouldered the burden of weapons training, among all the other little things.

The standard of education was a trifle suspect, as was the level of English. We stumbled through with a mixture of English and Tok-Pisin, and by and large we got the message across on most things. Weapons safety was a real concern, though, and Dave and I were always trying to figure out how to get the troops to remember safety precautions in particular. Most of the lesson content mysteriously disappeared during the week between parades, and the first part of each new lesson was spent laboriously getting the students to remember what had been drummed into them seven days before.

Some things cannot be done in the politically correct world we have today, but then it was open slather. Dave ground his teeth at the blank looks he got when opening his spiel by asking what precautions must be taken with the 36M (Mills) grenade. He sneaked a live fuse set from the armoury, cut off the detonator, and put the fuse and .22 cap into a drill grenade (yes, white and with holes drilled in it). At the beginning of the next lesson, he again asked what the first thing one did with a grenade. No response, so he suggested ‘Pull the pin?’. On getting beaming nods from the whole class, he pulled the pin, and put the grenade on the floor. A satisfying pop resulted, and copious amounts of smoke came out of all the holes.

The resulting stampede, like a horde of lemmings going off the drill hall veranda and onto the grass outside was wondrous to see. I really thought I would wet myself. The lesson was indelibly etched into every student’s mind though. I conducted a 25 metre range shoot out in the bush, and had secreted a blank SLR round in my pocket. After the shoot, and after weapons were cleared and the admonition commencing ‘It is an offence both civil and military....’ given, I picked up a rifle and palmed the blank into the breach. No one was paying any attention until I pulled the trigger, and Bev Inman, who I had told to go and pull down the flag from the butts, let out a shriek and fell down the hill, effectively covering his chest with the tomato sauce I’d provided him with. To say that the incident burned into the brains of all present would be an understatement.
​
We had fun in those days. We entered a PNGVR team in the local baseball competition and won it in our first season. I proudly paraded the trophy through the ranks in open file at the next parade. Dave, Bob Horner and I played in the PNGVR Rugby League team in the local competition, but we were not very successful there, despite Frank Hoeter’s best efforts as a referee. The locals proved extremely enthusiastic, adept at fieldcraft, and even surprised us old hands. It was a good unit.
Maj. Peter Rogers DFC
​ 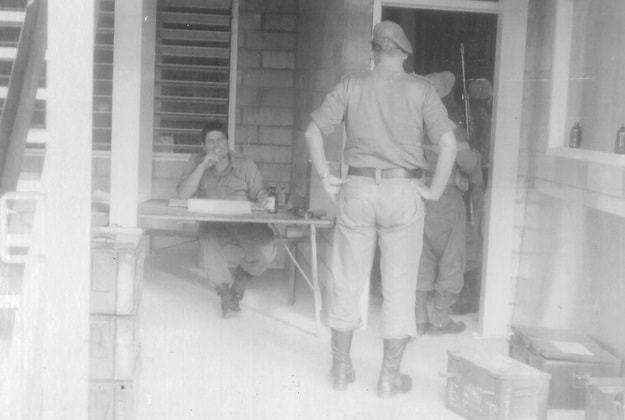 The QM, SSGT Bob Gilroy with MAJ Nev Harris (back to camera) at the D Coy Drill Hall in Wewak 1966 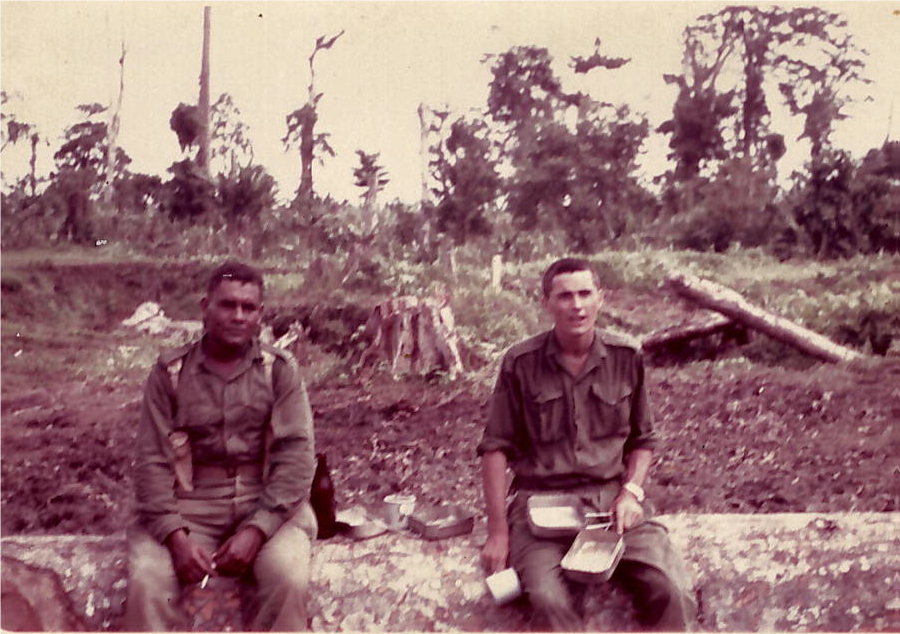 Carl Diercke and Michael White on bivouac in Wewak in 1967.
​ 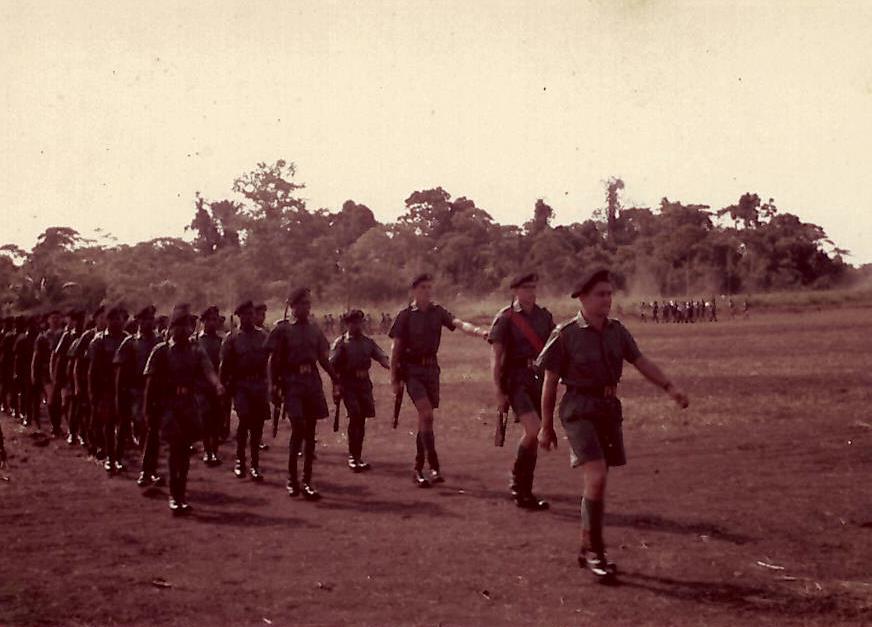 D Company on parade in Lae Camp 1966.  Alan Wadsworth leading with SGT Jim Cattermole as the Colour Sergeant and Michael White as right marker, behind him. 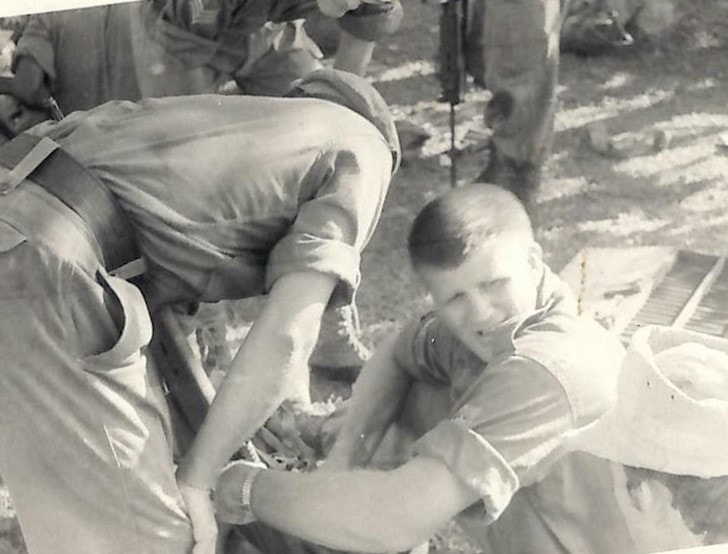 WO2 Dave Harris at the Drill Depot in Wewak