​
Extract from the address by Bob Collins to members and guests at the field Dining Night on the 14th July 2001.

As you are aware four of us from toe Association, Joe Fisk, Norm Mundy . Barry Wright and myself have just been to America for a reunion of the 1st US Cavalry Division, which was held at Killeen, a small town next to Fort Hood in Texas.

The background to our trip came on a camping trip back home in Queensland, when after a beer during the afternoon, a sherry before dinner, a wine during dinner and a Port after dinner, the idea came up that we should renew acquaintances with the 1st Cavalry Division.

The background to this is that in 194-4. after NGVR had been, disbanded and personnel mainly posted to ANGAU ( to provide local advice, scouting and liaison with the native people etc) General MacArthur decided! to establish a base in the Admiralty islands  (Menus is the larges; Island) to isolate the Japanese forces at Rabau! and the Solomons. The new base would also serve as a jumping off point for the invasion cf Hollandia, the Philippines and Japan.

The 1st Cavalry Division was the basis of “Brewer Force” which was given the the task cf taking the Admiralties. The 5th Cavalry Regiment was given the task of launching the initial! attack, and they gave the task to their 2nd Squadron, 5th Cavalry, which had NGVR/ANGAU personnel attached.

​That is the background so now onto the American trip.

The 1st Cavalry Division has a battalion in Kuwait and one in Bosnia. One Battalion is on 2 hours notice to move, fully equipped, in anywhere in the world. .All soldiers on rostered standby have a beeper, and cannot move mere than one hour's travel from base. It is also a court martial offence to have an alcoholic drink during this standby period which could last up to 3 months.

One Brigade is on 48 hours notice to move out. There are several railway lines running into the Fort and all the equipment, including heavy vehicles etc for a Cavalry Brigade is held at battle readiness on numerous flat cars with army locomotives attached, just waiting to move.

​America is the strongest country in the world today. Their army is the best equipped and the soldiers know this and are proud of it They are extremely well trained and motivated.

There were 1300 people at the reunion which was well organised and held over a period of 5 days. The hospitality shown to us was out of this world, and everyone made us reel extremely welcome. There had been some advance publicity of our visit so quite a few knew we were coming.

We look with us a NGVR/PNGVR Association plaque to present to 2/5 Cav., and this was presented at a luncheon held r the 5th Cavalry Regiment.However to our surprise we received some presentations in return.
​
During the Reunion The paraded their colours on 9 number of occasions and. with their service history, they had quite a number cf Battle Streamers on their Colours. Each Streamer denotes a battle in which a Unit of the Division was awarded a Citation. We were presented w«h a Battle Streamer which denotes the US Presidential Distinguished Unit Citation tor the battle of Les Negros.

The Battle Streamer was presented to our Association by retired ( 4 star ) US General Meyer, formerly from the Chief of Staff of the US Army. There is only one higher post in the US Army and that is a posting to the Joint Chiefs of Staff.

As our Colours are laid up in the War Memorial in Canberra, we will carry this battle Streamer on our PNGVR flag.

The next presentation we received was a ‘Giedon’. Giedons are very old and were used by the horse cavalry lo denote the location of commanders of units in battle.

The tradition continues to this day and commanders earn a Giedon on their armoured vehicles for the same purpose as the horse commanders did. Tills Giedon, was presented to us by the CO of 2/5 Cav. Regt, and was carried on his command Bradley APC. during the Battalion's stint in  Kuwait.

I made comment at the beginning that the purpose of going to the United States was to renew acquaintances that were forged during WW 11 at Los Negros, where the US Citation was awarded to NGVR/ANGAU as part, of ‘Brewer Force’.

The original citation which was presented to B Coy PNGVR in 1952 and displayed in the Company Drill Hall was destroyed during one of the volcanic eruptions.

The Association has been discussing for some time how to obtain a duplicate copy of the original citation.

I am pleased to advise that General Meyer (Retd) promised us during the 5th Cav luncheon that he would ensure that we received a copy of the original Citation, I understand that a Brigadier General in the Pentagon has been given the task of getting a duplicate Citation for the Association.

In the meantime we have teen given a copy of the 5th Cavalry Regiment Citation, It is appropriate that tonight we present t to our History Officer, John Holland. as it was his father who was presented with the original Citation at Rabaul in June 1952.

Unfortunately the events of 11th September, 2011 (the flying of aircraft into the World Towers in New York) meant that the US Army's focus was diverted and the search for a copy of the Original Citation was cancelled.    The Museum still has a copy of the 5th Cav Regt Citation. 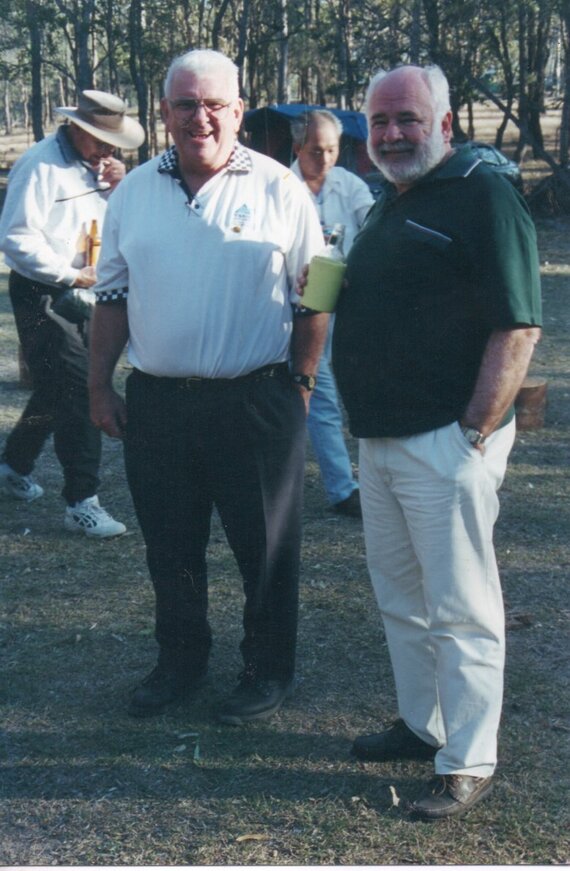 Prior to the commencement of proceedings.
Neil Lega and Bob Collins.
​Neil is the son of Tom Lega MM (NGVR?ANGAU) 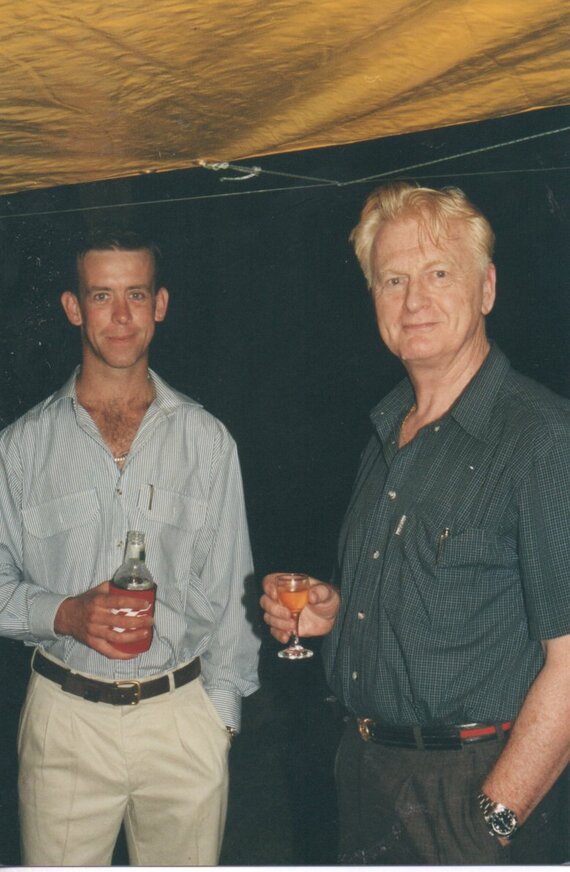 In the Ante Room
​?, Ben Scheelings. 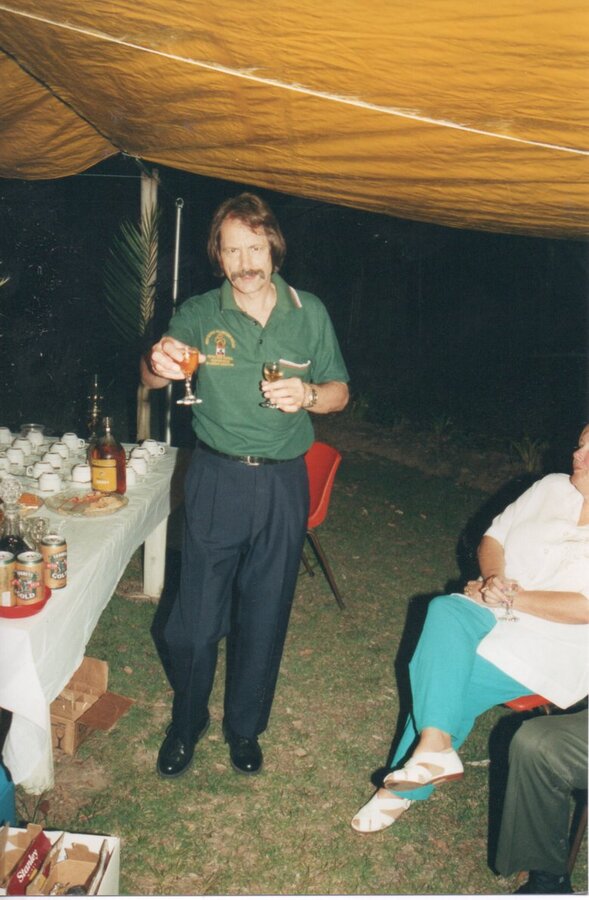 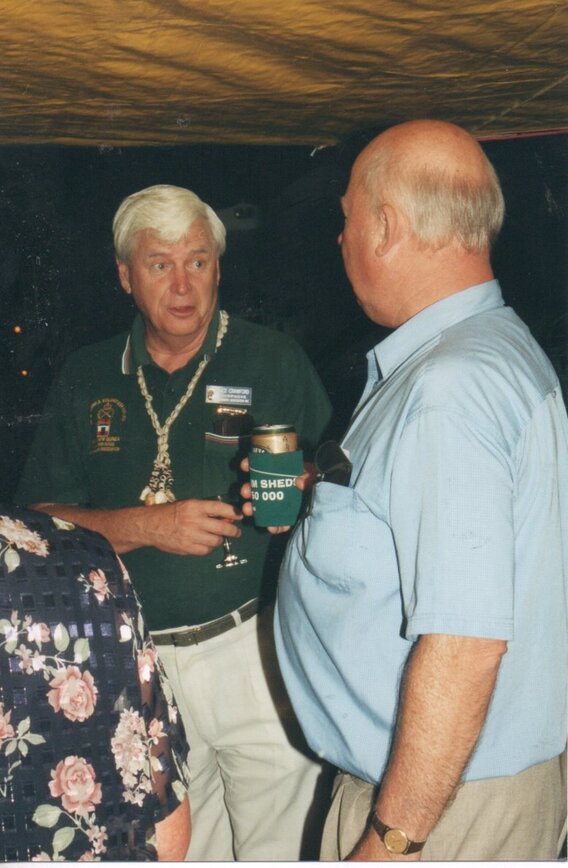 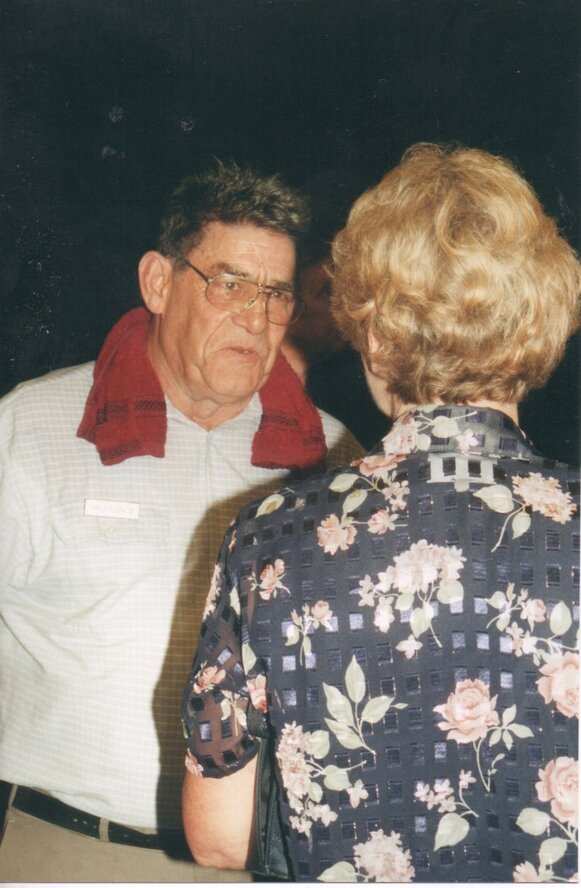 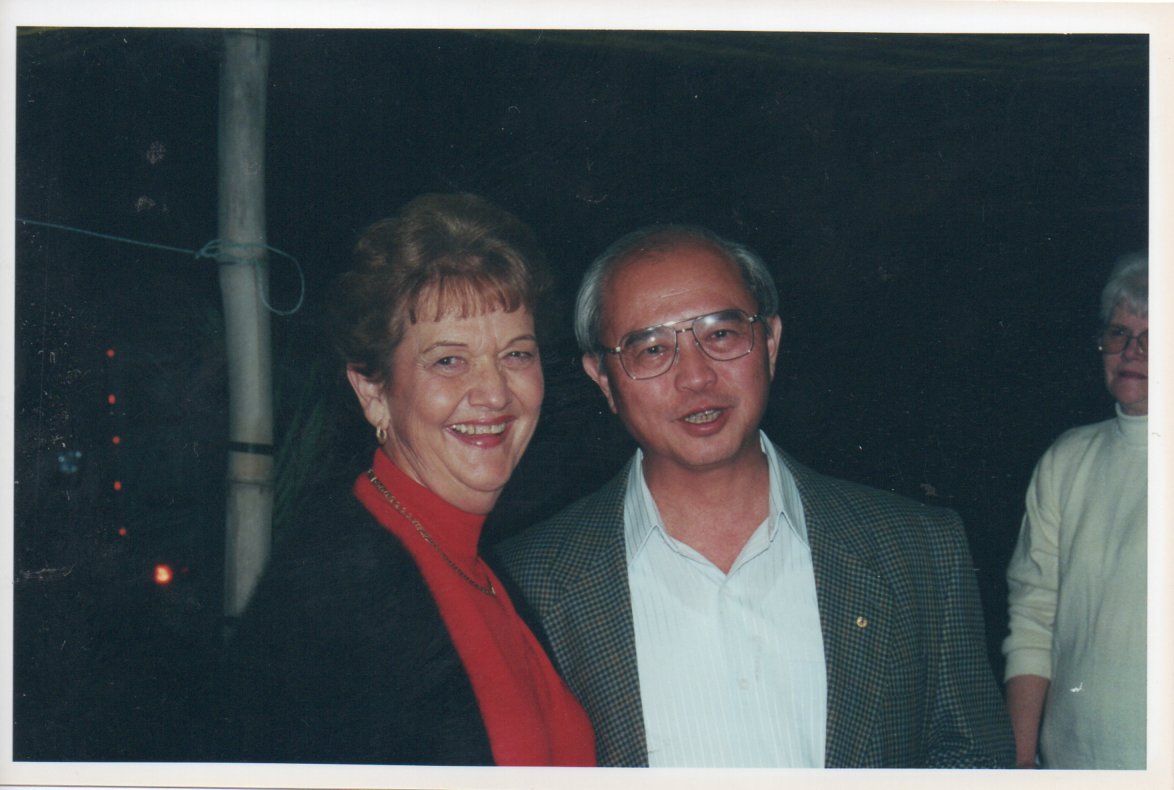 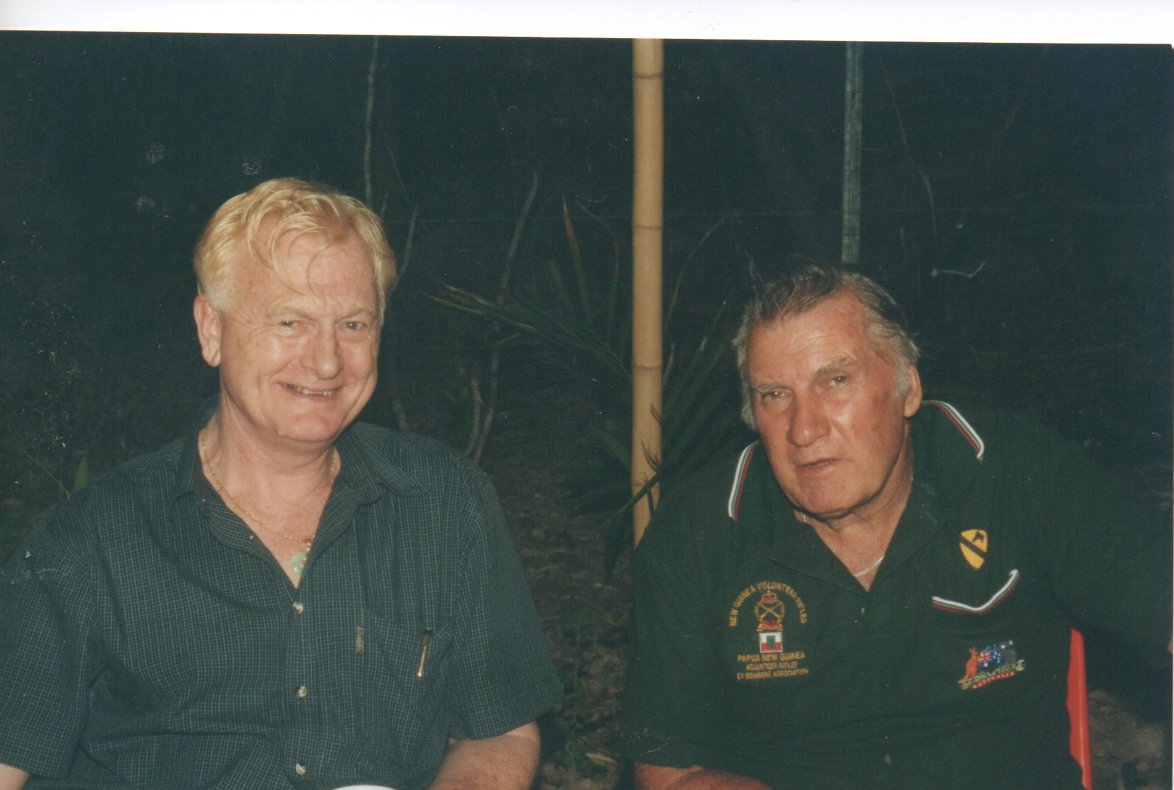 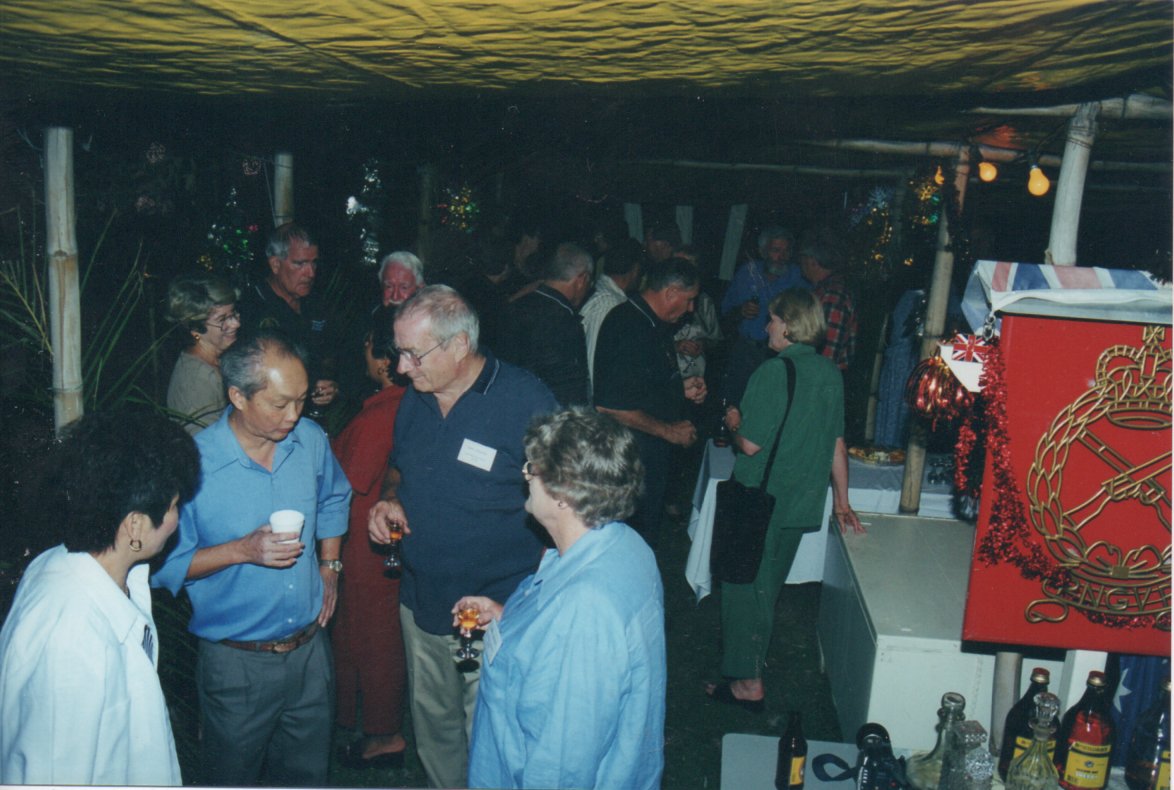 In the Ante Room prior to sitting down for the dinner 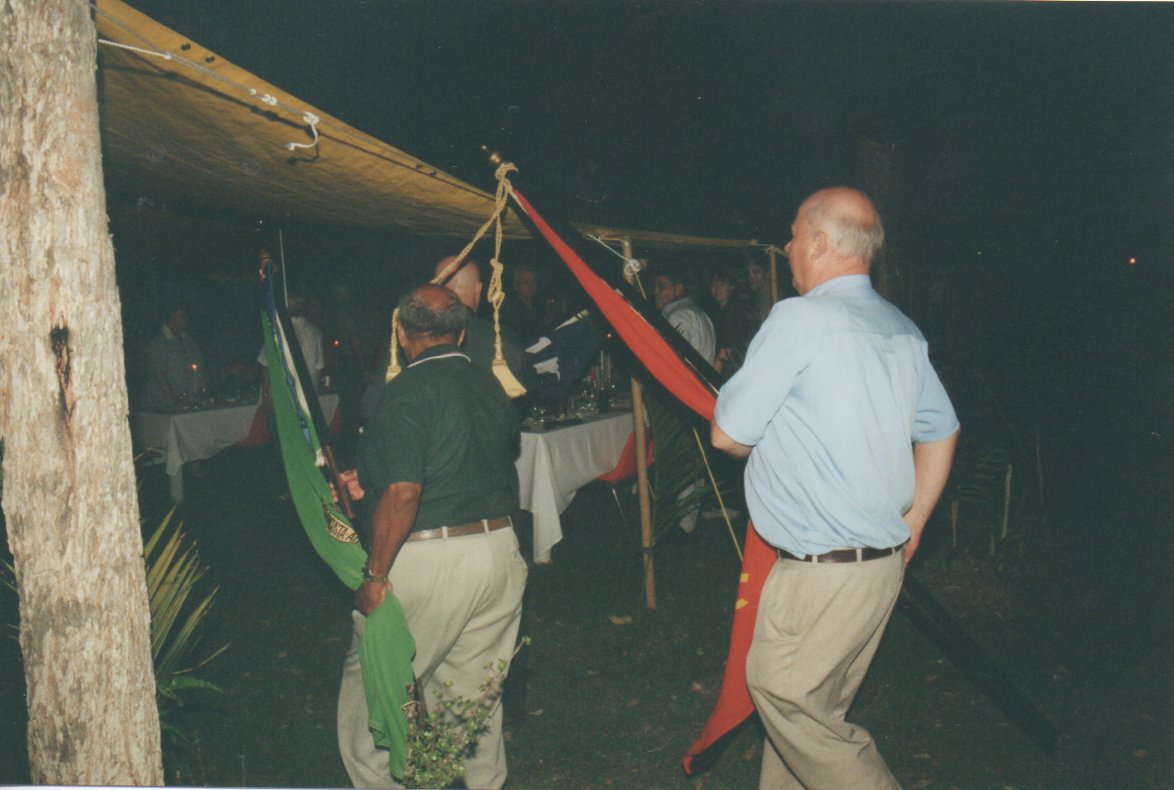 Rudy Buckley and Greg Shaw with the flags.   The flags were always marched in to the tune of the PNGVR march "Imperial Echoes" 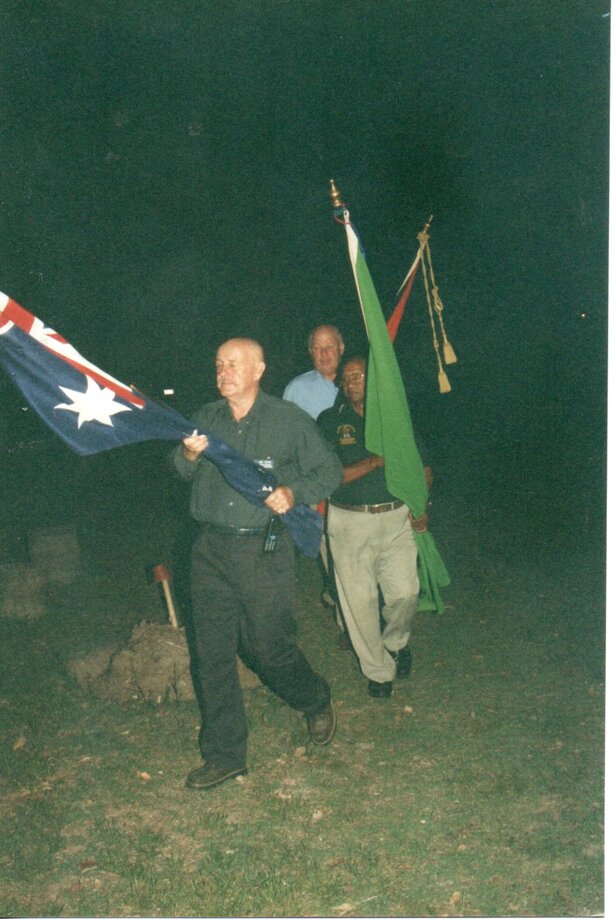 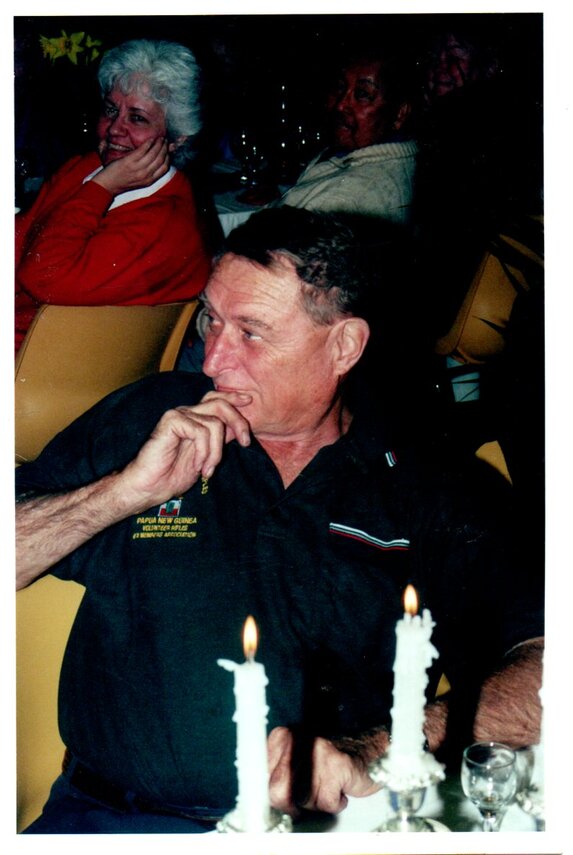 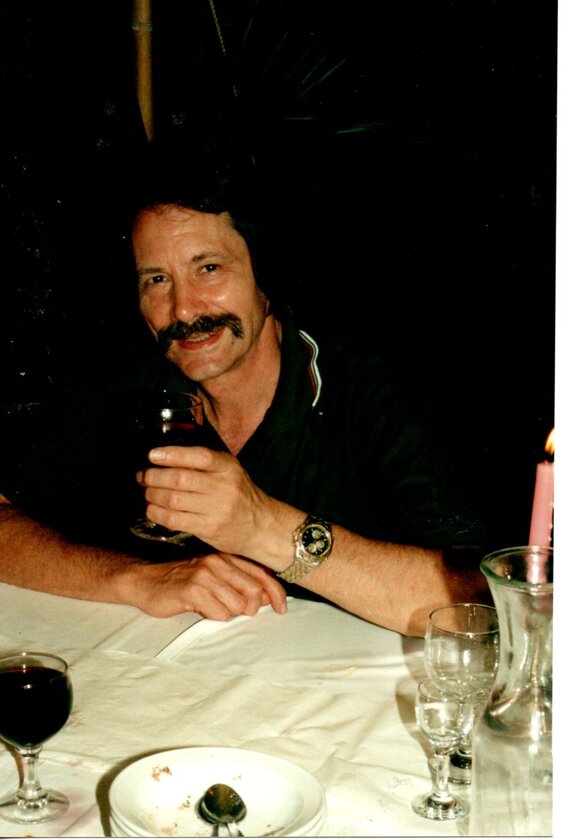 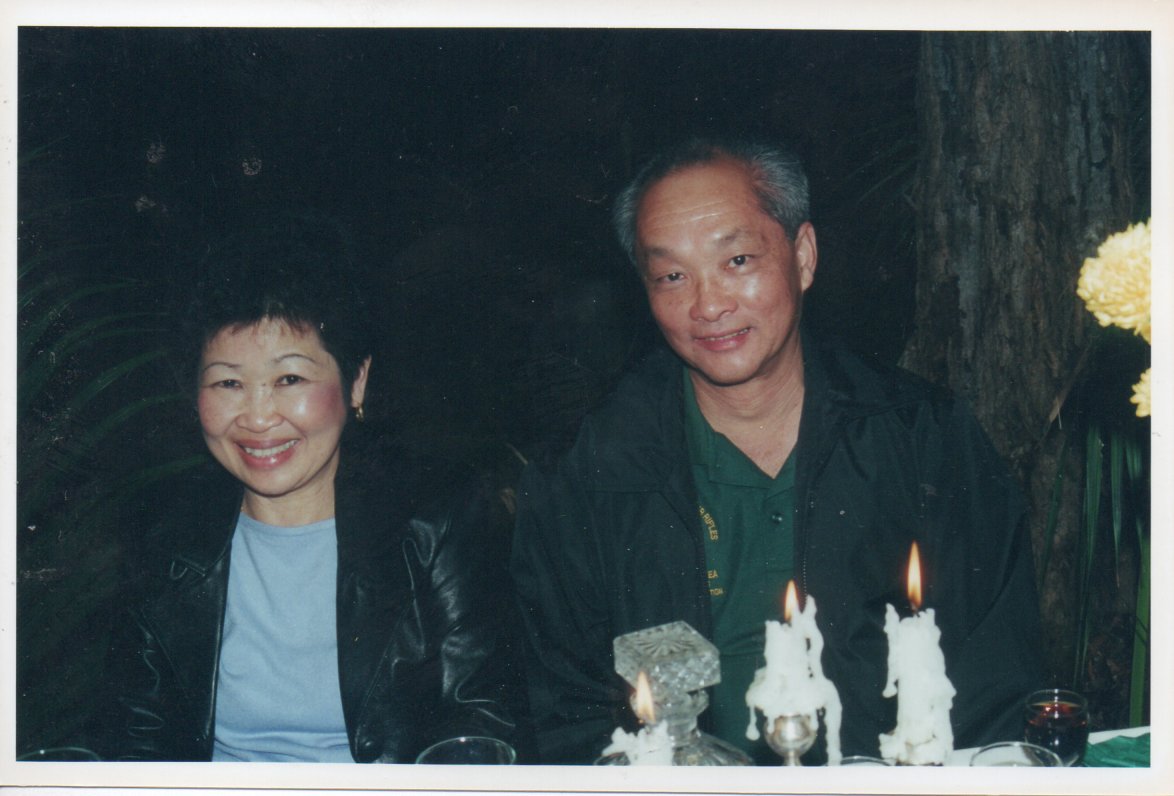 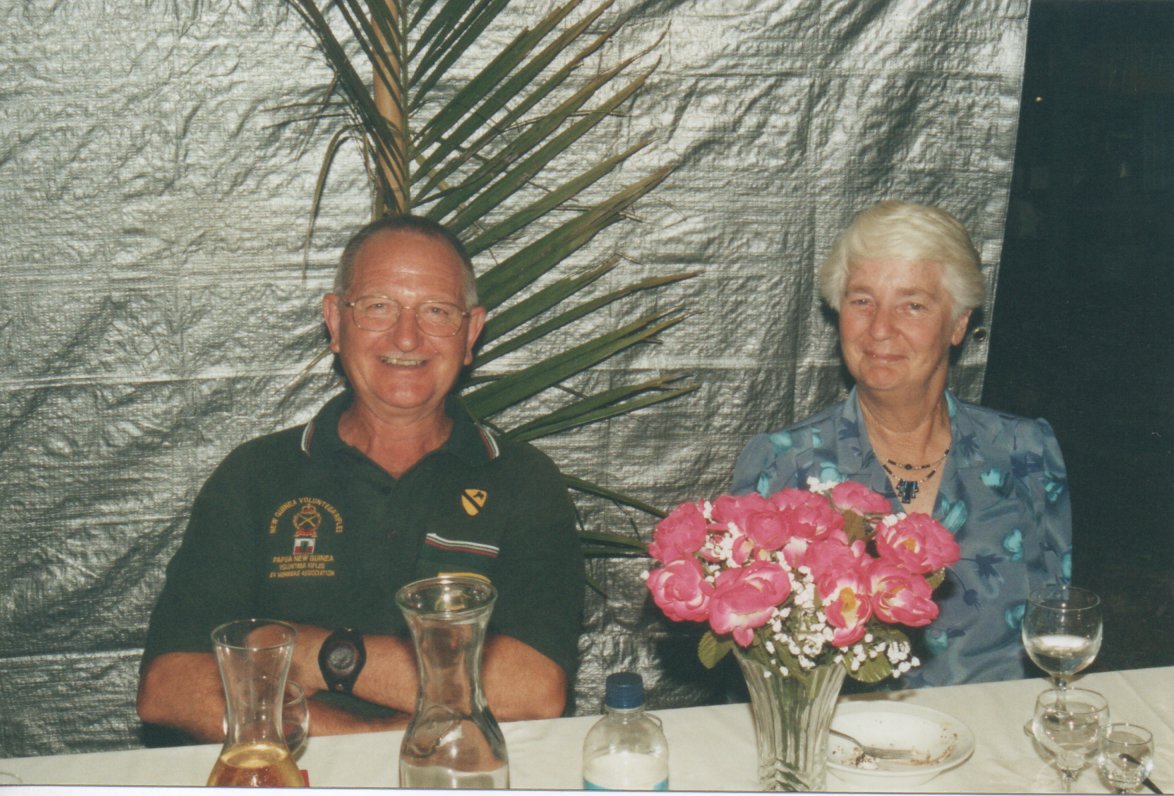 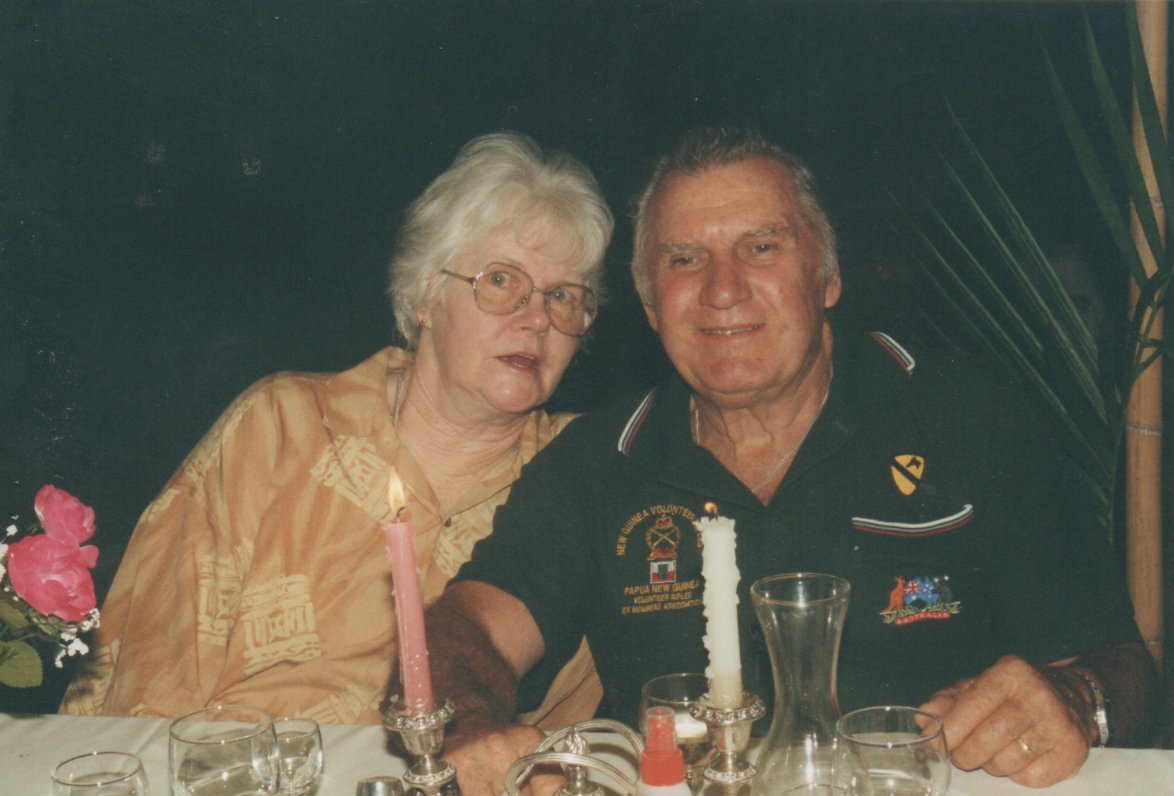 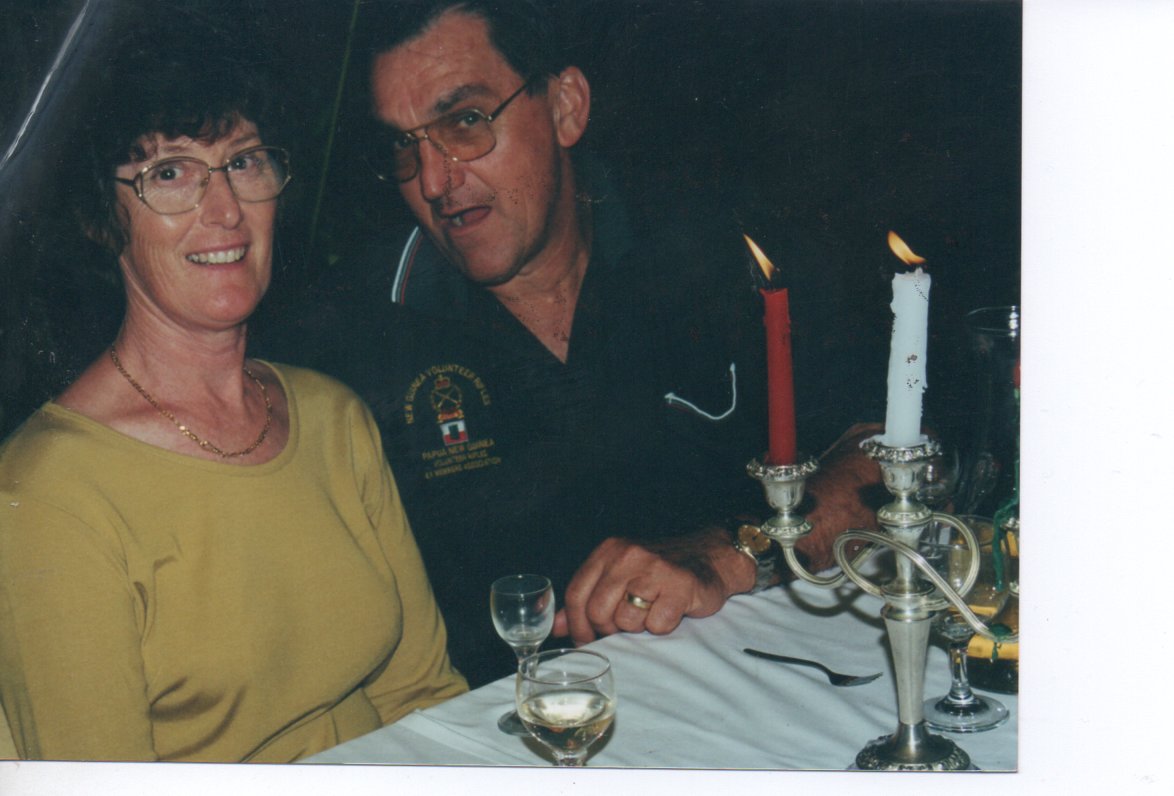 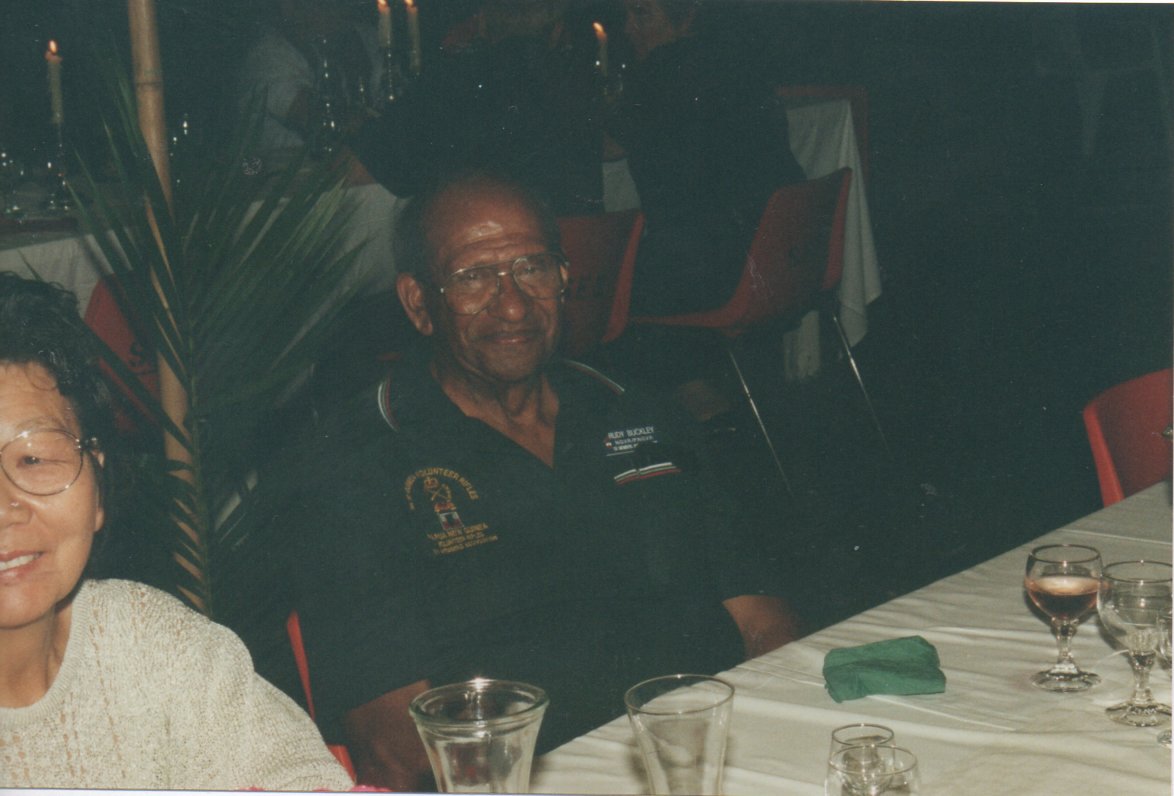 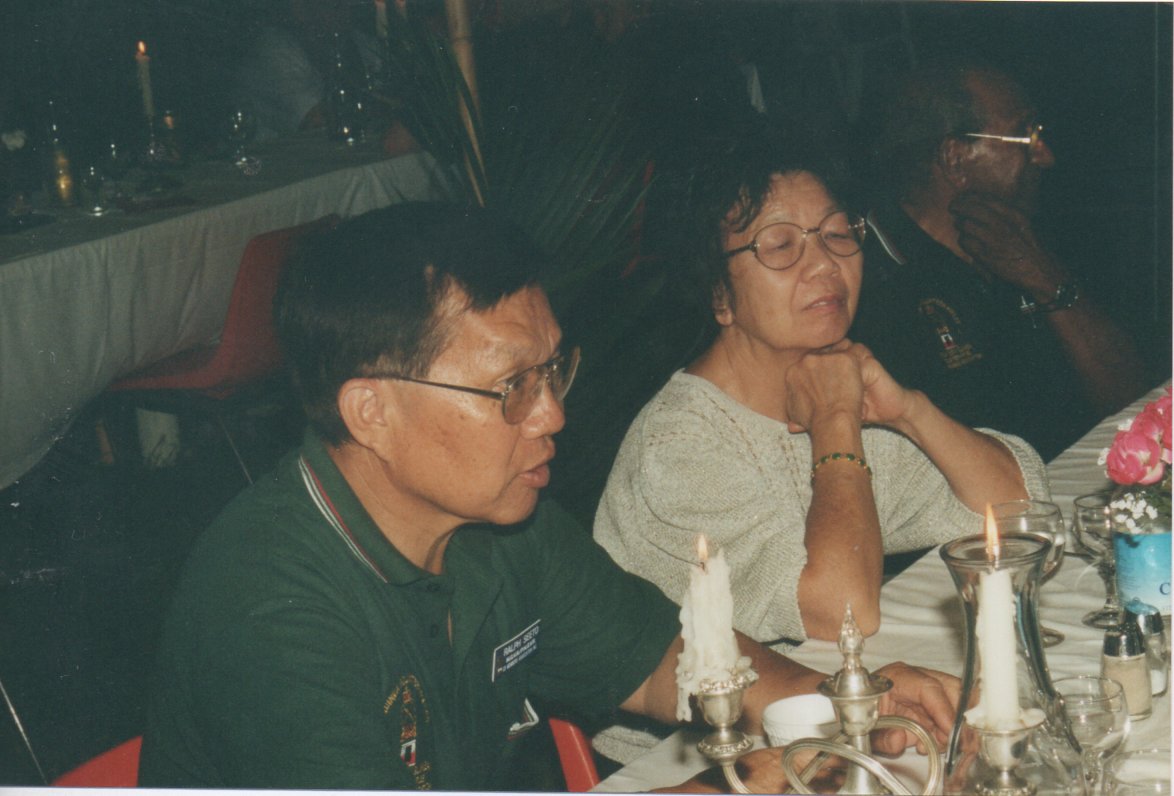 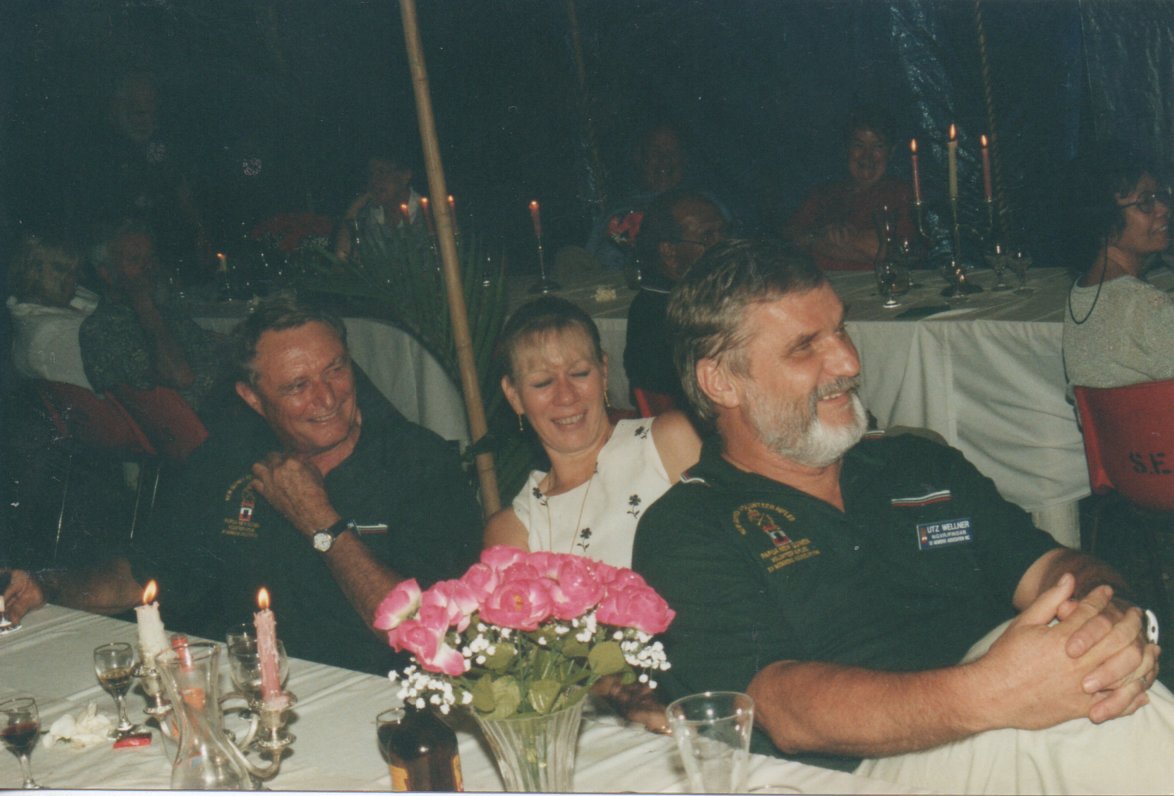 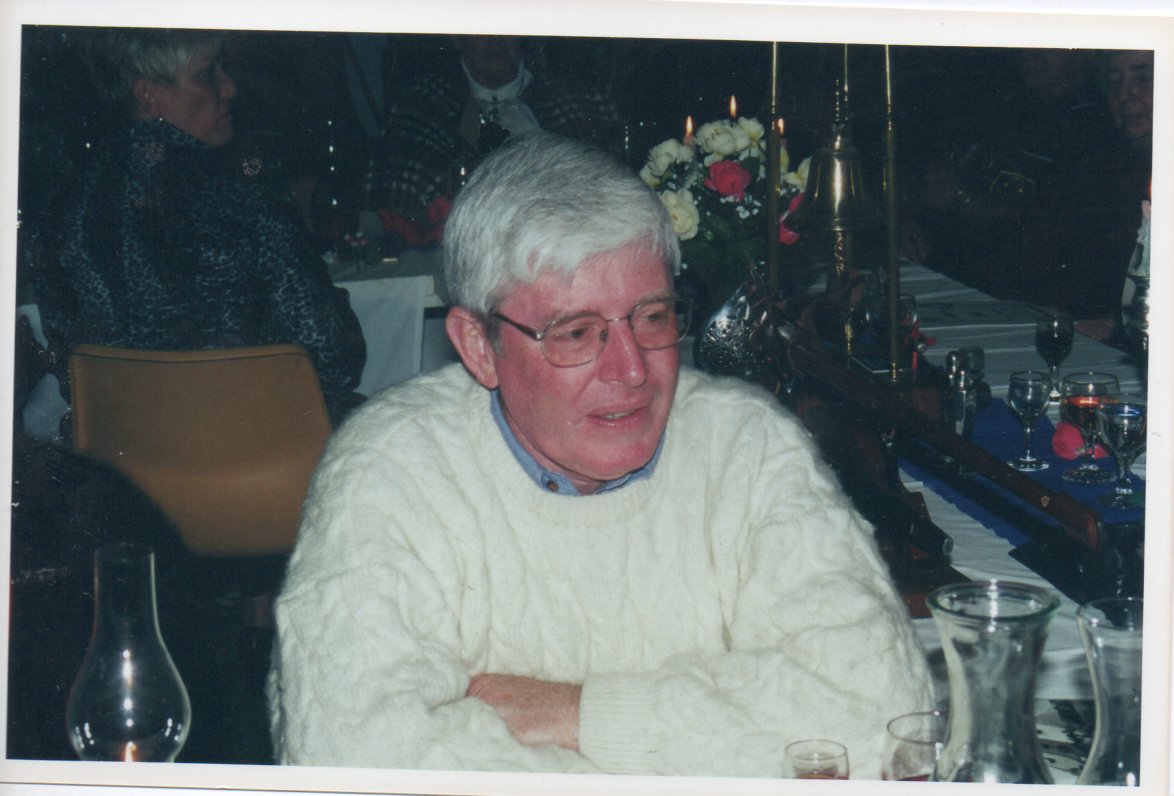 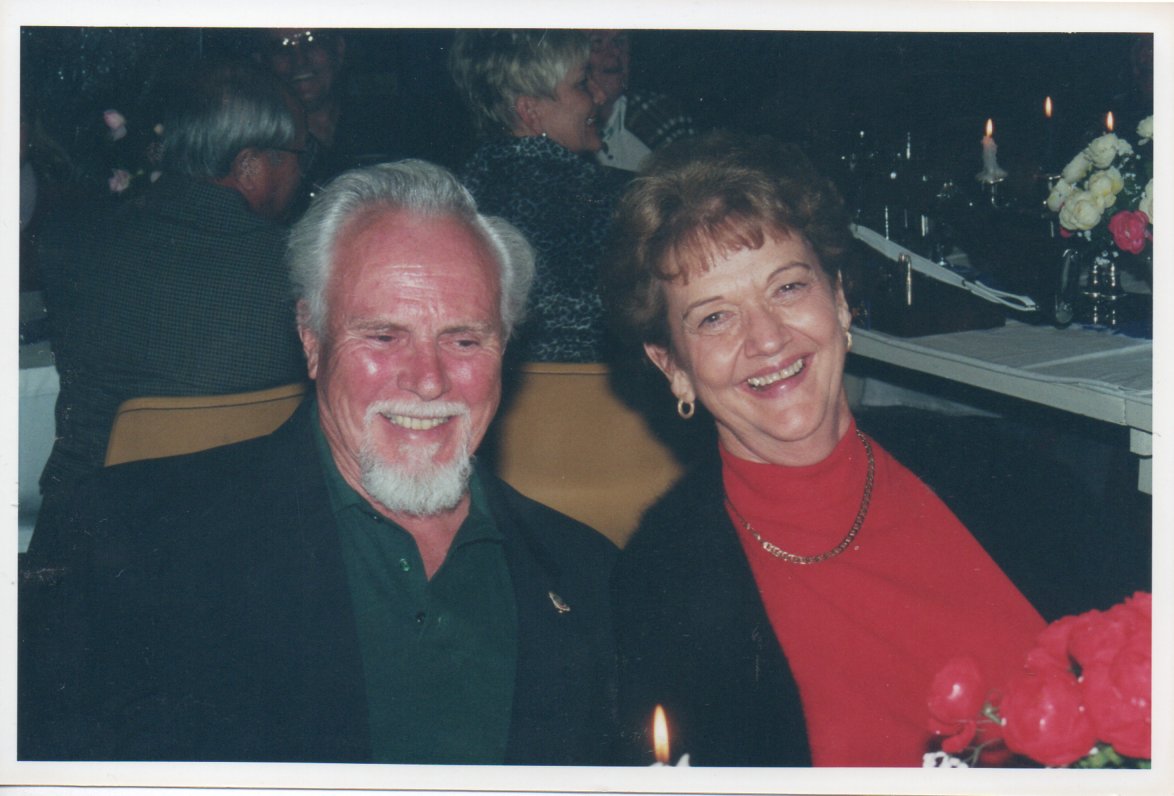 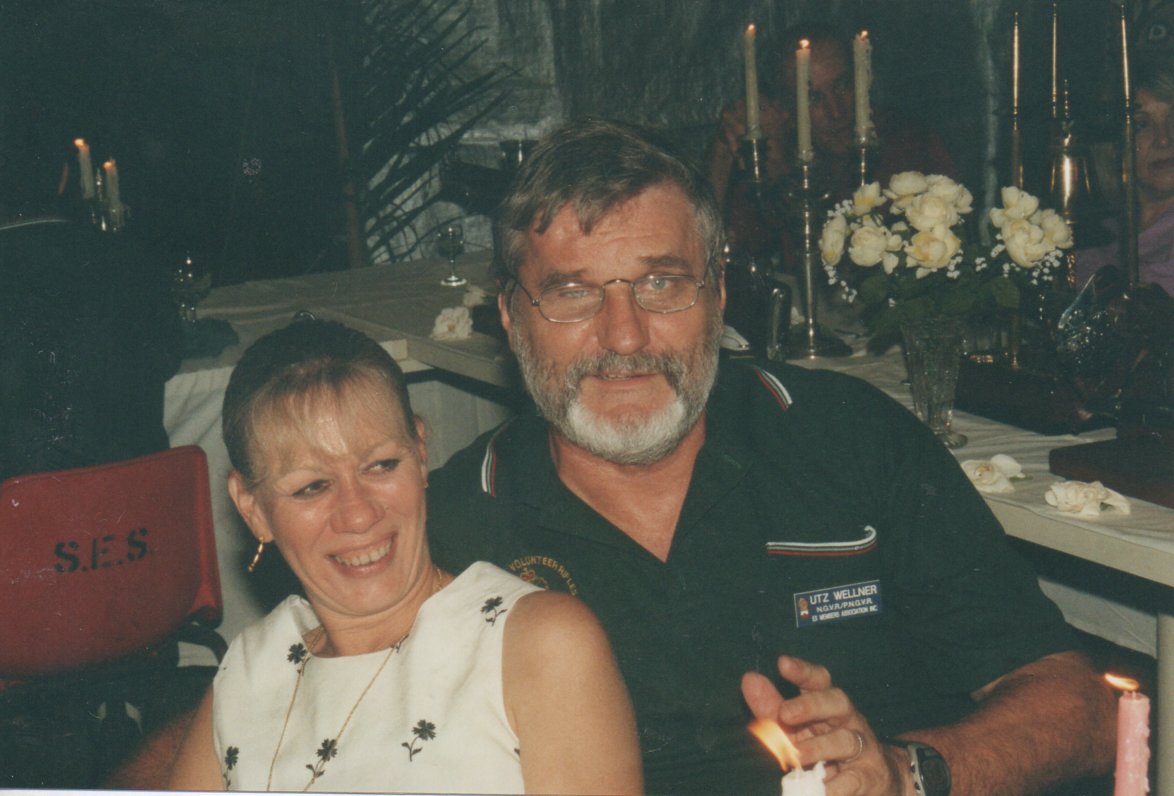 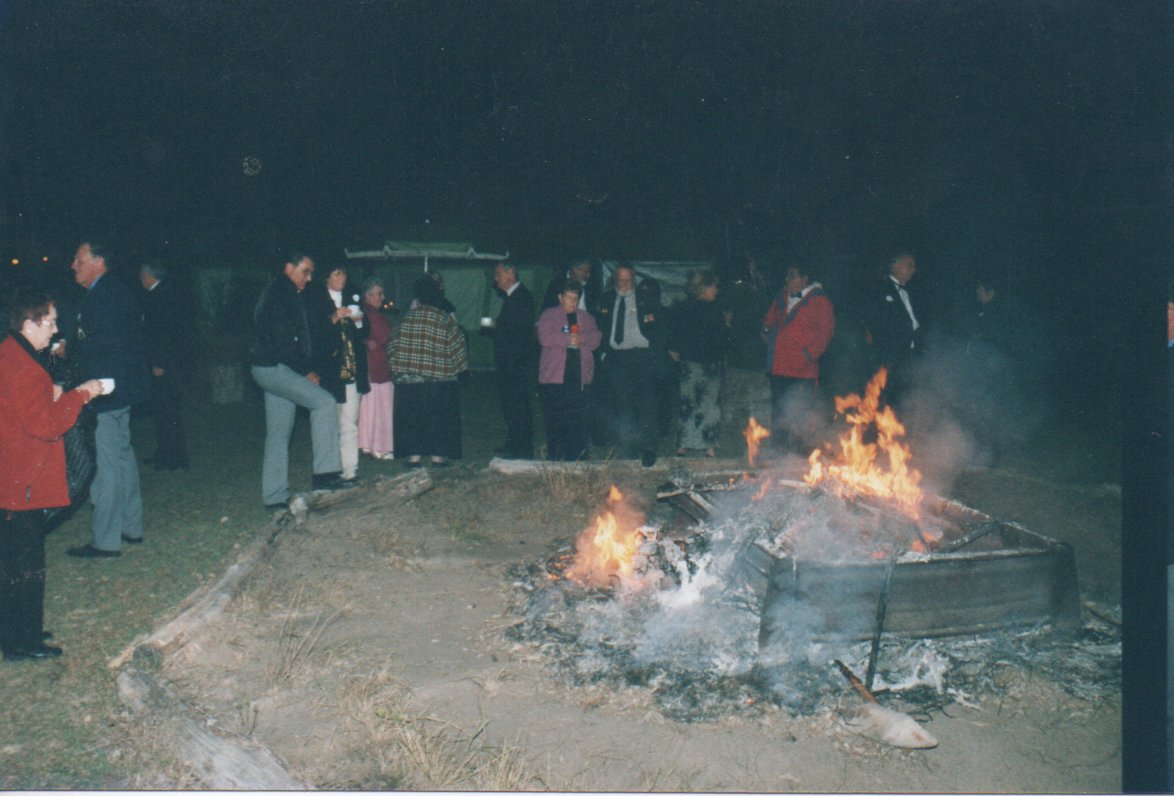 Above and Below.       The bonfire burns down after the dinner.
It was normal to have Tea and Coffee around the bonfire rather than at the table. 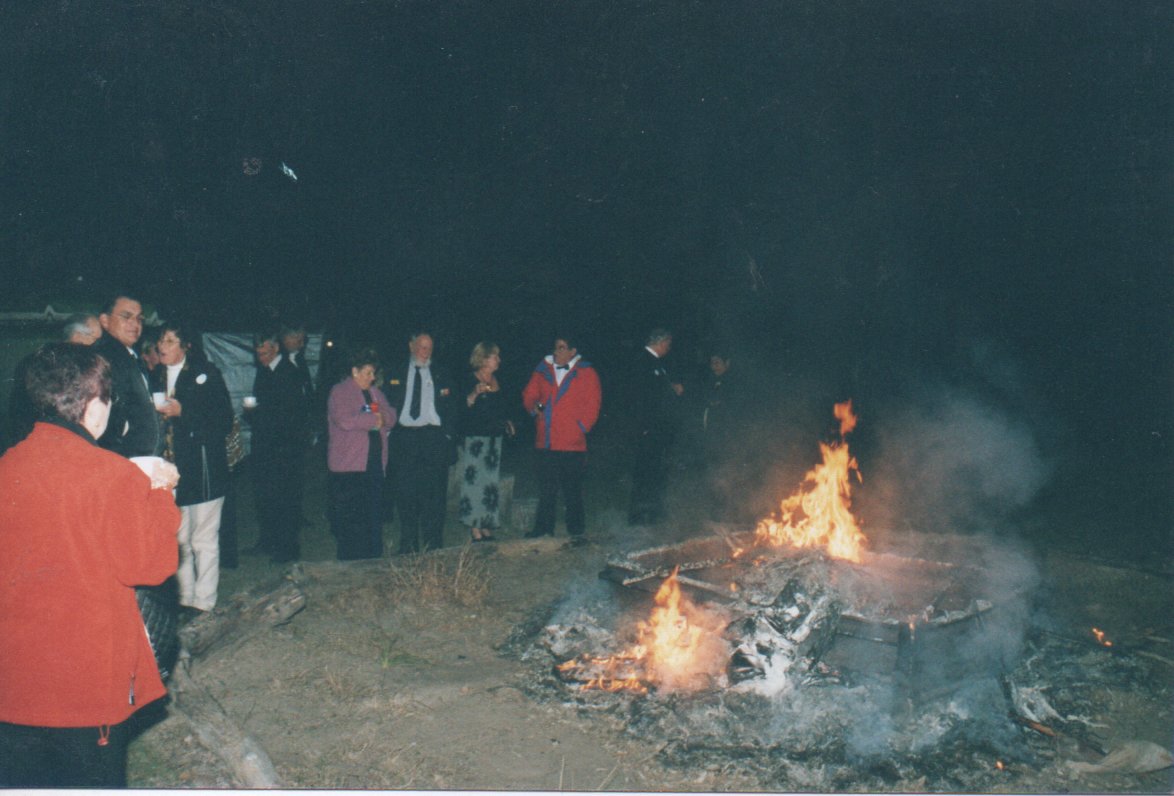