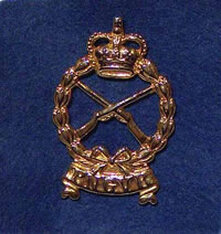 
Per Angusta Ad Augusta
Through Trails to Triumph


Although the formation of the unit was mooted earlier, PNGVR was not activated until 17 March 1951, when, under LTCOL N.P. Maddern, the first recruits were enlisted. These were mostly Australians, who had served in WW2.

The role of PNGVR was to maintain sub-units capable of providing information and advice on topography, native customs and personalities; guides and interpreters and assistance in the organisation and training of indigenous and irregular forces, if required.

The first CO was LTCOL N. R. McLeod who had returned to Australia prior to the activation and by the end of 1951 there were detachments at Port Moresby, Lae and Rabaul. The Honorary Colonel of the Regiment then was the Administrator, COL J. K. Murray. Eventually other detachments were raised in Wau, Samarai, Madang, Wewak, Goroka, Mt Hagen, Banz and Kainantu.  A platoon was raised in April 1970 at the University of Papua New Guinea.

By January 1963, PNGVR was a 200 strong all Australian force mainly of European background. It was not until 1964 that the strength became 400 when the unit became a multi-racial unit with the enlistment of Papua New Guineans and others. When PNGVR was disbanded on 1 December 1973, 80% of its members were Papua New Guineans.

As part of the training program, a two week annual camp was held, initially at Goldie River, then after integration in 1964, at Mt Ambra near Mt Hagen, and in later years near Lae. In 1962, PNGVR was presented with NGVR’s WW2 battle honours, Rabaul, Wau and South West Pacific. On 17 May 1969, the Administrator D O Hay presented the Queen’s and Regimental Colours to PNGVR at Igam Barracks, Lae.  2LT Pascal Idok of the UPNG platoon became the first Papua New Guinean to be commissioned in PNGVR in July 1971.

PNGVR’s last annual camp was held in August 1973 at  Finschhafen  when 350 soldiers from Port Moresby, Lae, Rabaul, Goroka, Banz, Mt Hagen, Madang  and Wewak attended. On 1 December 1973, PNGVR was disbanded. Its colours were  laid up at the Australian War Memorial on Anzac Day, 1974.

PNGVR was an  Australian CMF unit always commanded by a regular army officer. There were 13 commanding officers from 1950 to 1973. NGVR and PNGVR were the only Australian volunteer army reserve units which were formed, served and disbanded overseas.  They were at all times in the Australian Army Order of Battle, that is, they were front line units and were on continuous overseas service.

The difficulties experienced during the formation of PNGVR is told from the initial Commanding Officer's viewpoint in  “PNGVR – its formation 1951-1953.- See the file below.

Further information regarding the formation of PNGVR is told in the attachment below ‘History PNGVR 1953-1955 by LTCOL Young, the second Commanding Officer

There is a chapter about PNGVR in James Sinclair's book "To Find a Path", Volume 2.