Members and guests enjoyed another most successful Regimental Dinner at the Long Tan Sergeants Mess, with an elaborately laid table with silverware and wine glasses etc.

Pre-dinner sherry and finger nibbles preceded the piping in of the official party and flags. Guests enjoyed a menu of Pork & Asian Salad, Stuffed Chicken Breast with creamy garlic sauce, Grilled eye fillet steak with mushrooms and a rich red wine jus, with dessert of Pavlova with fresh fruit or Chocolate Mud cake, all supplemented with white and red table wine. Following a short comfort break, Port was laid on before the Kangaroo Court.
Mr Vice, Sgt Col Gould chaired the Court, with S/Sgt Barry Wright taking up the duties of ‘Bailiff’. In line with the recent GOLD Logies and GOLDEN Globe awards, this year's court adopted a GOLD award theme.

Mal Zimmermann, who was asked earlier in the year to “bring his drill equipment to a working bee” and who fronted up with the drill but no drill bits, was award the GOLDEN ‘pointie bit award’- ? Gold coloured mounted drill bit—to help remind him NOT to forget the drill bits at future working bees.

Doug Ng, who at a recent museum working bee, accidentally ran over an above ground mains pressure water pipe with his lawn mower resulting in a water fountain jet, was awarded the GOLD Stick—a gold painted forked stick for Doug to use for all future water finding missions instead of his lawn mower. Barry Wright also presented Doug with the original piece of cut water pipe mounted on a wooden base

Vice President John Mudge, whose recently mounted medals came apart during another function and fell to the ground, was presented with the GOLD Steel Bar award—a gold coloured length of flat steel of some 5 cm wide and 30 cm long, fitted with a solid neck chain on which to more securely court mount his medals. To better take the “weight" of responsibilities so to speak. 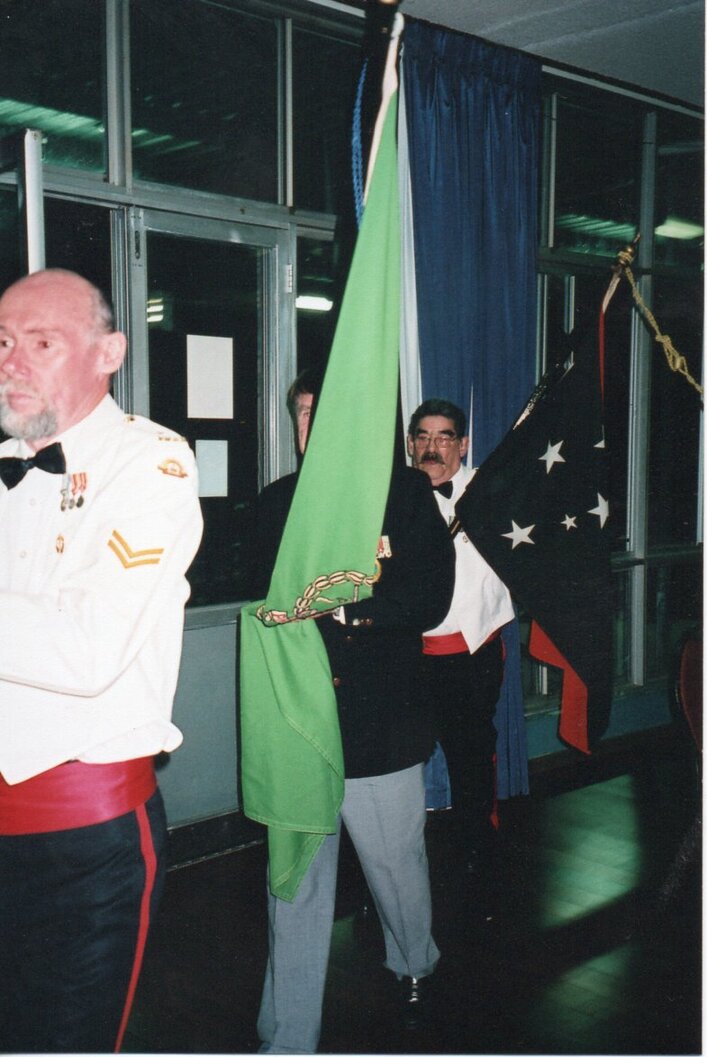 Paul Brown, ?, Bruce Inch prepare to march in the flags. 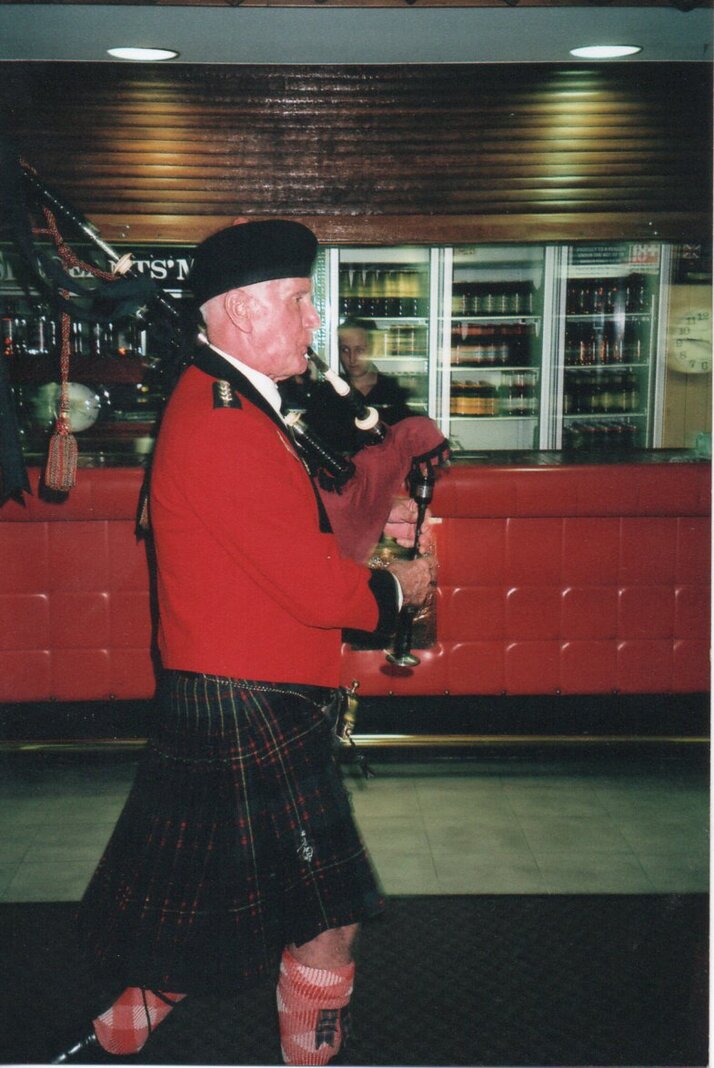 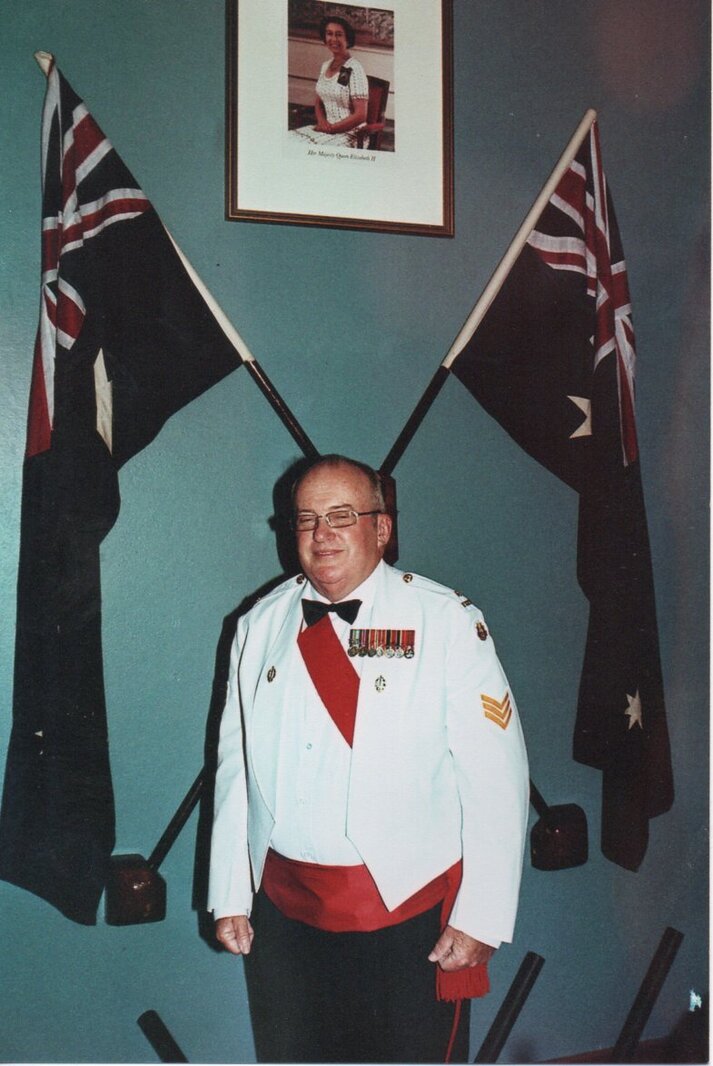 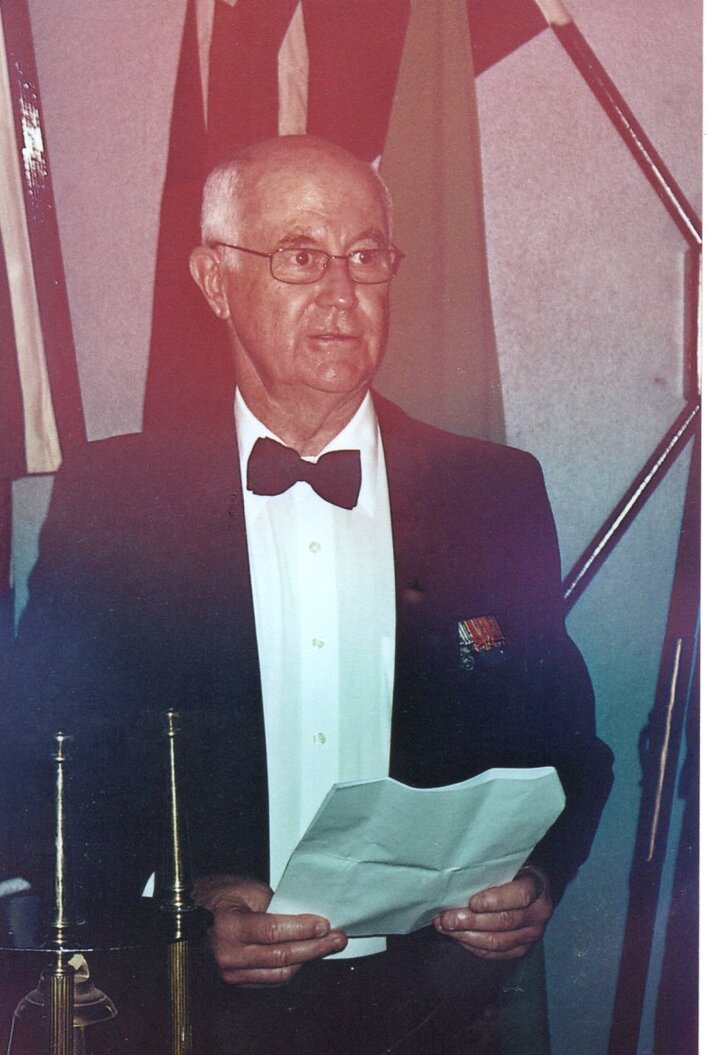 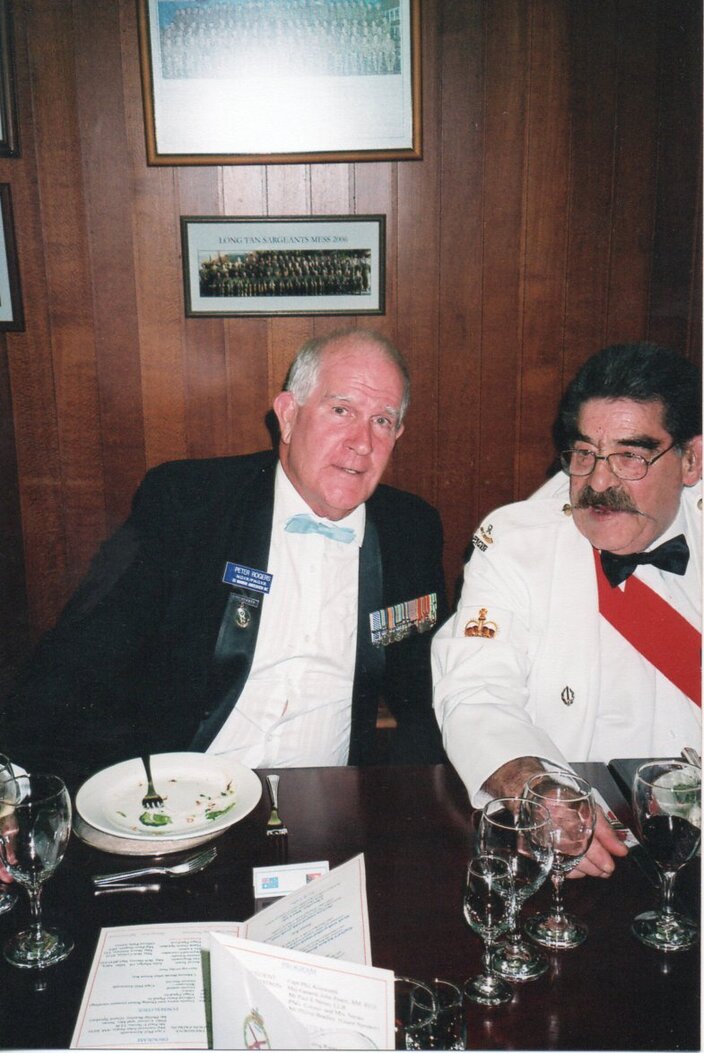 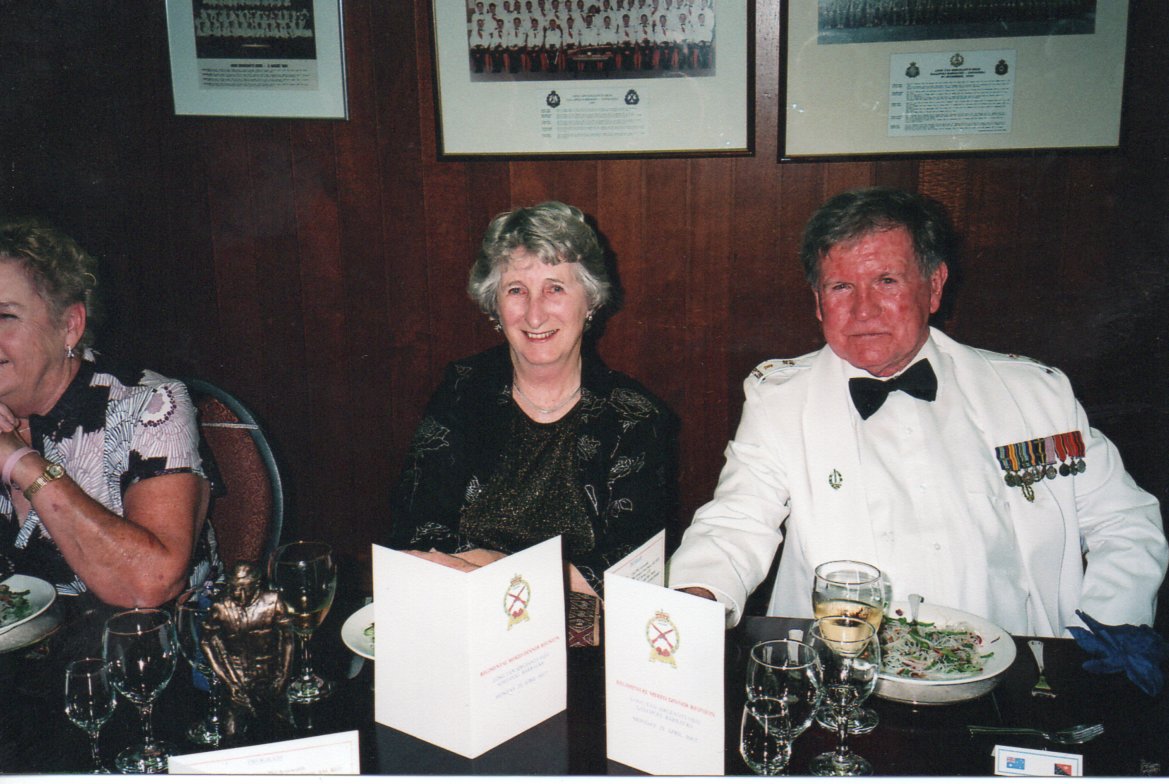 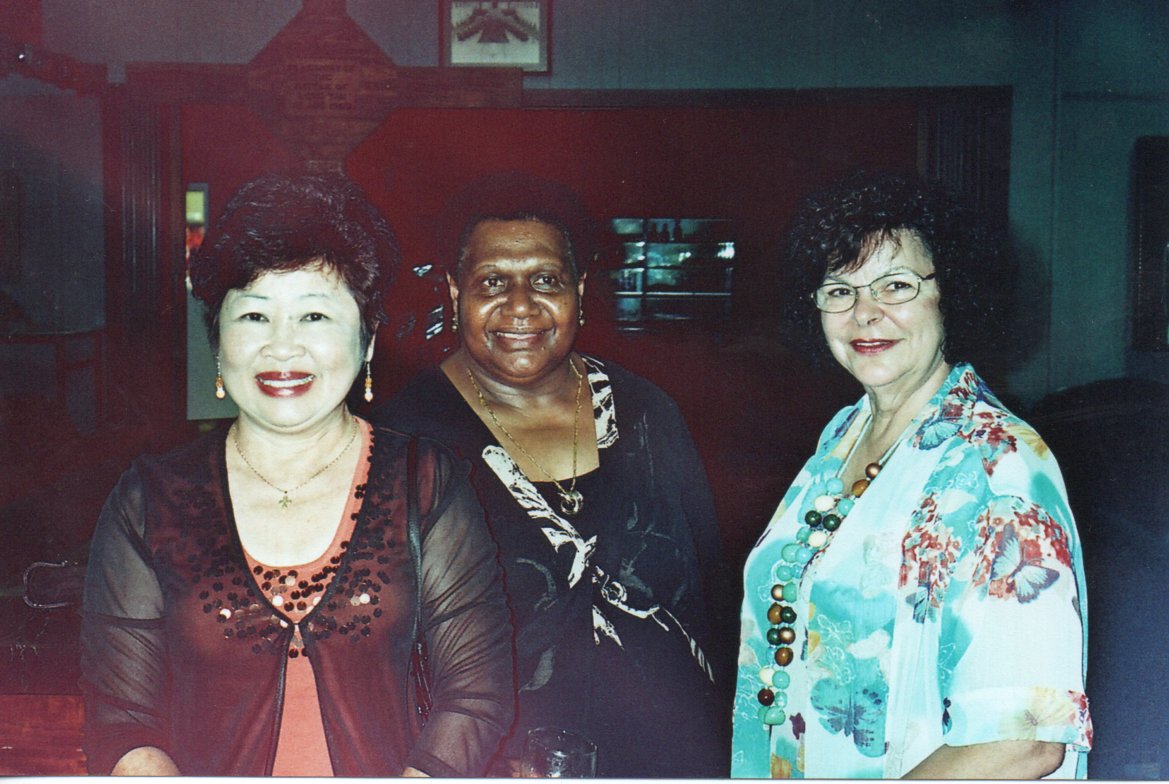 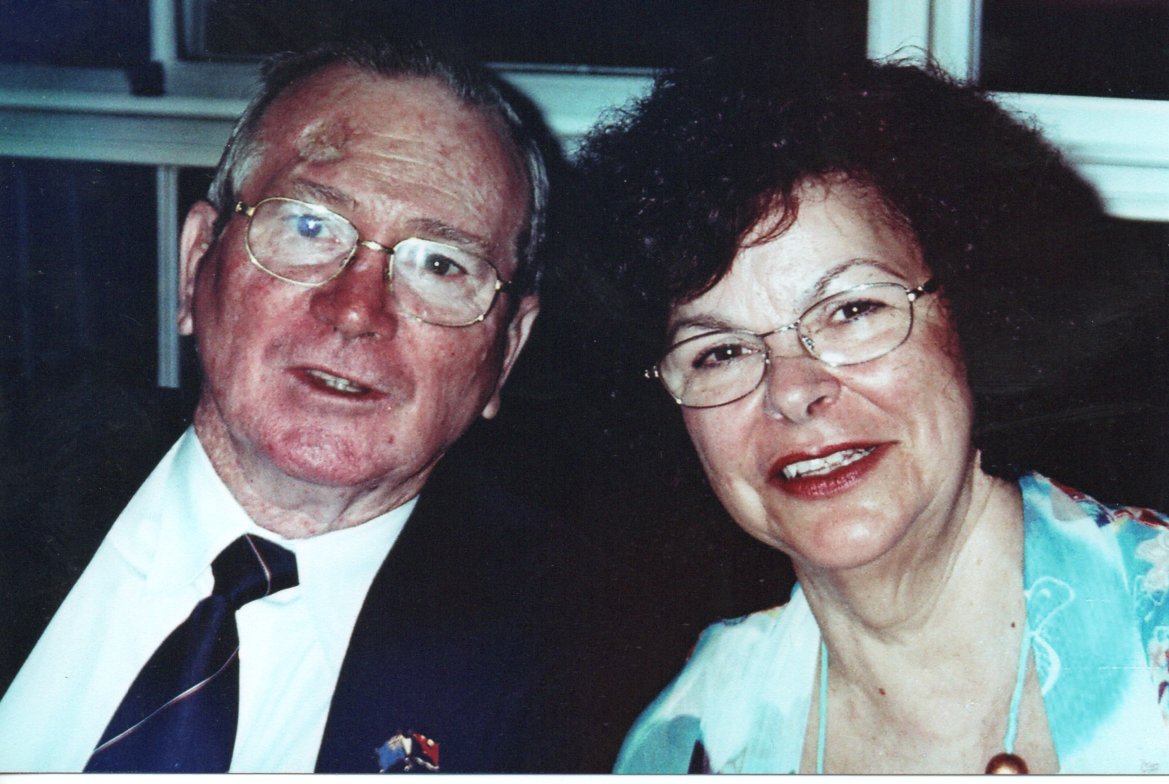 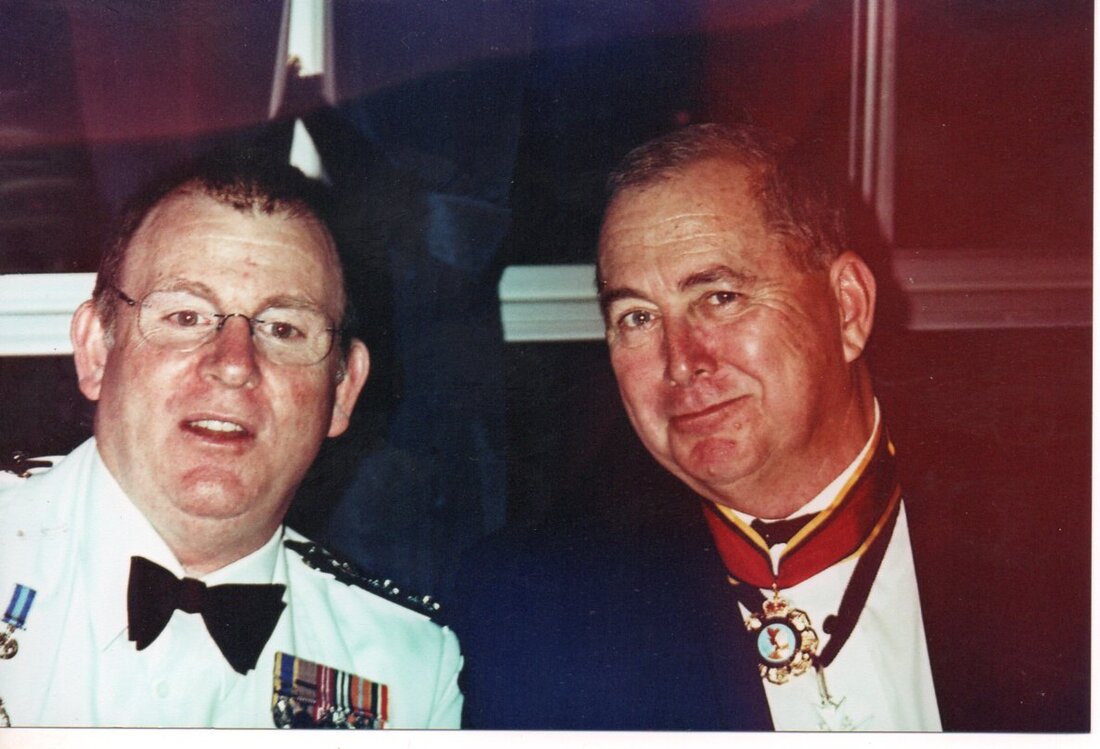 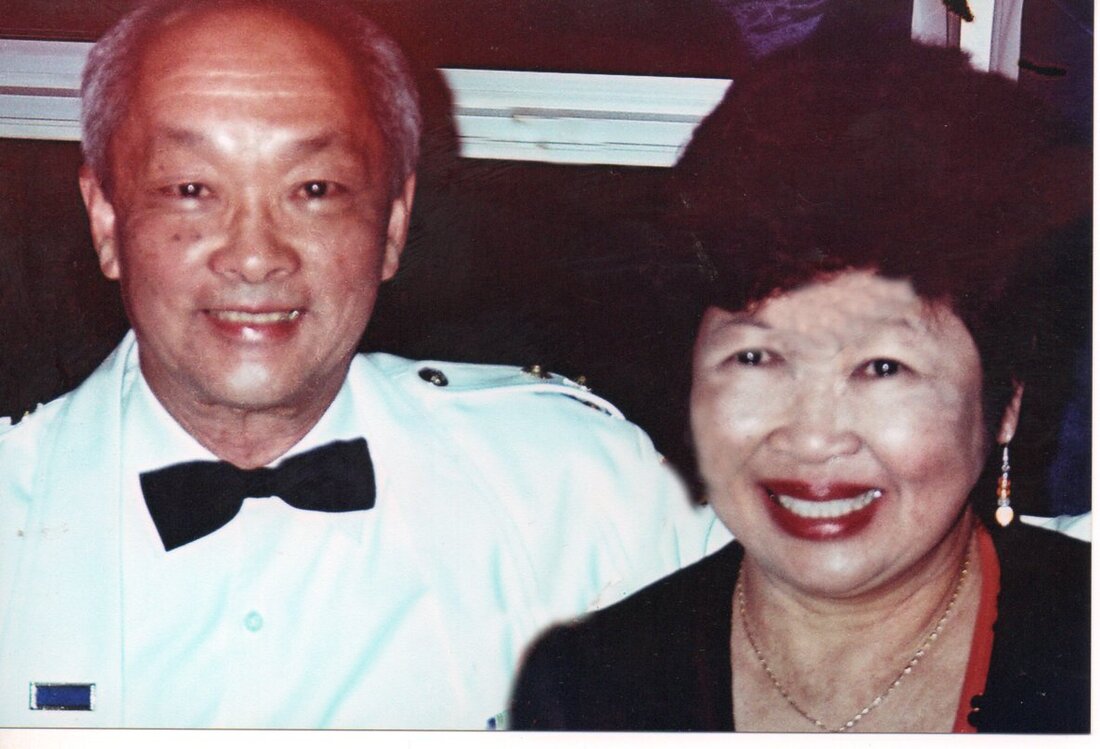 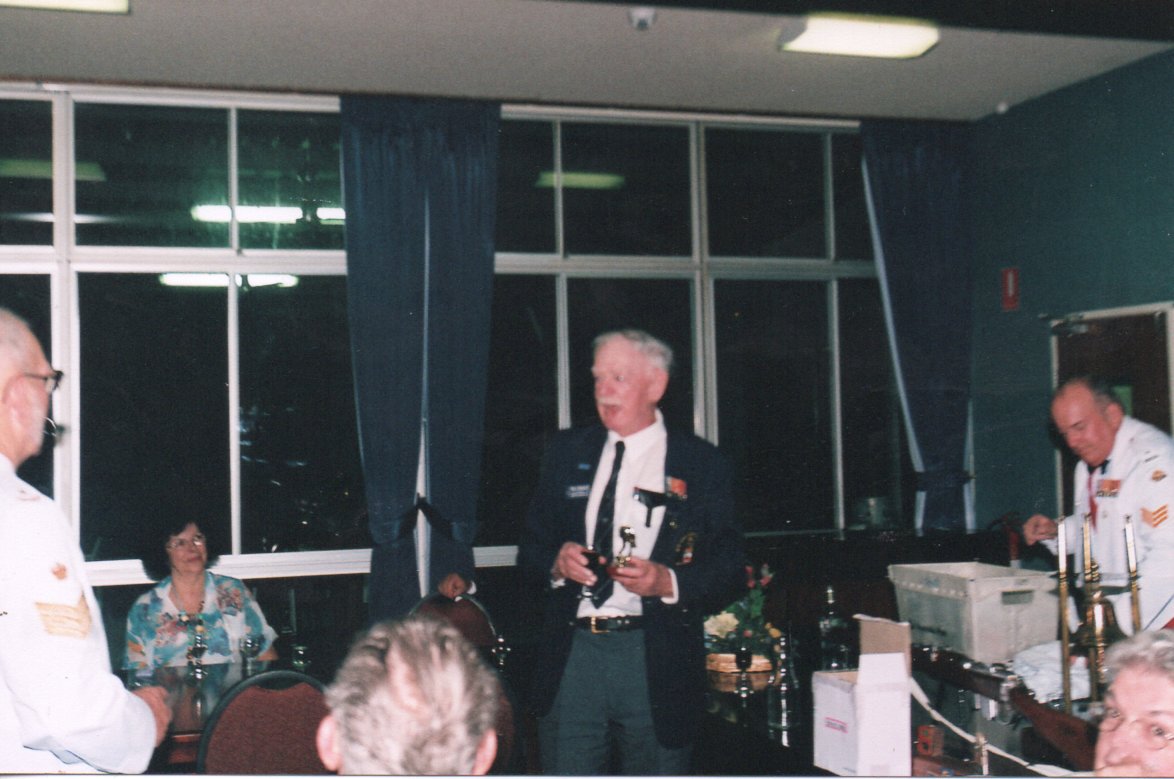 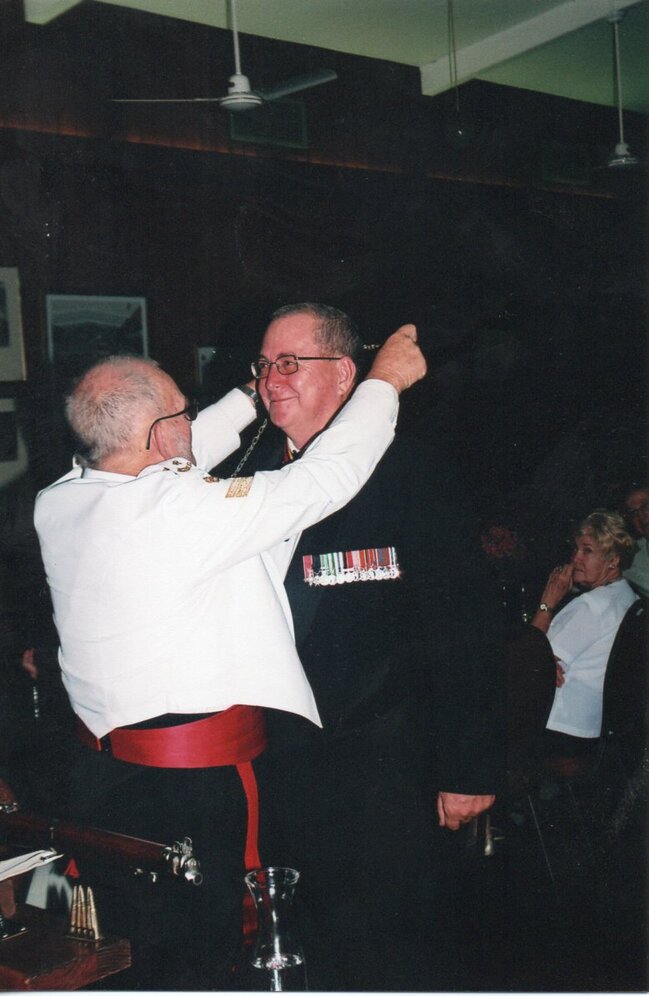 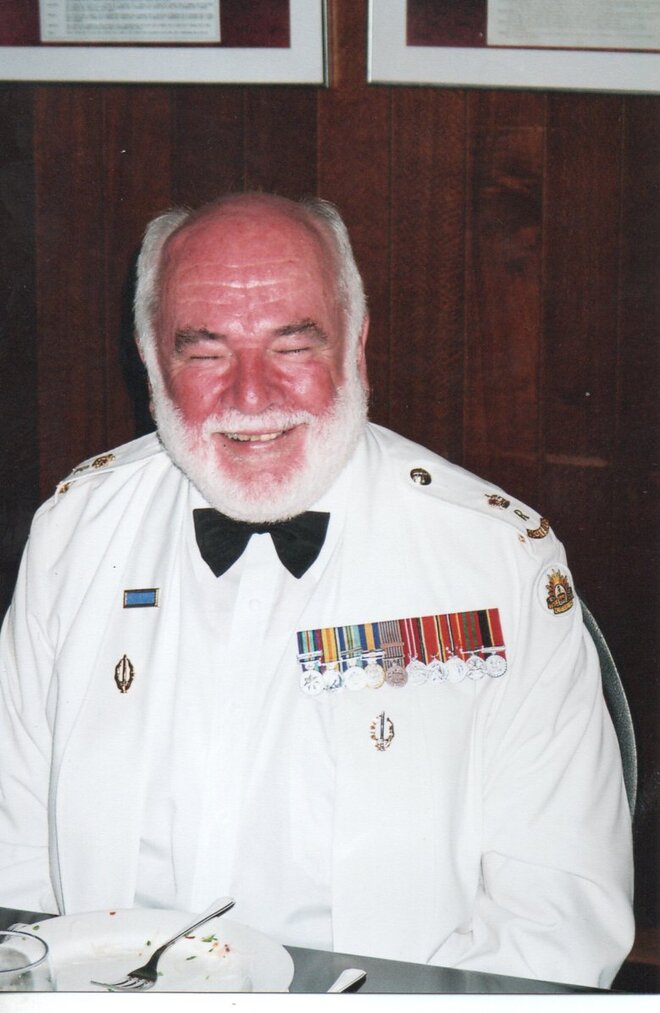 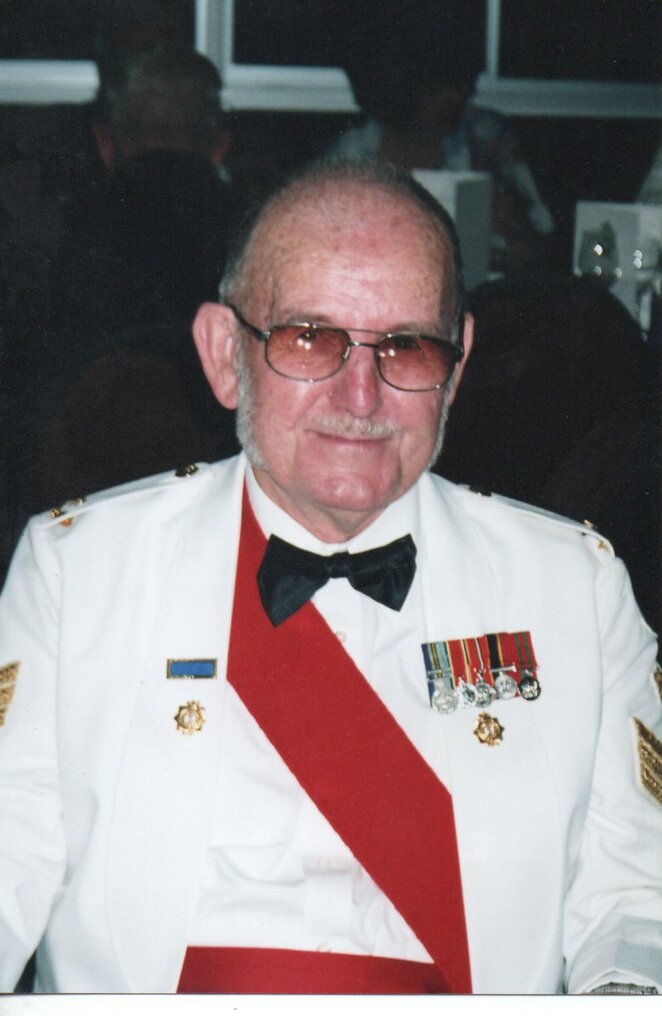 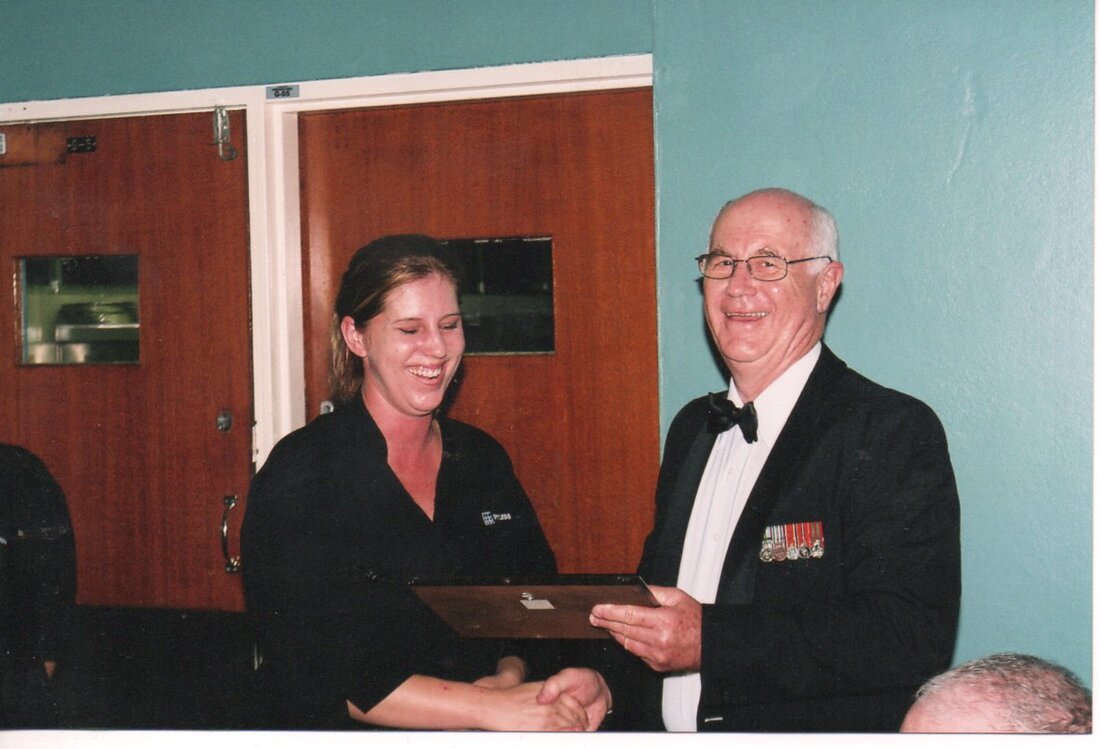 After the Dinner.   Dining President Phil Ainsworth presents an Association plaque to the Catering Supervisor.