Taim belong Masta.  This electronically downloadable book is accessible from ANU open research depository.
Reading this book may bring back many PNG memories and help you  fill  your isolation time over the coming weeks. The file is too big to be uploaded onto our website.  Click here to download it.

Ration Packs I Have Come Across, Trevor Connell, 2016.  Download the complete article (below) in full in greater detail and readability. This has featured in several parts in Harim Tok Tok

Download File
Keepers of the Gate - Bob Collins. This is not a history of NGVR. These are the stories of thirty-seven NGVR soldiers—stories which reveal why they were in New Guinea as civilians at that fateful time, their wartime and postwar experiences and the effect on them and their families.
The stories were written as told to Bob Collins, who served in PNGVR, the postwar CMF unit in Papua New Guinea. He met many ex-NGVR men and saw many areas where NGVR operated on the frontline. We are grateful to this small band of courageous and adventurous men, the Keepers of the Gate —our front line of the Pacific War —and these stories are a legacy these outstanding men deserve.
Use the Order Form below. 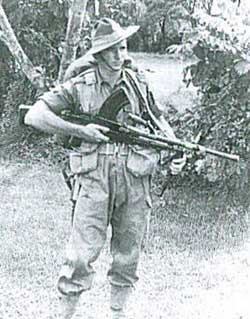 9. “Hostages to Freedom - the fall of Rabaul” by Peter Stone

14. Stories covering the war time experiences of some NGVR veterans - published in the Association’s “Harim Tok Tok” quarterly newsletter. These stories were written and edited as told to Bob Collins by the participants.

View film and other video here ...

22.  PNGVR Annual Camp at Lae.      During August and September of this year, the Papua New Guinea Volunteers went into camp near Lae for their annual 14 days of training. The unit, the Territory's C.M.F. force, was formed in 1951 and is made up of Australians, Papuans, New Guineans, Chinese and people of mixed-race. This year about 500 men from subunits in the main Territory centres - Port Moresby, Lae, Madang, Rabual, Wewak, Goroka and Mount Hagen - attended the Camp. They were flown into Lae in Civil airlines and RAAF Caribou Transports. The camp was held on the site of a wartime B.O.D. on the banks of the Bumbu River, close to the Finisterrre Ranges. During the first part of the camp, the troops brushed up on field craft and minor tactics, carried out range shoots with the self loading rifle (SLR), the 3.5 rocket launcher, the O.M.C. (Owen Machine Carbine). and threw grenades. As a special project, the assault pioneers rebuilt a suspension foot-bridge 170 ft long across the Bumbu River. The bridge which gives access to a Boy Scout camp, was washed away recently in a flash flood. The unit also received its first visit from the Commander PNG Command, Brigadier J.M. Hunter, who arrived in the Territory earlier this year and also from the PNGVR's new Honorary Colonel, Colonel R.R. Cole M.C. who is Commissioner of Police in Papua New Guinea. The culmination of the camp came in a three day counter-insurgency exercise involving the whole battalion. The part of the enemy was played by A Company from Lae whose members knew the area well and proved difficult to catch.  https://www.awm.gov.au/collection/C252525

26.  Listen to this rendition every Anzac Day. The way in which it is sung, gives it a lot of meaning.  And the Band Played Waltzing Matilda.  Listen to it here....
One comment on the song is...…
Halis ÖZTÜRK 2 years ago
Hello Australian friends. İ am from Turkey. This song very sad and very kindfull. Respect from Turkey. Yes we won this war but many brave man "lost" in here. And our greatest leader Mustafa Kemal ATATÜRK wrote a letter for parents and families: "Those heroes that shed their blood and lost their lives... You are now lying in the soil of a friendly country. Therefore rest in peace. There is no difference between the Johnnies and the Mehmets to us where they lie side by side now here in this country of ours... you, the mothers, who sent their sons from faraway countries wipe away your tears; your sons are now lying in our bosom and are in peace. After having lost their lives on this land. They have become our sons as well." This words maybe a little drop for peoples but it means a lot of things for us. Your grandfathers and our grandfathers still "sleeping" together in the our fields. Because we don’t say "they are dead" we say "They are last heroic martyrs".

Come and see their monuments on the ÇANAKKALE (Gallipoli) You are welcome... "After having lost their lives on this land. They have become our sons as well."

27.  Film.  Patrol over the Kokoda Trail by men of the Papua New Guinea Volunteer Rifles (PNGVR) around Christmas 1962. A bivouac with 'A' Company PNGVR at Lae. The 1963 Lae Show which featured a display by the PNGVR. A Cockshell band at Lae Mission. An Anzac Day parade through Port Moresby which featured the Pacific Islands Regiment, a Squadron of the Special Air Service Regiment and the PNGVR. Shots of an Air Show at 6 Mile Airport, Port Moresby. Scenes of 'A' Coy PNGVR. A trip to Madang includes a visit to the Coastwatchers Memorial.  https://www.awm.gov.au/collection/C217948