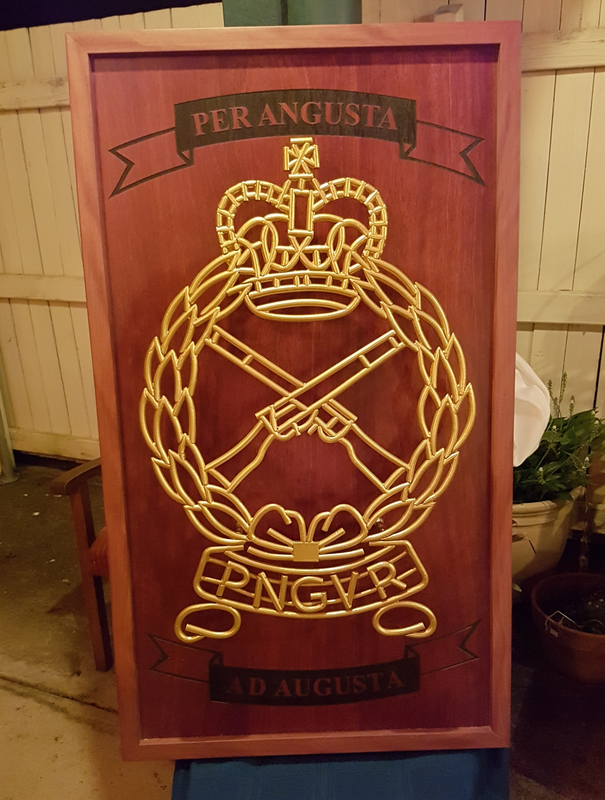 The Story behind the Crest Coming From the Old PNGVR Depot, Mt Hagen, to Australia

HTT Vol 101 carried the story of the restored PNGVR badge being presented by Leigh Eastwood to the Association for display in the Museum.        Alistair Martin, who at the time was retired in Poona, Qld, tells how the journey occurred....

While I was living in Brisbane I used to participate in the Field Dining nights on a regular basis, and thought that the Crest be better displayed at that venue, so I took it along to one night and offered it for display on permanent loan basis pending a decision as to its final home. Now, Field Dining nights are just a memory and I was overjoyed to see the article in the last HTT Vol 101 that Leigh Eastwood has had the Crest fully restored and handed over to the Association and I hope it graces the Military Museum for years to come. HTT Vol 101 carried the story of the restored PNGVR badge being presented by Leigh Eastwood to the Association for display in the Museum. Alistair Martin, now retired in Poona, Qld, tells how the journey occurred.

I was the Assistant Branch Manager of Ela Motors, Lae. At that time Leigh Eastwood was also with Ela Motors Lae as Compound Supervisor and as such was responsible for all the work involved in getting shipments of new vehicles off the wharf, cleared through Customs, transported to the security compound, pre delivery inspections, and eventual cleaning and detailing of the vehicle for delivery to the Showroom ready for sale. Shortly after Independence I was advised I was being transferred to Mt Hagen to take up the post of Manager there as Kala Motors, the then Toyota dealer for Mt Hagen, had agreed to a sale to Ela Motors. I arrived in Mt Hagen a month or so before the actual transfer so that I had time to get a feel of both Mt Hagen, and the business environment. I must say I loved Mt Hagen, the climate was cool enough to have a fire at night, the markets held a wide range of “English” style vegetables, even strawberries from time to time, and with a coffee flush under way, sales were booming.

Those of you might remember that Kala/Ela Motors was situated at the then entrance of Mt Hagen and was next door to the Police Barracks. The complex was quite large and reasonably self sufficient. The actual block had an access road to one side of it, the larger area had a Forecourt, the main building of sales, spare parts, showroom, a lube bay at one end, and management offices etc on the upper story. At the rear of the building were the workshops, panel shop, auto electrician, tow truck, and a light fabrication area for bull bars and alike. The smaller area had the compound for storage of new vehicles and the CIG Gas depot. To the rear was the expat staff housing and apprentice quarters all surrounded by security fence. Behind this, in a separate security compound, were the local staff quarters.

Some months after I arrived in Mt Hagen, the Aus Govt, as part of Aid Funding, decided to assist in raising a new Police Riot Squad in Mt Hagen, and to help get the training under way they sent an Australian Army Major, Kevin Lunny, who has previously been with SASR, to supervise the training. I met up with Kevin at Mt Hagen’s favourite watering hole, the Hagen Park Motel which at the time was run by one of the characters of PNG Mr Barry Walker, AKA the “Phantom”. Kevin and I got on very well, particularly after he found out my background of Regular Army, Malaysia, Vietnam and PNGVR. I used to assist in range practice with the RPNGC. That was lots of fun as the Riot Squad Constables were not that confident with the M-16 and tended to aim at the target, close both eyes and jerk, rather than squeeze, the trigger. One thing Kevin was not all that happy with was accommodation as he was booked into a room at the Hagen Park Motel, and while nice, he found it a bit restrictive. Now, I had the Managers house as my residence, a big 3 bedroom house, and just me. So, we did a deal with the Phantom. He issued Kevin with a false room number, 13C I think it was, Kevin moved into my house for the remainder of his time in Mt Hagen, and every time Kevin or I ate or drank at the Hagen Park, we charged it to room 13C in lieu of accommodation. Overall I think we saved the Aus Govt money, but not much I must admit.

When Kevin finished his 3 months posting, he asked if there was anything he could do for me. I had noticed the PNGVR Crest on the outside of what was once the Drill Hall and now part of Council, so I asked if he could “acquire’ it for me. The next Saturday afternoon a Police Land cruiser appeared at my house with 4 Constables with broad grins on their faces, and in the back, the PNGVR Crest.

I had the Crest affixed to the wall of my house in Mt Hagen behind the bar, and it travelled with me when I was transferred back to Lae several years later. Eventually it made its way back to Australia with me and was on display or in storage as circumstances dictated. 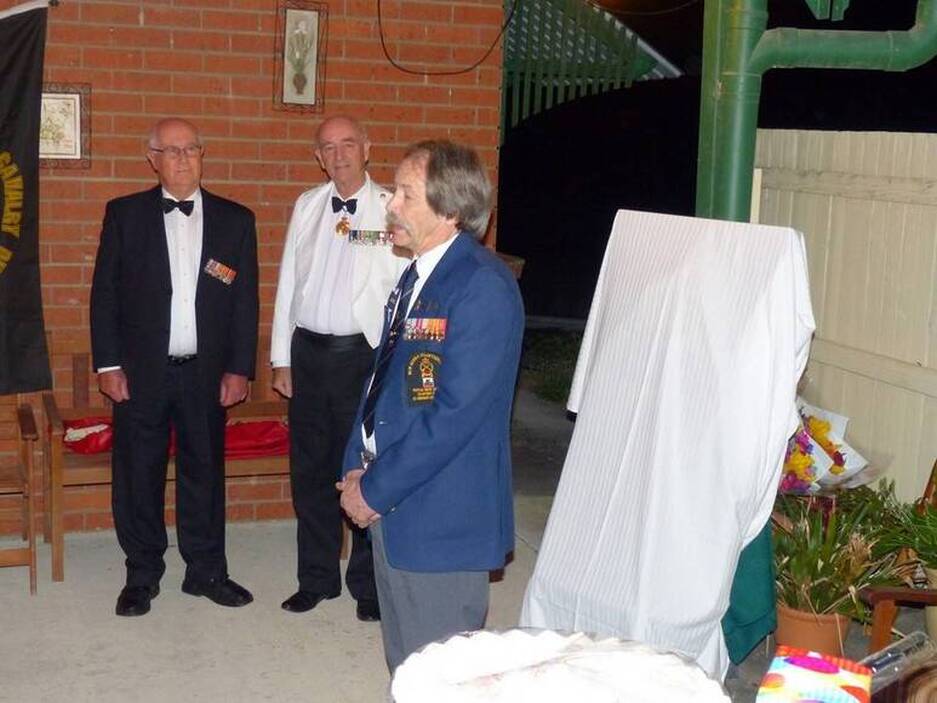 Leigh Eastwood explains to the guests at the Mixed Dining Night his restoration of the Badge.
Leigh had used a background of Kwila, a PNG hardwood, difficult to obtain in Australia.
He presented it to the Association to be held in the Museum at the final Association Dining Night 15 Oct 2016. 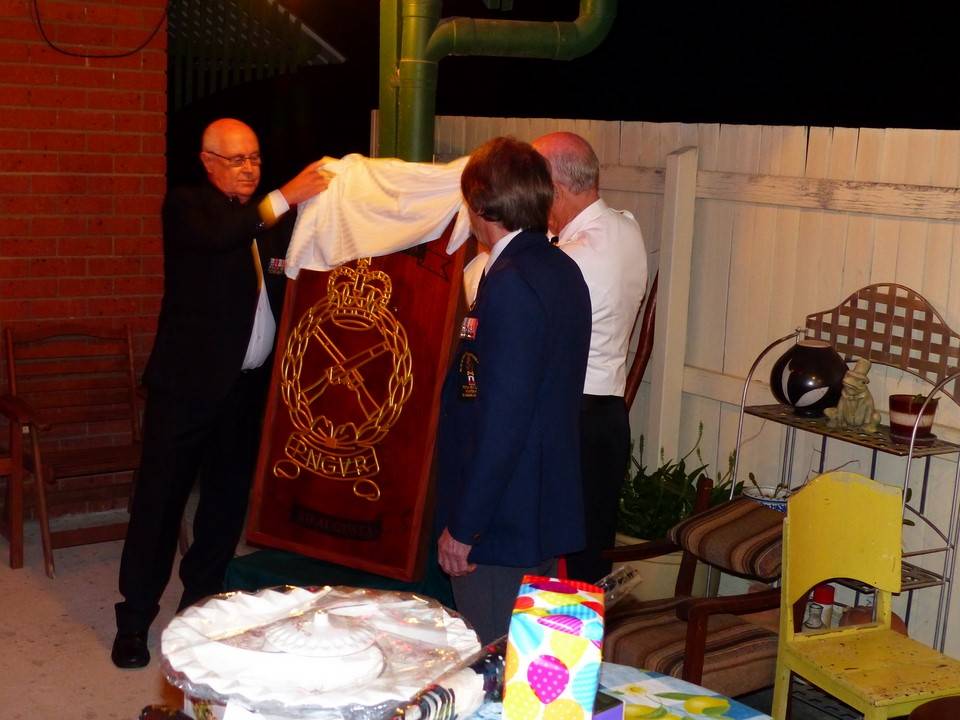 Above and below.    Leigh Eastwood at the unveiling of the Badge with President Phil Ainsworth and Patron Maj Gen John Pearn AO RFD 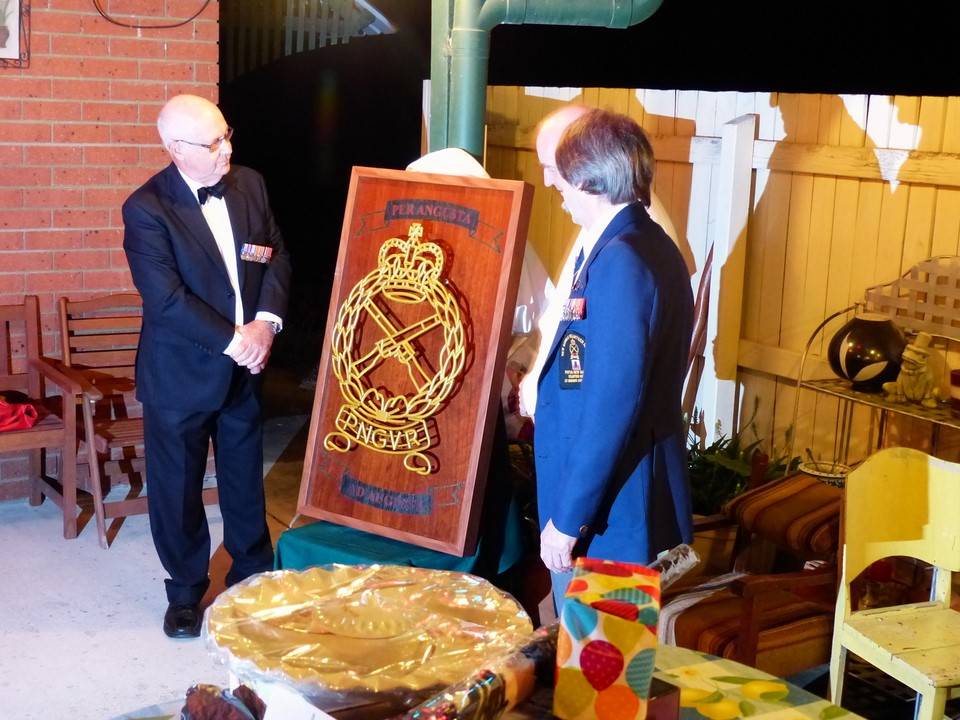 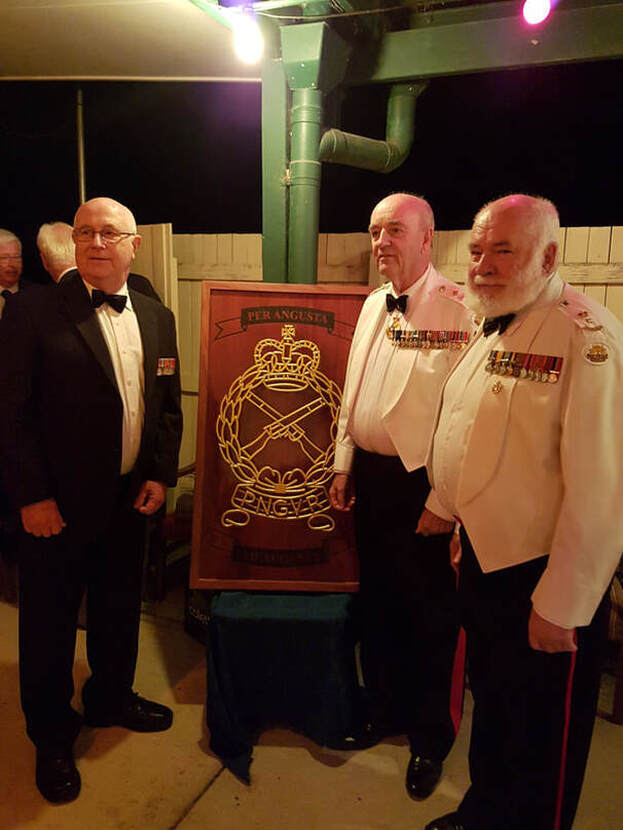 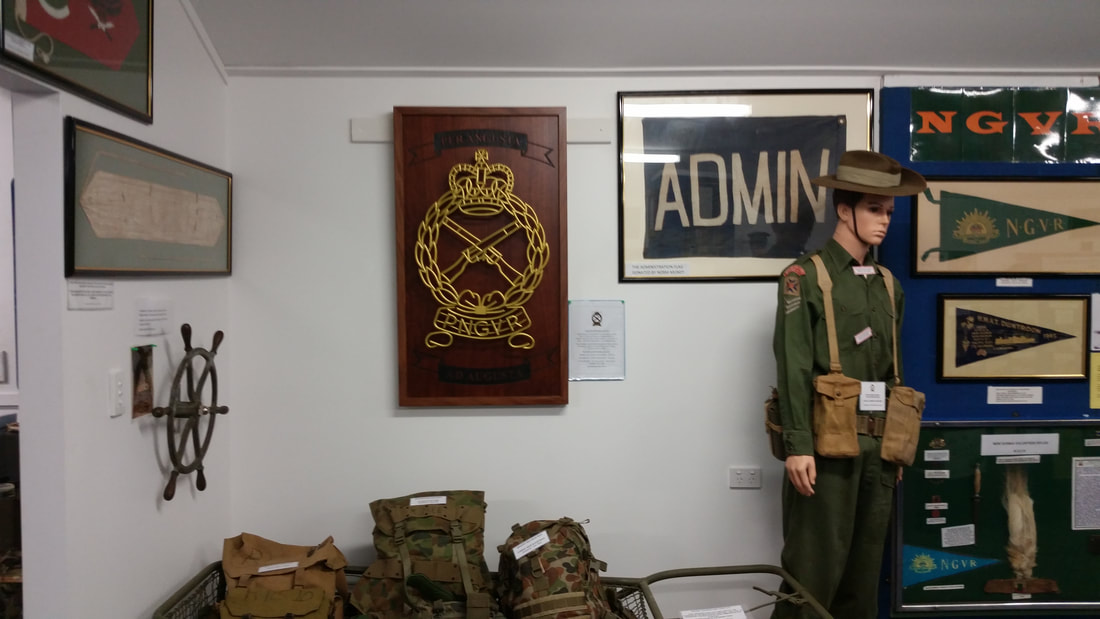 The badge in the museum.  Because of its weight a special board had to be installed to prevent its falling.  The story of how it came from Mt Hagen is beside it.