History of PNGVR -  a collection

This page is available for ex-members to add facts and memories about PNGVR.
A complete history of PNGVR from its formation in 1951 until disbanded in 1973 is covered in the book by Maj Bob Harvey-Hall. Details below. 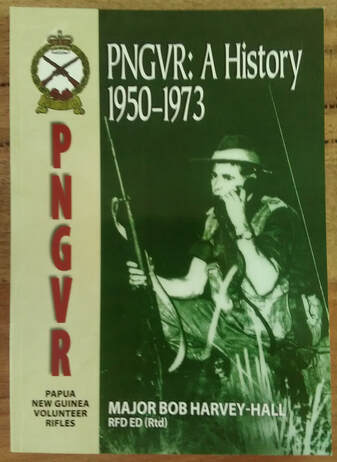 Download File
The speech by Bob Harvey-Hall for the A Coy Reunion on 23 April 2019 provides excellent information about PNGVR.
PNGVR - Its formation.  1951 - 1953.  Read about the trials and tribulations experienced when trying to form PNGVR.  Read the story below.

Further information regarding the formation of PNGVR is told in the attachment below ‘History PNGVR 53-55 by LTCOL Young, the second Commanding Officer

In early 1955 I was appointed Adjutant and Quartermaster PNGVR. At the time the policy was for ARA Officers to remain in PNG for normally no longer than 2 years, and, as I had already been with PIR for 1 year, this meant that 1 was only to spend 12 months in my new appointment. Although for too short, that period with the PNGVR was among the more interesting and enjoyable I experienced during my’ time in the Army.

A notable event a few days before I was to join PNGVR was the destruction by fire of the Battalion Q-Store and armoury at Murray Barracks 1 was given the task of investigating the cause of the fire- ascertaining the details and value of stores destroyed or damaged m the fire., and reporting on umpteen other matters as is normal when conducting such an investigation

Later the RQMS explained that the storeman was well known for his practical jokes and he thought that this was another one of his pranks. This part of the interview did not appear in the final report. We had no easy way of determining exactly what had been destroyed as we had no records of what our stocks had been. Eventually Northern Command, Brisbane provided details of weapons and other important items.

Against this we confirmed our holdings at Rabaul, Lae, Madang and Samarai and arrived at figures of what we should have had in Port Moresby. In the meantime we had sifted through the ashes and recovered those items still serviceable or repairable The remaining stock, and there was a good quantity, were put aside pending disposal instructions We appealed in Routine Orders for those members who had items on loan to provide details - most did but there were a few on leave down south, and were unaware of our problems. Only when they returned did we recover compasses and other controlled stores which had already been written off as destroyed in the fire. Whereas most units report "lost" items, for quite a while we were reporting "finds'’.

One of the training aids we lacked was a decent blackboard (another victim of the fire). One of our members produced plans for a Superboard incorporating boards connected by ropes and pulleys enabling any two boards to be used at one time. We approached the Garrison Engineer and Public Works to have our super board built but were informed it would cost so much that it would have to be included on next year's works budget. The problem was quickly solved by Unit members who had an unscheduled and unpaid weekend parade, and by midday Sunday we had our super blackboard.

It cost nothing, the labour was voluntary, and the materials donated and no questions were asked. A good example of self-help by the PNGVR. Months later when a team of Officers from Northern Command visited PNG to check on admin and Q-Store matters, I was reprimanded because the blackboard had not been formally “approved" and had not been recorded on the assets register - an example of red-tape bureaucracy at its best.

In February 1956, my time in PNG was up and I was posted as Adjutant to a CMF Unit in Adelaide This was a fine Unit with a great history but to me its members seemed more conservative and less self-reliant than those soldiers I’d met in PNGVR It was only then that I realised how unique PNGVR was in the CMF and how fortunate I’d been to have served in it.

Almost forty years later, and after many other appointments including one as the ARA GSO I of a CMF Division, I still hold that opinion of the PNGVR.